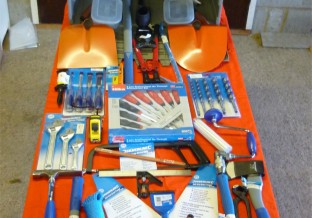 Earlier in 2019 Twickenham upon Thames Rotary purchased from the Rotary charity Trade Aid a special box of tools designed for training young people in the skills of the building trade. We chose the Ahero Vocational Centre in Kenya to be the recipient. Ahero is a small town in Western Kenya not far from Lake Victoria and the Vocational Centre is part of a group of vocational training centres known as KYOPI (Kenya Youth Project Initiative) based around the Homa Bay area.

At the time of their application for help the Vocational Centre had 471 students in training on a variety of courses. Our box was part of a consignment of 10 boxes that were shipped out in a container at the beginning of June and arrived in Mombasa late July. After 9 days the container was released and then transported overland to Homa County for distribution. The boxes reached Ahero in mid August.

Our box was one of the two Builder boxes, the other eight were three Carpenter, two Mechanic and three Tailor boxes. The photo shows some of the students and staff with the boxes just after the delivery.

Trade Aid is a charitable foundation run by the Rotary Club of Grantham Kesteven that helps individuals, families, and businesses to become self-sufficient with the aid of their custom-made Trade Aid Boxes. Since the scheme was started in 2007 it has supplied 1100 Boxes for 200 Projects in 35 Countries.

Rotarian Alan Geeson, who visited our club earlier in the year, said “Trade Aid is now a recognised supplier of training tools and equipment for KYOPI in Kenya and we have an agreement to ship thirty boxes on an annual basis to support three training centres such as Ahero. This year along with Ahero we also supported The Mongoni VCT in Keroka and the Moroka VTC in Kisii who also receive ten boxes each.”