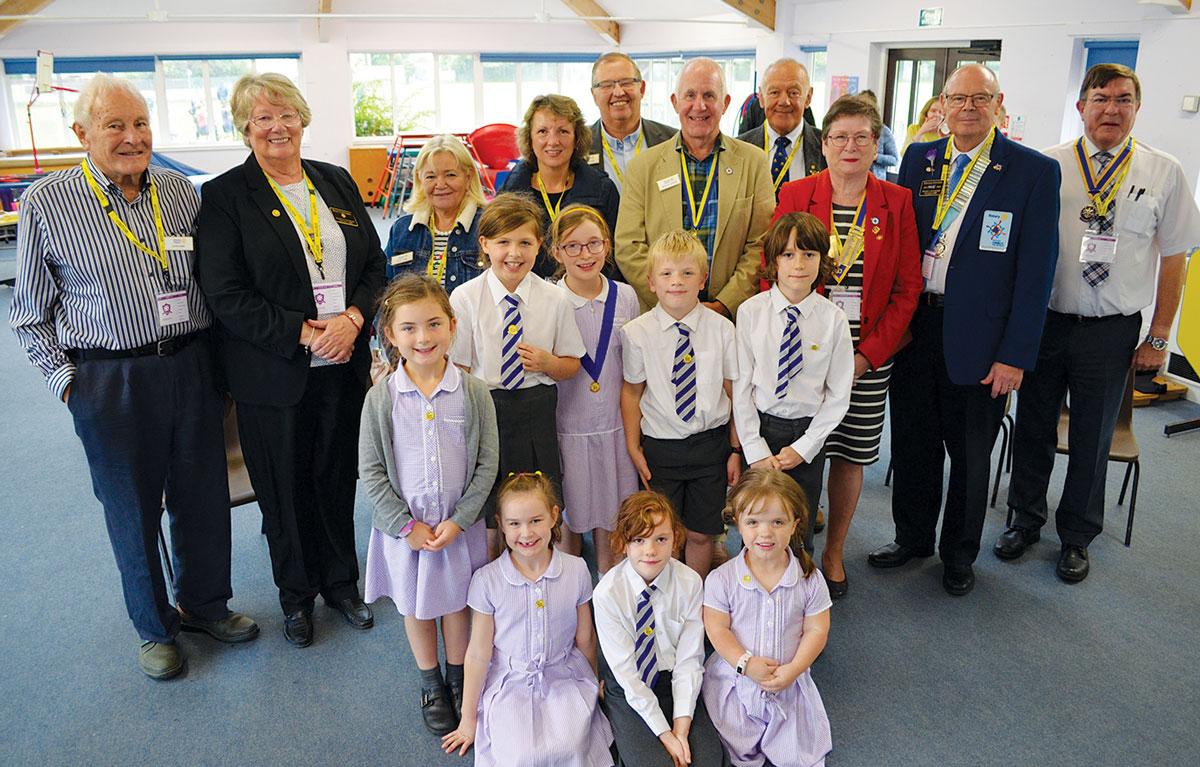 Monday was an exciting day for the Rotary Club Midsomer Norton and Radstock as they welcomed 9 new members. But these were not your normal middle aged business and professional people but all primary school children!

St John’s C of E Primary School in Midsomer Norton had expressed an interest in developing a new after school group in the name of Rotary. The new members of Rotary are known as ‘Rotakids’ an initiative of Rotary of Great Britain and Ireland aimed at 7 to 12 year olds.

The special assembly held in school on Monday (7thOctober) in the presence of Rotary District Governor Dennis Stevens and Midsomer Norton and Radstock Club President Patricia Naish saw the 9 children in the Rotakids club officially recognised as being part of the Rotary family. The ceremony held in front of the whole school and the Rotakids families saw each individual awarded a certificate of membership. The school also received a certificate of recognition from Rotary of Great Britain and Ireland.

All the children made the Rotakids pledge which is:

‘As a Rotakid I endeavour

to be fair to all,

to serve my community and

to show respect for others’

Rotakids meetings run in a similar way to a Rotary meeting with members elected as President, Vice President, Secretary and Treasurer. They have even appointed a Press Officer.  The group are looking forward to coming up with lots of ideas to help other people. The club will meet once a week to discuss and plan projects. Their first projects are a local litter pick and hopefully engaging with a local residential home to play games with the residents. They will also be  planning fundraising events to help their local community and with national and international projects.

Rotarian Martin Carter the Rotary clubs ‘Rotakids’ mentor said, “ When I first met with the children I was really impressed with their enthusiasm and ideas but what really struck me was why they wanted to be Rotakids. They told me they wanted to; ”Help others”, make a difference in their communities” and “raise some money - and have fun”! This is exactly what all Rotarians across the World aim to do with our motto of ‘Service above Self’.

Evie, St John’s Rotakids President said “ I relish the opportunity to work with the Rotary club and my friends to achieve great projects”.

Rotary are a group of like minded individuals who are committed to working on various projects in our community and overseas. We have a passion to change lives and surroundings for the better enjoyment of all.

Rotary Midsomer Norton & Radstock raises money each year to support our Charity Fund. We do this through running various events, giving our time, and seeking support within our community

Learn about some of the rewards of being a Rotarian

JOIN US AND HELP MAKE A DIFFERENCE

Supporting Our Work In The Community & Internationally