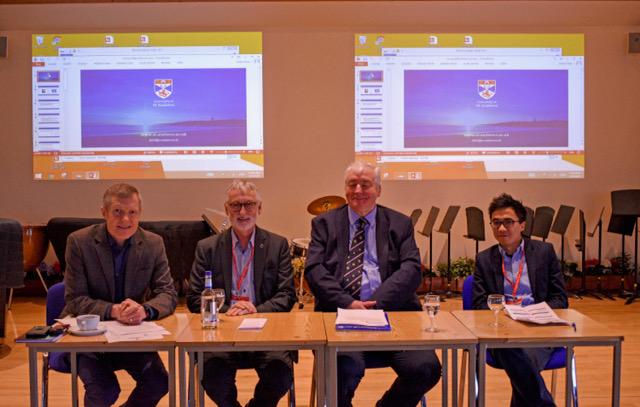 Willie Rennie is Leader of the Liberal Democrats in the Scottish Parliment.  Educated at Bell Baxter in Cupar and a keen runner.  His father was a stalwart of Howe of Fife Rotary Club and had links with our St Andrews Club by hosting librarians from Namibia.

Peter Peacock is a former Scottish Government Minister of Education.  He represented the Highlands and Islands.  He has acted as policy director for Community Land Scotland.  He is the brother of one of our most involved members.

Dr K M Leung of the Department of Divinity at the University of St Andrews.

Dr Leung spoke on liberal political values in the West, the rise of China as an international economic and political force and the proposition of the ‘China Model’ as an alternative to Western values and expectation.

Dr Leung highlighted the limited development of Democratic institutions in Hong Kong under the former BritishColonial Administration. The "One Country Two Systems" administration under the post handover administration of the Hong Kong government is under the watchful eye of Beijing.
The rise of frustration in the population resulted in initially the students umbrella revolution of 2014.Now how this has led on to the more recent demonstrations by the wider population as a result of legislation proposed by the Hong Kong Government which would have enabled Hong Kong citizens to be taken to the PRC to face charges in court.

Peter Peacock spoke on Democracy in Crisis? He spoke of the differences between representative democracy and participative democracy together with the use of referenda. Their use in the United Kingdom, has been limited and for only major contentious issues with cause of much dissatisfaction. He compared this with Switzerland where referenda are a regular feature of government at both local and national level and for items which may only impact a small regional population within individual cantons.
He posed a number of questions for the audience to consider.

Willie Rennie spoke on how language has enabled apparent outsiders to achieve significant political
power, quoting examples such as Donald Trump, the reality show host and developer, who
used the issue of immigration and a wall on the Mexico border to further his political aims in theUnited States,

In the United Kingdom, Jeremy Corbyn who as a backbencher in parliament voted against his own party on some 700 occasions, but who then went on to become party leader and build the largest political party support in Europe.

Closer to home Alex Salmond, (a graduate of St. Andrews university) used the subject of Scottish Independence to build support for the Scottish Nationalist Party and his role as party leader.

The event took a ‘Question time’ format with questions to speakers after their presentations
unfortunately cut short due to pressures of time.

The Rotary Club of St.Andrews is very grateful to St.Leonards School for the provision of an
excellent venue for this event and to both school pupils and staff for supporting the event.

The speakers generated real discussion amongst the pupils