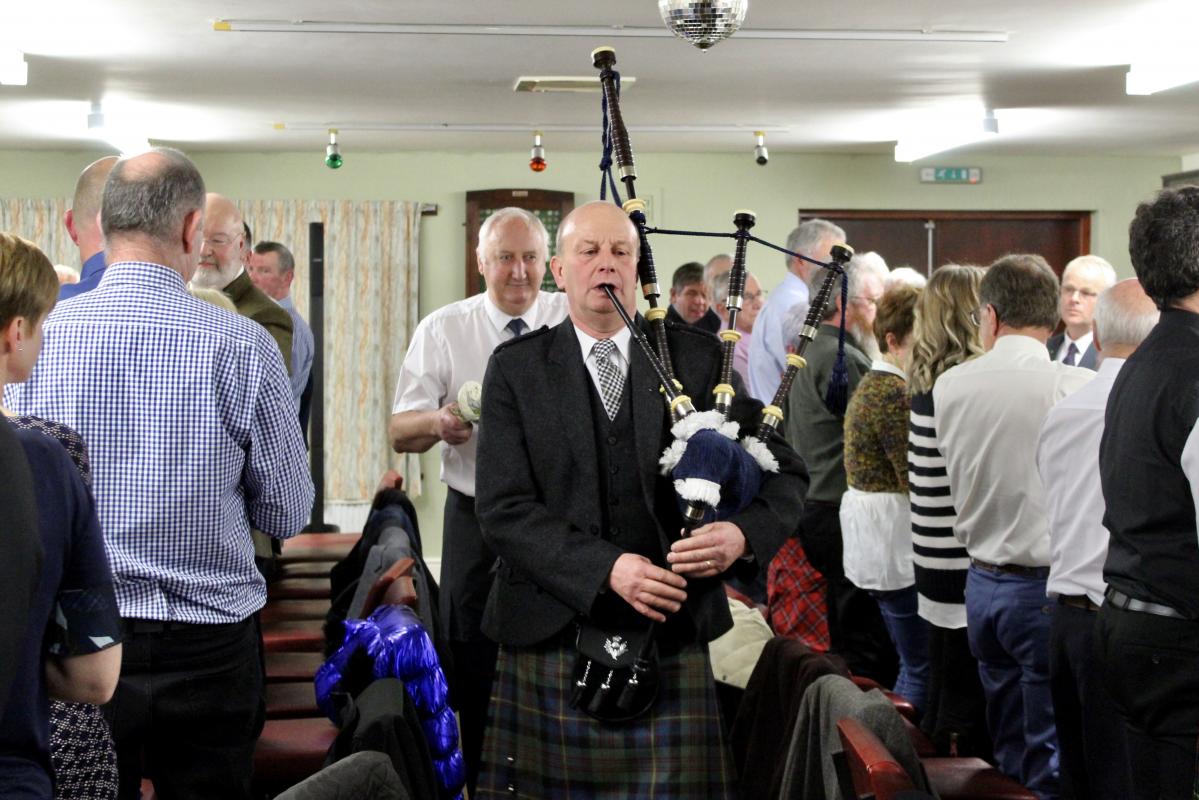 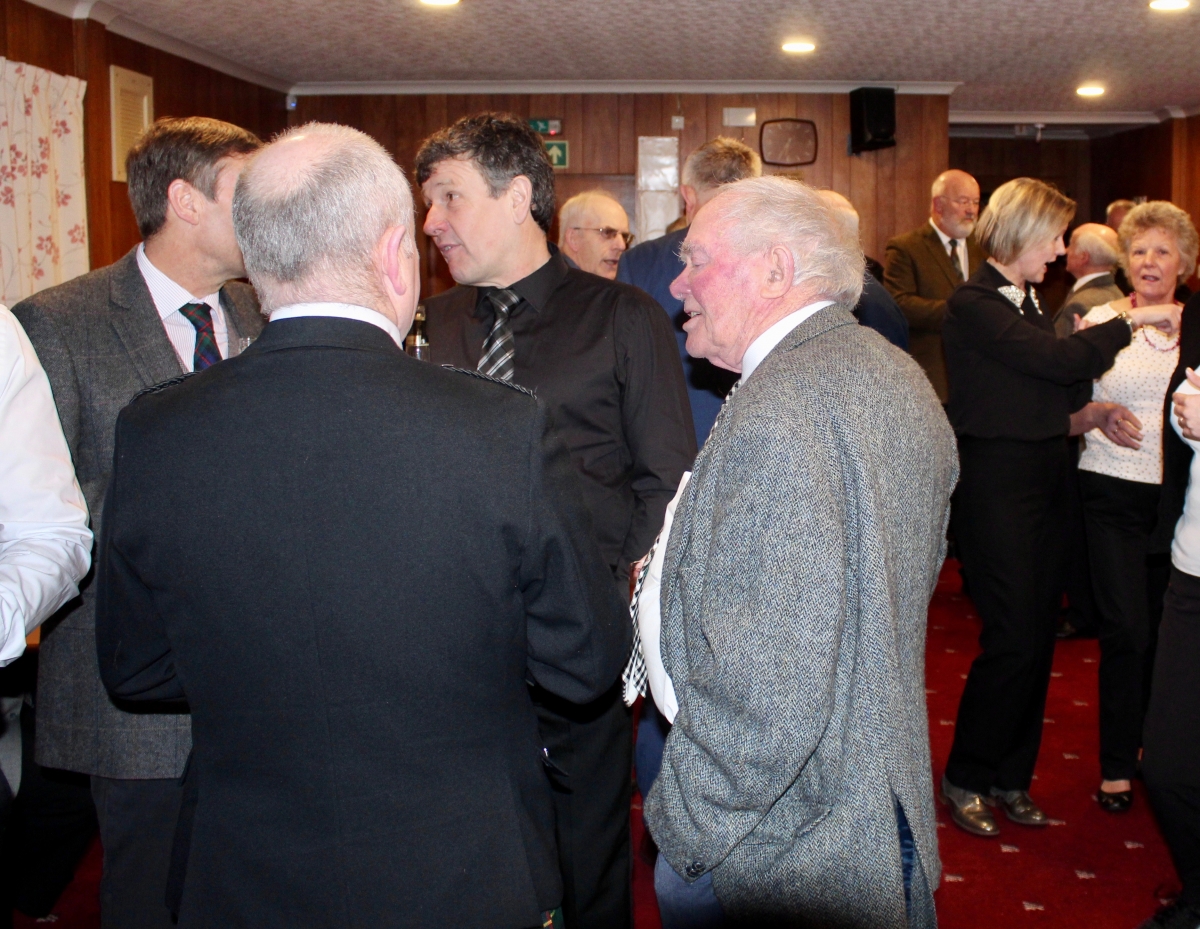 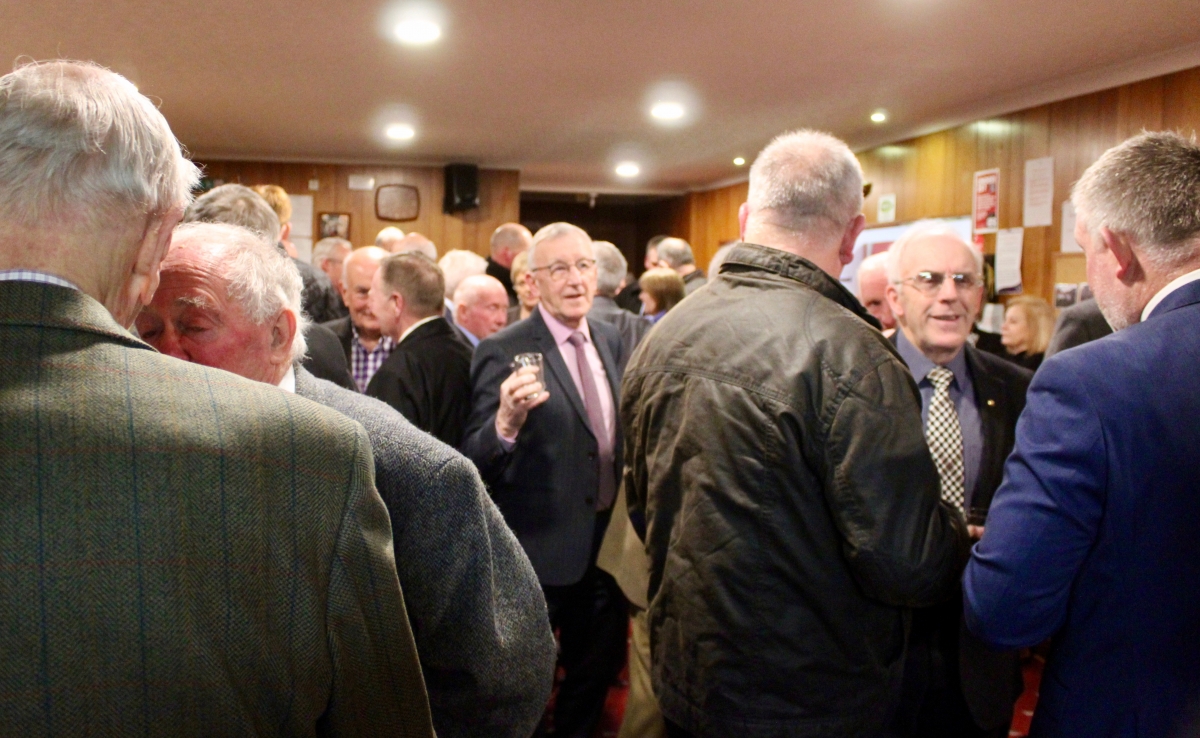 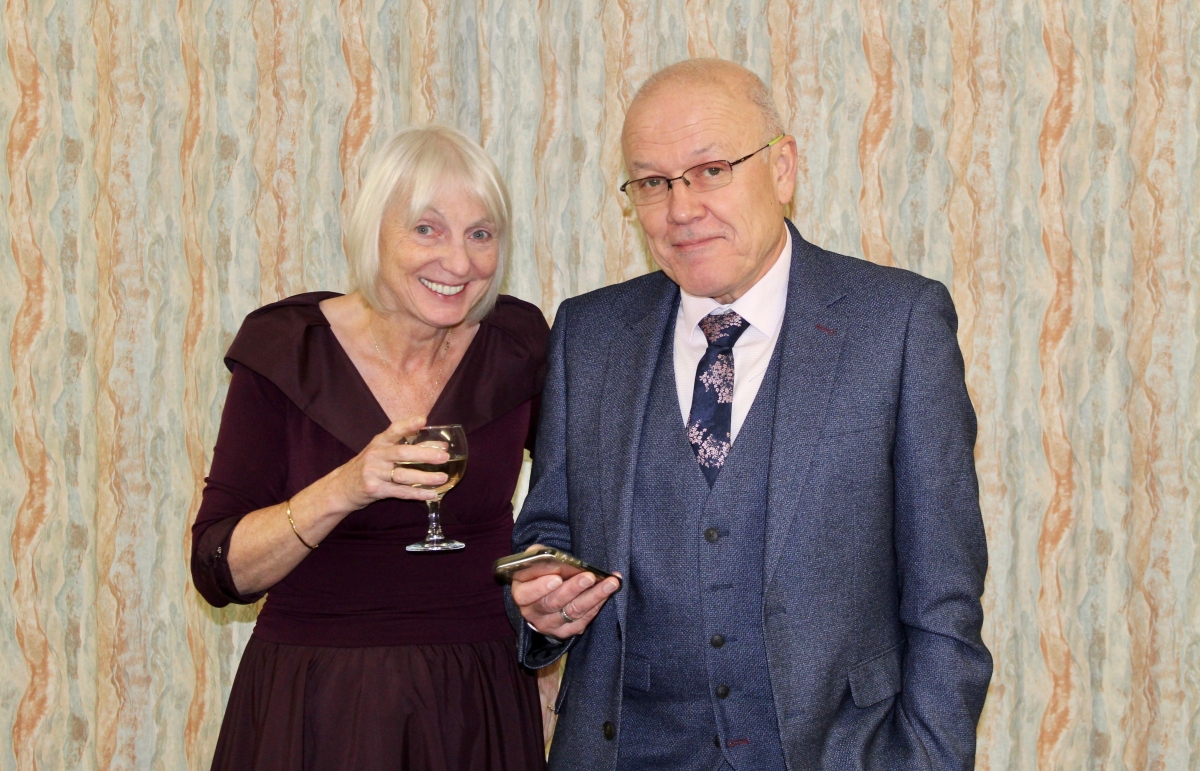 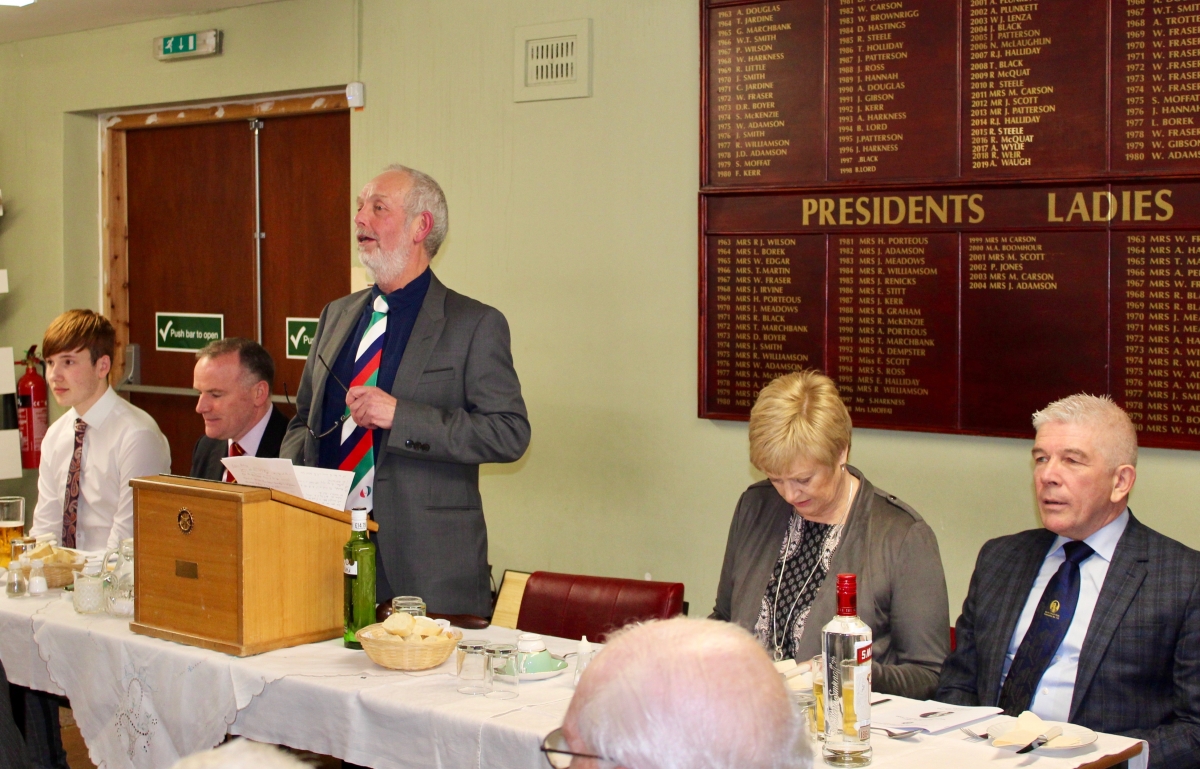 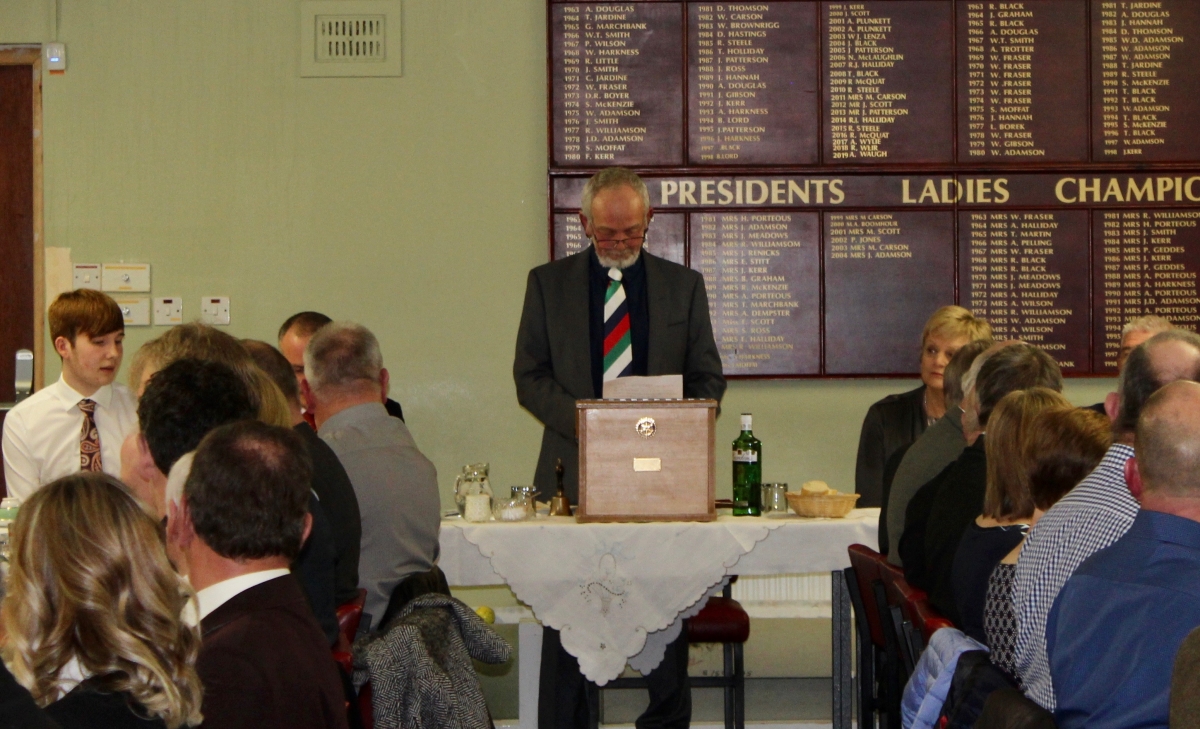 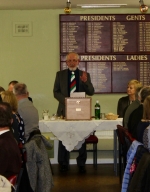 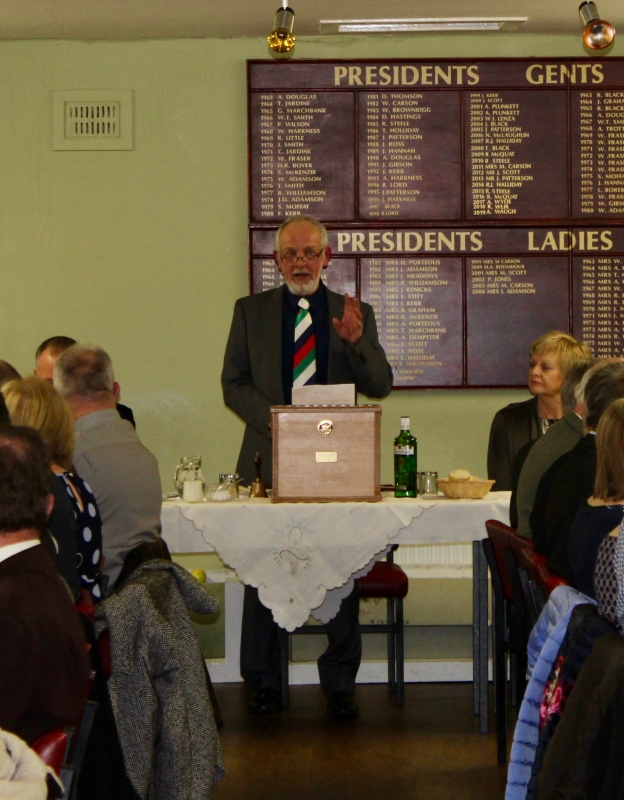 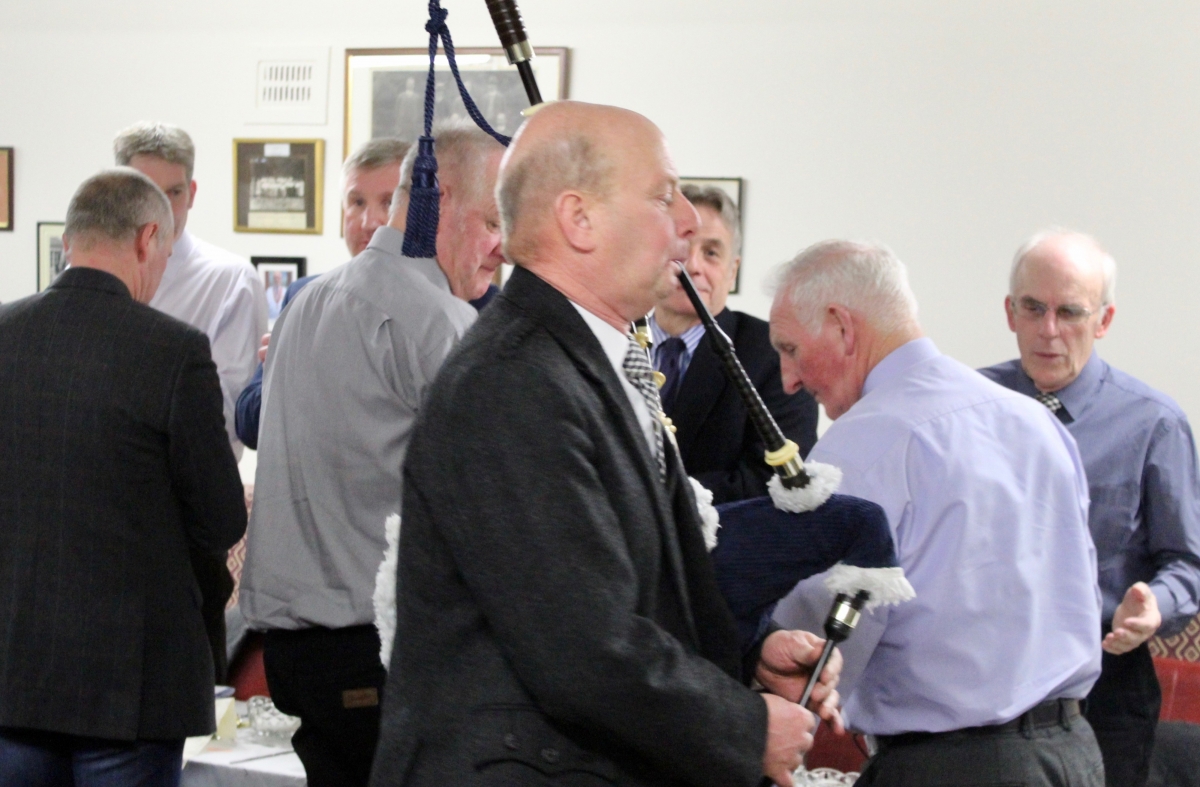 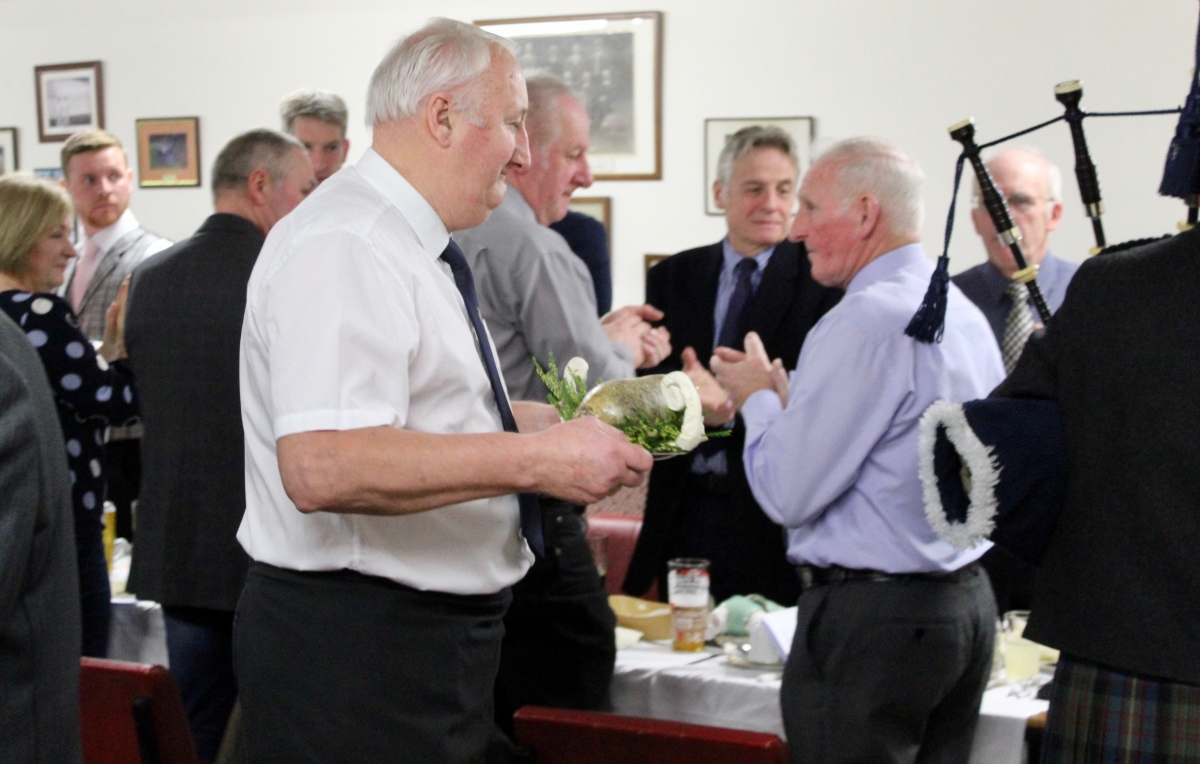 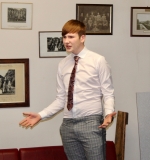 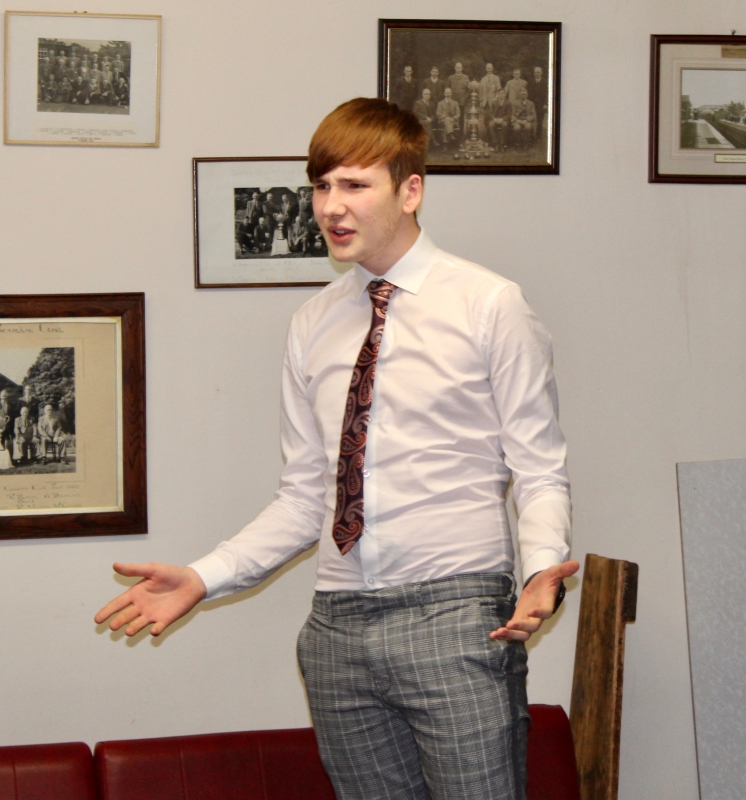 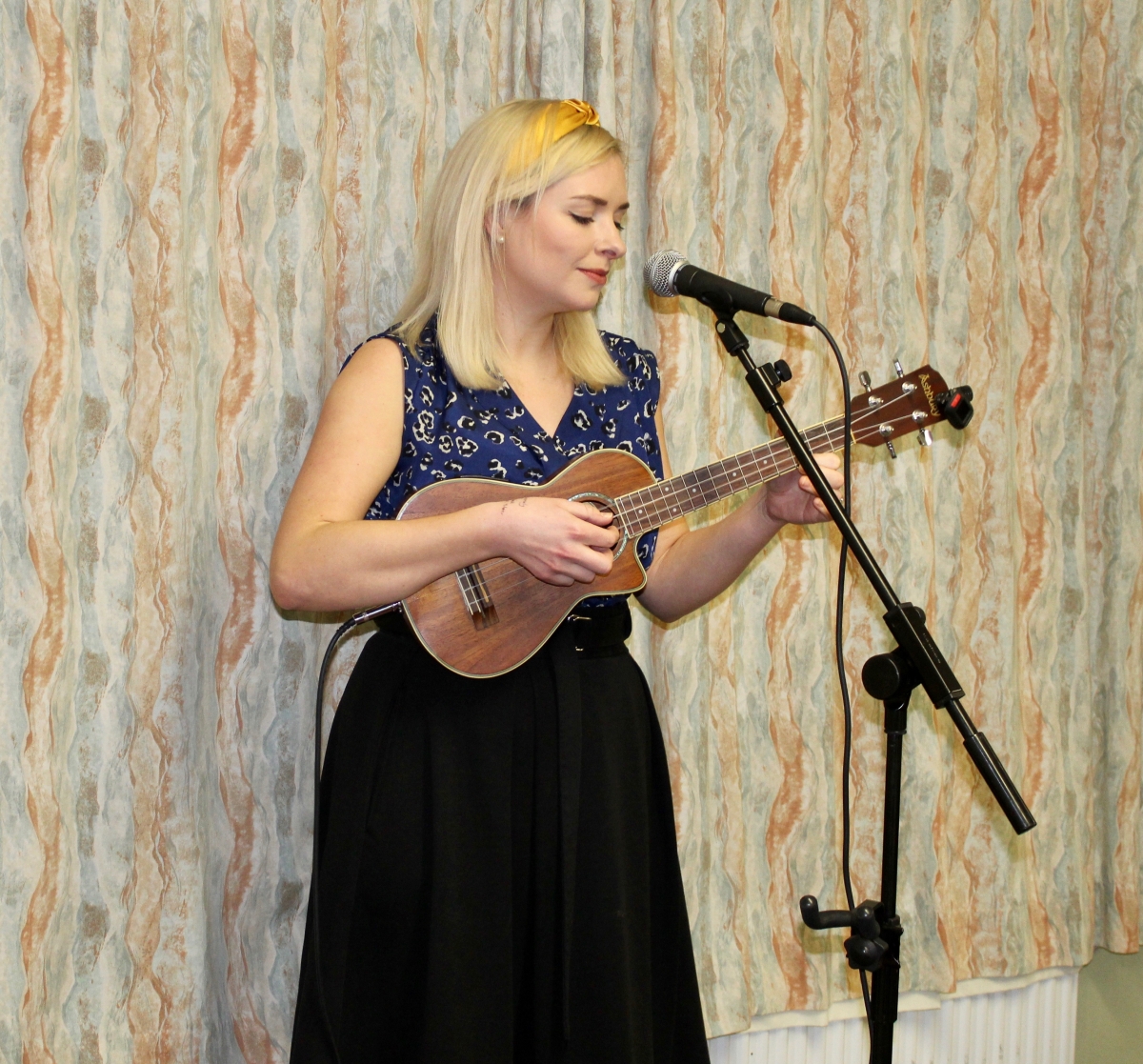 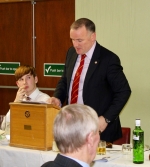 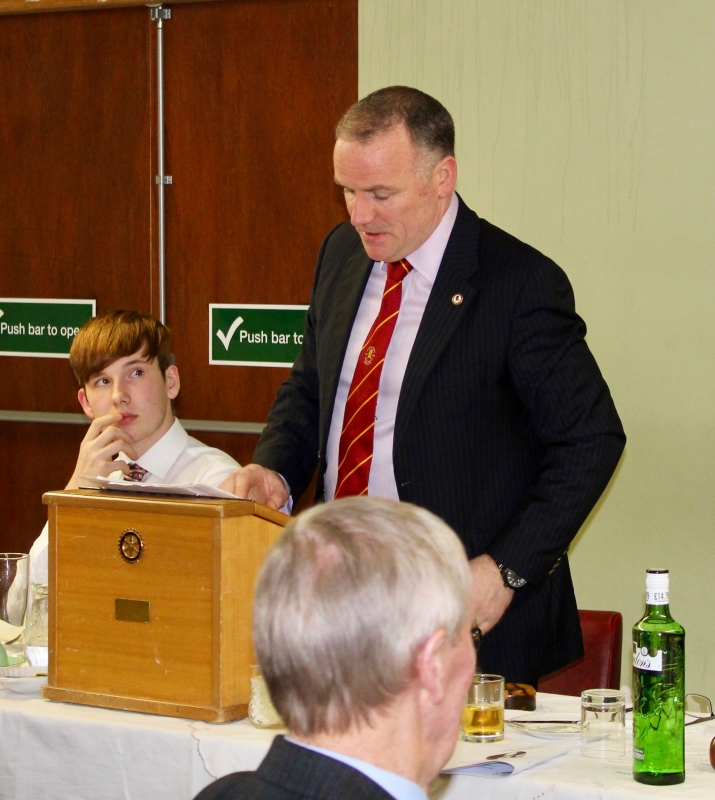 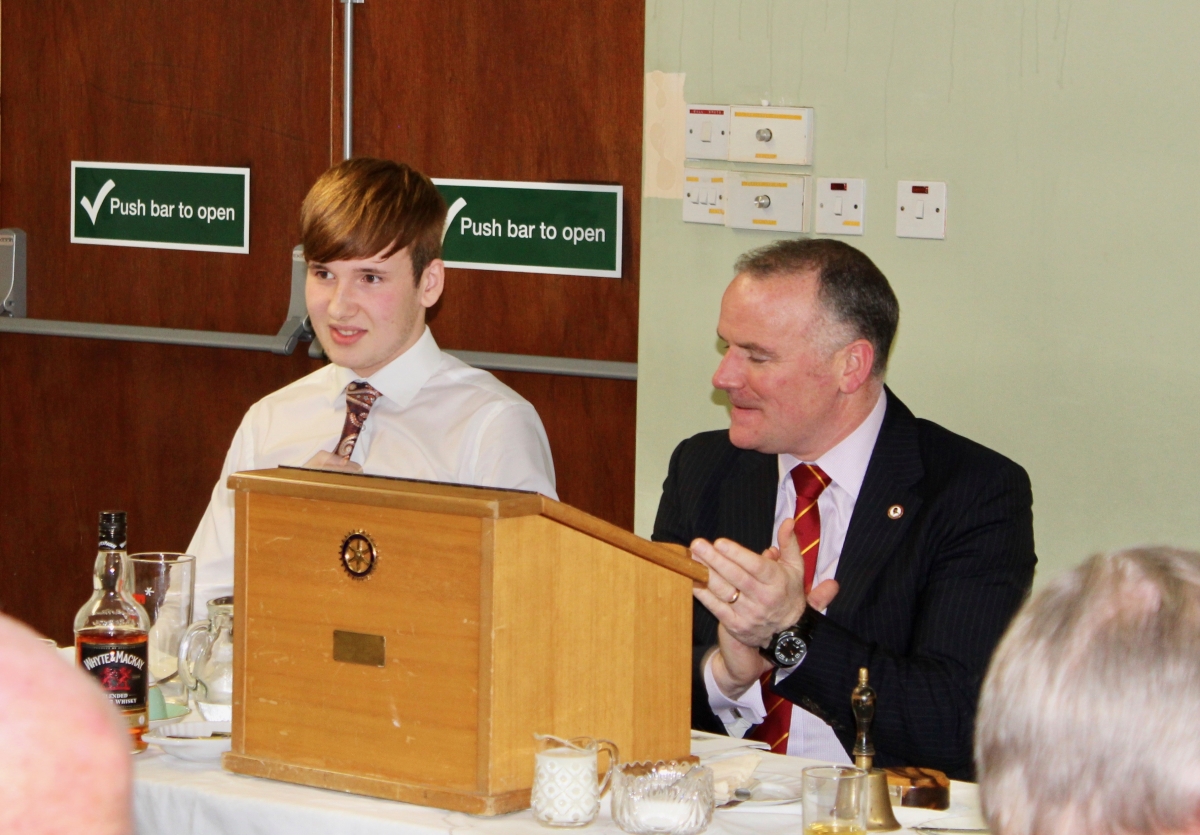 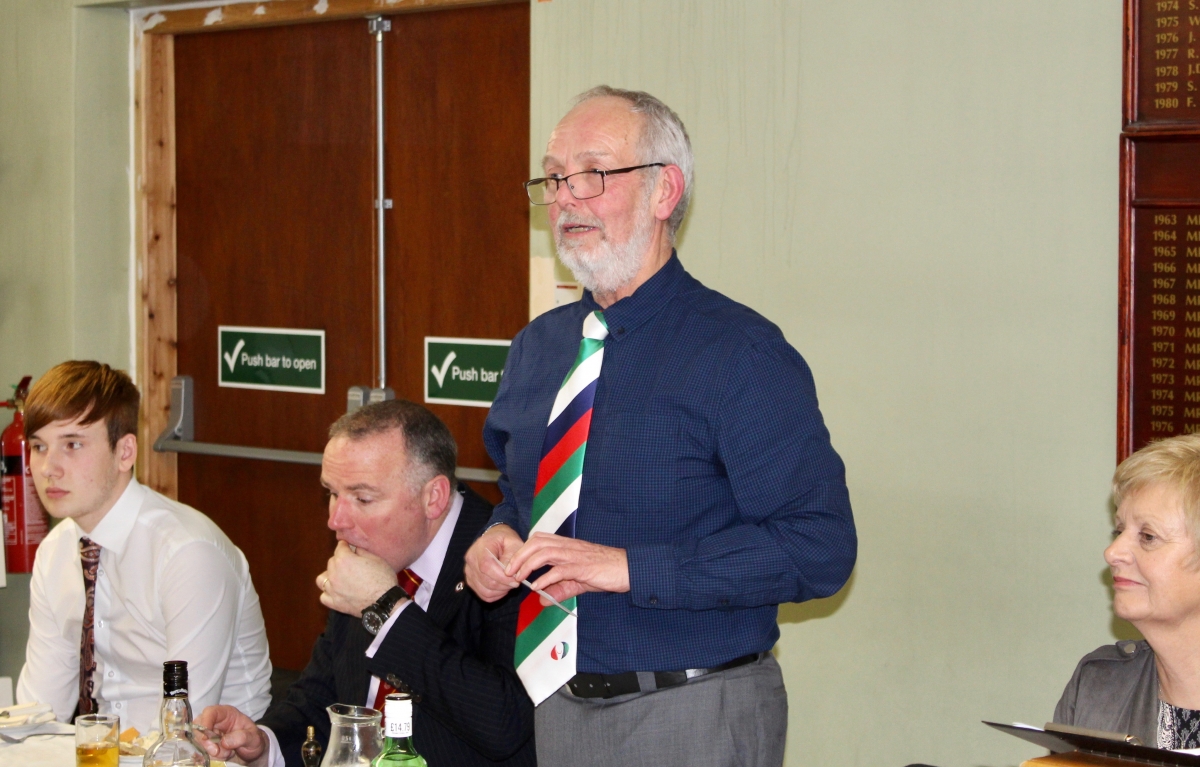 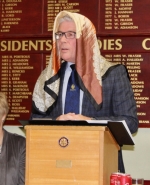 Recently, Wednesday 15th January The Rotary Club of Thornhill and District hosted their Annual Burns Supper at Thornhill Bowling Club, East Morton Street, Thornhill. Where on the night seventy six members and guests gathered to celebrate the Bard, Club Secretary Stewart Lee as chairman started the evenings proceedings with Selkirk Grace and by welcoming everyone, introducing the guests and promising an entertaining night, he was not wrong.

The Haggis was piped in by Wullie Prentice assisted by the Bowling Club's president Alec Waugh. Wullie is best known, both locally and further afield for his skills playing the bag pipes. He was the first pupil at Wallace Hall Academy to practice the pipes for ‘O’ level music. The Rotary Club has benefited year on year from Wullie's skills on the pipes, as he has been piping in the Haggis at their Annual Burns Supper for 40 years and more. Wullie was also awarded their annual community service award in 2019.

Addressing of the Haggis along with the readings were performed by seventeen year old Troy Barbour. Troy winner of Scotland’s Young Burnsian 2015 and best verse speaker in Scotland 2018 after reciting an extract from Death And Dr Hornbrook. Troy was first introduced to Burns at Sanquhar Primary School by classroom assistant Lynn Forsyth and he is now actually judging school competitions.

Performing the Immortal Memory was Stephen Hastie. Stephen who worked in the Dumfries prison service for 24 years and originally from New Cumnock now lives in Sanquhar and is currently the Secretary of The Black Joan Burns Club in Sanquhar. Burns called the town "Black Joan" in his ballad "Five Carlins" in which he represented the local burghs as characters.

Maureen McKerrow, past President of Dumfries Rotary Club presented the Reply from the Lassies while giving Scot a run for his money. Maureen is well known on the Burns circuit and until recently has run the Globe Inn in Dumfries since 1977.

Robert Burns first visited The Globe Inn in 1787 after writing the Kilmarnock Edition. The oldest pub in Dumfries dates back to 1610 and became Burns’ favourite “howff” when he lived in the region between 1788 and his death in 1796.

The entertainment for the evening was performed by Claire Hastings. Claire a Scottish folksinger, songwriter and ukulele player earned the prestigious title of 2015 BBC Radio Scotland's Young Traditional Musician of the Year, she has released two album’s her first ‘Between River and Railway’ released in 2016 to critical acclaim, followed by her much awaited second album ‘Those Who Roam’,

Claire has toured successfully in the UK, Europe and New Zealand as a solo artist and with The Claire Hastings Band, and has performed at international festivals including Festival Interceltique de Lorient and Celtic Connections. Standout performances also include BBC Proms in the Park with the Scottish Symphony Orchestra, singing alongside Lulu, Jamie Cullum and Deacon Blue at Glasgow's City Halls and collaborating with soul singer Joss Stone for a video.

Club President Michael Keene concluded the evening by thanking each and everyone concerned, from the guest speakers Troy, Stephen, Scot, and Maureen for their excellent professional readings and amusing renditions. Claire for her perfect music and vocals. Wullie for his excellent piping skills. Thornhill Bowling Club and their staff for the superb meal and service. Stewart for taking the chair and holding the evening together. Rotarians Brian Hunter, Gordon Lawson, Trevor Dykes and their team for organising this popular event year after year, and last but not least all the guests who came along to support and make it a most enjoyable, funny and entertaining evening, now looking forward to the 2021 celebration to the Bard.

The full evenings program can be viewed below: