During the CoronaVirus lockdown, what many of us got up to... including suspicious activity attracting the attention of our Cotswold Police Force in Arlington Row, Bibury! 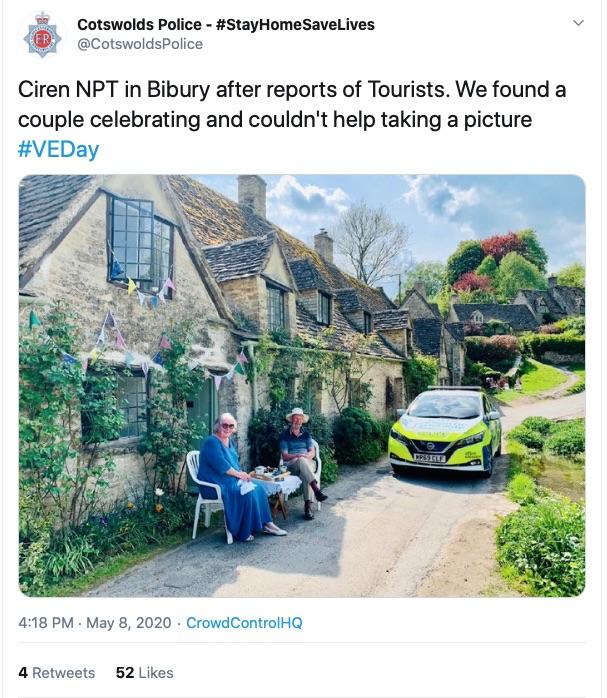 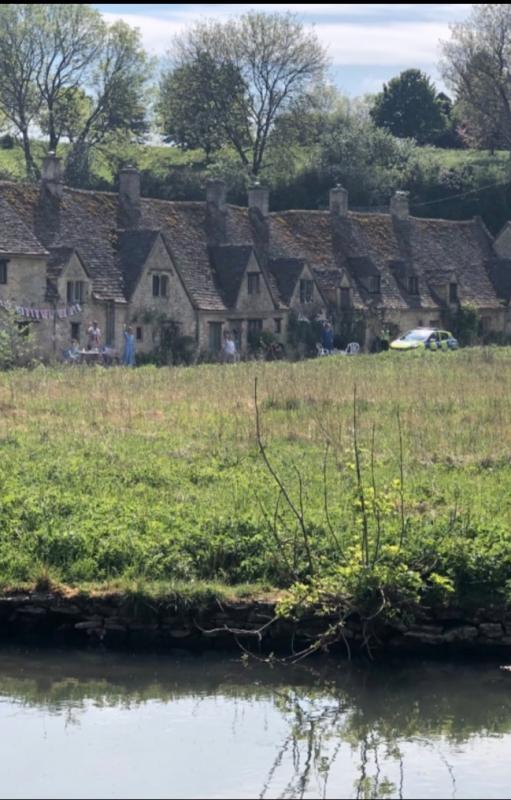 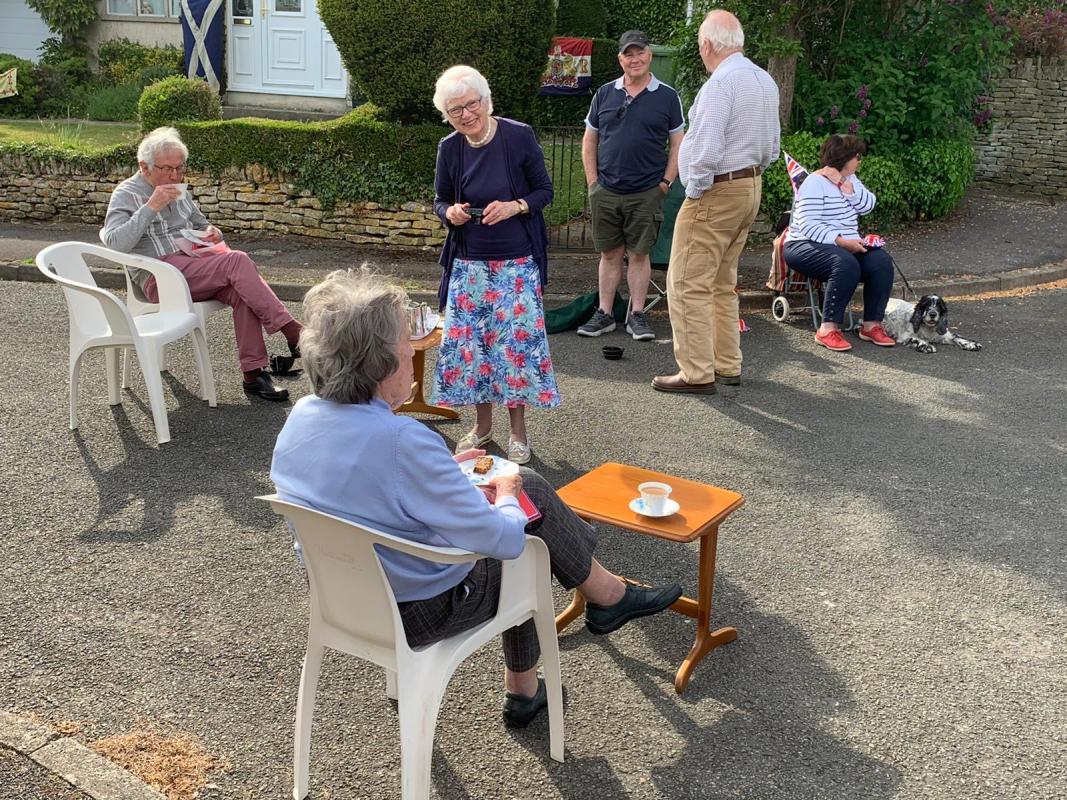 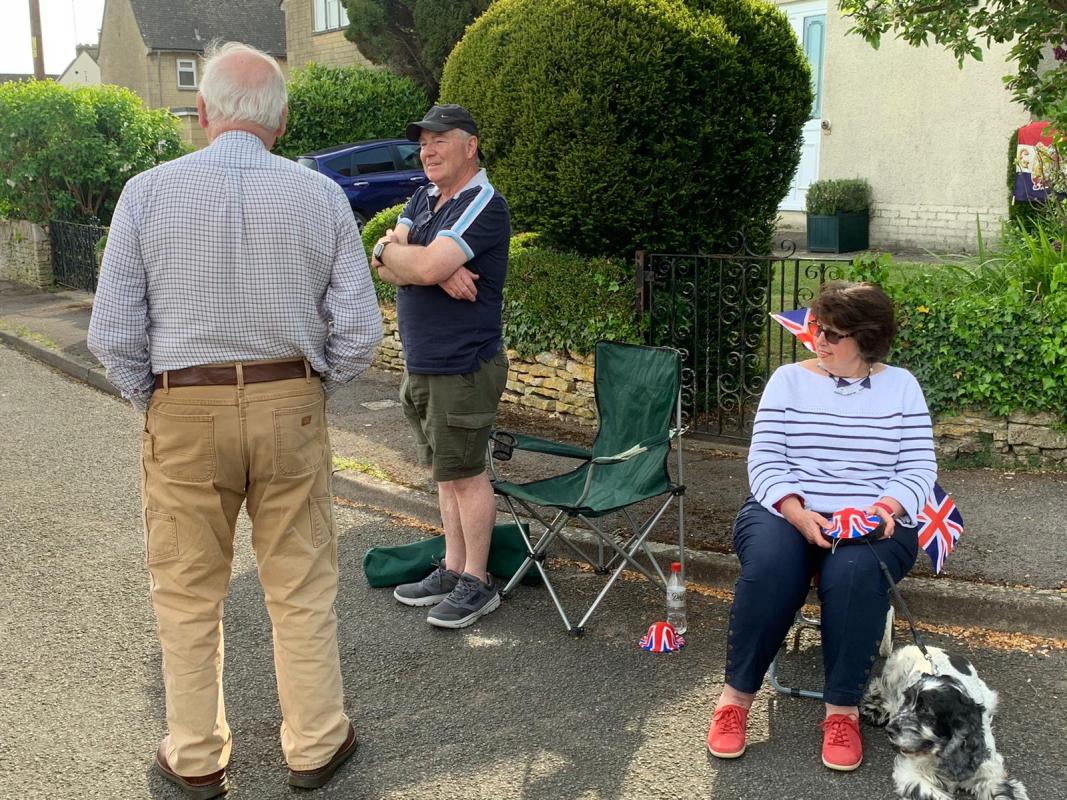 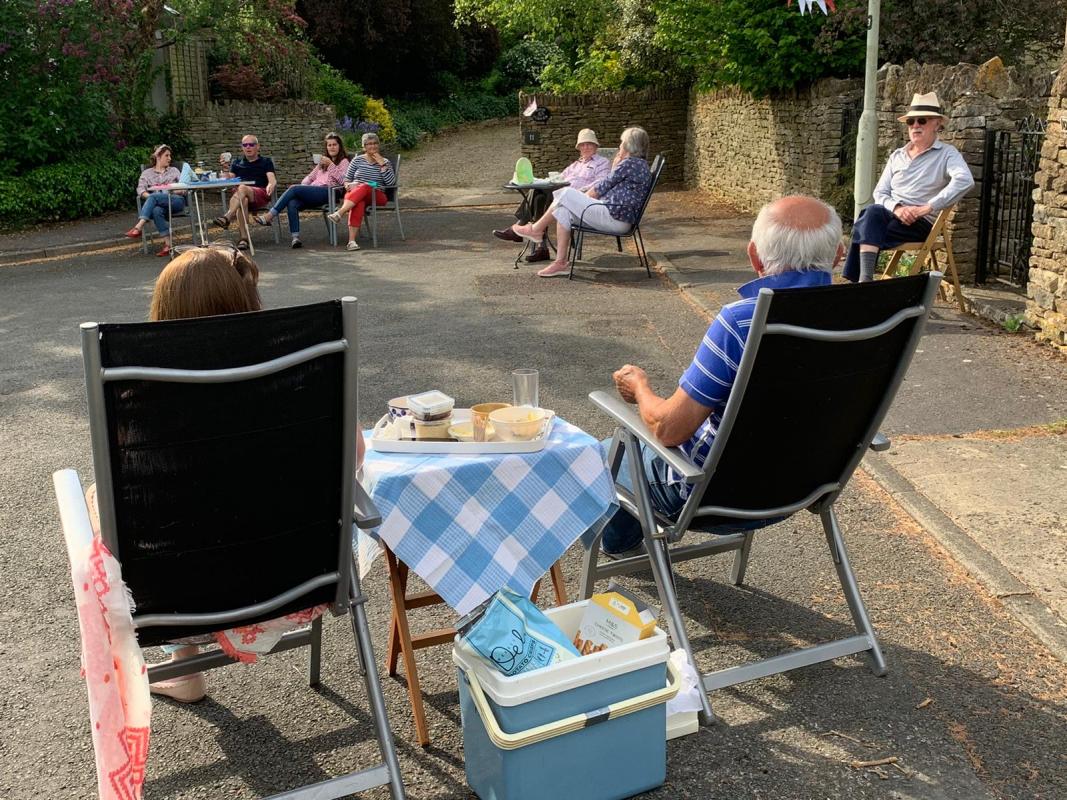 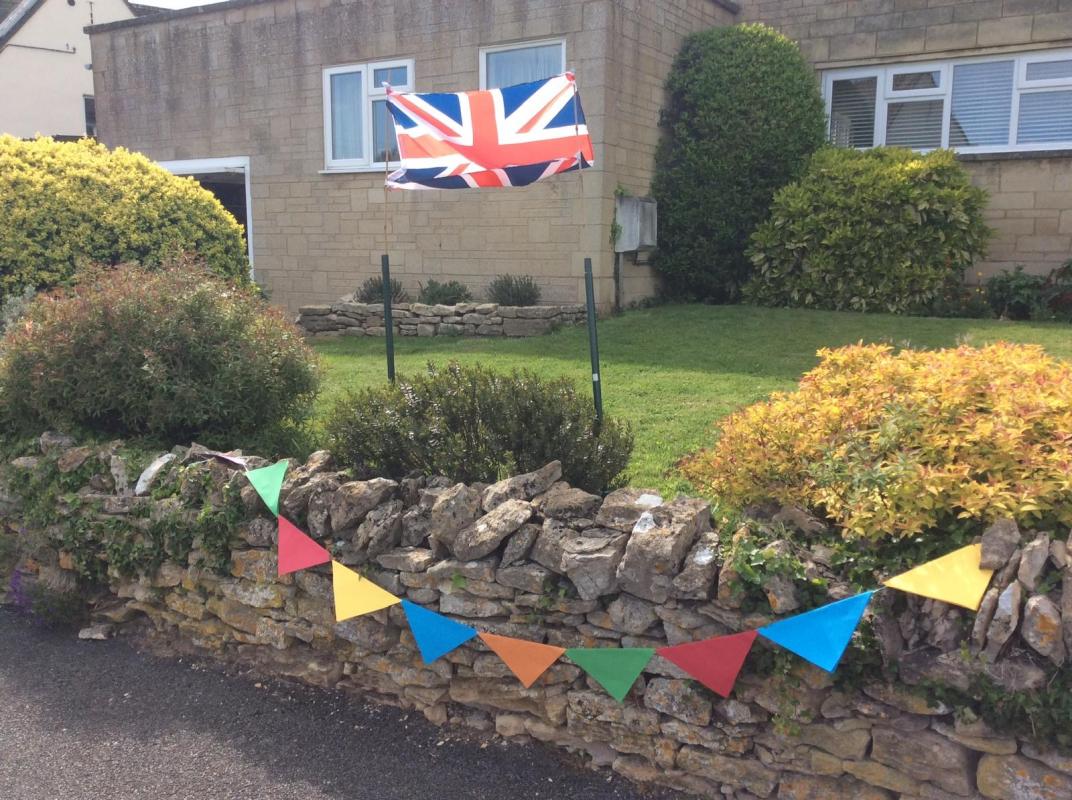 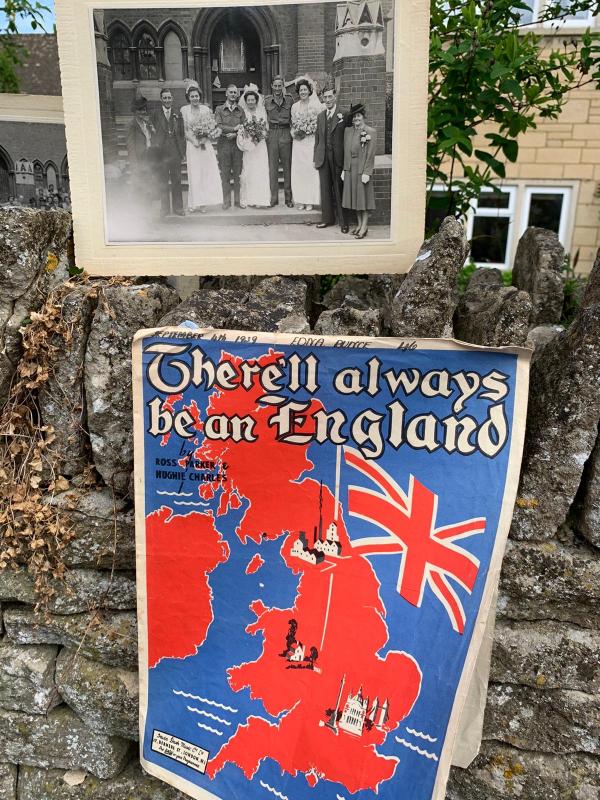 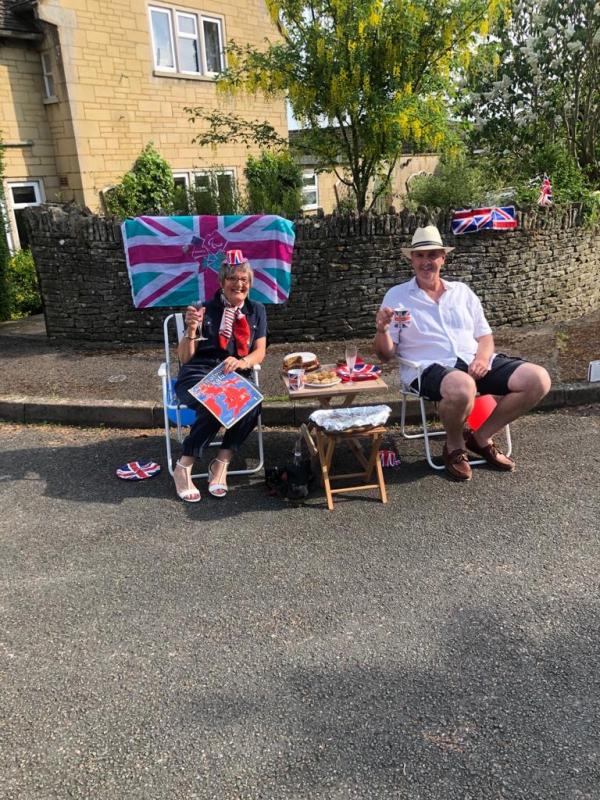 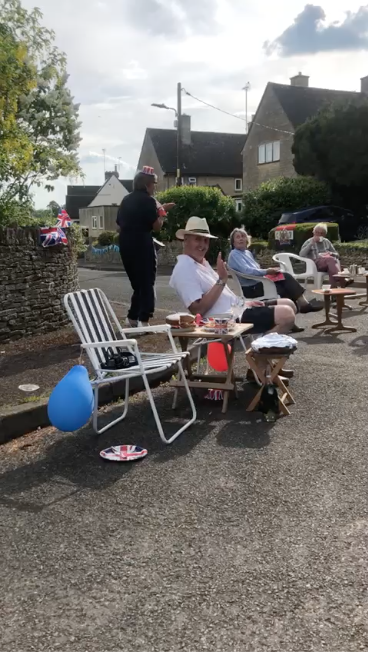 Member Brian & Jill Skarda said that with reference to the attached photo, on the Cotswold Police Twitter feed, I wanted to let you know, it's not true we were arrested! If you look at the Twitter site you can see the original, when the Police drove down to join us for our (distanced) 'tea party' at 3pm (which eventually went on for 4 hours) - when we turned to something stronger...

Also in St John's Close, Stratton, Cirencester resident Reverand Jan Moore helped to organise immediate local neighbours who have a long established history of normal-time gatherings.... however in her words, "the the Photos don't quite convey the level of convviviality but probably do demonstrate that social distancing is an odd context for a party!!"

Memories of THE VE DAY by Alan Welsford:

I can remember the start of the war, too. No longer did the school bell ring out from Staple Hill Council School: no bananas to buy for lunch on the way to school – always with your gas mask at the ready, of course. Then a dash – well we weren’t allowed to dash – to the shelters as the Gerry (NAZIS were the ruling Party Members, of course) bombers flew over on their way to bomb Bristol Aircraft Company at Filton or following the railway line into Bristol centre… more often a night-time awakening to go into the Anderson shelter in the back garden for a few hours until the All-clear siren sounded …. Etc etc etc.
After D-day, listening to Into Battle just before bed and putting flags on the wall map to mark the towns liberated and see the progress to Berlin.
Summer meant Holidays at Home – not quite as restrictive as Lockdown as we could go to the “seaside”  - Weston sand spread alongside the Pond in Page Park.
VE Day was marked by a Street Party – no need to get permission to close the road to traffic: there wasn’t any. A spread of cakes and jellies and – for me – the disliked blancmange. Still no bananas or oranges and only a few ozs of sweets, of course. But still a party.
Tame up to Cynthia in Liverpool with Block busters landing nearby!

Rose 8.00am for Breakfast. Leave for golf on Minchinhampton common with Daddy Bar and Theo. Play one round Daddy 115 Theo 136 Alan 188 but I beat them both on the 2th with a six and tied with them both on the 1st Hole/ Bar acted as scorer. Highest score 16. Came home with one ball more than we left with. Catch bus into Stroud arrived home at 2.30pm. Thirsty and hungry.

The rest of the day was uneventful.

Playing golf on the common was difficult. Big concrete post everywhere to stop German planes landing, and daisies flowering all over the fairways to make finding the balls a problem. When I gave up golf at 25 the only thing I was any good at was finding the balls.