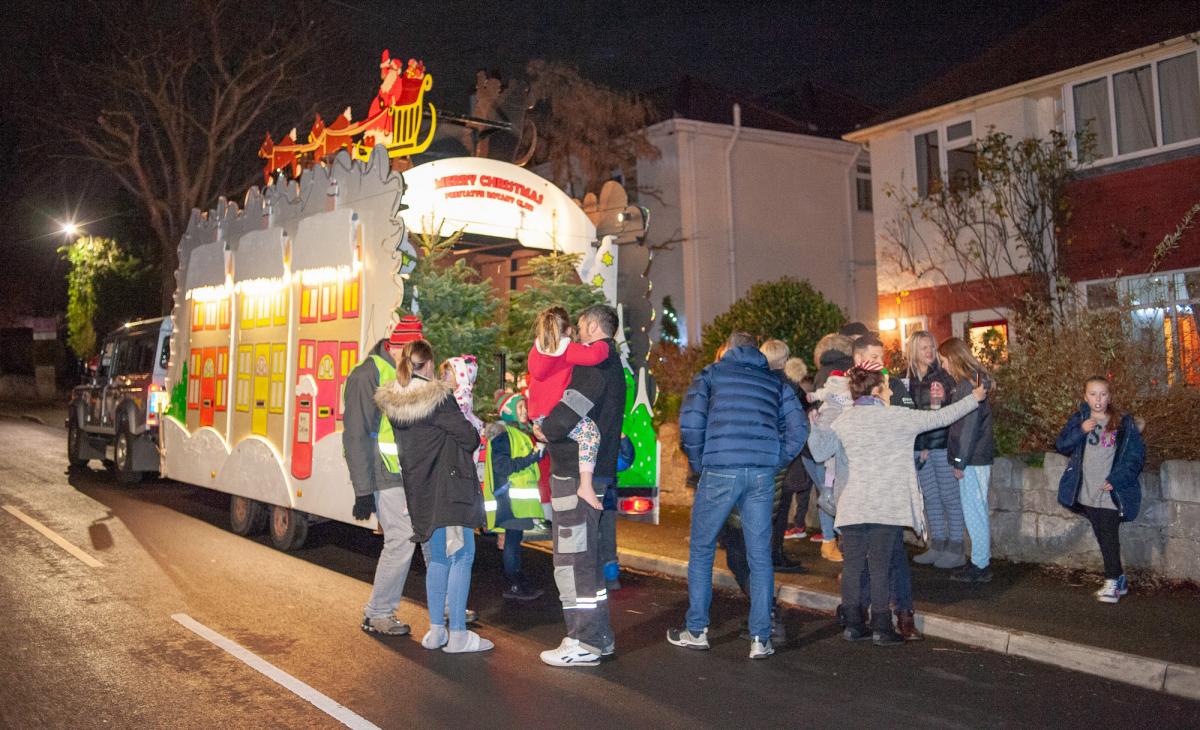 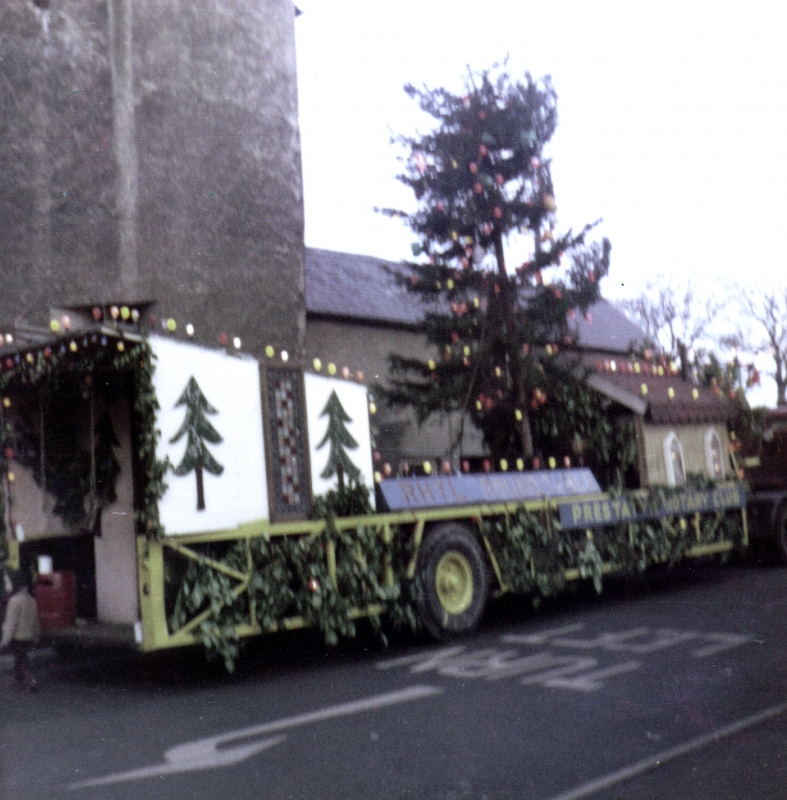 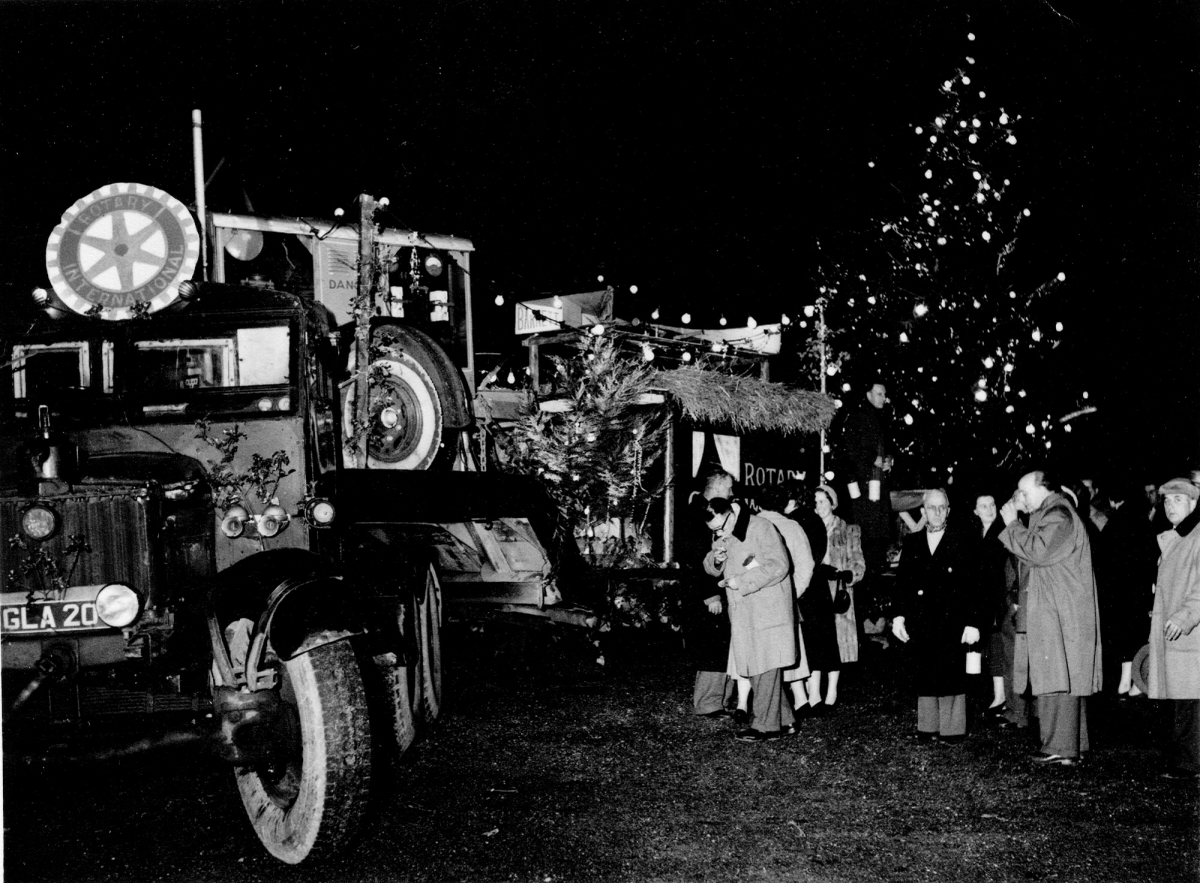 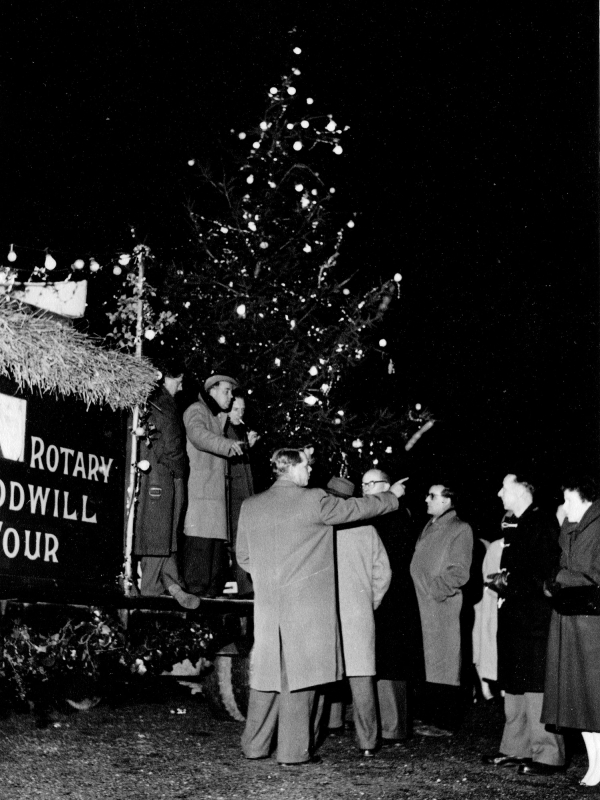 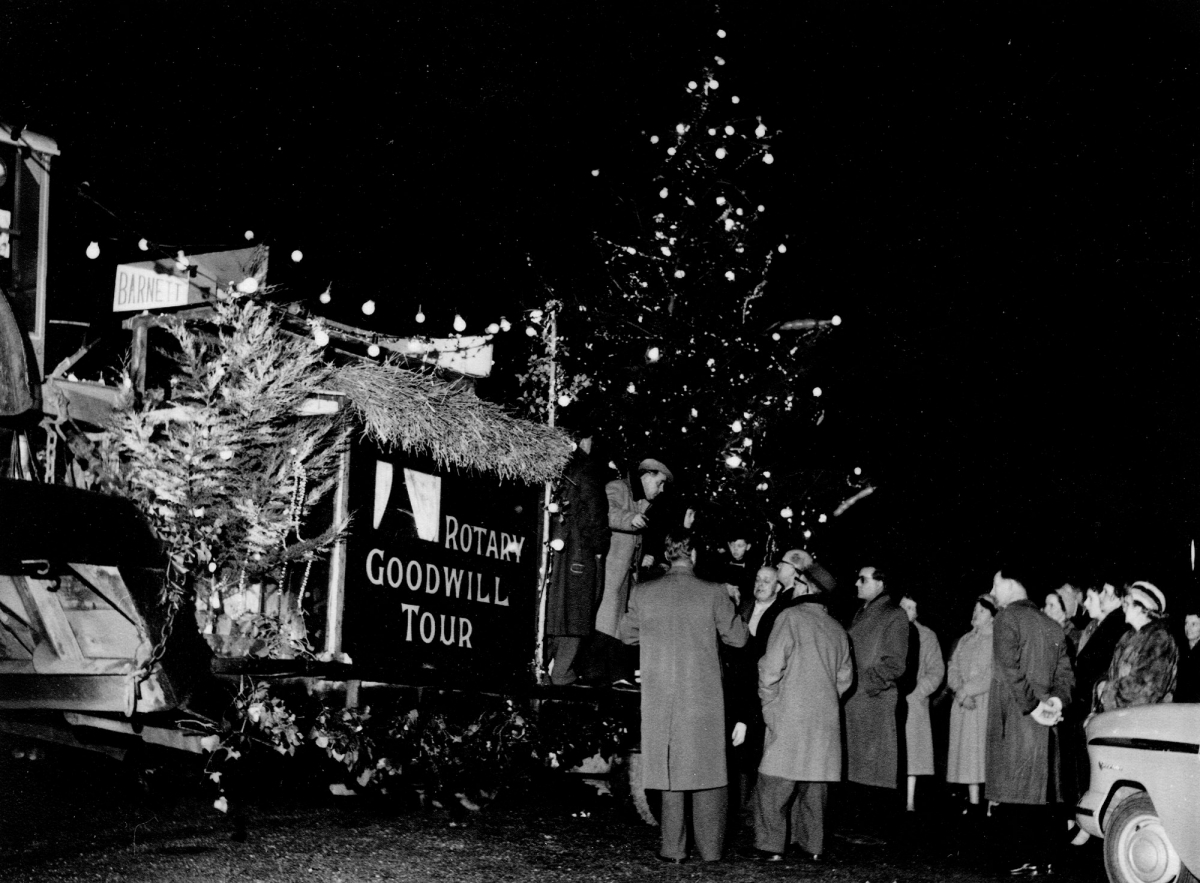 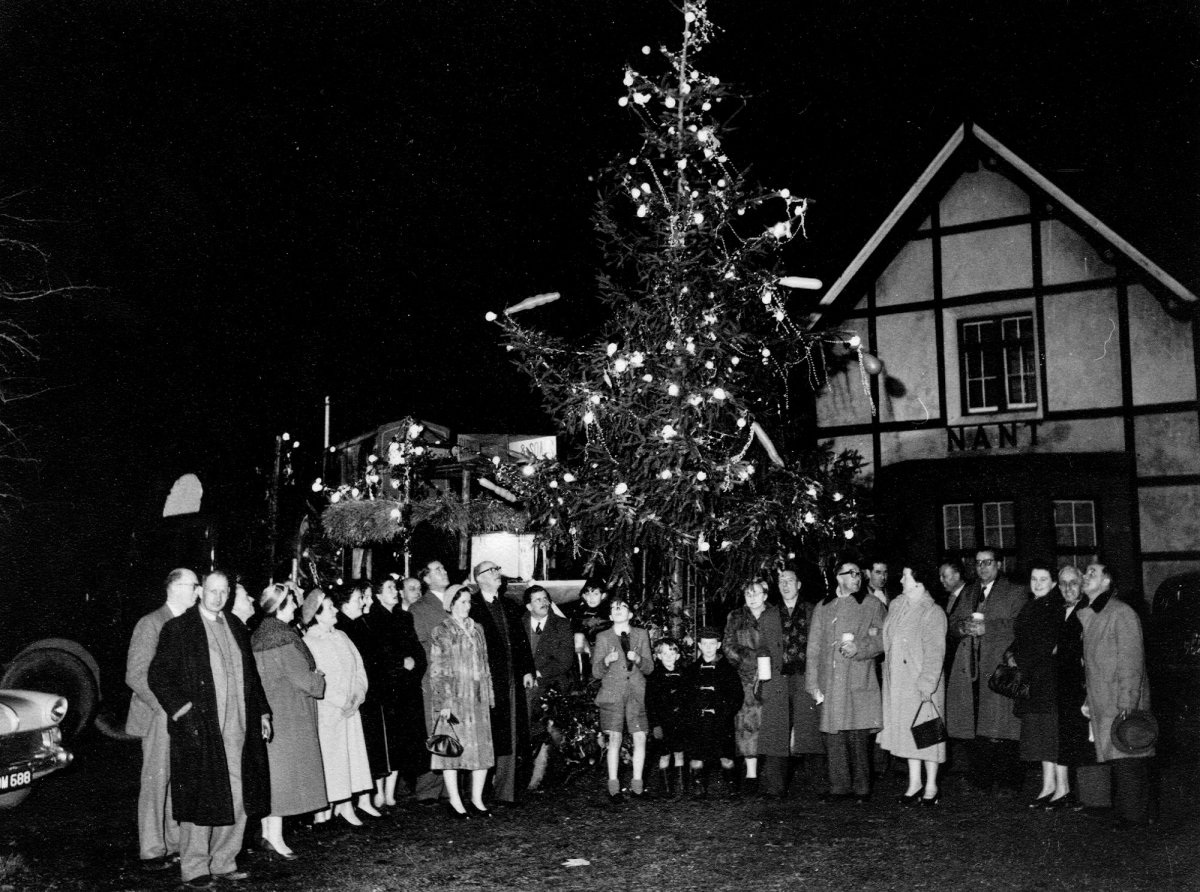 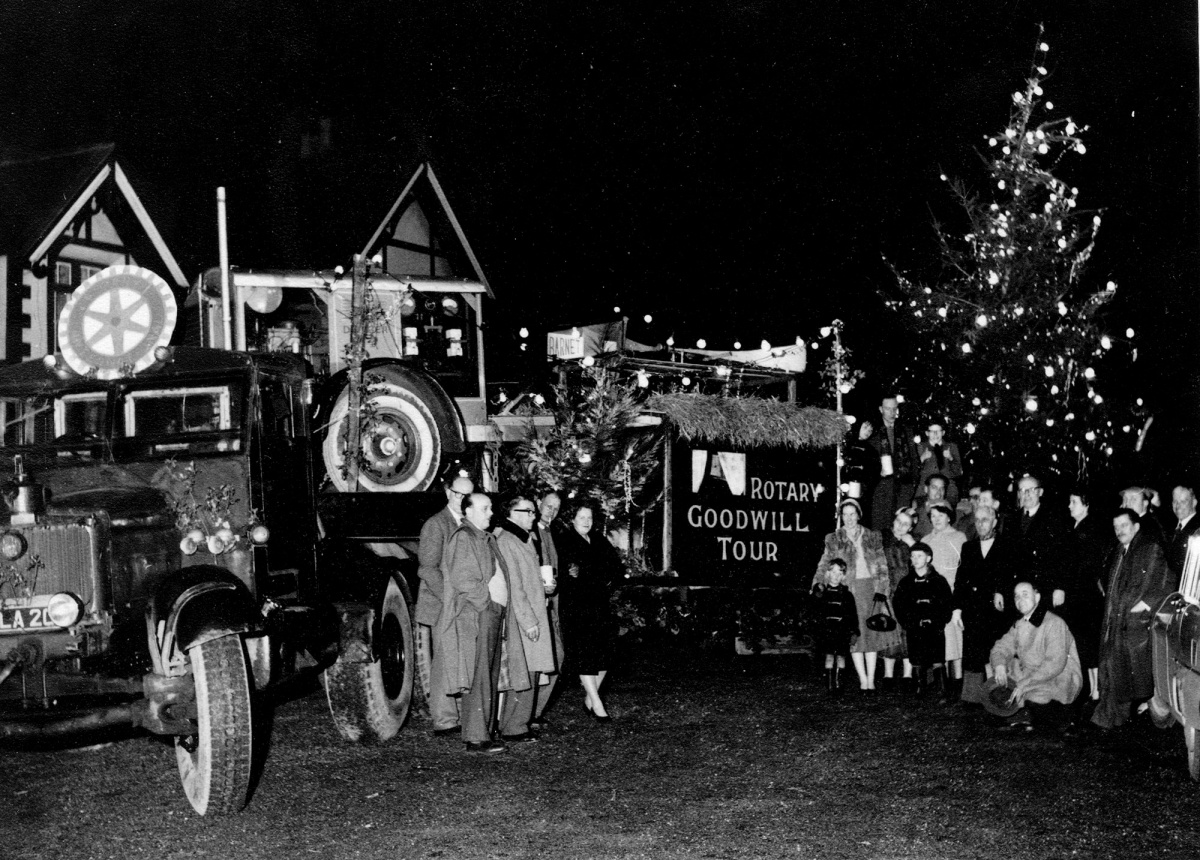 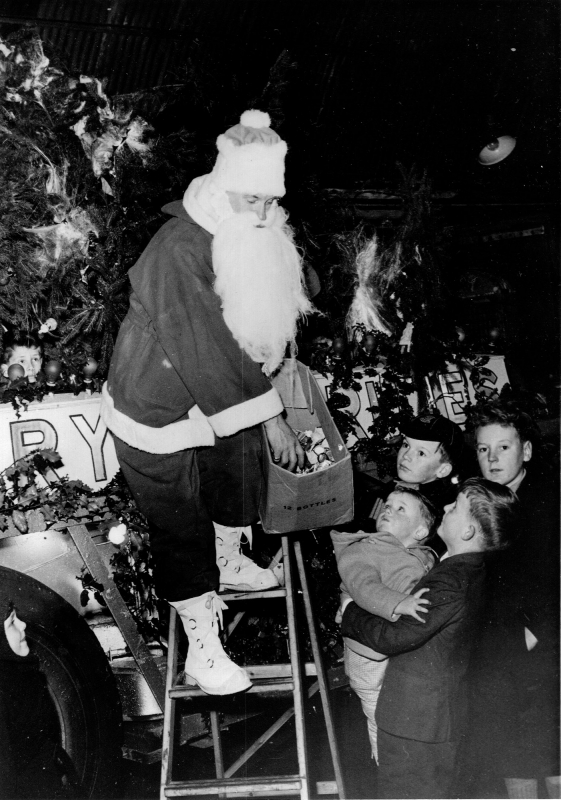 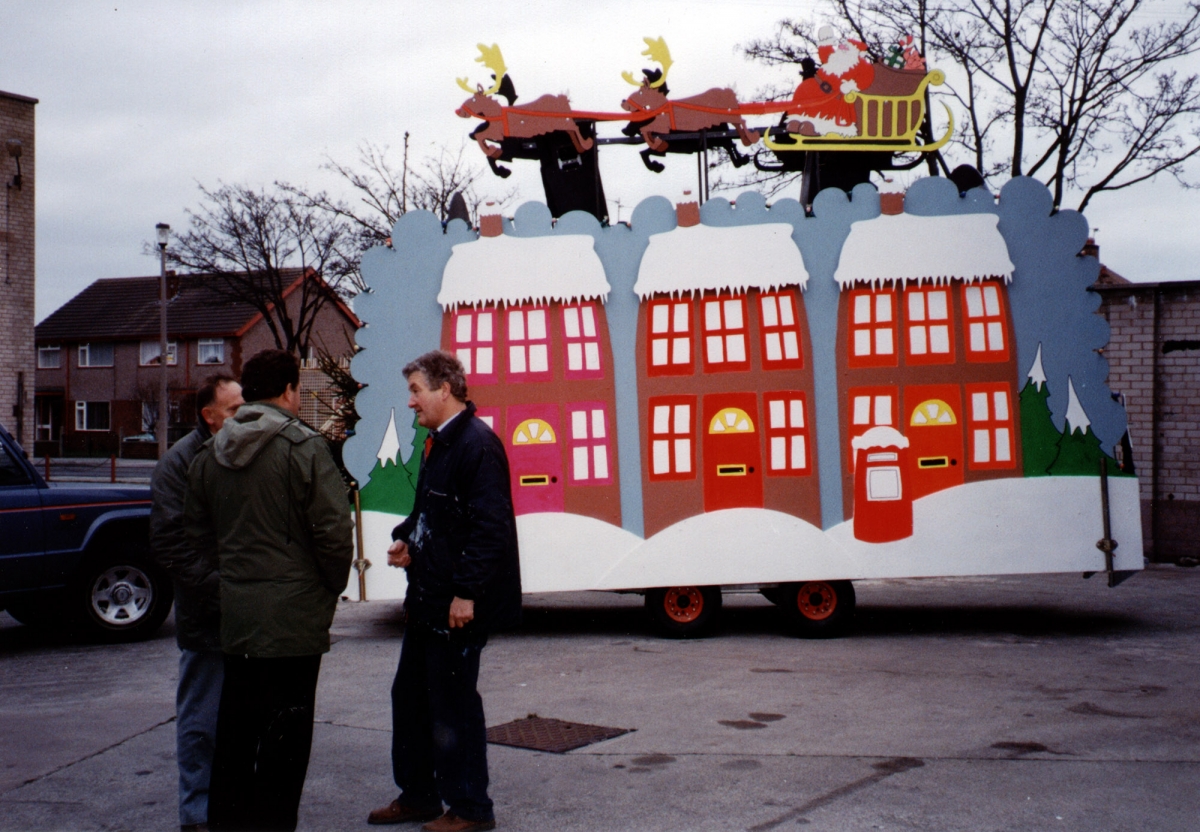 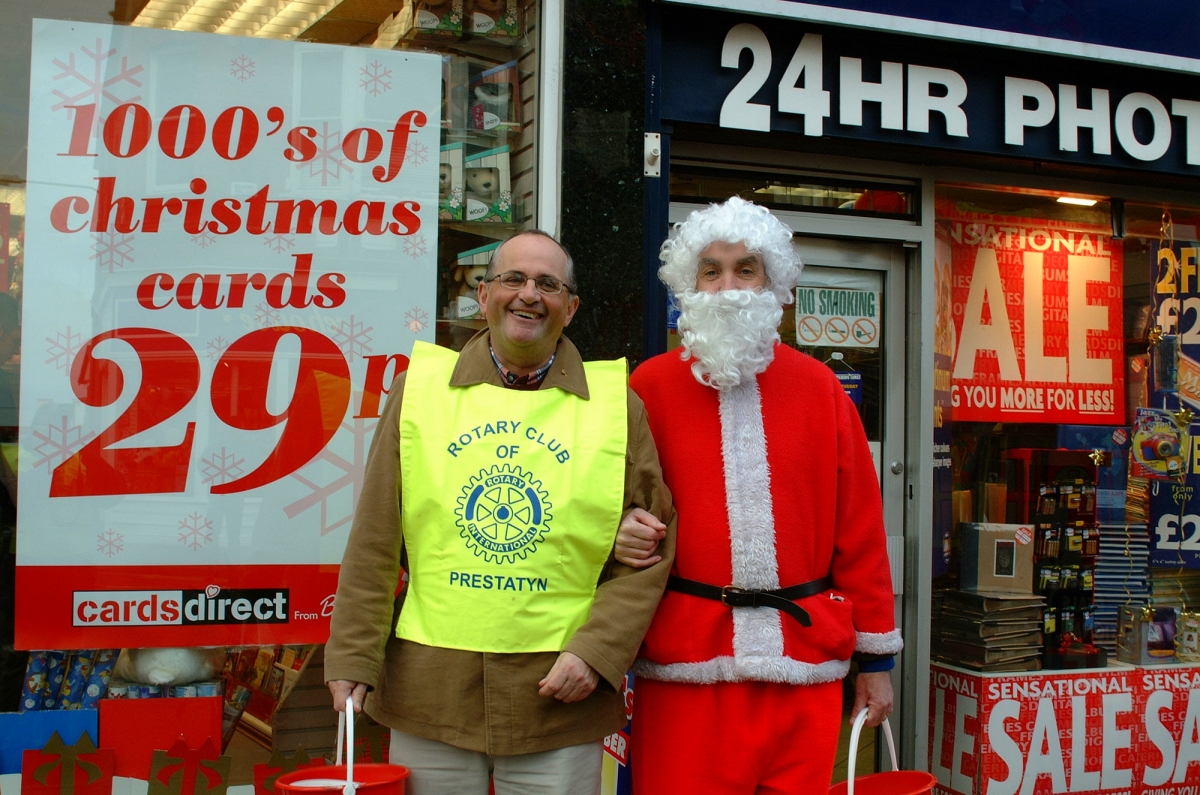 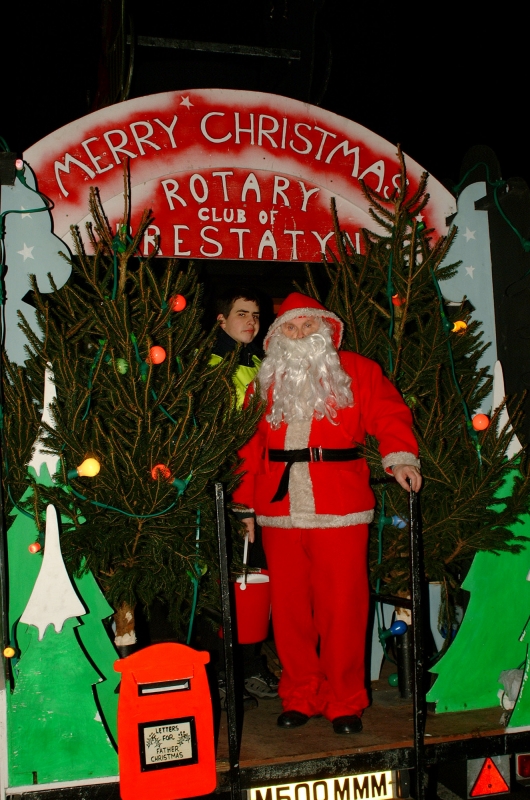 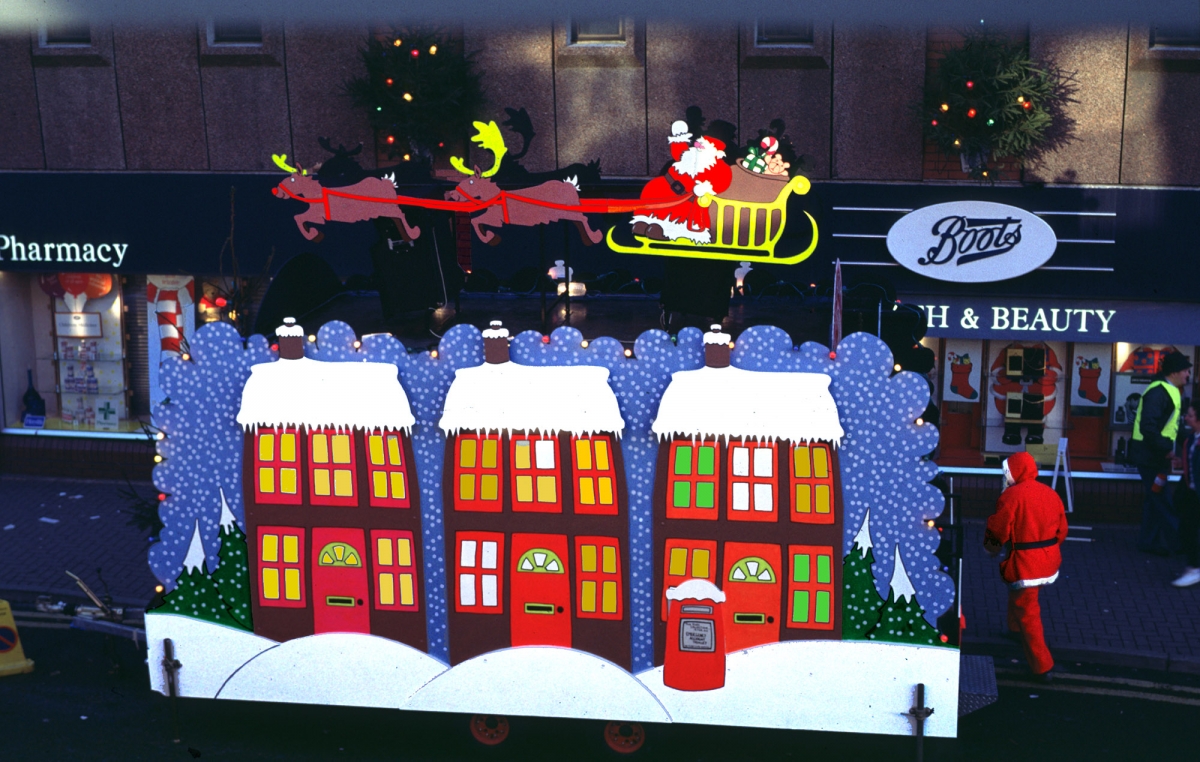 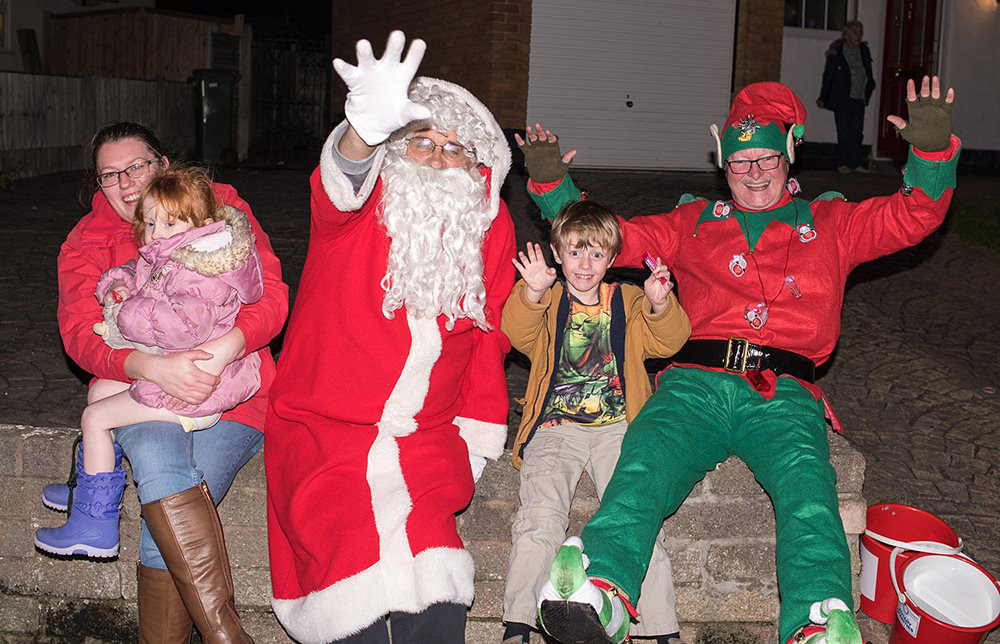 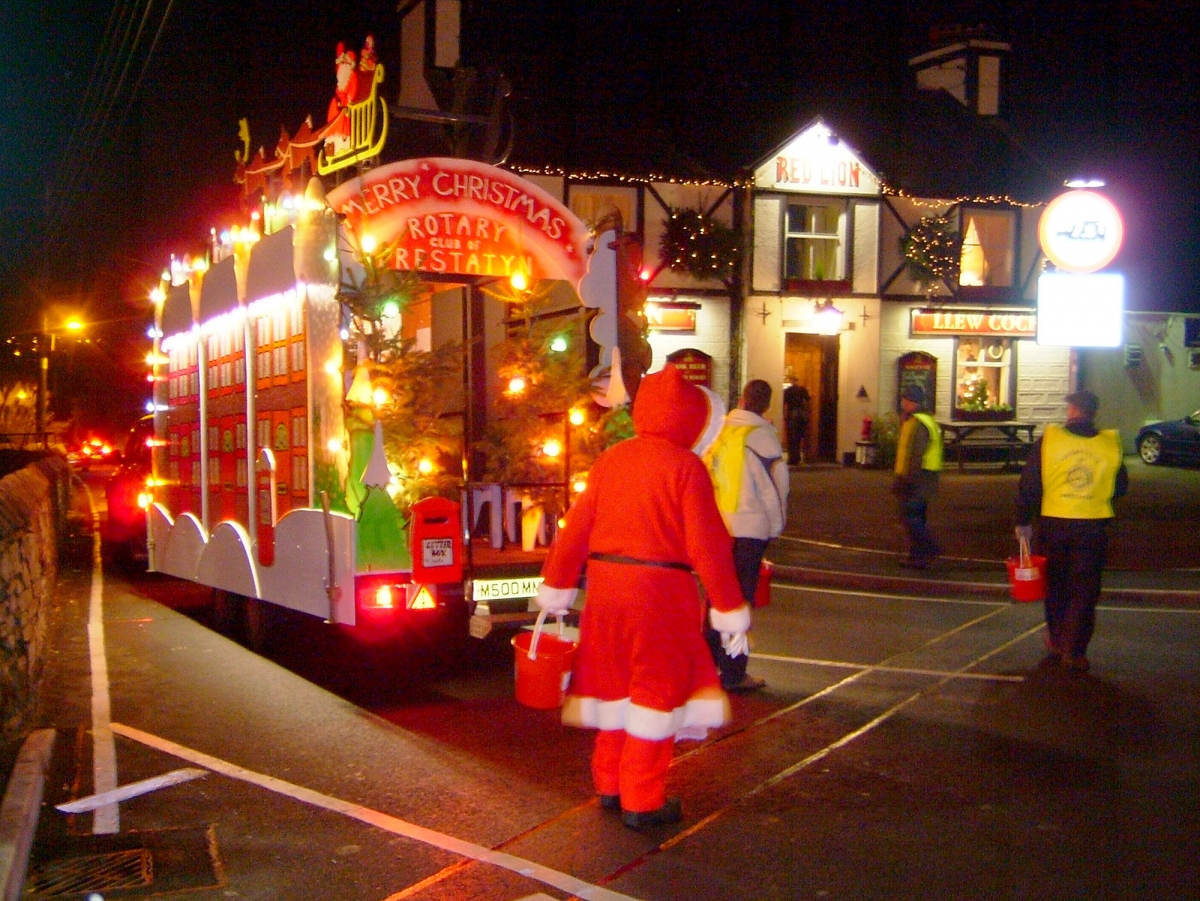 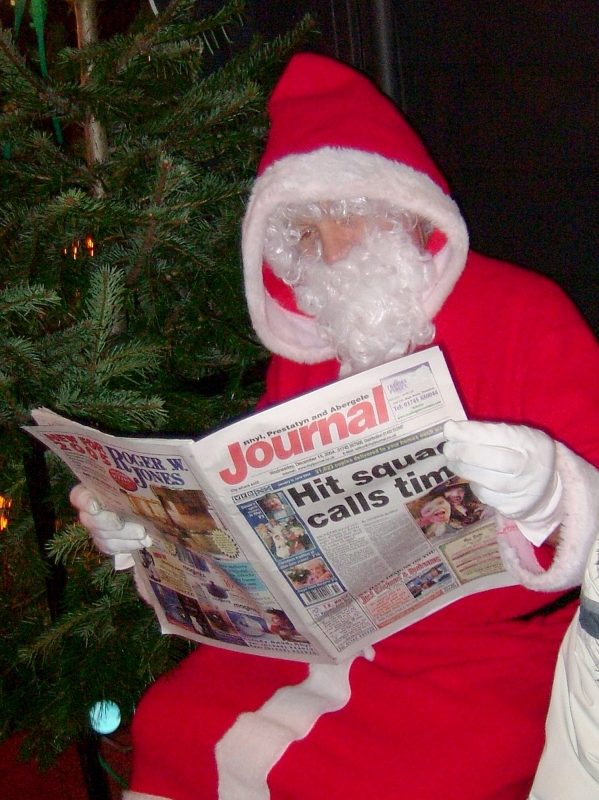 The Rotary float has become a regular and much appreciated feature of the festive season since its inception in 1957. How it has changed though - it was first agreed to mount a Christmas tree on a lorry, and three or four days before Christmas, park at several points around the town with singing of carols and distribution of sweets by Santa to the children. The first float was an adapted RAF recovery vehicle, affectionately known as a Queen Mary, on which was mounted a very large decorated Christmas tree. This was raised and lowered on a man-handled swivel to avoid overhead cables.

In 1980 the float vehicle was judged to be unfit for use on public roads, and a new, smaller float was built with Rhyl & District Round table, and this was decorated by pupils of Prestatyn High School. This float overturned the following year resulting in a trip to casualty for several Rotarians. It was then modified to give greater stability.

In 1989, members of Prestatyn Rotary Club built the current float which was designed by an art student in Wrexham college. The 1980 version continued to be used in the Rhyl area manned by the Round Table club, until it was accidentally destroyed by fire and has not been replaced.

The annual float run is a huge commitment by the Rotary Club. There are 130 slots to fill on the rotas, the float has to be serviced and maintained, the generator and sound system serviced installed and tested, the routes have to be checked and sometimes altered, the risk assessment and insurance cover checked, local authority permissions sought, sweets ordered, Christmas trees collected and fitted with lights, route details sent to the local newspapers and daily updates posted on Facebook. From early December until Christmas Eve the float covers over 40 miles visiting as many roads as we are able, using a Landrover very kindly loaned to us by a local businessman.

So 62 years on Prestatyn Rotarians carry on the tradition of a goodwill tour, and the current float has just completed its thirtieth year of service, having raised well over £100,000 for local good causes since 1990. Something for which Prestatyn Rotarians past and present should be very proud. The float is now safely tucked up under a tarpaulin at a secret location near the North Pole, and Prestatyns' Rotarians and their volunteers can relax just a little until plans for the next collection start, around September! **

Comment: Would be great to get peoples recollections about the float - especially from the early version.