Towards a Polio Free World 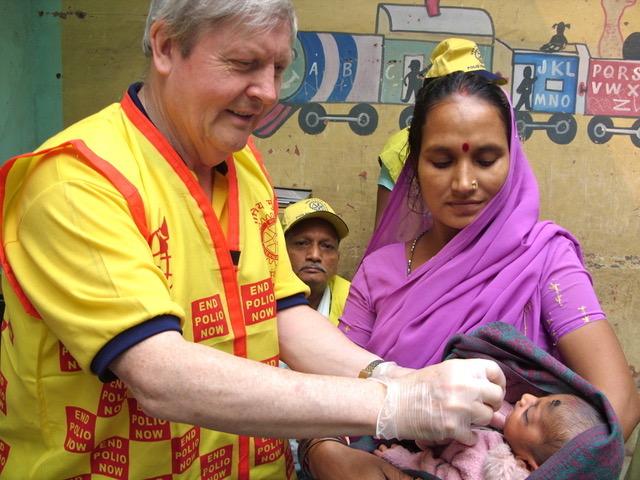 Towards a Polio Free World

We are getting closer to the goal of eradicating polio from the world.

The more friendly name polio softens the impact of its older name - infantile paralysis. It affects mainly children under 5 of whom about 1 in 200 suffer some degree of paralysis, particularly in the lower limbs, and of those between 5% and 10% die because they are unable to breathe.

Happily most people will have no experience of it. Since the development of vaccines there has been no epidemic here for over 60 years and no locally acquired cases at all for nearly 40 but for some memories are still vivid.

For people of my generation the fear of polio was very real. One frequently came across unfortunates who had suffered from it but made some recovery. During the summer months cinema news reels would show children being treated in iron lungs – metal tubes that would encase the body and just leave the head visible. The image was frightening to see.

The summer months were the danger time and swimming pools were a particular cause of concern.

My mum, with other mums, turning up at the Pontypridd Lido and getting their children out of the pool. We were a bit put out by that but it seems there had been a case of polio in a neighbouring valley.

On fine summer days my young friends and I would usually go swimming. If polio was about I can still remember my mother saying “Not in the swimming baths”

Then the vaccines were developed. Gareth Cheesman remembers the crowds of youngsters queuing at the Clinic in Ynysangharad Park. With mass vaccination initially by injection and then by mouth first on a sugar lump, the spread of polio was stopped and then eliminated.

It remained a scourge in many parts of the world and could have a lasting effect on people who came across it.

As well as using our own crew as gangway watchmen we were obliged to employ a local chap as an additional watchman. The lad in question looked as though he was 18 or 19 and had a very withered leg, to the extent that he found it very difficult to get about even with a home made crutch. He was unfailingly cheerful and always had a big smile for me. While sitting by the gangway he frequently played tunes with some skill on a crude wooden whistle. I became quite taken with the young man and asked him about his disability. He told me he had polio as a child but still managed to find employment. Before we left Ghana I gave him a metal penny whistle which I had unsuccessfully tried to learn to play. I often think about him.

Rotary International began a major project of mass vaccination in the Philippines in 1979. Some years later Gareth Cheesman went there

It was there that I became aware of many people of my generation and the one that followed us who had suffered polio in childhood. Many were from middle class or well to do families and been left with physical deformities of their limbs. The disease did not observe class barriers.

The success of its initiative in the Philippines led in 1985 to the setting up by Rotary International of PolioPlus, the first and largest internationally coordinated private sector support of a public health initiative.

This was followed in 1988 by the launch by the World Health Organisation and Rotary International of the Global Polio Eradication Initiative. Other organisations followed notably the Bill and Melinda Gates Foundation.

On 25th August of this year the WHO declared the African continent free of wild polio virus. The goal of eradicating polio from the world has been almost achieved but a final effort and continued vigilance are needed. A few pockets remain in war torn areas but a polio free world is in sight.