Narberth and Whitland Rotary have helped bring some seasonal cheer to local charities. 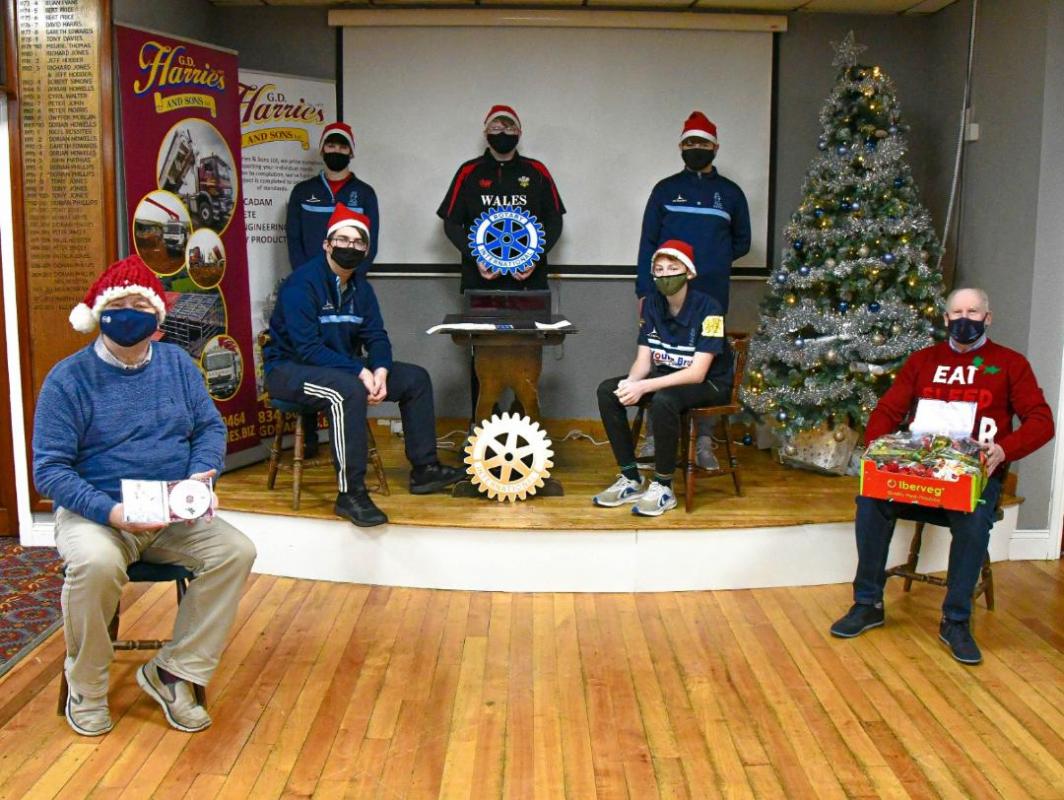 Narberth and Whitland Rotary have helped bring some seasonal cheer to local charities.

Their Santa Run raffle – staged instead of the Narberth Santa Run, cancelled because of the Covid-19 pandemic – raised the magnificent sum of £744 which is being shared between Narberth Foodbank, PATCH (Pembrokeshire Action To Combat Hardship) and Rotary charities.

There were great prizes up for grabs with first prize £50 (donated by the club), a hamper from Narberth-based Calon Wen, plus four hampers, a bottle of whisky and a signed Katherine Jenkins CD, all donated by club members.

The draw was made by kind permission at Narberth RFC using their random number generator machine by Olly Hough and Owain Holgate, who attend Ysgol y Preseli, two local Duke of Edinburgh Award students, who volunteered their time to help deliver flyers in the community promoting the Santa raffle and the Narberth and Whitland charity calendars produced by the club.

A welcome was given by Rob Lewis, chairman of Narberth RFC and helping Olly and Owain with the draw were some of their Narberth RFC Under 15 teammates George Jones, Owain Thomas and Casey Hicks.

The draw can be viewed on the Rotary club’s Facebook page.

Said John Hughes, Rotary fundraising committee chairman: “2020 has indeed been a very different year for us at Rotary, nevertheless we are delighted to have been able to raise £3,500 for charity thanks to the success of our virtual duck race, the Il Giro Di Pembrokeshire bike event, which was able to go ahead under Covid restrictions, sales of our charity calendars and the Santa Run raffle.

“These events have enabled us to support the Paul Sartori Foundation, Prostate Cancer Cymru, the aforementioned Narberth Foodbank and PATCH, plus Whitland Foodbank and many other good causes.”

“We wish everyone a Merry Christmas and a Happy 2021 when we look forward to holding our postponed events from 2020, namely Sunday Night Fever in the summer at Narberth RFC and the Richard and Adam in concert at Folly Farm in October, plus of course our other fundraising events.”

Don’t forget, if you are looking for that last minute stocking filler, the two charity calendars for 2021 – one for Narberth and one for Whitland which feature photographs of both towns make great presents.

The calendars, priced at £7, can be purchased online via the club website www.nwrotary.co.uk or local outlets. In Narberth, they can be bought at Nobles Newsagents, Haulfryn Jewellers, The Bloomfield Centre, Narberth Museum and Rushacre Garage, Number 6 The High Street and The Golden Sheaf Gallery while in Whitland, the Post Office and Stores (Clr. Barry Chapman), Mark John Butchers, The Station House and Mr. Roger Penn all have copies for sale.