Guest speaker Veronica Bird O.B.E. Born in Barnsley as one of nine children, spent 35 years as a Prison Officer/Governor including Deputy Governor at Armley Jail 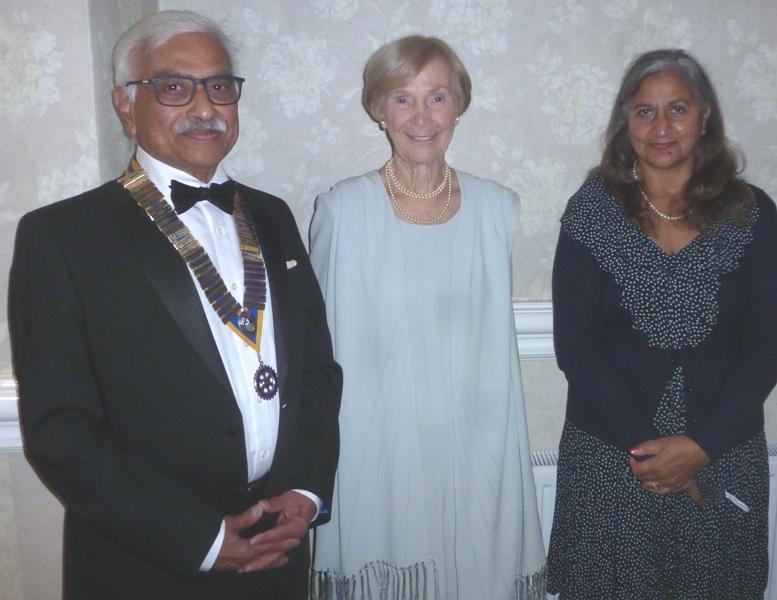 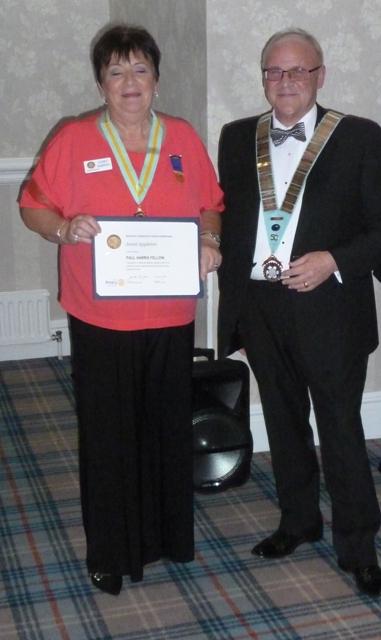 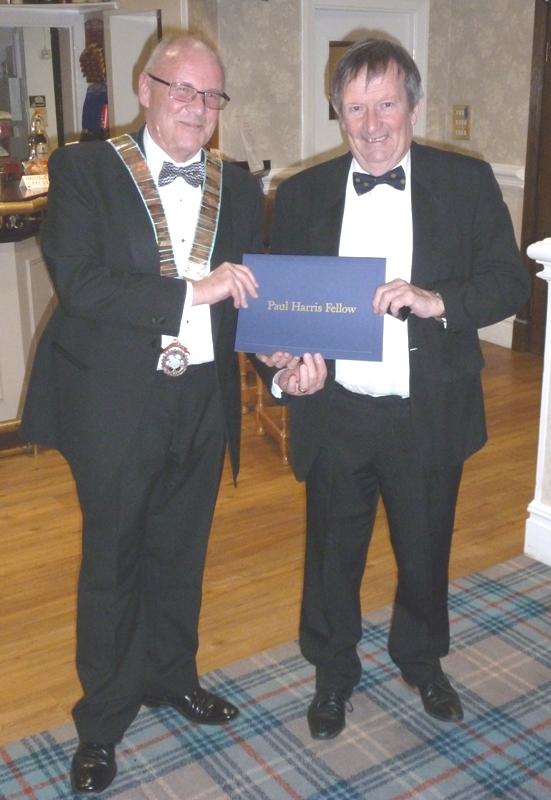 Aireborough's 68th birthday celebrations gave 70 Rotarians and their guests from near and far a rare opportunity to actually get together to enjoy Rotary at Horsforth Golf Club.

In welcoming his guests President Raj Mani was pleased to confirm that the Club had continued to function enthusiastically during periods of lockdown. Meetings moved to Zoom and a series of imaginative virtual events were organised with the Club also managing to recruit two new younger members during that period. Within and for the Community members and friends produced PPE including masks, scrubs, laundry and ring bags for care homes, charities, hospital wards and ambulance services. Thanks to a District 1040 appeal to its 98 Clubs and individual donors, chaired by Carol Jordan, 20 oxygen concnetrators plus other treatment and monitoring devices were provided for hospitals in Tamil Nadu. With the help of sister Club Chenna Patna these were speedily sourced in India and delivered to the most deserving hospitals.

As his charity for the year President Raj selected the management of Parkinson's disease. sharing £1000 between Leeds and York chapters. His reasons included suggestions that music and dancing benefited patients with the disease and that muscular activity working in symbiosis with the brain is also essential.

Congratulating Aireborough on the wide range of its projects both at home and abroad District Governor Stephen Ellis, York Ainsty. was confident the Club would be concentrating on how it could continue to keep moving forward and progress, 'Fundamental to Rotary's survival and its ability to support its local communities is how we attract new members, how we run our meetings and how we become attractive to the younger generation who are hungry to help others through project based activity'.

Proposing a toast to the guests President Elect John Kitching acknowledged Presidents of Clubs Ilkley, Otley Chevin, Leeds, Keighley, Bingley Airedale and Rondhay as well as members from Thirsk, the President of Aireborough Inner Wheel and the Chair of Inner Wheel District 4. John's Presidential 18 monthsbegins on 1 January 2022 when he intends building on successful projects whilst ensuring that the ability to change where necessary learned during lockdown will not be forgotten.

Two Aireborough members, both former Presidnets were then named Paul Harris Fellows. Bill Hudson through a long association with Guiseley Theatre and its AODS began 25 years ago by organising two charity evenings for Multiple Sclerosis charities. The Theatre has since hosted both recent Charity Beer Festivals and a visit to their annual AODS show has become a regular feature of the Club's programme. Bill's next venture taking over an empty shop on Yeadon High Street and encouraging members to stock it with surplus saleable items drew the headline 'they even sold the carpet!' He was a member of the team labouring on the Guiseley Wells Restoration project and a stalwart of the Guiseley Youth project providing facilities and activities for young people. His first contact with David Geldart at St. Mary's, Menston in 2008 began a lengthy collaboration and support for the Bambisanani Partnership culminating in the provision of a computer suite for Mnyakanya High School in South Africa.

Janet Appleton has brought several new projects to the Club beginning with Sal's Shoes which collects well-loved shoes from Primary School pupils and find new feet for them on pupils in countries throughout the world. Closer to home the Dolly Partomn Imagination Library sees 10 local children receiving a new book a month for several years in households where books are rarely available. She also encouraged Club members to support the local Hidden Homeless group with food, clothing and other goods vital for life on the street for individuals choosing to steer clear of the City Centre for reasons of personal safety. She chairs the Club's Thursday evening meetings where projects and events are planned and brought to fruition. For District she took on the role of Environmental Officer before becoming Assistant Governor Leeds Group improving both their communication and co-ordination.

Guest Speaker Veronica Bird O.B.E. talked of a difficult childhood in Barnsley with nine brothers and sisters, being treated as a slave and eventually being advised to escape from a relative's constant domestic abuse. She became a prison officer for 35 years eventually rising to be the first Female Governor of a prison including a period as Deputy Governor at Armley. She had many adventures along the way. Once whilst escorting a female prisoner in a taxi she found a novel way to prevent the escape as the individual began to lose her trousers halfway through the window. As a result she earned a nicknmane which regularly appeared during interviews for promotions where she was singularly successful.

Several notorious criminals came under her charge including Charles Bronson, who could perform 300 press-ups, was a regular visitor to prison rooftops, coated himself in margarine before assaulting prison officers and who accepted several proposals of marriage. Myra Hindley was another prisoner who had an escape plan foiled after using pink Camay soap to make prison keys whilst in a relationship with a prison officer and planning a bank robbery.

She visited Prime Minister John Major at Chequers the weekend beofre newspaper headlines surfaced publicising his affair 'it was the egg woman'. She met several members of the Royal family and was able to compare at first hand the behaviour towards the public of Prince Andrew and Princess Anne. Even the awarding of her O.B.E. by Her Majesty the Queen created a minor crisis when the page bearing the awards on a cushion dropped them on the floor. Once collected, Her Majesty calmly re-commenced the ceremony with the awards being correctly sorted and boxes as the recipients left the chamber. The award meant Victoria could marry in St. Paul's Cathedral.

Veronica requested no fee for her talk, instead the cheque was to be donated to one of several charities she supports - the NSPCC. She has promised to return at a later date.

more Election of Club officials for the coming year 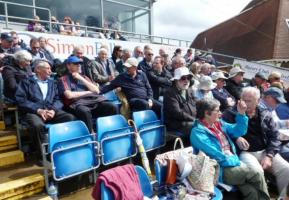 The best and worst of cricket

more 65 Aireborough Rotarians and friends made it to the Headingley Test to see a truncated rain affected day's play resulting in an overwhelming England win. 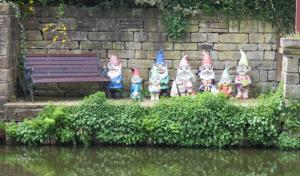 more Leeds Trinity University's Hayley Cook completed the walk and took pictures along the way of an area new to her. This is her view of the day.

more Agenda and minutes will have been circulated. Venue Horsforth Golf Club 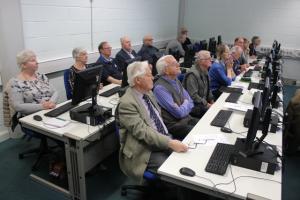 more What the well dressed Rotarians, Inner Wheel members and guests were wearing in 2014 and how they enjoyed themselves - yes really!

Raise funds for the Club for free by shopping online

more By shopping online you can earn the Club funds for free! To get started you need to sign up by following the simple steps at www.easyfundraising.org.uk/Rotary Club of Aireborough. Each time you shop it won't cost you a penny to earn the Club funds.

more Another good social event where choosing the team name was far more important than the position on the leaderboard.....for some! 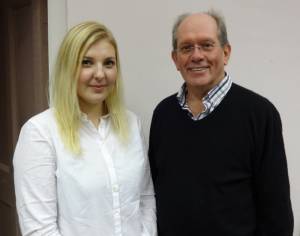 The Great American Songbook receives praise all round 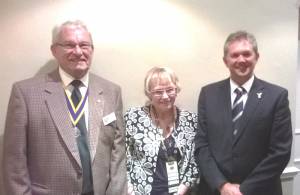 Yorkshire CCC and the vision of Headingley future

more There was a good crowd thronging the boundary when Mark Arthur made his debut in the Rotary arena. In an assured performance he spoke frankly about current problems but put forward short and long term solutions with the main aim Test cricket long term.

more Jerry Casburn and his wife Briony brought greetings from the Unley Club in Adelaide and gave a splendid presentation on the many features of their District 9520. The slide 'Australia is really a BIG country' told it all.

more 21 walkers + 4 dogs completed our annual walk this year, choosing their times carefully after last year's deluge. All were well supported and we look forward to hearing this year's sponsorship total.

The day that the rains came down

more Our first attempt at supporting the Rawdon Fun Day fell foul of atrocious weather. One could only feel massive sympathy for the organisers who had worked so hard to design a programme for the expected sizeable crowd ....Downhearted yes but we'll be back!

more July 1st's saw Outgoing President Bill Braker handing on the ceremonial chain of office with all its attendant promise to our Incoming President Barry Mills. He in turn passed on the President Elect's ribbon and medal to Tony Scaife.

more Brian Hall's one man show enlisted the help of volunteers from the audience and invaluable visual aids produced by the talented Carol.

more 'Via voice, piano and accordion ENCORE!, Maggi Stratford and Daniel Bowater,conjure up the atmosphere of the french cafe-cabaret with familiar songs, sung in French but interwoven with histories and explanations......a beautiful and amazing performance.'

Morrisons and Charity Shop 3 - 5 May 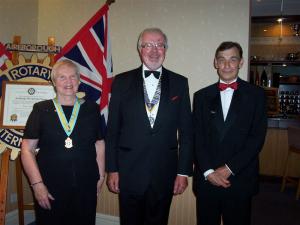 more The celebration of the Rotary Club of Aireborough's Charter. 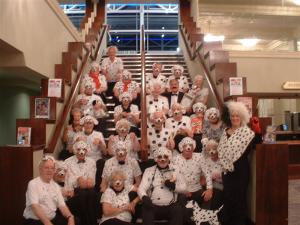 Decking the Halls for Christmas

more On this Social Event members also took time out to remember Roy Barker presenting his Past President's medal to his wife Sue.

more Frank Renton of 'Listen to the band' will be making his annual visit to Yeadon Town Hall conducting the Hepworth Band. Tickets £10 from Norman Gledhill 0113 2502164, proceeds in aid of local and military charities.

back This Committee tries to ensure weekly meetings run smoothly, arranges events both fund-raising and social, seeks ways to publicise activities and maintains the website. Reports on activities follow below, although they will often feature on the homepage.