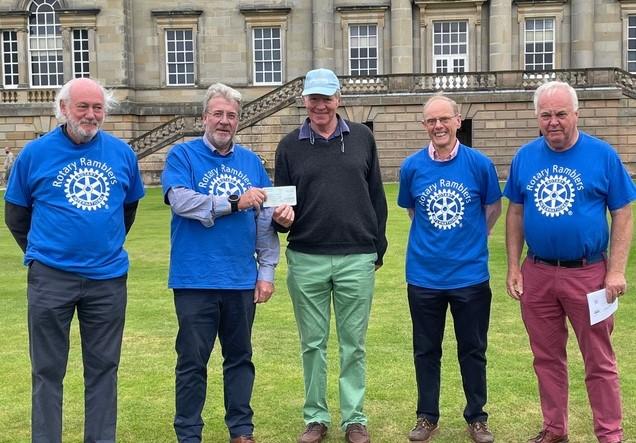 Earlier this year some 40 teams of five from all over Norfolk walked the equivalent of 375 miles, the distance form Norwich to Paris.  Each member had to complete the challenge set by former High Sherriff, James Bagge, between 12 and 24 May.  The aim was to raise money for charities, including Norfolk Carers, which aims to help some 100,000 unpaid carers who support elderly, sick and disabled family members and friends.

One of the teams was made up of members of the Rotary Club of King’s Lynn who raised nearly £3000 in total.  The team completed the challenge in 8 days and so finished in 3rd place.  Recently at a special reception held at Houghton Hall for participants of the challenge Steve Roberts handed a cheque for £1000 to James Bagge on behalf of the Rotary Club of King’s Lynn.  The remainder of the money raised is being used to support other good causes.

Photograph:  Members of the Rotary Ramblers team from the Rotary Club of King’s Lynn: