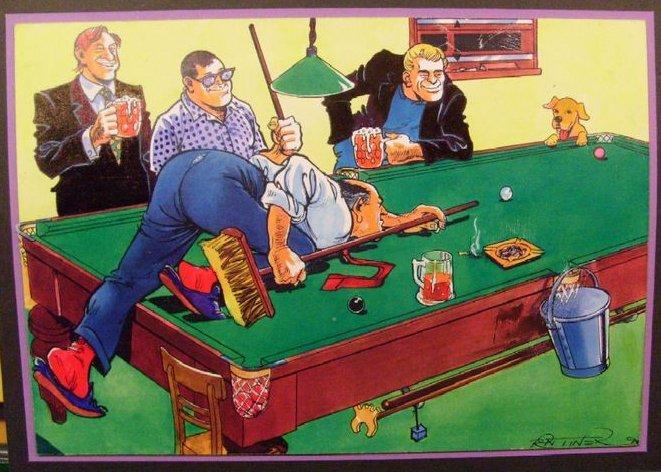 In the time it took Ian to lose his match and Ken to win his Greg and Tony managed to grind their opposition into submission as the marathon doubles match led to the South Ribble Potters claiming a 3:1 victory over the St. Annes on the Sea Rotary lads.

I was first up and lost magnificently to the better player in a singles game that he really should have won.

During this time Dave and Steve took on one of the doubles teams and came out on top in what was a fairly close fought contest but brilliance shone through in the end.

Ken was second up on the singles and a great game of cat and mouse (I thought we were playing snooker) ended with the black being re-spotted. Although Ken warned him that he had done this the previous match the opposition said Ken could break off and he immediately stepped up to the plate and doubled the black into the bottom left hand corner pocket without even a sorry, just 'I told you so'.

By now the Kentucky was getting cold and this seemed to motivate the Marathon snooker players of Greg and Tony to drive on and win their game by a considerable margin although on questioning the teams it was considered that '4 away' had been the winner on the night.

A great night of fun and fellowship was had by all ending in the suggestion that we all get together in the near future for another such night. As one of their number said we have had a great night out and good friendship, we don't stay this long if we are not enjoying ourselves.

More great nights like this from now on please.