End Polio Now is the most ambitious programme in Rotary's history.  For more than 30 years Rotary has led  the global effort to rid the world of this crippling disease.

Nearly 3 billion children have been vaccinated, preventing more than 18 million people being paralysed. More than 650,000 paralytic cases of polio are now prevented every year. More than 1.8 million childhood deaths have been prevented.

Once polio is eradicated, the world will be able to celebrate a major global advantage that will benefit all children, whatever their origins.

The goal of a polio free world is tantalisingly close. Wild polio virus types 2 and 3 have been eradicated.  Only in Pakistan and remote parts of Afghanistan is the Wild Type 1 polio virus circulating.

It's official - The WHO Africa Region has been declared wild polio-free!

On 25th August 2020, the World Health Organization’s (WHO) Africa region, was officially certified free from wild poliovirus , signifying a major milestone in the battle to eradicate the disease worldwide.

Rotary members have played an invaluable role in the effort to rid the African region of wild polio.By raising funds for polio eradication, advocating with world governments and national and local leaders, and raising awareness, Rotarians have contributed nearly US $890 million to conquer polio in the region.

Below are links to leaflets and fact sheets. You can click on each one to download it. The first two are also available to buy from the End Polio Now Guernsey website

A new oral vaccine will eliminate the risk of vaccine derived polio and is yet another big step towards complete eradication.

There are some links to specific fund raising initiatives for End Polio Now on the menu on the right.

To learn more about eradicating polio go to the RI website for polio eradication or the official website of the Global Polio Eradication Initiative. 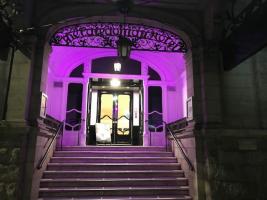 more Could your Club illuminate a building with the End Polio Now or Purple4Polio logo? Find out how to do it here