Centenary of The Rotary Foundation

The Rotary Foundation, Rotary's own charity, was founded in 1917. This page gives a summary of the first 100 years of Doing Good in the World.

If you would like to view a fascinating, ilustrated powerpoint presentation about the history of The Rotary Foundation, click here.

Or click here to view the presentation given by District Foundation Chair, Carol Stewart, in September 2016.

To buy a book about the first 100 years of Doing Good in the World, click here to go to the Rotary International website.


Or continue reading a short summary of the first 100 years, with links to more information. 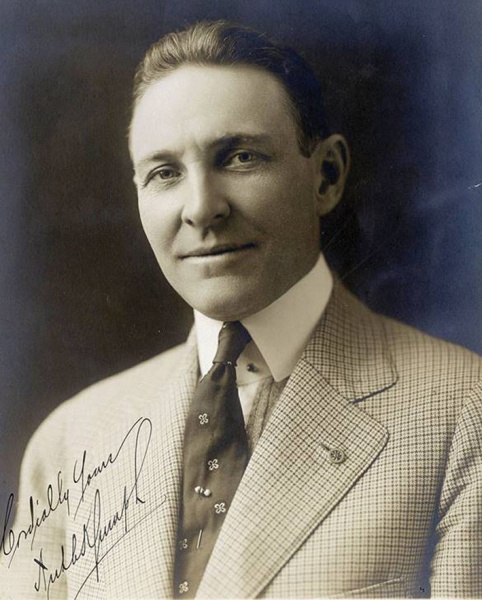 Arch Klumph is called the father of The Rotary Foundation because he had the vision of a Rotary endowment fund and the dedication to bring this dream to life. As president of the Rotary Club of Cleveland, Ohio, USA, in 1913, he advocated for the club to build a reserve that would ensure its means to do future good work. As President of Rotary in 1916-17, he proposed this idea to a larger audience. In his speech to the 1917 convention in Atlanta, he said: “It seems eminently proper that we should accept endowments for the purpose of doing good in the world, in charitable, educational or other avenues of community progress …”


Arch’s vision of an endowment would eventually become The Rotary Foundation, and his call for “doing good in the world” was to become the Foundation’s motto.The first donation of $26.50 came from the Rotary Club of Kansas.

In 1927, the endowment's name was changed to The Rotary Foundation and a Board of Trustees was appointed. Arch Klumpf was the first Chair of the Trustees. Today, the Foundation has 15 trustees who manage the Foundation’s business. They are nominated by the RI president-elect and elected by the RI Board to serve four-year terms.

In 1930, the Foundation made its first grant, $500 to the International Society for Crippled Children

In 1947, the Foundation launched its first programme: scholarships for graduate study. The programme’s criteria have changed a few times during its seven decades, and so has its name — the students have been called Paul Harris Fellows, Ambassadorial Scholars, and Rotary Scholars. But the concept of sending promising students abroad for graduate study remains the same.

The Foundation also focused on vocational training. In the 1960s, it began issuing Awards for Technical Training, later called Vocational Scholarships, which offered young adults an opportunity to study abroad and learn valuable skills that they could take back to their home countries.

In 1964, the Foundation Trustees began a Foundation programme called Group Study Exchange. The first 34 GSE teams travelled in the 1964-65 Rotary year, crisscrossing the globe as ambassadors for their vocations, their countries, and their Rotary districts. Their purpose was to observe how their professions were practiced in other parts of the world and to share ideas with their counterparts.

Today, the Foundation supports vocational training teams, groups of professionals who travel abroad either to teach local professionals about a particular field or to learn more about their own.

In 1963-64, RI President Carl Miller focused on reducing the tensions of the Cold War by bringing people of different cultures and beliefs together. In 1964, the Trustees approved the Matching Grants programme, which provided funding for clubs and districts to undertake projects that furthered international understanding. Members in two countries often worked together on humanitarian projects, and eventually this became a programme requirement.

In the 1970s, Rotary leaders began looking for a way to inspire large international projects to mark Rotary International’s 75th anniversary in 1980. In 1978, the Foundation created the Health, Hunger, and Humanity (3-H) program. In 1979, its first grant gave $760,000 to a multiyear project to immunize 6 million children in the Philippines against polio.

In the 1980s, Rotary began a three-year fundraising campaign with a goal of raising $120 million for polio eradication. The campaign focused on educating club members about the need to eradicate polio and the many benefits of a polio-free world. Rotary leaders met with other nongovernmental organizations and government officials to convince them of the feasibility of their goal and gain their support. The campaign raised $247 million, more than double the goal and paved the way for what we now know as End Polio Now.

The Foundation launched The Rotary Peace Centres in 1999 in cooperation with several leading universities throughout the world. Through academic training, study, and practice, the Rotary Peace Centres programme develops leaders who become catalysts for peace and conflict prevention and resolution in their communities and around the globe.

At the start of the 21st century, Foundation programmes were doing a great deal of good in the world. But Rotary leaders began to worry about how long the Foundation could sustain the wide assortment of programs that had evolved over the years. In 2004, Rotary started to look for a remedy to the increasing costs of administering these ever-expanding programs. It began work on what became known as the Future Vision Plan, in which the Foundation would offer just three types of grants: district grants, global grants, and packaged grants.

From 2010 to 2013, 100 districts participated in a pilot of Future Vision, and the new grant model was put into place worldwide in 2013. The Foundation discontinued Matching Grants, Ambassadorial Scholarships, Group Study Exchange, and other programmes, though the new grants retained many of their features. Not long after, it also discontinued the new packaged grants.

In the first 100 years, more than $3 billion have been spent on programmes and projects, transforming millions of lives across the globe.

Through the Foundation, Rotary members find satisfaction in serving others. The Foundation offers countless opportunities for all members and their friends to do good in their communities and in the world — and to make a real, life-changing difference for people in need.

And because of the Foundation, people around the world recognise Rotary as an agent of positive change in the world.

There are many ways that you can improve lives today and build a better future though Rotary:

more This page lists ways of donating to The Rotary Foundation

more Peace is a core part of the mission of The Rotary Foundation and one of the Areas of Focus for the Foundation grants.

back The Rotary Foundation: Rotary's own Charity