Impressions of a first year in Rotary

I have completed my first year as a Rotarian. I expect a second, hopefully a third but who knows?

I already knew about Service Clubs. For more than 10 years in three Round Tables I had rattled collecting tins, and blagged raffle prizes from local shopkeepers.   I had taken deprived children on holiday, bussed pensioners around the Lake District, organised a train trip for the disabled, chopped logs, distributed Christmas parcels, won a prize for my Boy George impression at the Area Song Competition and I  became a champion Copper Crapper (don't ask.)  Incidentally I would have won the mountain top darts challenge had not a cruel blast of wind taken my final dart over a cliff.

We were young and we had big ideas. We injected huge amounts of steam into them and shared the risks. We visited other clubs, attended a multitude of black tie dinners and dutifully brought greetings back from all and sundry.  And we drank too much at a time when licensing hours were seen more as guidelines rather than limits.

But that was then and now is now. I had been invited to a Rotary membership evening and was 20 years older. How would Rotary compare?  In truth I hoped it wouldn't, I didn't fancy rerunning history in an older body.

I arrived in a positive frame of mind and was warmly received. An existing member delivered a rousing validation of Rotary. Then, someone took me to an information board, outlined the club's achievement and put it into the context of Rotary worldwide. It was a good pitch and I was convinced. If I joined I was to attend weekly, each Monday evening 6pm for dinner, and be co-opted onto a committee with an expectation that I would contribute to the wider fundraising and social life of the club.

I already knew some members but was Rotary right for me?  What about attendance rules, I spend some time away from home?  Not to worry, I was told, the quality of contribution is more important than the quantity. Most members lead busy lives; some with family dispersed across the world and many travel widely.

But did I need the commitment after the world of work?  I had just escaped that particular straitjacket but I would not join to become a sleeper, a shadowy figure who is absent when work is to be done. In the event I applied for membership and was accepted. So how has it been?

Well it has been an extremely rewarding year, I am lucky to be in a great club and I am proud of my Rotary membership. I have listened to many interesting speakers, enjoyed good company and have always reflected on a Monday evening well spent. Specifically I have ball spotted at a golf tournament, marshalled a cross country run and a midnight walk, rattled tins for charitable organisations, and encouraged passers by to a free blood pressure check. I have visited a deer farm where we ate venison burgers, I 'walked and dined' with other members, loaded up 'Bikes for Africa' and got involved in all manner of other things.

I was co-opted onto the Public Relations Committee so throughout the year I have written up many press releases. This is a gift role for a new member as it requires reflection and interpretation of club activities. In this way I was quickly up and running, witnessing and describing the strength of Rotary across its many activities.

I have picked up some impressions along the way: 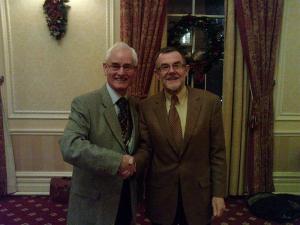