FIRST MEETING: 11th April 1921 at the Grand Hotel.  An extract from the Northampton Daily Chronicle of 31 May 1921, which describes the event, can be downloaded here

The First President, Mr A E Marlowe died in July 1922.  His obituary in the Northampton Independent can be downloaded here

RI RECORDS: The Rotary Club of Northampton, England No 1073 was organised on 12 April 1921 by the British Association of Rotary Clubs and elected on 1 February 1922 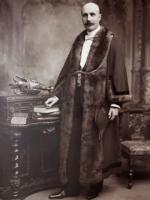 Our First President - A E Marlow

The story behind the man

Written by the President for the 90th Anniversary