The reading age of such youths tends to be much lower than average and this is a serious impediment to their future and perhaps a contributory factor to their current situation so the money is being used to buy a specialist range of books These books have been particularly written for teenagers with a lower reading age - but still having the right sort of content to interest them.

The idea for the project was taken up with great enthusiasm by both the Head of YOT and the Principal Librarian for Young People's Services at Harrow and their enthusiasm and commitment was,  and still is - both considerable and crucial.

From its' conception, the project has already grown! Harrow Library has provided suitable book shelving and has donated additional books to help get this library started. Furthermore, YOT has instigated a program of volunteers to help these teenagers with their literacy with one-to-one help. All this for just £600! As far as we can tell, this is a unique project - we have yet to find another example of such a library within any YOT. The Youth Justice Board is not aware of any other such projects.

Helping bring the gift of literacy is always valuable but we sometimes forget that such problems exist right here in our own backyard, not just in faraway places. What about you? Could you help to start such a project in your area?  If you want any information about this do contact us.

The Tournament was a one-day event for teams of 4 students from local schools and colleges who undertake an unseen challenge against the clock of a design, build and test nature. It was consistent with the requirements of the national curriculum and its execution develops team building, communication skills, planning and time management, as well as solving a design and technology problem.

Until recently, members of the Rotary Club of Pinner accompanied and funded a fun packed day out for children from Grangewood special needs primary school. Typically it involved a trip to Thorpe Park. The adrenalin rush of the rides and the excitement of Thorpe Park make this a memorable experience for these youngsters. Many Rotary Clubs take similar groups to this venue and other venues around the country in the middle of June each year.

The foundations of KidsOut were firmly laid when, in the early 1960's when Littlewood's founder Sir John Moores began The Liverpool Motorists' Day Out. This was a local event where a group of privileged car owners took disabled and disadvantaged children out for a special and memorable day, often a trip to the seaside, to a local park or zoo. It was then in 1990 when Sir John's eldest daughter, Lady Grantchester, saw an opportunity to build on her father's legacy. With the help of her local Rotary Club, two dedicated Rotarians, and a financial donation from Littlewoods, a day for 200 disadvantaged children took place at Thorpe Park. Such was its success that other Rotary Clubs throughout the UK wanted to do the same, and soon the day - aptly titled KidsOut - became the largest single day out for special needs children in the UK. In 1999, in order to secure funding for these days out and to raise funds for other children's activities, a national registered charity was formed called KidsOut was established. 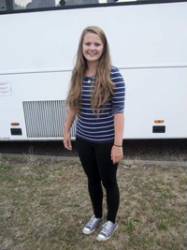 Our Pinner Club candidate in 2014