Link Visits to Belgium and Germany

In 1980, a major objective of the Rotary Club of Pinner was to establish a Link Club and contact was established with the Rotary Club of Bruges-West in Belgium. In November 1980, a trip to Bruges was made by a number of club members including Barry Albert, Fred Barratt, Mike Etheridge, Eric Farrell, Richard Tedman, Tommy Thomas and Leonard Wilson who ventured across the moat to Calais on what was a cold morning.  Not even the snow and mountainous waves could deter our intrepid heroes, although I suspect there were anxious moments watching the divers free the anchor chain from the screw.

Sheer single mindedness led to folly. Our then Secretary incurred a hefty fine for speeding, after just 15 minutes driving on the wrong side of the road, desperately trying to keep pace with Stanley.  That morning set a new Club tradition - the compulsory watering hole rest at picturesque Veurne, just inside the Belgium border. Despite causing utter chaos in Bruges from a monumental traffic jam, Club were welcomed by the Bruges-West members, including Raymond Bartholomeus, their driving force on the International side.

A further trip was made in May 1981 when a party of twenty-seven Club Rotarians and their ladies, led by Past President Stanley Hall, made a visit to the 'Venice of the North' to formalise our linkage with the Rotary Club of Bruges-West.

Since 1982, there have been annual tripartite visits. The Rotary Club of Pinner has hosted visits to Pinner, Oxford, Windsor, London (3 times), Stratford / Warwick castle, Cambridge, Bath, York, Oxford, Norwich and in 2011 Canterbury / Chatham in Kent. The visits to Meerbusch included both the 10th and 25th anniversaries of their charter and outings to the Middle Rhine, Münster, Aachen, Cologne, Wuppertal, Berlin, Mosel region, Düsseldorf, and in 2010 Lubeck and Hamburg.  Bruges- West visits included their 25th anniversary and were mainly based in Bruges with outings to Normandy and Flanders. More recently visits to Brussels, Kortrijk, Douai and Lille and in 2012, Antwerp.

During the 1987 Meerbusch visit Past President Stanley Hall was presented with a medal to mark his retirement as Chairman of the International Committee and in recognition of his tremendous achievement in forming the Pinner Club linkage.  Stanley, in turn, paid tribute to his opposite number in Bruges-West, Raymond Bartholomeus, a very enthusiastic and dedicated Rotarian, adding that Club owed Raymond a great debt as he had played a large role in helping to form our link.

These international meetings have certainly proved both interesting and memorable with Rotarians in the three clubs having made many lasting friendships during these trips. Long may they continue! 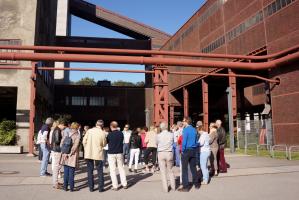 2019 Link Visit to Meerbusch and the Ruhr Valley

more Our 2019 get-together of the Rotary Clubs of Bruges West, Meerbusch and Pinner. 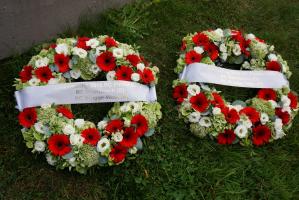 more Our annual international gathering with our Link Clubs 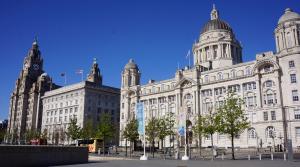 more Exploring the city famous for football and the Beatles with our fellow Rotarians. 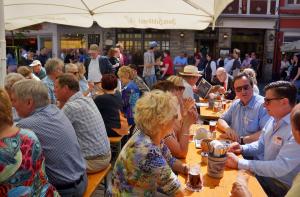 more Another enjoyable meeting of our three linked clubs