1.    As in previous years the Club made donations to the following charities:

a.     Hope and Homes for Children


2.    The Club was particularly active in supporting the Aquabox project sending a total of 24 boxes during the year. Some of the boxes were paid for out of club funds and others received free of charge.


a.     Throughout the year several Club members (and partners) practised their Aquabox packing  skills. Sadly, in some cases with little discernible, sustained improvement in their manual dexterity. For the moment then, for some, any second career ambitions to become Morrison's shelf stackers must remain a mere dream.


b.    Rotarian Geoffrey Barton and Heather maintained their long standing commitment to the Aquabox project by raising well over

more Di Oldam has visited Mwanza, Ukerewe, Tanzania three times and recounted her latest adventures to Club members plus her intention to fund raise for one particular individual she met there. 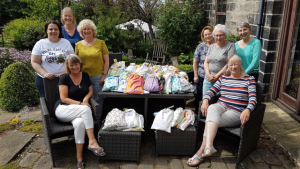 back This Committee supports activities financially and through hands-on help, including participating in immunisations in India, filling Aquaboxes for disaster areas, backpacks for Mary's Meals pupils and menstrual care kits for pupils through Days for Girls.