Children show off their painted little finger - purple dye is used to signify a completed immunisation. 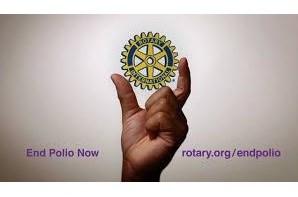 Polio continues to be an issue which is of great concern across the world and has not escaped the notice of world leaders. At the Commonwealth Heads of Government Meeting, held in Australia, October 2011, millions of dollars were pledged to the Global Polio Eradication Initiative. In total, $100m is being donated by three Commonwealth countries with $40m from Bill Gates.