The Rotary Club of Henley on Thames obtained its original Charter on the 25th May 1955. Next year in 2015 we will celebrate the 60th Anniversary and this appears an appropriate moment to record a few details of the Club’s development.

For nigh on 60 years Henley Rotary Club has quietly but diligently pursued the aims of the Rotary movement of service to the community, the promotion of international friendship and understanding, and the attainment of the highest standards of conduct in members’ professions or occupations.

Some key events in the Club’s development have been:

1960 - the annual Midnight Matinee the first of which was supported by Richard Todd, Robert Morley and Eric Sykes, and which has since raised in excess of

The rewards you will receive from belonging to Rotary are varied and vast: 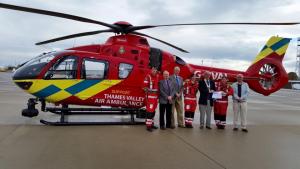 ROTARY is a worldwide network of inspired men and women who translate their passions into relevant social causes, to change life in the communities, encourage high ethical standards in all vocations and work toward understanding and peace.

The object of Rotary

What's on in our club