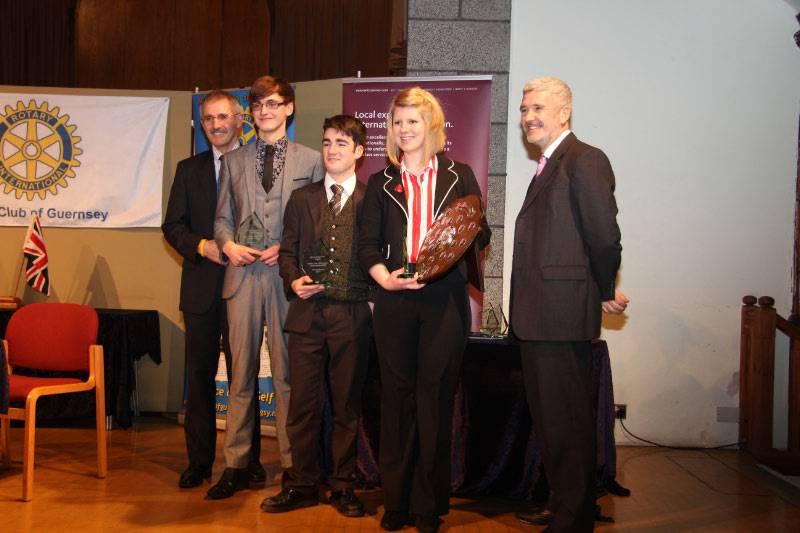 For the second year running the Grammar School senior team won the Rotary Youth Speaks competition and will represent Guernsey in the UK.

Six teams from five schools took part in the public speaking competition at St James on January 28th, but it was Helena de Carteret 18, Douglas Craig 17 and Jordon Linton 18, from the Grammar School, who topped the senior class and won the overall competition.

Last year they won the competition and went on to come second in the district final in Hampshire, but Mr Craig said they wanted to do even better this year.

"We really enjoyed it last year and we wanted to see if we could do even better" he said. "At the regional's we were so close, but we were told we lacked gravitas. Last year we did it on Batman, this year we have done it on education".

The groups talk was entitled Down the Rabbit Hole and it looked at Guernsey's education system and used analogies with Lewis Carroll's work.

The group said they believed Guernsey's education system was not too bad, but they felt there was more room for creativity and individuality in the system.

Blanchelande College topped the intermediate class, with their talk, Unsung Heroes, which looked at unlikely heroes like bees, which can sting you, but also pollinate flowers. The Blanchelande chairwoman was Jenna Tostevin, 15.

"We haven't won it since 1992, so we are really pleased to have got it back and we hope we have done the school proud", she said.

Rotaries Youth Opportunities chairman, Simon Milsted said the evening had been a great success, "It was a lively audience and they really appreciated the hard work the teachers and students had put in" he said.

Mourant Ozannes has sponsored the event for the last nine years and supported it again this year. The company will also be funding the Grammar School team's trip on 22 March to compete in the district final in Andover, Hampshire.

Best proposer of the vote of thanks - Peter Bourne, from the Elizabeth College senior team