On the 19th August and after 34 years of living in Bowdon, Trafford , Rosemary and Sinclair McLeod moved north of the Border to live in Kirkaldy, Scotland. Rosemary had been an active member and Past President of the Inner Wheel club of Manchester (The first Inner Wheel Club in the world) . 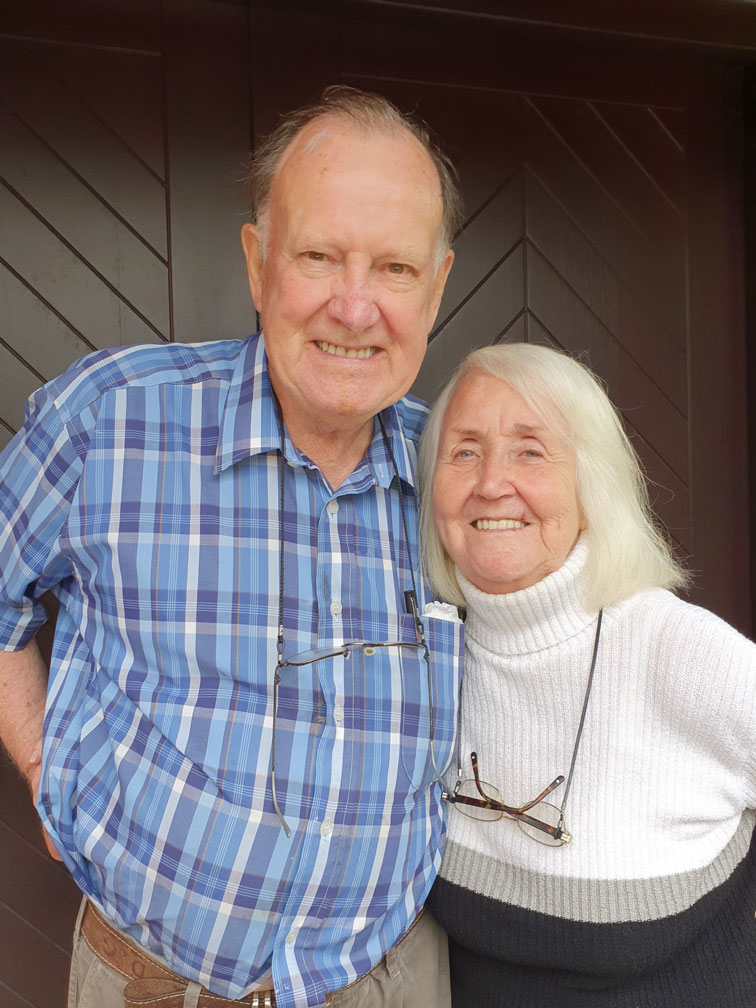 Sinclair has been a Rotarian at the Rotary Club of Manchester all those years and, in fact, continues to be a member of our Club and regularly joins us by zoom . He has served the Club well and was President in 1995/6 followed by a period as both secretary and later Trteasurer

A few members of the clubs helped them prepare for the big move and a few photographs were taken on that last day. We wish them well on this new chapter of their lives in Nicola-land........

President Sarah handed over the President's Collar last week to new President Derek in his back garden in Poynton. President Derek presented IPP Sarah with her Past Presidents badge  It is going to be a most unusual start to the Rotary Year as ,due to COVID-19 restrictions , our meetings will have to be via Zoom. It is a way for members to still keep in contact both visually and by spoken word. It's brilliant to be able to use this new technology .

IPP Sarah will give her Valedictory speech on Thursday 2nd July followed by the official handover to President Derek. We all wish Derek a good year following an excellent year from IPP Sarah !  The photographs record the event 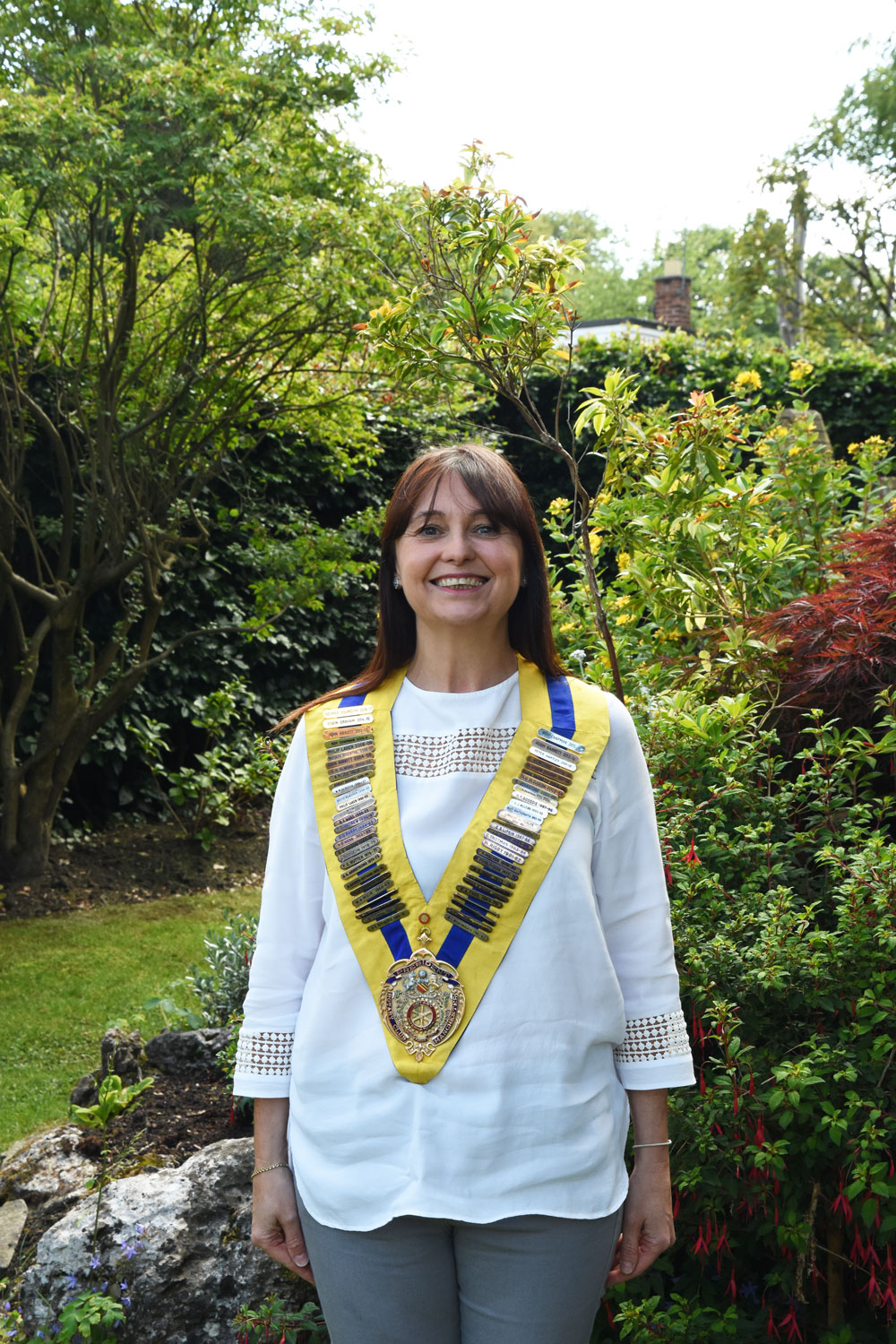 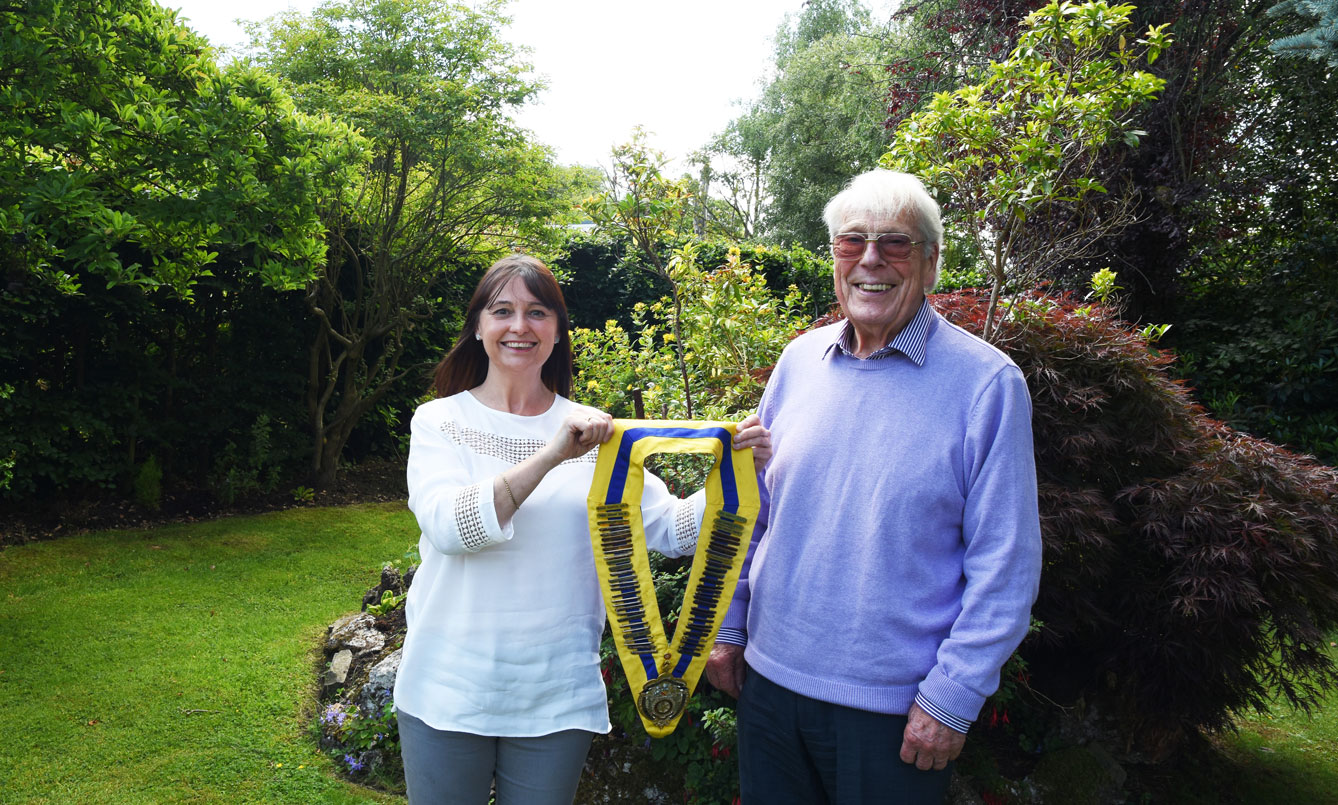 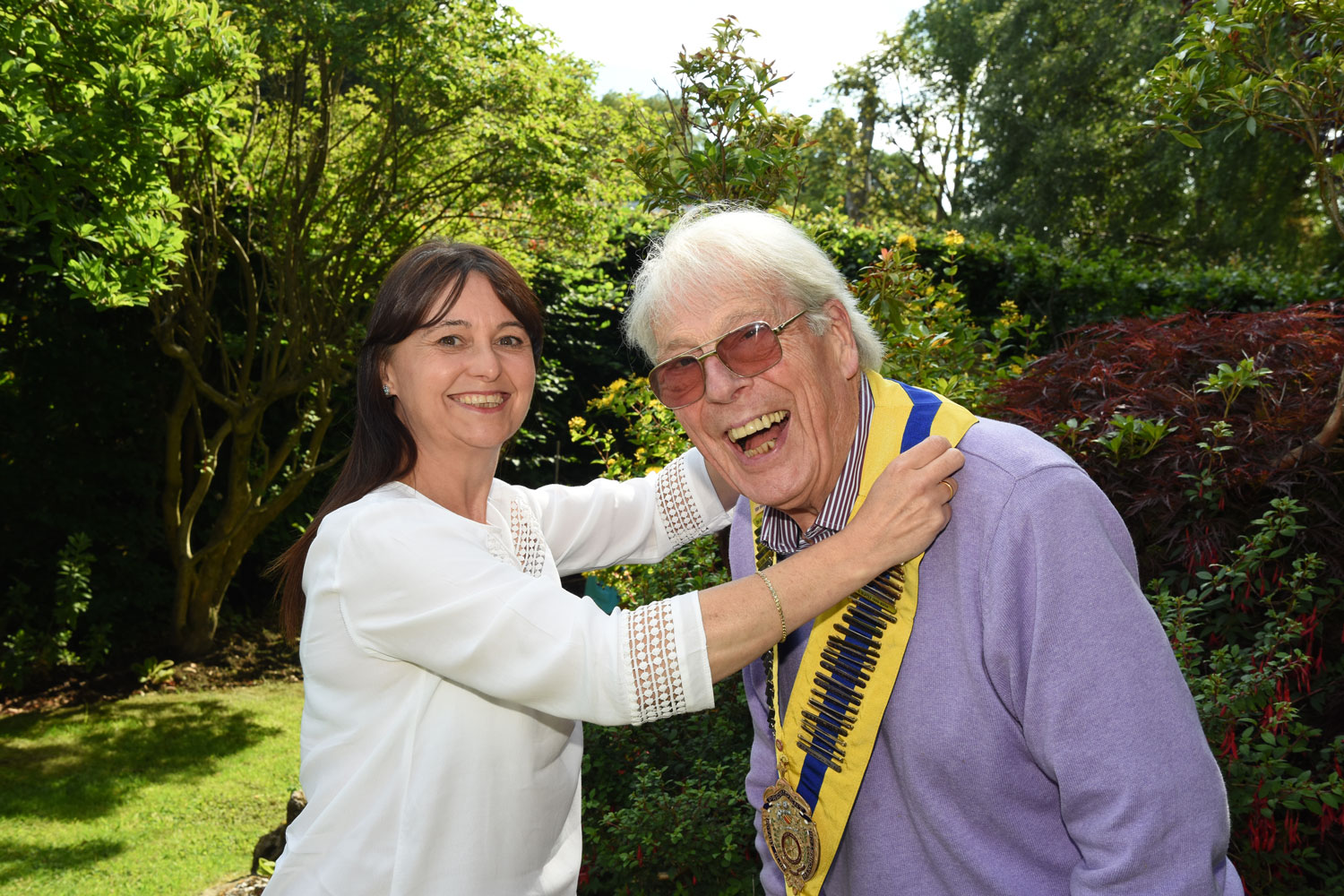 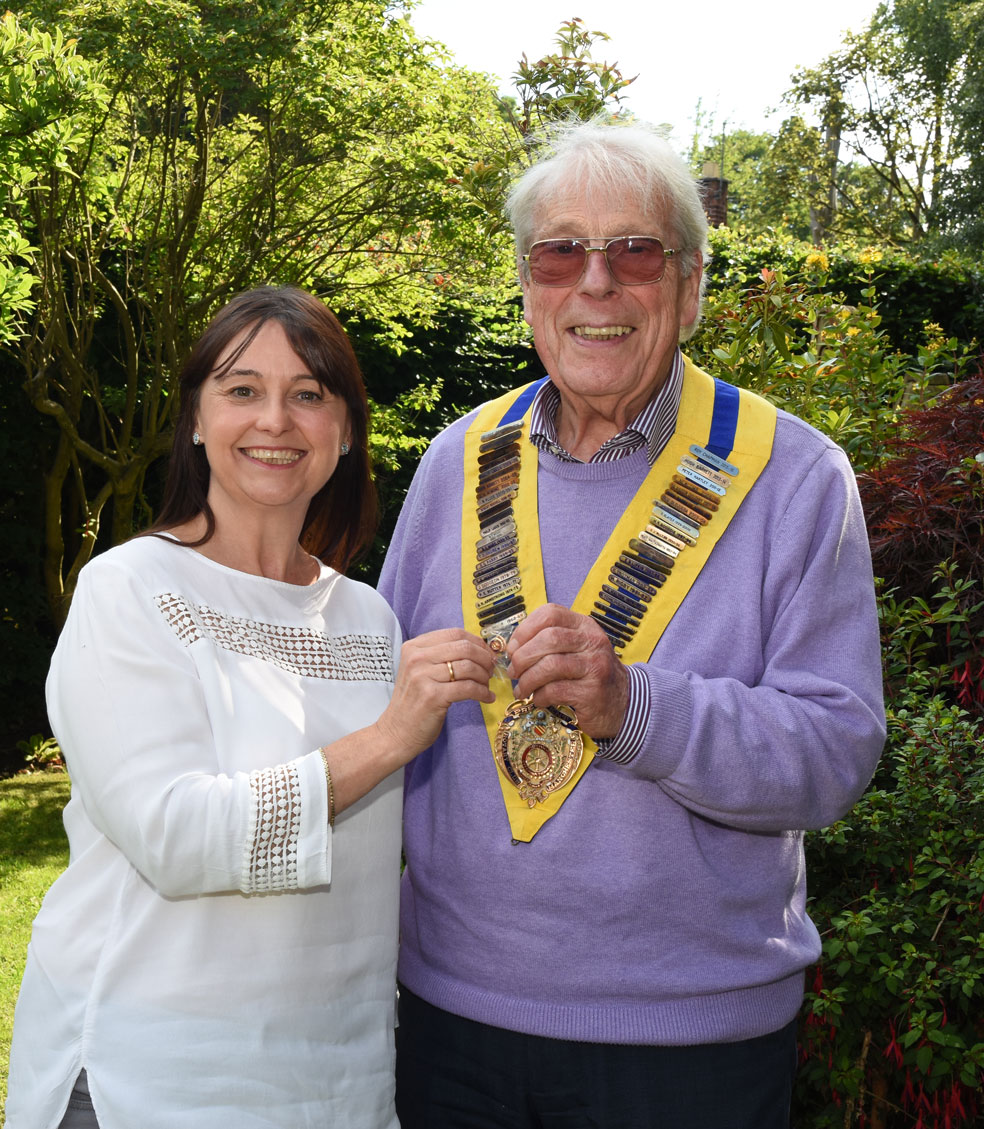 DUE TO THE CORONA VIRUS ALL ACTUAL MEETINGS CURRENTLY ARE CANCELLED

Past President Robin Graham gave members an update on this important project that the club has been involved with for quite some time. Robin gave an most interesting presentation supported by some videos taken whilst visiting the village of Ho in Ghana . He had meetings not only with the villagers but with Members of the Rotary Club of Ho and Water Board officials in order to try and overcome all the many problems that this project has encountered. Vote of thanks was ably given by Club Chair of Foundation , Bill Laidlaw and the meeting chaired by 1st VP Sarah Withington , who is seen in the photo with Robin. 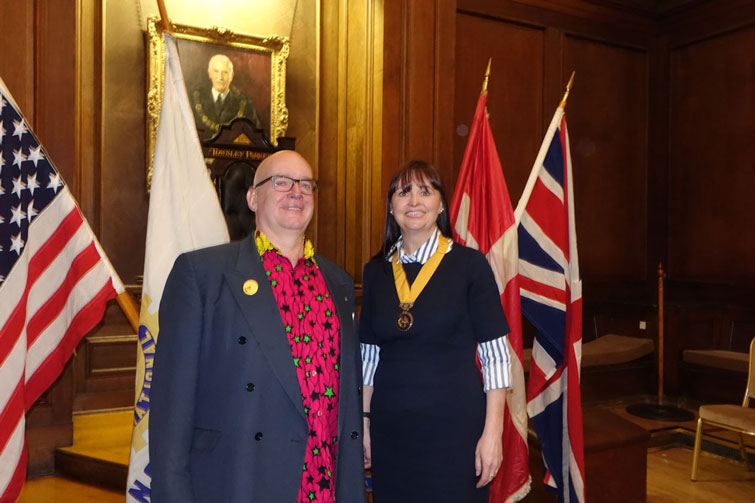 This week the Iconic steam engine is back in Manchester for the first time in over 180 years ! It is at the Museum of Science and Industry in Liverpool Road, which is also the site of the world's second intercity railway station.

Rocket's triumph here on the world's first intercity railway laid the foundations of train  travel as we know it. Built by Robert Stephenson , it ran on the Liverpool and Manchester Railway engineered by his father George Stephenson. Rocket's design formed the basis for all future steam locomotives. 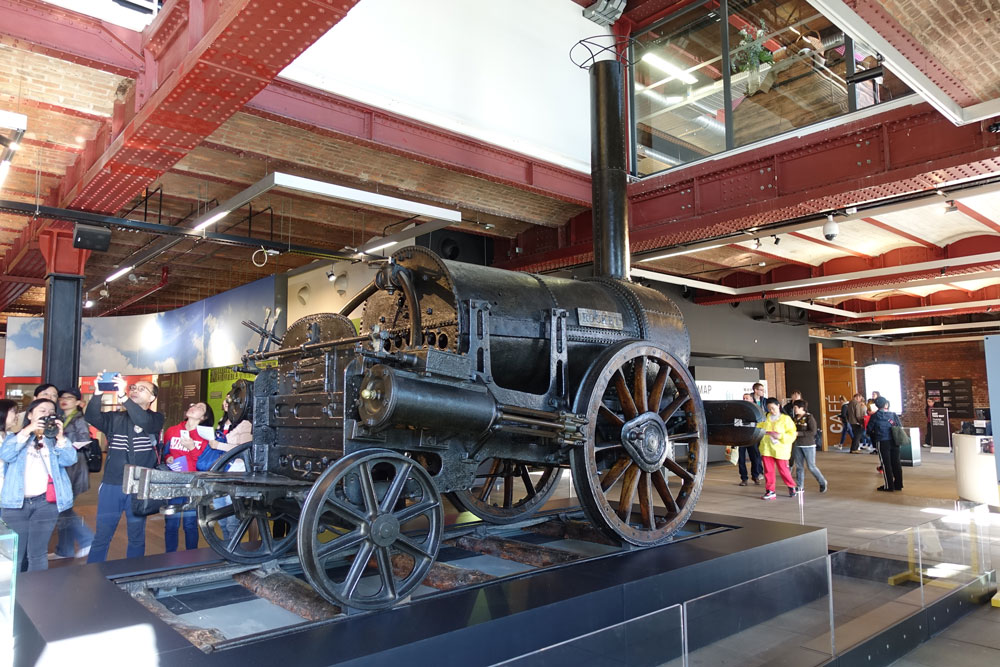 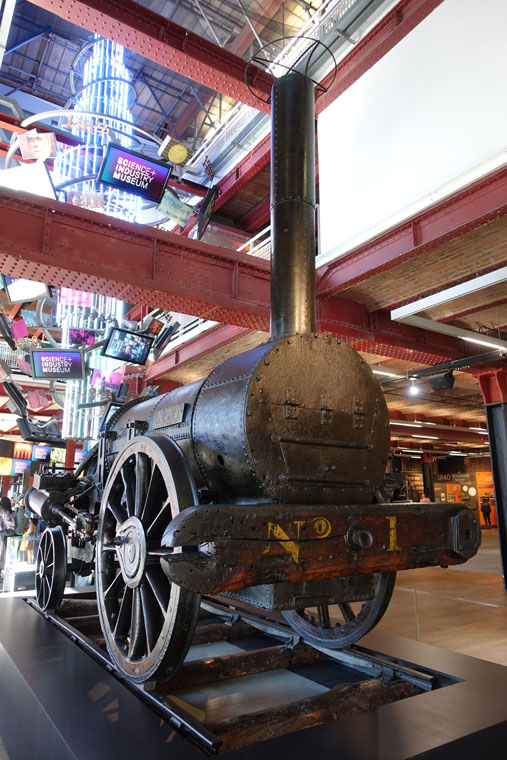 The Lord Mayor of Manchester, Councillor June Hitchen , was our guest today . She gave a splendid talk on her upbringing and family life in Newton Heath ,the area where she has now represented as a Councillor for the last 16 years. Personal stories that have made her family proud of her and she to be proud to be Lord Mayor of such a wonderful and varied City. 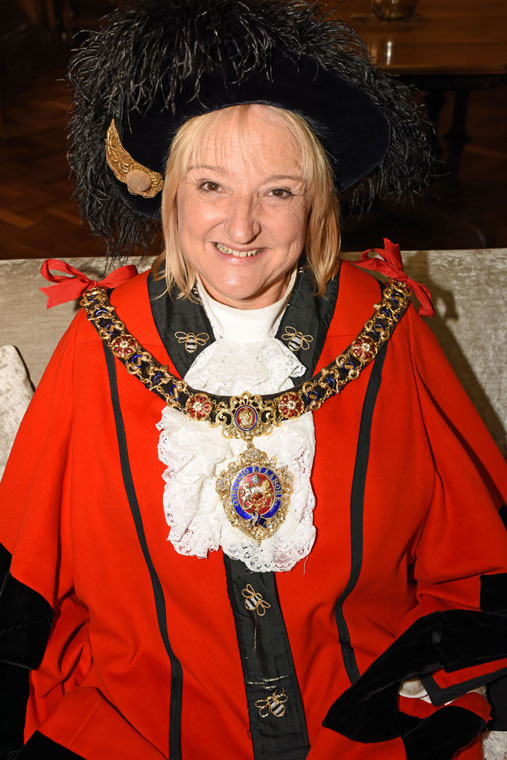 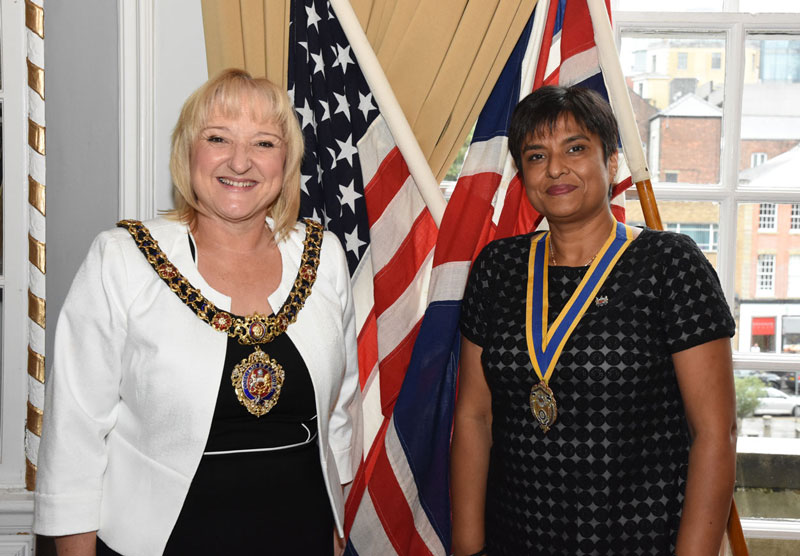 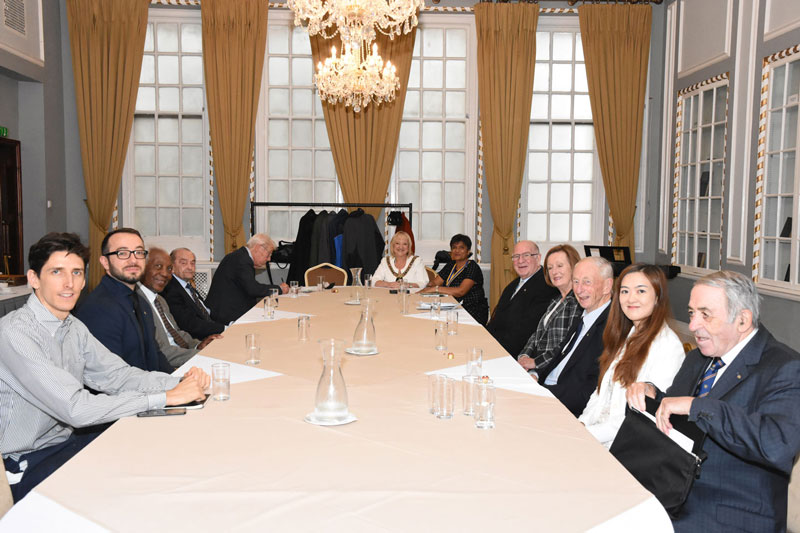 Ross Miller,Director of Fundraising and Communication,  gave us a most interesting and informative presentation of the "Missing Person" Charity. A Charity that he has worked for the last 15 years and is very passionate in helping persons and families live with or overcome the effects of a missing family member or friend . There are 190,000 person missing each year and they offer a lifeline . Missing People is the only charity in the UK which is dedicated to bringing missing children and adults back together with their families.

Some missing people you will have heard of , but many more you won't. For their families , life can feel like a desperate and unbearable struggle as they wait for days or even years.   https://www.missingpeople.org.uk/ 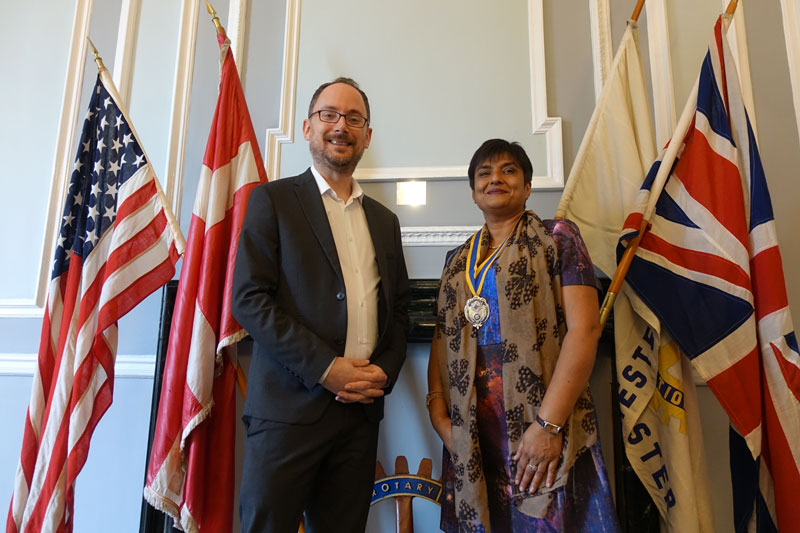 PP Robin Graham  gave a talk  entitled "Does  Laughter pass the 4 way test? " Checking it out after the meeting is President Siddika Ahmed with PP Robin !! 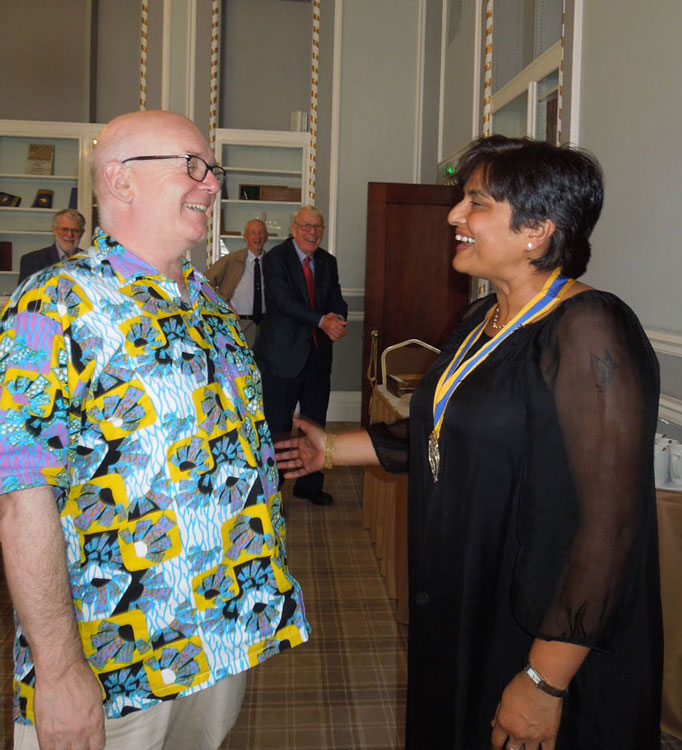 On Sunday 29 July 2018, the third annual 'Peace and Unity event took place at Manchester Reform Synagogue. The event was a free multi-faith/ community event which aimed to bring people together to celebrate our cultural diversity. The programme included guest speakers, musical performances, comedy, song, dance, activities for children, yoga and meditation.PP Robin Graham arranged for the Rotary Club of Manchester to be represented at this event 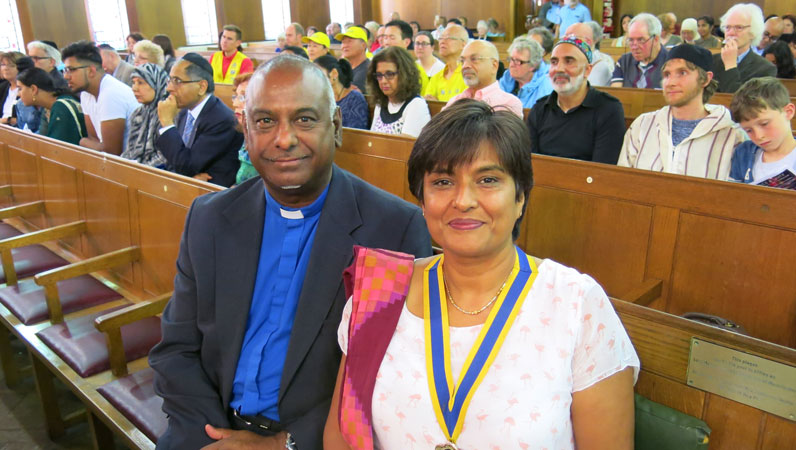 On the 26th July, fourteen International students , hosted by Rotary at the Summer Camp at The Pettypool Trust , Sandiway , made a visit to Manchester .During the morning they enjoyed football training . Then 1st VP Sarah Withington arranged for them to meet the Lord Mayor of Manchester, Councillor June Hitchen at her temporary offices (whilst the Town Hall is closed for refurbishment) within Central Library . The students enjoyed their visit and the Lord Mayor made it extra special as she wore the ceremonial robes ! She even allowed one of the students from Mexico to try the robes on for size ! Minus the very expensive mayoral chain of office !! 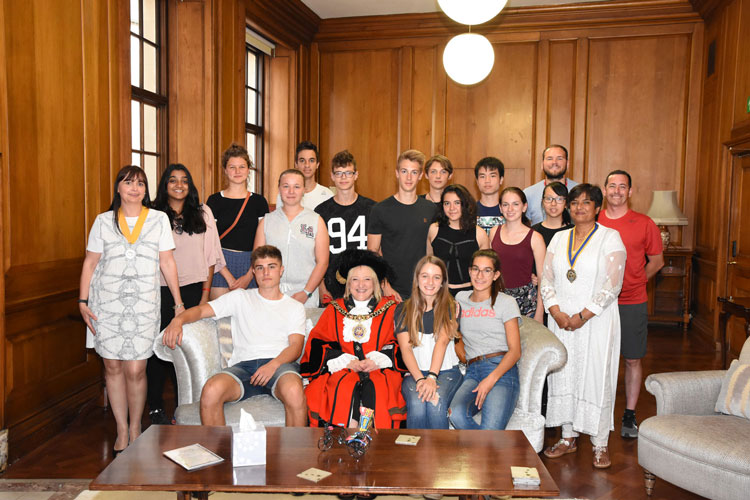 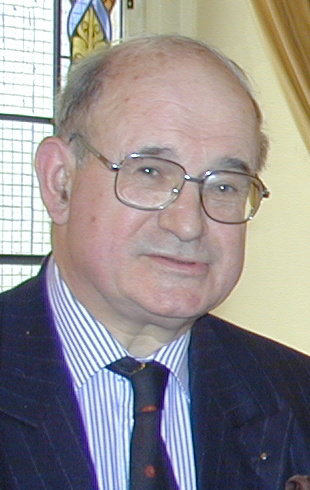 It is with sadness that I have to report that , unfortunately, last night at 23:30h John passed away in the nursing home in Knutsford that he has been resident for the last few months.

He had been a Rotarian for 41 years and was one of the longest serving members of the Rotary Club of Manchester .John  had been President of the Rotary Club of Manchester on two occasions .He had also been the High Sheriff of Greater Manchester in 2000 .  A true gentleman, who will be sorely missed . A family funeral has taken place -however a Service of Thanksgiving for his life will take place on the 31st August at St Mary's,Nether Alderley at 2pm.

1st VP Sarah Withington gave members her "My Job" talk which was a most interesting look at the drugs and medicines that her company , Alliance Healthcare, sell to pharmacies up and down the country. A detailed explanation of original and generic drugs and how and why the pharmacies select which ones to purchase !

The photo shows (left to right) 1st VP Sarah , President Siddika and guest visitor Berfu Ulusoy from Turkey . Befu has family in Rotary and is currently living in Manchester doing her internship at the University of Manchester Child Study Centre 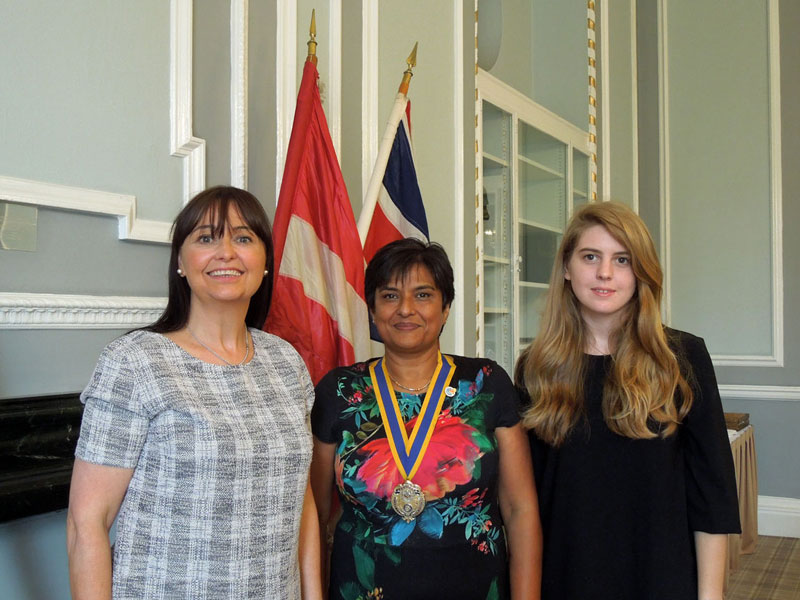 First official engagement  for President Siddika Ahmed was at Inner Wheel of Manchester welcoming their new President - Pat Reynolds by presenting flowers from the Rotary Club of Manchester. Special thanks to outgoing Secretary Joan Johnston for making the arrangements. 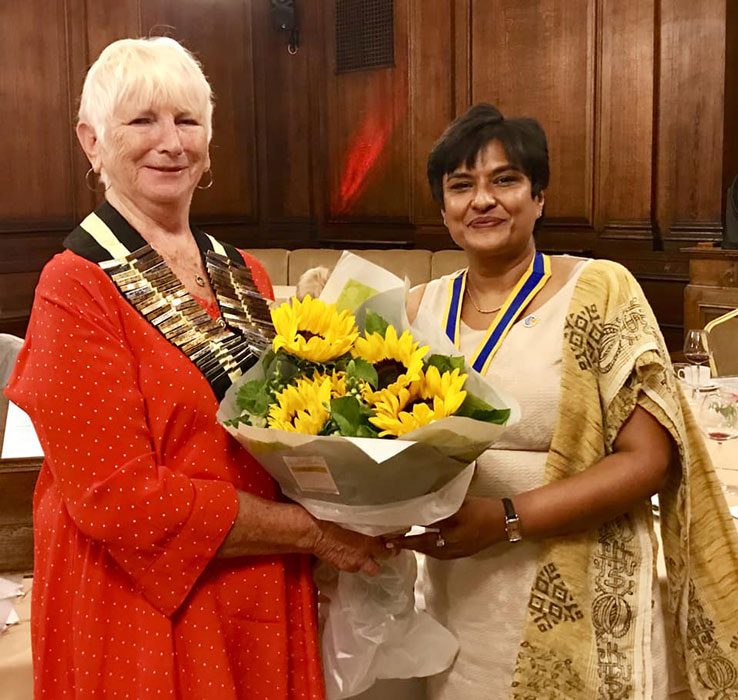 THE LADIES ARE IN CHARGE !!!

More photographs from the evening can be found in the Gallery 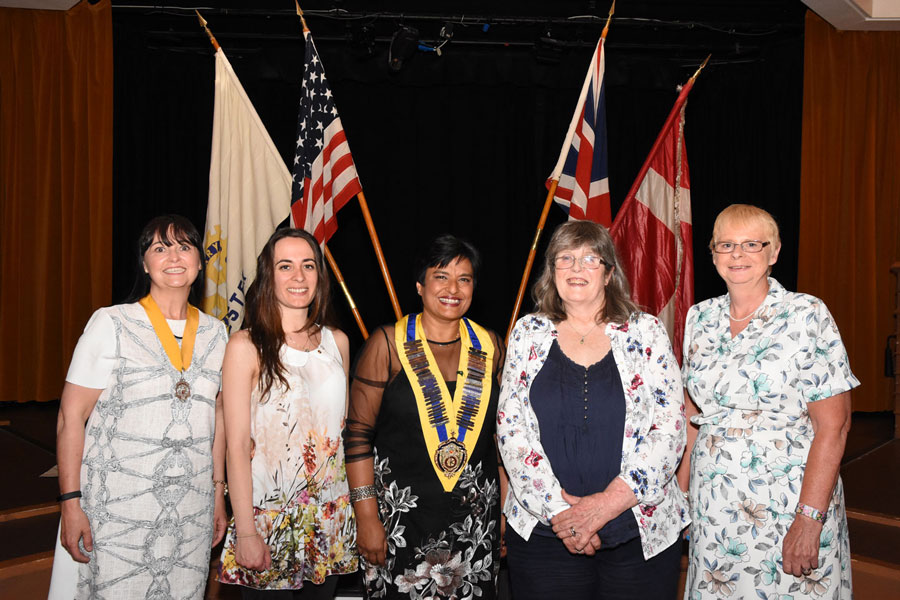 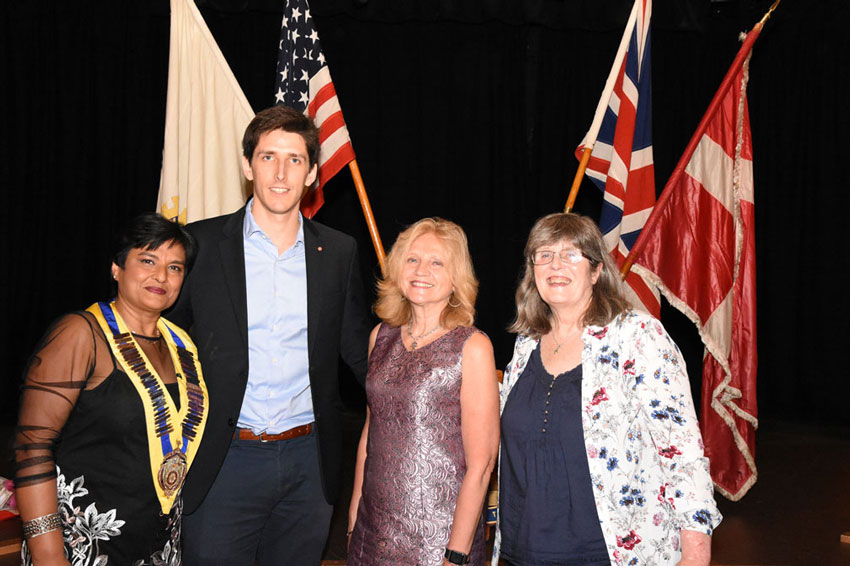 Our Club have started to work with this school and on Friday 28th June 18 they had their school fair. 1st VP Sarah Withington arranged for members to visit .  The weather could not have been better and it was brilliant to see all enjoying themselves. We watched the Irish dancing and choir perform and there were numerous stalls around the grounds . Thanks to Ruth (Head of PE)  for showing us around this school that has 700 pupils ! Shame that more members could not join us
There are more photos in the photo gallery
The next visit will be to deliver the Crocus that have been ordered to educate the children about Polio Eradication and Rotary's involvement 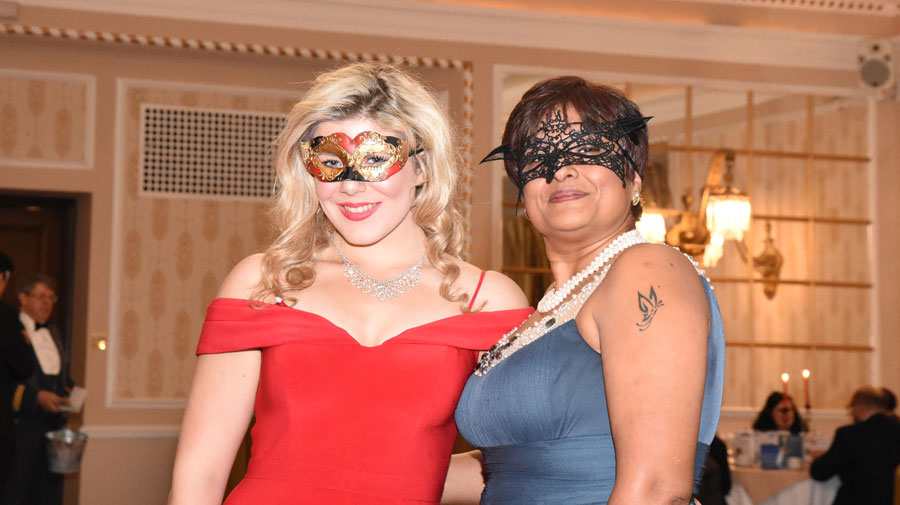 The Rotary Club of Manchester and Rotaract Manchester International  enjoyed the magic of a Venetian Masquerade Ball on Tuesday 17th October 2017. The funds raised will contribute to the WOW water project.

We believe it is not right that children get their drinking water from a pond that cows use as a toilet. But this was the case in the community of Fievie in Ghana. The Chief in the community said," People are now just waiting for God to take them and move them on"

Fievie is one of many communities in South Tongu district where abouy 40% of people don't have access to a permanent source of clean drinking water. In the tainy season, people can collect drinking water from their roof. But for the rest of the time , the local authority hasn't enough money yo connect these communities to the water mains. Water from the nearby river is too polluted; and because the area is close to the sea, a borehole brings up salty water.

The situation in +Fievie has improved. People don't have water in their homes, but there is a connection to the mains supply that works for much of the time, and six stand pipes where people can get access.

The money raised from the project will go towards installing large polytanks to store water for when it is not flowing through the mains,and to start to connect outlying villages to the mains

Each year, in April, the Stroke Association, the Rotary Club of Manchester, St John Ambulance and the University of Manchester School of Nursing and Midwifery and the MLP, join together to hold a Know Your Blood Pressure and Stroke Awareness promotion in Manchesters Arndale Centre, we hope by offering free blood pressure checks and health advice to members of the passing public, to raise awareness of Stroke and its effects; Stroke can happen to anybody, at any time, although lifestyle and age may contribute to the likelihood of stroke, children and young people may also suffer.

Each year an estimated 150,000 people in the UK have a stroke

Stroke is the third most common cause of death in the UK, and the leading cause of disability.

The whole event is run by volunteers, and the MLP volunteers, both medical and non medical students, make a significant contribution to the success of the promotion, medical / nursing students to take blood pressures, and non medical students engaging with members of the passing public, encouraging them to have a free blood pressure check, followed by health information and how to recognise the signs of stroke. A full pre-event induction is given, and the whole event is supported by comprehensive Public Liability Insurance. On average we test around 525 people, of these some 15/20% will register abnormal readings, and will be signposted to an on-site doctor, and usually advised to see their own GP within one month, however, around 5% of the total tested, register severely abnormal readings, the advice then is to seek medical help within one week, in recent events however, two gentlemen (one under the age of 30) were found to be so much in danger of cardio-vascular attack, that immediate hospital admission was advised.

As you can see this promotion is a significant contribution to Public Health, and the MLP volunteers from previous events have always given positive feedback about their experience.

If you want to help in April 2019 , please send an email using the contact us on the home page and we will get back to you