The annual team swim to raise money for local charities 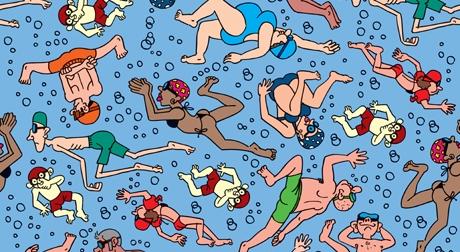 Make a note in your diary:

Because these are the dates of the 2016 Rotary Swimarathon.

The Rotary Swimarathon is a community event where teams of up to 6 people of all ages and abilities, swim in a relay for one hour.

d in excess of £3,000 was raised through sponsorship.

Registration for the event is free but we expect each swimmer to raise at least £40 in sponsorship.  Money raised goes to local and Rotary charities.  Additionally, all teams will be able to nominate their own projects or chosen charity to receive up to 50% of the sponsorship they raise.

We are expecting over 50 teams to enter so get your team together and register asap. See the website or contact Rotarian John Roy on 07808 986018 for details and registration instructions.

On Saturday 12th March the four Rotary Clubs in Northampton organised their forth Swimarathon.  This took place at the splendid Chris Moody Centre, which is the Sports Therapy & Injury Rehabilitation Centre at Moulton College, only recently completed at the cost of nearly £9 million.

The Swimarathon is a charity event, where teams of six swim in relay format for an hour.  It is a fun event for all ages and all abilities.  It is not a race or a competition.  All the participating swimmers are asked to get sponsorship from their friends and families.

This year’s event built on our previous successes and we were delighted to welcome eighteen teams consisting of nearly 80 swimmers.  In all they completed 1500 lengths of the 25 metre pool.  This was equivalent to swimming over 21 miles or 34 kilometers, further than the distance from Northampton to Milton Keynes.  After their swim, all were presented with a certificate containing their team photo and medal.  A great time was had by all, with considerable laughter and many smiling faces. We had swimmers from local schools, swimming clubs, the Brownies, the Girl Guides and the Scouts together with teams made up of members from families and friends.  The swimmers were of all ages, with the youngest aged six and the oldest over 60.  This year up to 50% of the money raised by each team in sponsorship goes back to the team, who can donate it to their choice of charity, or even back to their own club or organization.  We were also supported by local businesses who gave generously, as a way of thanking the people of Northampton for their support over the years.  In all we hope to raise in excess of £3,000 for local charities and good causes.