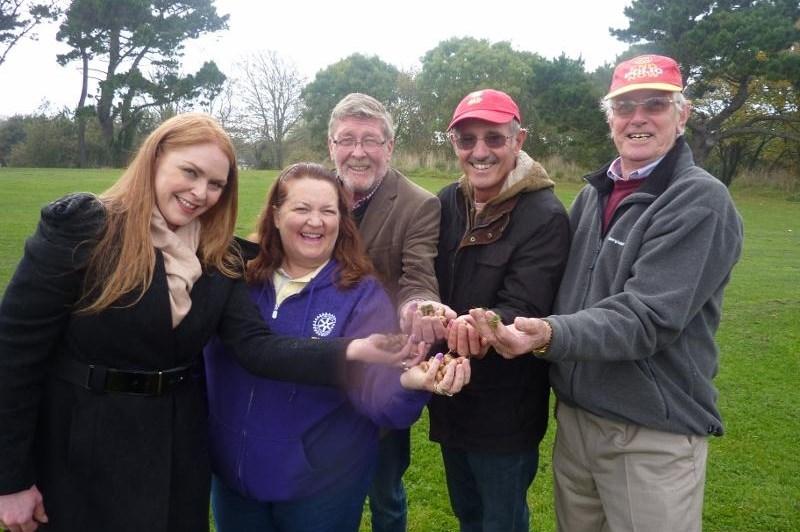 THOUSANDS of purple crocus will be planted in every parish of Guernsey and in Alderney, Sark and Herm to raise awareness of the efforts to eradicate polio.

During November 65,000 bulbs will be planted in a joint initiative between the two Rotary clubs in Guernsey – Rotary Club of Guernsey and Rotary Guernesiais and Floral Guernsey with the cost being covered by Ravenscroft.

‘Rotary has championed the global fight against polio which used to affect over 1,000 children every single day. While the extraordinary work of countless volunteers and health workers over three decades has made extraordinary progress, Rotary will not stop until the world is free of polio,’ said Jannine Birtwistle from Rotary Club of Guernsey.

‘We want to do all we can to remind people in the Bailiwick that polio is still a global issue which can be solved through immunisation and education. Hopefully when all these beautiful crocus flower next year, islanders will be thankful and make a donation towards our efforts.’

In 1979, Rotary as an international organisation, decided to eradicate polio from the Philippines and having achieved that, in 1985 it vowed to free the world from polio. Partnering with the World Health Organisation, UNICEF and the US Centre for Disease Control and Prevention, it set about introducing mass immunisation programmes.

‘In 1985, there were 125 countries across the world, including the UK, where polio was endemic, despite the fact that it costs just 20 pence to vaccinate a child against the disease. Rotarians set about raising US$200 million to not only run mass vaccination programmes but on monitoring and surveillance to find the sources and eradicate them,’ said Jannine, who sits on the national committee of The Rotary Foundation and is the Rotary in Great Britain & Ireland Polio Champion.

Rotary International has since raised US$1.3 billion with a further US$4 billion raised by their advocacy.  Every £1 that Rotarians raise at the moment is matched with a further £2 from the Bill and Melinda Gates Foundation.

‘Just 2 weeks ago the World Health Organistaion confirmed that Nigeria was no longer polio endemic (the polio virus not longer lives in the environment there).  This is a huge achievement and means there are now just two countries out of the 125 where polio remains endemic – Afghanistan and,’ said Jannine.

As part of Guernsey’s fundraising efforts, the two Rotary Clubs launched Purple Pinkie Day five years ago, so named because a purple dye is painted on the little finger of every child who has received the vaccine to identify those who have been immunised. Purple Pinkie Day and other purple themed events have been adopted by many Rotary Clubs across the world for Polio.  In 2011, every region in the British Isles planted purple crocus and a purple crocus buttonhole badge now signifies the Rotary Polio campaign.

‘At a national level we wanted to develop the 2011 purple crocus planting initiative.  This year there will be a million more planted across the British Isles and five million next year.  Rotary’s efforts to eradicate polio are to leave a legacy, not only a polio free world but to develop ways that can be used to fight other diseases. That focus on legacy is shared with Floral Guernsey and their desire to leave a legacy in these islands and so it’s a natural fit to work together,’ said Jannine.

‘The bulbs will be planted in October and November around World Polio Day which is on 24th October.  We hope some will be flowering on Friday 19th February which will be Purple Pinkie Day in the Bailiwick.’

Every parish in the island, together with Alderney, Sark and Herm will be given 5,000 bulbs and Rotary and Floral Guernsey plan to work with their volunteers and douzaines and schools across the Bailiwick to identify places where the bulbs can be planted.

‘This is a fantastic initiative which will not only raise the profile of Rotary’s superb work to free the world of polio but also add a vibrant splash of colour across the whole Bailiwick. One of Floral Guernsey’s primary objectives is to enhance public areas and when Jannine came to us with this idea, we didn’t hesitate to say yes and I’m delighted that Ravenscroft, as a long-standing supporter of Floral Guernsey, has agreed to cover the cost of the bulbs,’ said Floral Guernsey chairman Pat Johnson.

‘We are very privileged in the Bailiwick that we don’t have to worry about our children suffering with polio. That’s not a privilege that every parent across the world has despite the fact that a vaccine costs just 20 pence.  That’s why it is so important to ensure Rotary’s efforts remain in the public eye and that the world soon becomes polio free. Hopefully funding from Ravenscroft, together with the energy and enthusiasm of both Rotarians locally and Floral Guernsey, can go some way to achieving that.’