A Brief History of the Rotary Movement - and our Club


Rotary is a worldwide organisation of business and professional leaders that provides humanitarian service, encourages high ethical standards in all vocations, and helps build goodwill and peace in the world. Approximately 1.2 million Rotarians belong to more than 31,000 Rotary clubs located in 167 countries.

The world's first service club, the Rotary Club of Chicago, Illinois, USA, was formed on 23 February 1905 by Paul P. Harris, an attorney who wished to recapture in a professional club the same friendly spirit he had felt in the small towns of his youth. The name "Rotary" derived from the early practice of rotating meetings among members' offices.

Rotary's popularity spread throughout the United States in the decade that followed; clubs were chartered from San Francisco to New York.

By 1921, Rotary clubs had been formed on six continents, and the organisation adopted the name Rotary International a year later. As Rotary grew, its mission expanded beyond serving the professional and social interests of club members. Rotarians began pooling their resources and contributing their talents to help serve communities in need. The organisation's dedication to this ideal is best expressed in its principal motto: "Service Above Self". Rotary also later embraced a code of ethics, called "The 4-Way Test", that has been translated into hundreds of languages.

During and after World War II, Rotarians became increasingly involved in promoting international understanding. In 1945, 49 Rotary members served in 29 delegations to the United Nations Charter Conference. Rotary still actively participates in UN conferences by sending observers to major meetings and promoting the United Nations in Rotary publications. Rotary International's relationship with the United Nations Educational, Scientific, and Cultural Organisation (UNESCO) dates back to a 1943 London Rotary conference that promoted international cultural and educational exchanges. Attended by ministers of education and observers from around the world, and chaired by a past president of RI, the conference was an impetus to the establishment of UNESCO in 1946.

An endowment fund, set up by Rotarians in 1917 "for doing good in the world," became a not-for-profit corporation known as The Rotary Foundation in 1928. Upon the death of Paul Harris in 1947, an outpouring of Rotarian donations made in his honour, totalling US$2 million, launched the Foundation's first program — graduate fellowships, now called Ambassadorial Scholarships. Today, contributions to The Rotary Foundation total more than US$80 million annually and support a wide range of humanitarian grants and educational programs that enable Rotarians to bring hope and promote international understanding throughout the world.

In 1985, Rotary made a historic commitment to immunise all of the world's children against polio. Working in partnership with nongovernmental organisations and national governments thorough its Polio Plus program, Rotary is the largest private-sector contributor to the global polio eradication campaign. Rotarians have mobilised hundreds of thousands of Polio Plus volunteers. In the 1980s, 1,000 children were infected by the disease every day in 125 countries. Today, polio cases have declined by 99 percent, with fewer than two thousand cases reported in 2006. Two billion children have been immunised, five million have been spared disability, and over 250,000 deaths from polio have been prevented.

As it approached the dawn of the 21st century, Rotary worked to meet the changing needs of society, expanding its service effort to address such pressing issues as environmental degradation, illiteracy, world hunger, and children at risk. The organisation admitted women for the first time (worldwide) in 1989 and claims more than 145,000 women in its ranks today. Following the collapse of the Berlin Wall and the dissolution of the Soviet Union, Rotary clubs were formed or re-established throughout Central and Eastern Europe. Today, 1.2 million Rotarians belong to some 32,000 Rotary clubs in 166 countries.

The Rotary Club of Northampton Becket (commonly just called “Rotary Becket” ) was formed as the first Rotary Breakfast Club in the UK in 1988 with 31 founder members. Many of whom are still active members of the Club

We meet at 7.30am every Wednesday at the Overstone Park Leasure Resort Northampton. [You can find the address on our home page]

The Club consists of about 40 like minded businespeople and other individuals who get a great deal of fun in pursuing the objects of Rotary.

Each member has a designated role within the Club and is a member of a committee pursuing one of the spheres in which Rotary tries to help the community, however, on occasions all Club members are called upon to assist in Club ventures.

The principle committees are:

The story behind our name

We call ourselves "Rotary Becket" -after Thomas Becket (1118-1170) who was made Lord Chancellor and then Archbishop of  Canterbury by Henry II. The king’s patronage turned sour when Becket proved too determined in resisting the king’s control over the church. In October 1164 the king and his cohorts attended a Great Council at Northampton Castle,at which the king threw charge after charge at his former friend and counsellor. Finally the charge of treason was made, but  before sentence could be pronounced Becket fled and made his escape to France where he remained for seven years. His return in 1170 led to his murder in Canterbury Cathedral and subsequent recognition as a venerated saint and martyr.

Rotary Becket Members are also thought to be determined and independently minded and like to do what they think is right for the community of Northampton.

To view the Profile of our Club 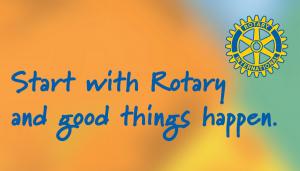 Join Rotary and make the world of difference!

more Join Rotary and make the World of Difference! 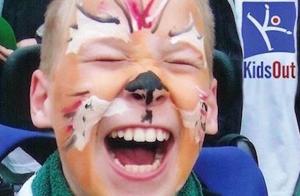 Who have we supported locally? 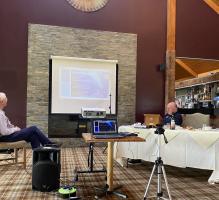 Wednesday Meetings Are Now Hybrid Making It Easy To Join Us!

more During the emergency, instead of meeting at Overstone for a Breakfast Meeting each Wednesday we had been meeting on line via Zoom but from July last year we returned to meet in person at Overstone Park but the added option to join us via Zoom 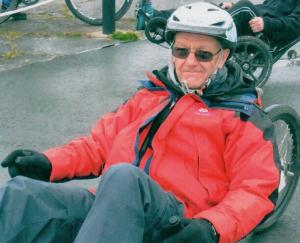 more Every year we take young people with disability on an outward bound type course in the Lake District. if you think you would qualify please let us know

back Thank you for visiting our site. Do spend a little time finding out what we get up to