President Ed Harrison presented a cheque for Â£2,480 to Quilters school"™s RotaKids President as the final instalment to fund its "Quiltonians" radio station. 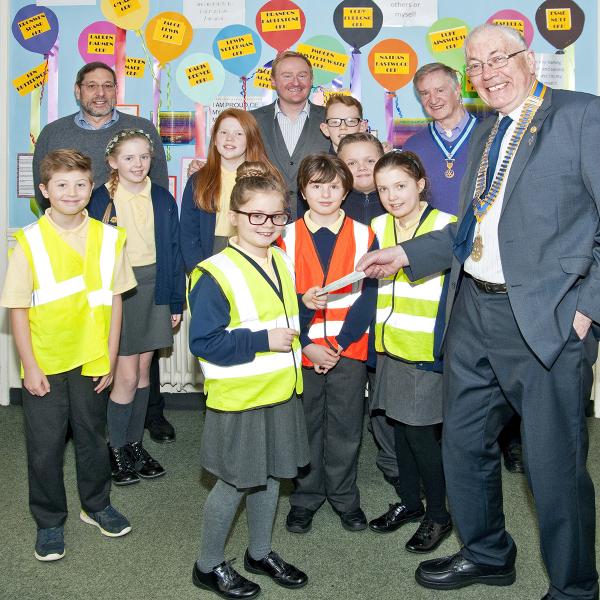 Wednesday, January 20 was a red-letter day for Quilters Junior School – and for us.  It saw President Ed Harrison present a cheque for £2,480 to the school’s RotaKids President as the final instalment to help them establish their ambitious and successful “Quiltonians“ radio station. Having launched the thriving RotaKids Club at the school in November 2014, we initially donated £1,572 to help the station purchase the sound-desk needed for it to be set up. But the balance of the equipment required had been funded from school funds. This needed to be replaced since it was from the funds dedicated to books and learning materials.

On that basis we applied for a Rotary District Grant and, happily, it was agreed. Current District Youth Service Chairman and Past District Governor Peter Dowse, who had presented the RotaKids Club charter in 2014, attended the cheque hand-over at the school’s morning assembly and spoke about how District funds work.

The station records and broadcasts every two weeks with the help of a technician on loan from PhoenixFM. Each broadcast is approximately an hour long and a mix of stories, interviews, jokes and features compiled and recorded by the pupils. Major interviewees have been local MP, John Baron, snooker legend Steve Davies and Lauren & Lewis Platt (X-Factor and Britain’s Got Talent finalists).

In our application for the grant, we stressed: “As the first chartered RotaKids club in our District, we should support its first major initiative. We want the club and the radio station to succeed and, having seen the enthusiasm of the Kids in recording and operating the station, we are convinced this is a very worthwhile cause which Rotary in our District should support.”