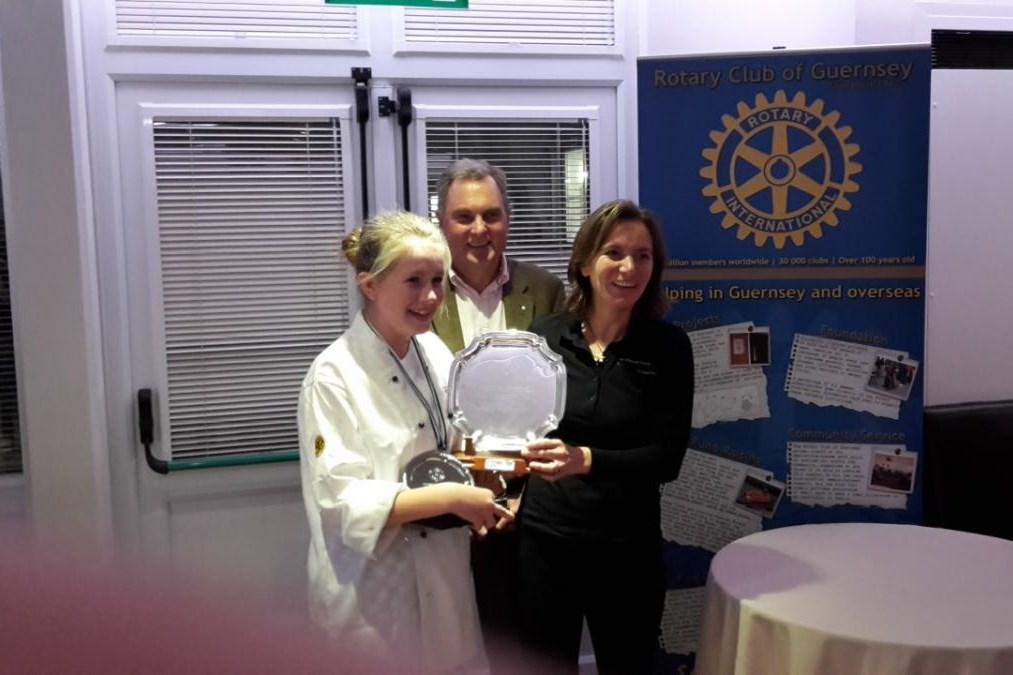 A PUPIL from St Anne’s School in Alderney will represent the Bailiwick of Guernsey in the district final of the 2016/17 Rotary Young Chef Competition.

Poppy Taylor, 14, who has been cooking since she was eight, made a three course menu to take the top spot at the local final, held at the College of Further Education. Her starter of Alderney crab cakes with a coriander mayonnaise was followed by salmon fillet with sautéed sweet potatoes and mixed buttered vegetables and finished with a chocolate fondant with mixed berries and vanilla ice-cream.

‘It is a great shock and honour to be chosen as the competition winner and I am looking forward to representing the island in the next round of the competition,’ she said.

Poppy started cooking dishes with her father and baking cakes with her mother and although she is doing a GCSE in cookery and works weekends at Braye Beach Hotel, she wants to be a midwife. Her mother Jeannie said that she had practised her menu a lot at home and made the dessert for a dinner party which her parents held.

Grammar School student Tilly Hutchinson was named runner up, and other prize winners were:


The event was judged by Stephen Scuffell, executive head chef at Crown Moran Hotel in London, Anne Ewing from the College of Further Education board of governors and Environmental Health Officer, Charlotte Jones.

Mr Scuffell, head judge, said the standard of the competition went up each year; the three criteria for the competition – does it look good, does it taste good and could I sell it in a restaurant – were achieved by all 12 finalists, he said.

Nathan Silk, one of the event organisers from the Rotary Club of Guernsey, added: ‘All students taking part excelled themselves, they should be very proud. I would also like to thank the College of Further Education, particularly Steve Bacon and Julie Hyde, and our sponsors, The Channel Islands Co-operative Society, Industrial and Leisure Clothing and Aurigny. Without our sponsors we simply could not hold this competition.’

Tanya Dorrity from main sponsors, The Channel Islands Co-operative Society, said she was inspired by the standard of cooking she saw at the event.

‘The students themselves showed a level of commitment and maturity

6 Schools are again participating and the practice session allows students to demonstrate the menus and familiarise themselves with the College of Further Education kitchens.

Steve Bacon and the team have provided some tips and support to allow students to develop their menus before the final next week.

Good to see the level of support again for the competition and many thanks to Nathan Silk for all the arrangements made.

Thanks are due to the College of Further Education and also to our sponsors The Channel Islands Co-operative Society, Industrial and Leisure Clothing, and Aurigny.