"It's the taking part that matters..."


For several years, we have entered teams in the District Sports competitions, both in the old District 1140 as well as the new district 1145 (both having about 50 member clubs).
The new District has given us a chance to meet more clubs that are geographically quite close to us, such as Caterham, Oxted, Redhill and Reigate.

The district offers 12 sports altogether, ranging from the cerebral (such as Bridge and Quiz), to the more active (such as Darts and Snooker). Most involve teams of two, but Darts and Quiz have teams of four. (NB it is possible to enter more than one team in each category).

Over the past few years, the number of members participating has risen each year. In the last Rotary year, 2016-17, eighteen members took part in 9 teams in six different sports (Quiz, Darts, Snooker, Table Tennis, Cribbage, Dominoes).

These District matches, particularly in the 4-person teams such as Darts and Quiz, have always encouraged fun and fellowship between clubs, which is one of the aims of Rotary of course. There have been many social evenings (with light refreshments provided by the home team), enjoyed by all who took part, regardless of the outcome of the match.

We have always taken the view that it is the taking part that matters, which makes it easier to bear when we lose! But, having said that, two of our teams managed to reach the final of their particular sport in the last Rotary year. 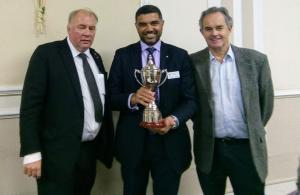 more Winners of the District competition.