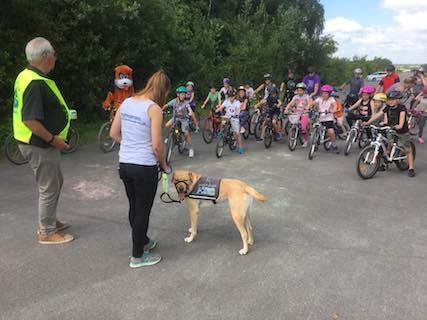 We were joined by teenager Sophie who suffers from the disease, together with her working dog ‘Scoobie’.  Sophie was and still does suffer from Hypo attacks, when her blood sugar levels are either too high or too low. Before she had Scoobie, Sophie needed constant adult supervision, because if she was alone and suffered an attack the consequences could have been fatal.

Scoobie now looks after her and if he can detect minute changes in her blood sugar levels, warning her of danger and bringing her ‘bloods kit’ to her.

These dogs cost £8000 to train in their lifesaving work – the sponsorship money raised will help in training more dogs to help more youngsters  like Sophie being able to live a normal life.

The children who took part seemed to really enjoy the event  which took place in brilliant sunshine and temperatures approaching 25C.

Deal Rotarians worked tirelessly as track marshals, they recorded when children reported for the event and our first aider managed to apply two sticky plasters for minor scrapes – the event demonstrates to the local community how Deal  Rotarians working together make a real difference.