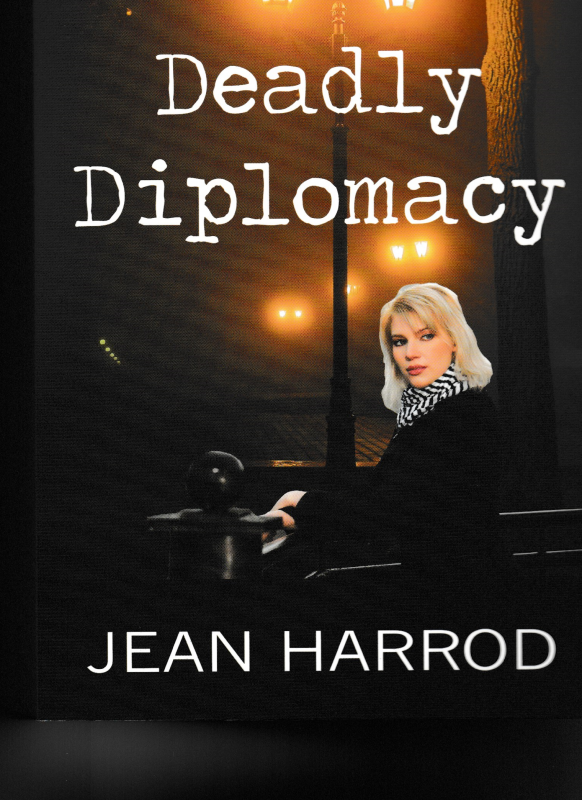 Mrs Harrod regaled us with tales of her adventures as a diplomat, traveller and author. When living in Harrow as a young woman she had an interest in travel and thought of becoming an air hostess – as a way of travelling and seeing the world.  A talk by a foreign office official opened her eyes to an alternative route to travel and (as it turned out) adventure in the diplomatic service. Jean had to pass numerous tests before embarking on her (first) career as a diplomat.  To her disappointment she was not allowed to travel to exotic foreign parts until she was over 21 (women being considered too fragile for foreign work) – so she had to be content with learning the basics of the work from a desk in London.  However, in 1973 an unexpected opportunity arose to participate in a large conference involving a dialogue with 35 countries and with a huge scope covering arms education and economic co-operation. She was obliged to go to Berlin, where the cloud had a solver lining in meeting and getting married to her (fellow diplomat) Jeff.   This brought other potential difficulties as married women were not allowed to work in the foreign office – Jean had several letters pointing this out which she wisely consigned to a drawer for attention in due course.  Come 1975 the sex discrimination act became law so her semi illegal duties were acceptable.  Jeff and Jean continued work in Berlin during the cold war when all offices were routinely bugged, and confidential conversations took place in a sound roofed room! Their next posting was to Peking followed y becoming Consul to Indonesia.  This posting highlighted the Consular role in the protection of British citizens.  The Consul could not help people in trouble to by-pass the local laws and customs but could ensure that they gained maximum help and support within the local environment. The implied a deep knowledge of the indigenous customs, practices and processes. Indonesia with a small population was spread over nearly 300 islands the country was also rife with kidnapping and corruption.  Jean mentioned an incident when days after a burial the of a missing person the deceased walked into the police station – the burial had been the wrong person.  Another time two British citizens had got lost climbing up a mountain and jean went to help the search – and to urge the local police to search diligently and over several days.  Ultimately one boy turned up, but the passport of the other was all that was found – in a river.  Jean retired after a stint in the Turks and Caicos Islands where she negotiated the return of illegal economic migrants to Haiti from whence they came “return to sender !!). She then turned to writing, however she was bound by the official secrets act in writing directly about her experiences.  Her first book “Deadly diplomacy” was a crime novel based in a diplomatic environment in Australia and doubtless reflects much of her working environment, life, experiences and adventures.  This turned out to be the start of a second career as an author, now with four books in the series to her name. A riveting evening which proved all too brief - there was clearly so much more experience and adventure which remained untold.  Thanks Jean – fascinating for all who were there. (PS : If any attendees wish to submit corrections/additions to this report please be in touch.  PVH)