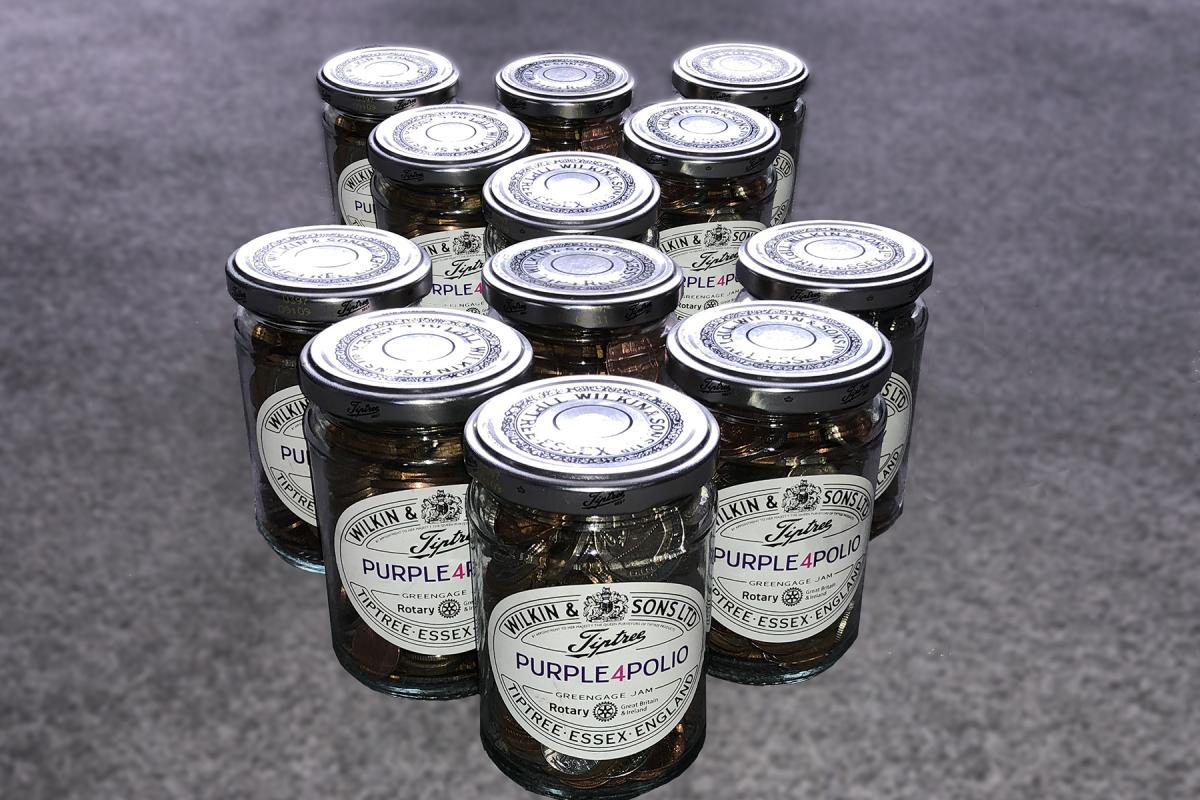 Pot Of Gold Near The
End Of Polio Rainbow

We have just been awarded two polio awards as the club with the greatest number of members who gave USD100 or more to the End Polio Now campaign in a given year and also, the club with the highest contributions per member to Rotary Foundation (Rotary's own charity which manages Rotary's contributions to End Polio) in its District, receiving a "No. 1 Club in District" pennant to that effect - and also receiving a letter of appreciation from the Trustees of The Rotary Foundation.  But that isn't the end of our support for the End Polio campaign.

What do you do with an empty jam jar? Recycle it? Smash it?  Or fill it with cash that can help fight disease?

That's what we, as one of many Rotary clubs, did, responding to the national appeal to provide further support to the campaign End Polio Now. Nearly a year ago we gathered, along with our colleagues from the Mayflower Club, in St Mary Magdalen in the High Street for a Purple for Polio Tea Party.

On the same day Rotarians across Britain and Ireland took a 4.00pm break for tea and jam to celebrate a historic milestone.

The Purple for Polio campaign resonated with the 2017 International Women's Day objectives: 'Be Bold For Change' which dates back to 1985 and the ambitious promise Rotarians made to the mothers of the world that polio would be eradicated and their children would no longer suffer from the life-threatening disease. That promise is on the brink of being fulfilled. 350,000 cases in 1988 has been whittled down to thirty-seven cases in three countries in 2016  to 21 in two countries as we go into 2018.

Never a club to resist a challenge we picked up the baton and ran with it. We can now reveal that our club of just under 20 members raised the sum of £529.86 from filling the once empty pots of greengage jam supplied to District 1240 clubs by Wilkin & Sons Ltd (Tiptree) who, in all, donated 52,000 specially branded jars of either Greengage or Early Rivers Plum jam to every single Rotarian across the UK.
Treasure Mike Ginn said: “I have sent off a cheque for £529.86 and my understanding is that as a result of Bill Gates’s generosity, that sum will be trebled! I regard the amount our members raised as a magnificent total. Well done, everybody.”

And there are still some Jam Jars to come back...