In 2017 Thame Rotary met with some local business people to obtain their views on how they might work together in support of the community. 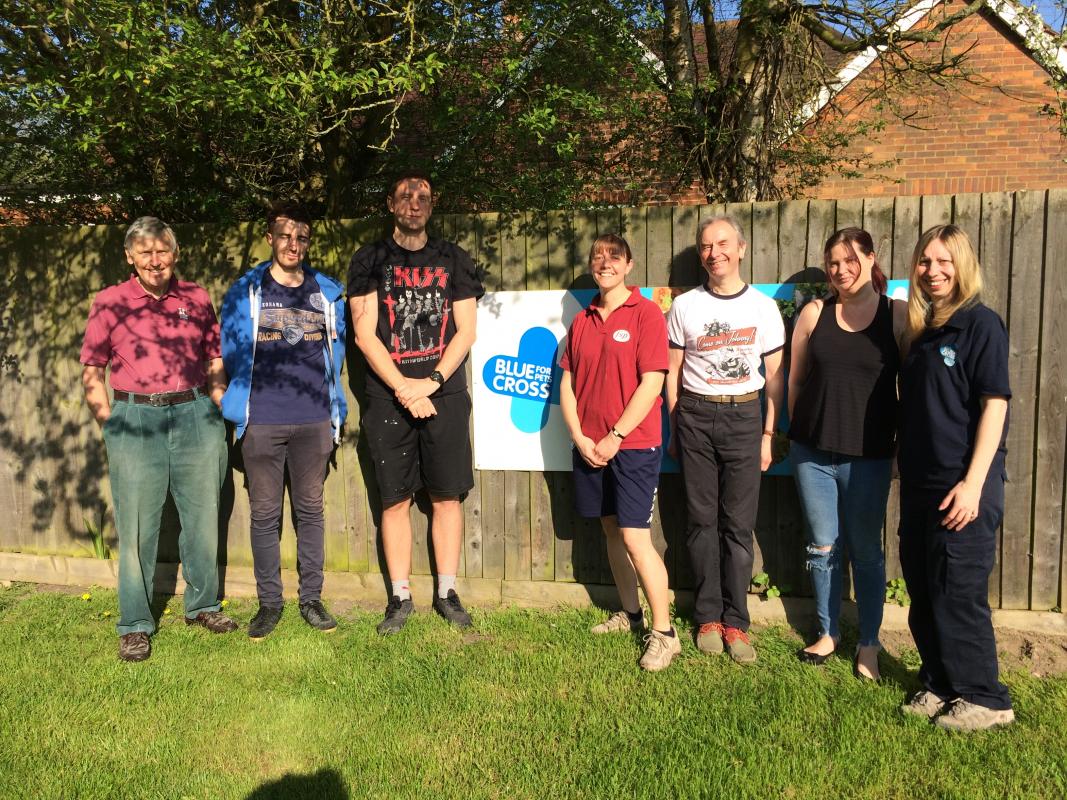 The first project undertaken was at Lewknor’s Blue Cross where two very enthusiastic groups of volunteers from Lucy Electric Ltd and from The Oxfordshire Golf Hotel and Spa, Lightfoots Solicitors and Richardsons Chartered Accountants redecorated the staff room and vets’ offices on 19th and 20th April 2018. During the first day the rooms were prepared including removing wall fixings, repairing walls and sandpapering. During the second day the walls were repainted with emulsion and radiators glossed.

Clare Cruttenden Centre Manager of Lewknor Blue Cross said: “We’re really proud of the facilities that we have for our pets, but the areas used by the team for breaks and to work in were looking tired.  Having these rooms painted makes a huge difference to the dedicated team of staff and volunteers who work hard to care for homeless pets, giving them more pleasant places to work and take well-earned breaks.  We’re very grateful to Thame and District Rotary and the volunteers from local companies for making this possible.”

The monetary value of this first project is estimated at around £2,000 to Blue Cross however, the benefits have not been solely financial. The community has benefited by their being an additional voluntary resource, businesses have been able to contribute to their own community, volunteers have networked with colleagues and employees from other local companies and some have even learned new skills.

“We pride ourselves in being a proactively involved in the local community, commented John Griffith, CEO at Lucy Electric and are delighted to be able to support the Thame and District Rotary Club by providing a team of volunteers to support this worthwhile initiative.”

Jack Armstrong and Bill Heritage of Richardsons Chartered Accountants working on Blue Cross said: “It was great to get involved with this fantastic cause. You don’t always appreciate how volunteering can make a difference, especially when the staff are so dedicated to providing such excellent care to the animals. It’s evident what great work Blue Cross are doing, as a couple visited all the way from Southampton to adopt a dog that had been cared for by the team. We were more than happy to help. “

John Singer added: “The programme has exceeded all his expectations. It seems to have been of great value to the community, and attractive to local businesses and their employees. Thame and District Rotary, with its established links in the community, was ideally positioned to facilitate the programme. This is a perfect example of how Rotary and Businesses, working together, can make things happen and we intend this will be a regular event. This programme is unique in as much that the teams of volunteers are formed from employees from different companies.”

John concluded:” We are looking forward to undertaking our next two projects at Chilworth SEN School and Thomley. In the future we plan to promote the scheme to attract additional companies and would invite charities and similar organisations who have suitable projects to contact Rotary on www.thame.rotary1090.org or connect with us via www.facebook.com/thamerotary .“