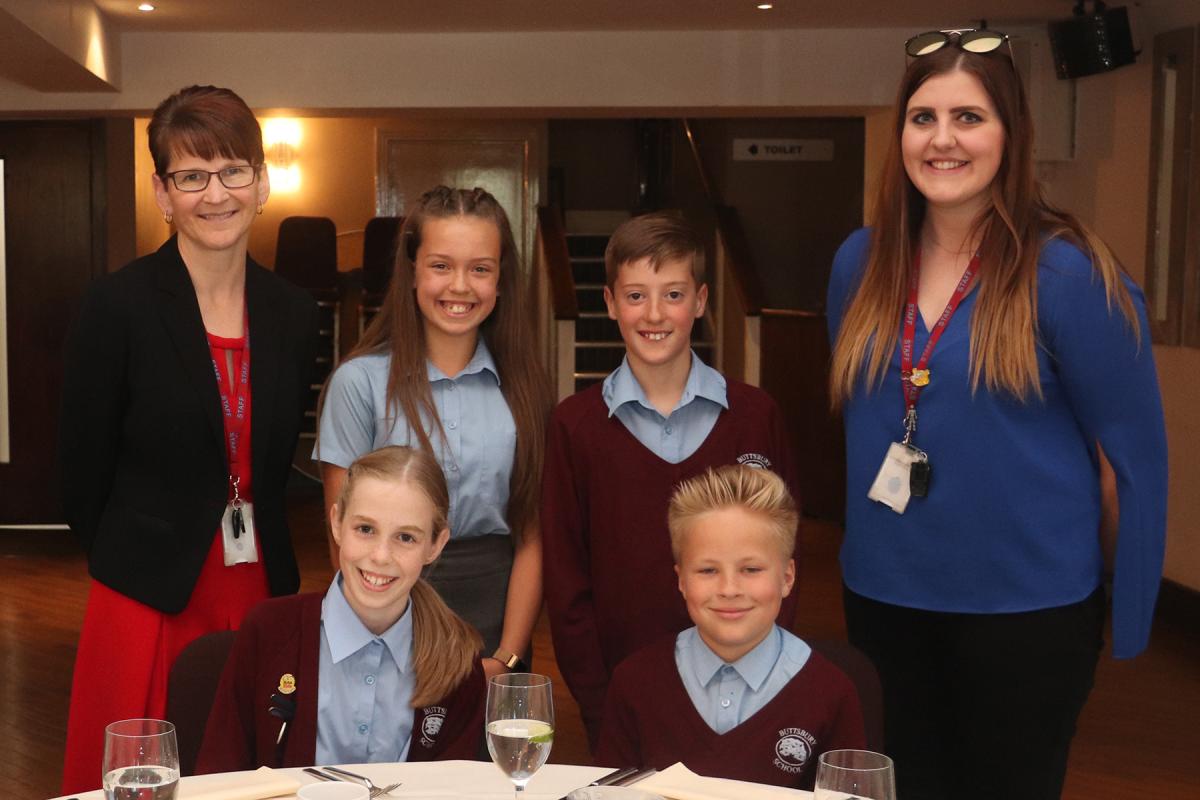 Pressing On - Quilters Shows The Way

As a newspaper man all his life, it is always exciting for our Newsletter Editor, Trevor Bond, to see the future generation getting involved with the Fourth Estate – the power of the press and all that.

So, when Quilters Junior School RotaKids leader Helen Kilby brought along a star cast of pupils to present to us after lunch on June 25, it was a thrill for him to discuss one aspect of their brilliant presentation – the Year 5 four who had worked on their school newspaper, the Q-News featuring Quiltopia.  They did a great job describing how Quiltopia was being developed as part of their school’s outdoor classroom and art gallery, and promoted its benefits.

He may be past modern journalism, but these kids had got everything right.... school news, features, interesting items and a professional outlook on producing a newspaper. They could teach this old hack a thing or too!

In addition to the Quiltopians, Helen brought along the four core officers of the RotaKids, President Marcus, Vice President Esmee, Secretary Fiona, and Treasurer Monty.  They presented their main projects plus their World Cup Day, all to raise money.  Nervous they may have been, but that did not show nor prevent them giving a totally professional presentation.

They listed all those events where they raised money for charity, joined Rotary in doing a great job at the Christmas Market and Soapbox Derby and assured us that they would be volunteering to be with us again at these events in the new Rotary Year.

It was all professional, enlightening and enthusiastic and a tribute to how Quilters and Rotary, through our club, are working so well together.  A delight.

President Peter took the opportunity to hand over a cheque for £1000 in recognition of all their efforts.

In a delightful presentation club lunch on June 18, we welcomed the RotaKids from Buttsbury Junior School along with head teacher Ann Robinson and RotaKids lead teacher, Lauren Pretty.

The Buttsbury party was Archie Walker, Owen Andrews,  Alexa Mann, Isabelle Hoffman (fifth member Dulcie Olufawo was away) who took it in turns to report their achievements stage by stage.  Simply superb!
Who are they?
The RotaKids Club Officers – known as the Core 5
Their projects:

What a wonderful year and a brilliant effort.  An amazing £5997.36 raised in one year!

President Peter took the opportunity to hand over a cheque for £300 in recognition of all their efforts.

Head Teacher Ann Robinson thanked us for hosting them to lunch and paid tribute to the Rotary Club.  “We are thrilled to be involved with such wonderful work the Rotary Club do.”