Austin was introduced to the Centurion Rotary Club of Colchester by his cousin Robert, a Founder Member.  Austin quickly became a much valued member, a committed Rotarian and the best possible exponent of its criteria – service above self, ethics and caring for others.  He was immensely proud to become President in 2011, our celebratory 10th year, whilst still working in his demanding career as a Chartered Surveyor with MLM Structural Engineers and Surveyors, a large firm of great repute in Ipswich, Colchester, Chelmsford and other centres.  When handed the Presidential chain of office he summed up our Club by saying

“Many people regard Rotary as an elite club for old boys who take long lunches.  This Club is the future – dual gender, young, vibrant, meeting at an ungodly hour for a hearty breakfast but achieving so much” and his closing words were well remembered as “I would like to thank you all for trusting me with the Presidency – I am your servant.”

Austin was humble but also great fun and an inspirational leader, allocating roles within the Club with great understanding and thus building a great team for what proved to be a fun year!  We visited our twin club in Tours, France where Austin made a wonderful speech in French (full of English howlers!) and they loved him and have sent many messages of condolence to Austin’s family and the Club. That year we stewarded the arrival of the Olympic torch into Colchester and whilst Helen Chuah enjoyed her Mayoral year, Austin ensured we supported her at many events including the Chinese New Year at the Colchester Town Hall and with a Club visit to her home in Malaysia where we support a Children’s Home and Hospice.  Wilkins Tiptree Jam factory have supported many Rotary events and in Austin’s year they donated their new Tomato Ketchup when Austin arranged a Club Tomato Sauce breakfast which not only covered him in the sauce but raised £800 for End Polio now.  He organised a community garden project at Willowbrook School, Kate’s Barn Dance, Lorna’s Guess Who’s Coming to Dinner and austerity porridge breakfasts for Mary’s Meals when Austin regaled us with his version of Goldilocks and the Three Bears.  Most unusually for Rotary Centurion, under Austin’s leadership, transported, sorted and sold 5000 items of Ann Summers’ underwear, with labels removed to ensure annonimity, and raised large sums of money for charity whilst enjoying much fun and laughter together.  Austin was always supported by his wife, Anne, who joined in many of the Club’s events and visits and continues to be a good and valued friend to Centurion.

As a lasting legacy Austin presented both our Club and our Twin Club of Tours with a brass bell mounted on a beautiful wooden stand made by his son Jonathan.  For Centurions every time we ring the bell, at the start of every meeting, it is a wonderful reminder of a gentle, funny, beloved President and a wonderful Rotarian and a dear friend who is greatly missed.

Austin was diagnosed with bowel cancer some three years ago and despite undergoing radical surgery and treatments, retained his sense of humour and continued to support Rotary as far as he was able.  Austin and Anne also supported funding for CohoC, the proposed new Cancer Centre for Colchester and District, where building is shortly to start.  In January of this year we held a Race Night and with wonderful sponsorship of Austin’s firm, MLM, and the support of many others we raised £4500 for the CohoC fund.  Austin continued to support other members of the Club who were also undergoing treatment and his friendship, love and laughter has enriched all who knew him and has meant a great deal to those of us in Rotary and also in the wider community.  This was reflected in the amazing number of people who came and paid tribute to this lovely man at his Memorial Service, which even whilst suffering, Austin had planned and at which many fond memories were given including a summary of his time with Centurion Rotary Club, his life as an Engineer and Surveyor, his love of playing and listening to music and his abiding love for his family.  He is very much missed and in his own words:

back Our Club was Chartered in 2001, as the first breakfast and dual gender club in Colchester with a similar number of men and women. We pride ourselves on being a forward-thinking, innovative club that puts a large amount of importance on fun & felowship

We also donate monies to various charities from events and collections made throughout the year including - Colchester General Hospital Charity Cancer Support & The 2019 Club, SSAFA, Age Uk (Colchester), EACH abd Building Malawi

Our Club was Chartered in 2001, as the first breakfast and dual gender club in Colchester with a similar number of men and women. We pride ourselves on being a forward-thinking, innovative club that puts a large amount of importance on fun & felowship 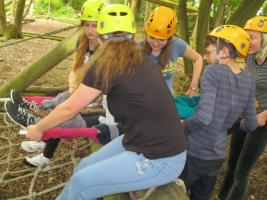 RYLA is a fun based activity course designed to introduce students to and build on their existing leadership skills to enable them to grow as young people and accept responsibility within their own community.

a selection of photographes taken at our events, from formal to social.