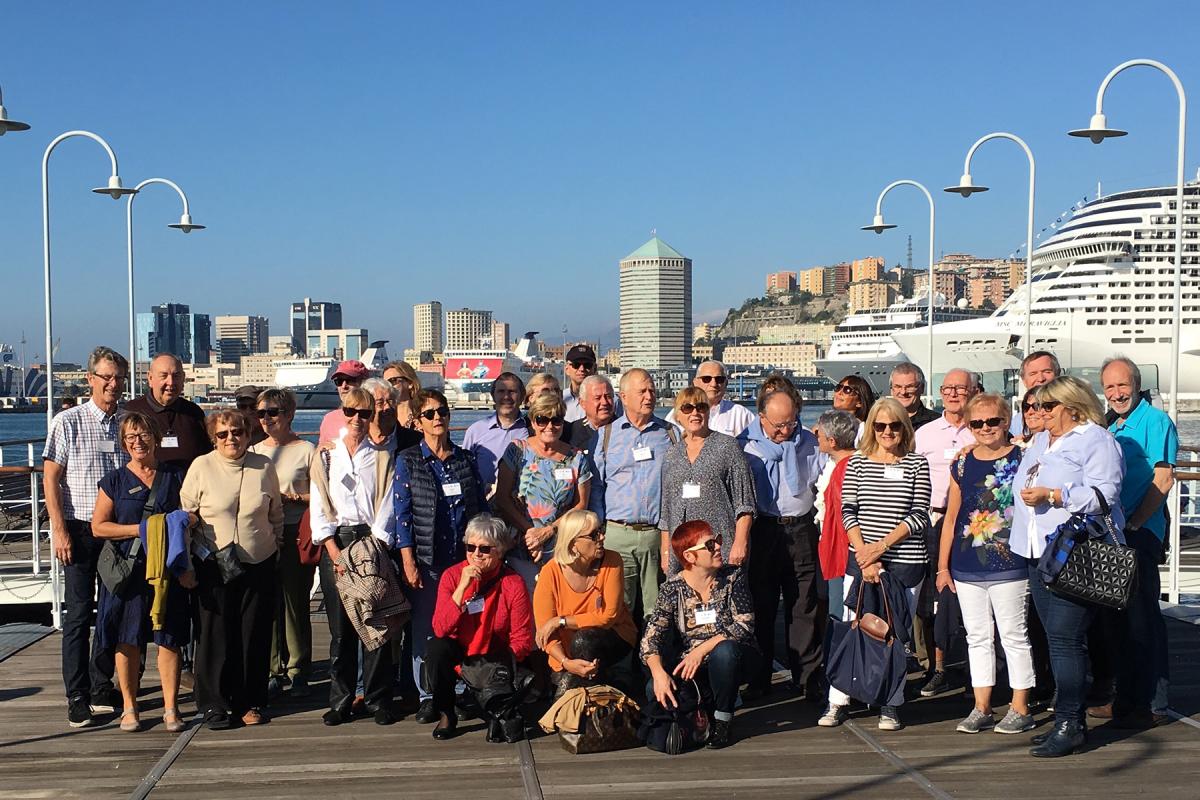 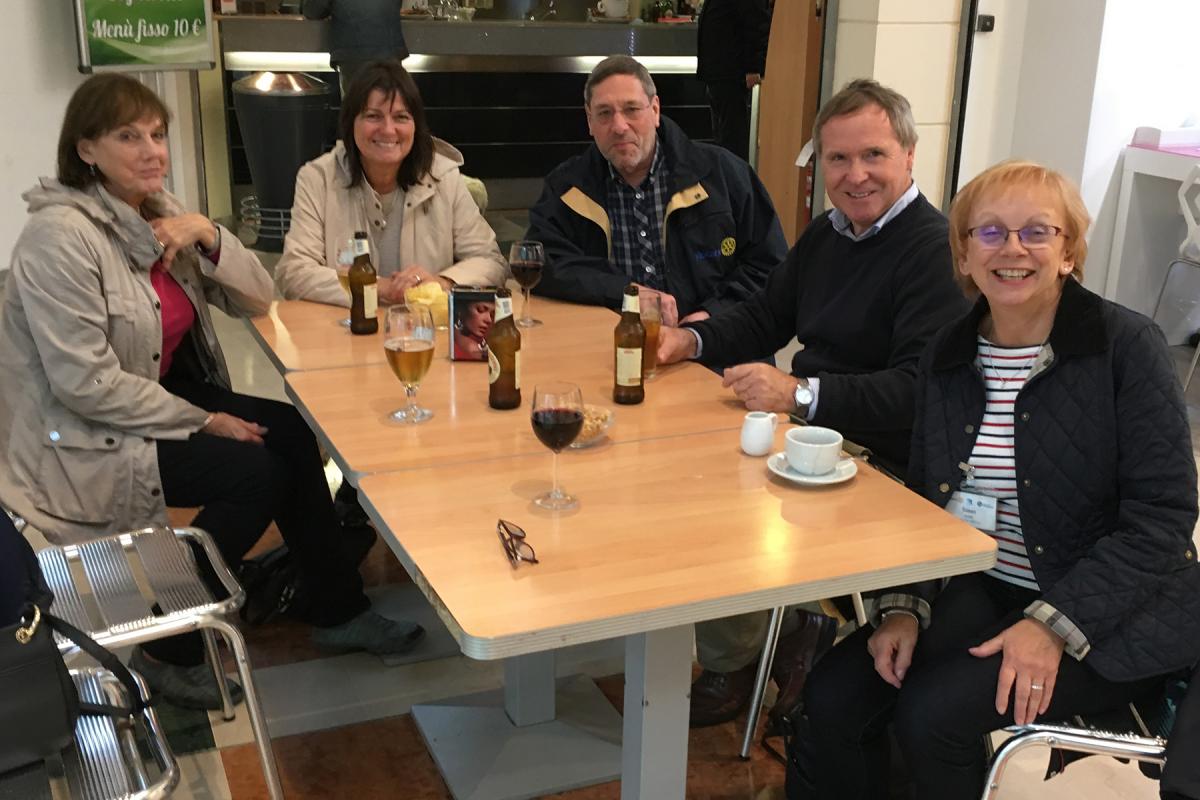 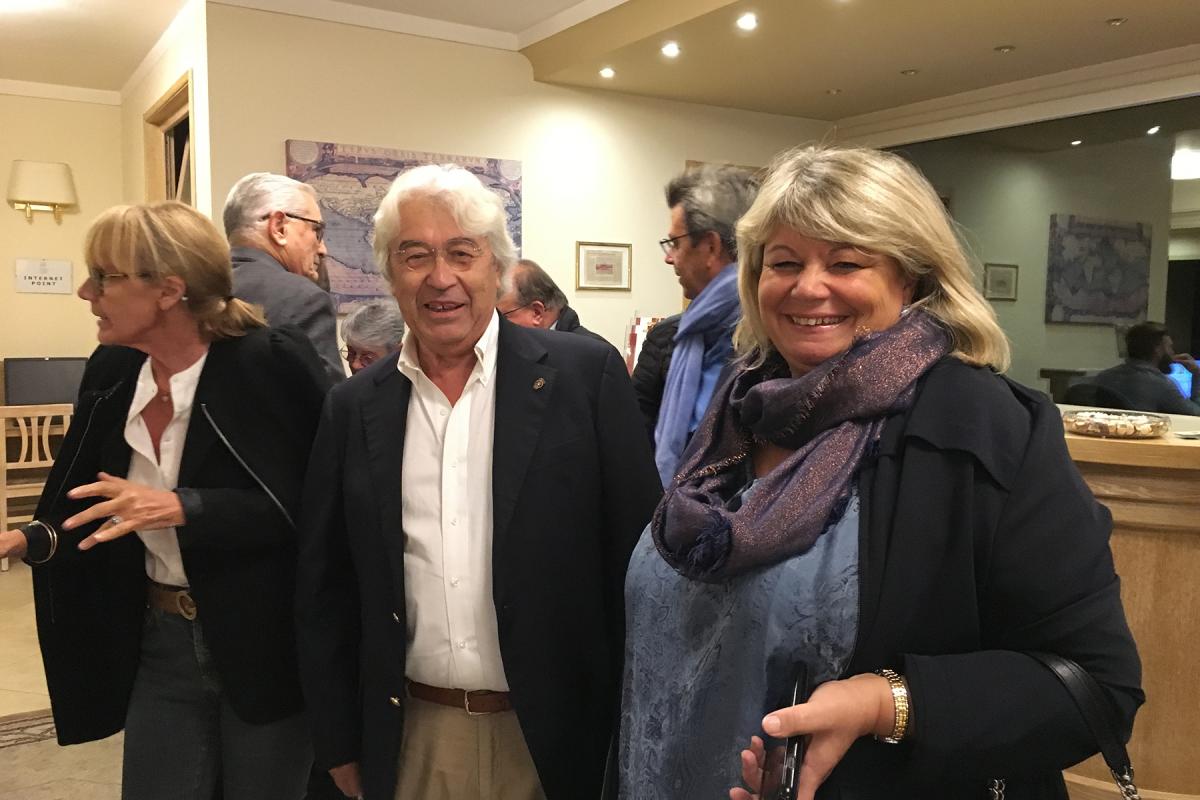 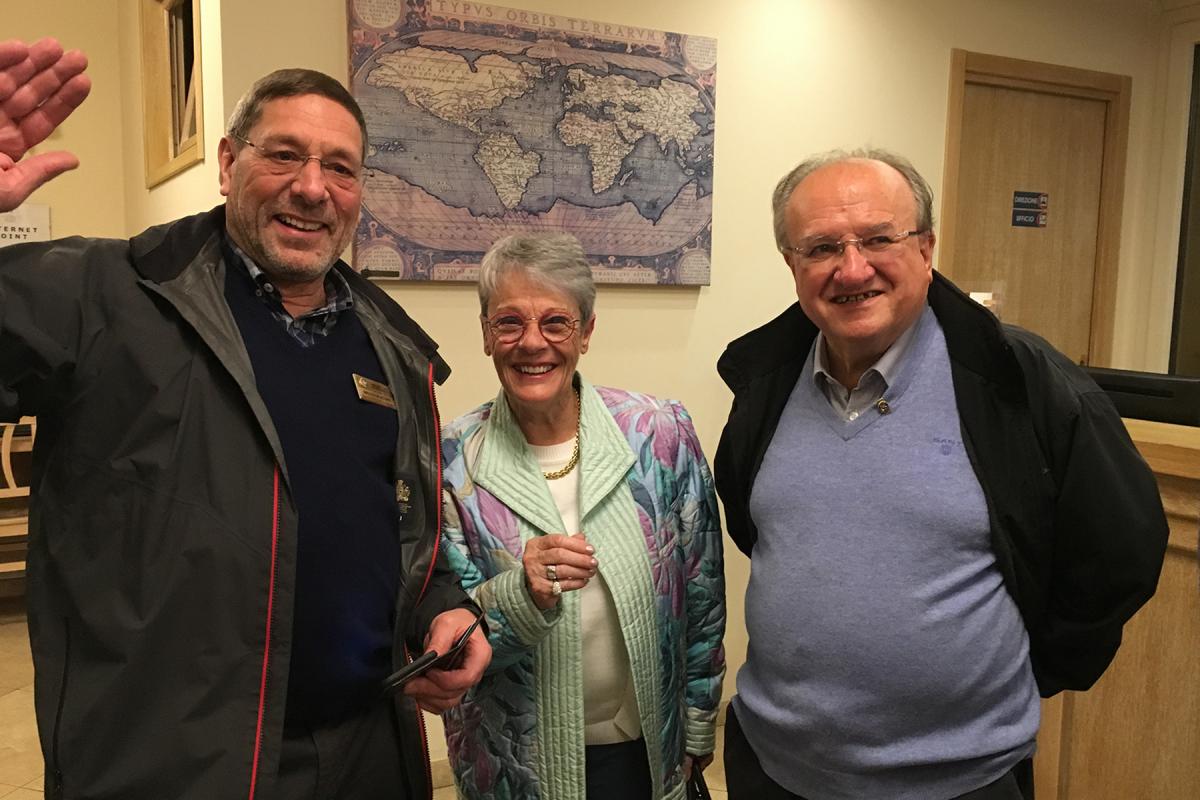 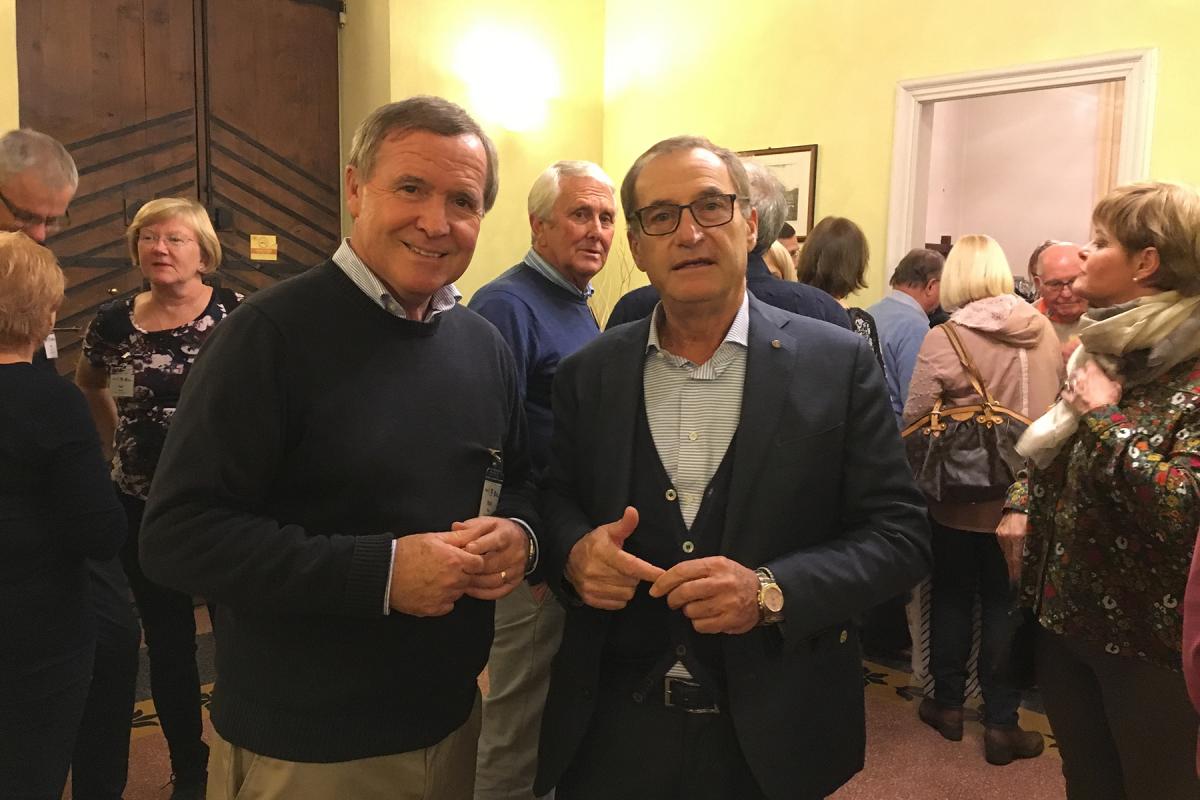 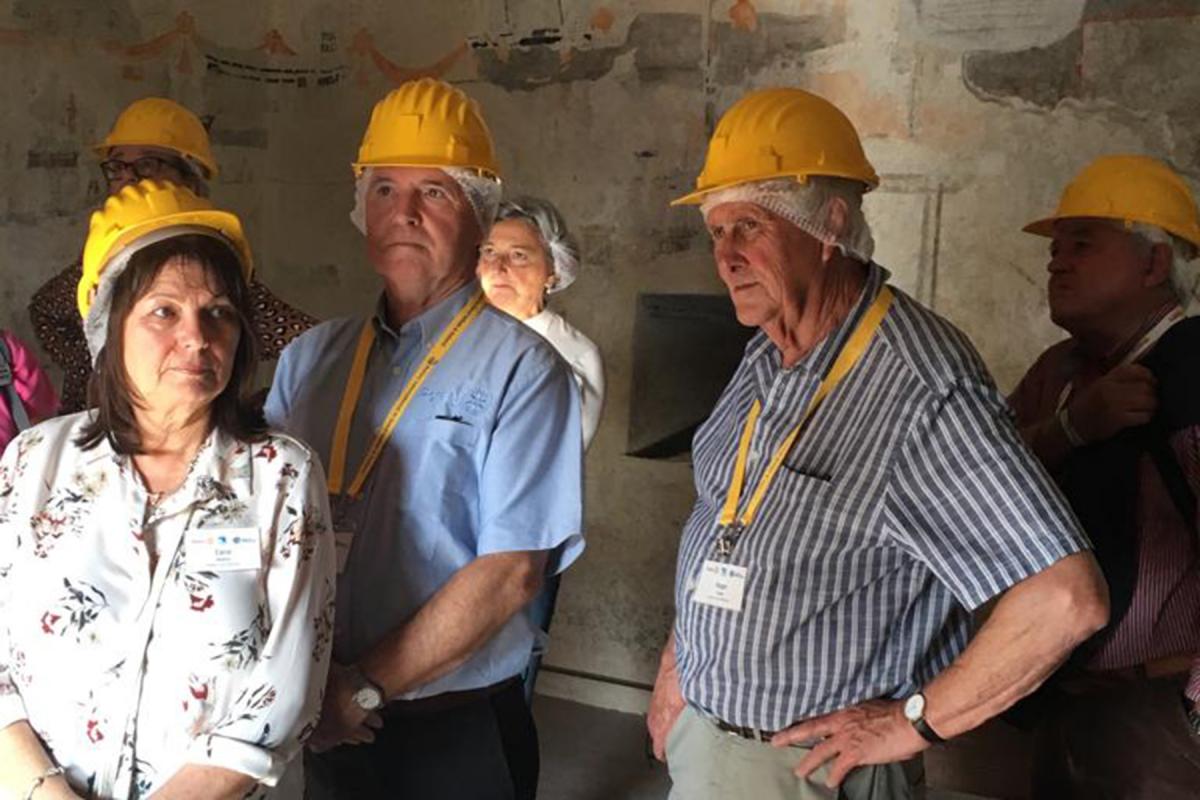 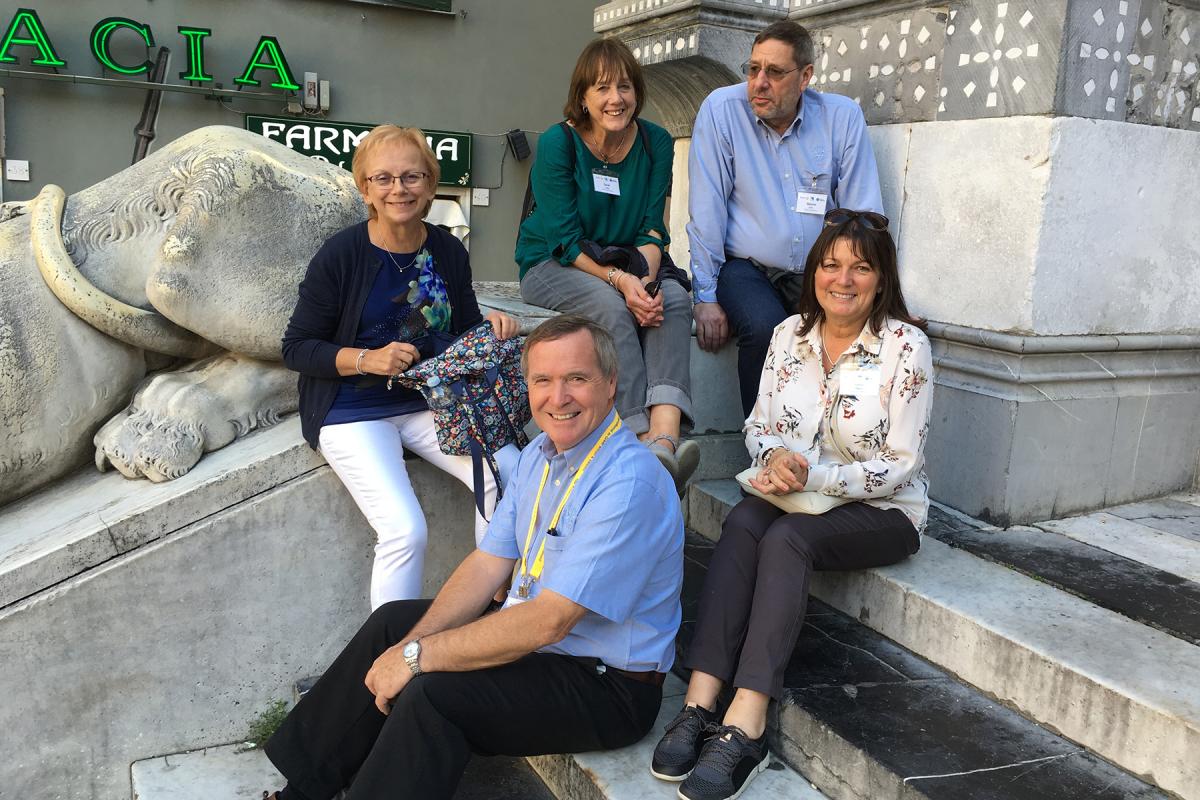 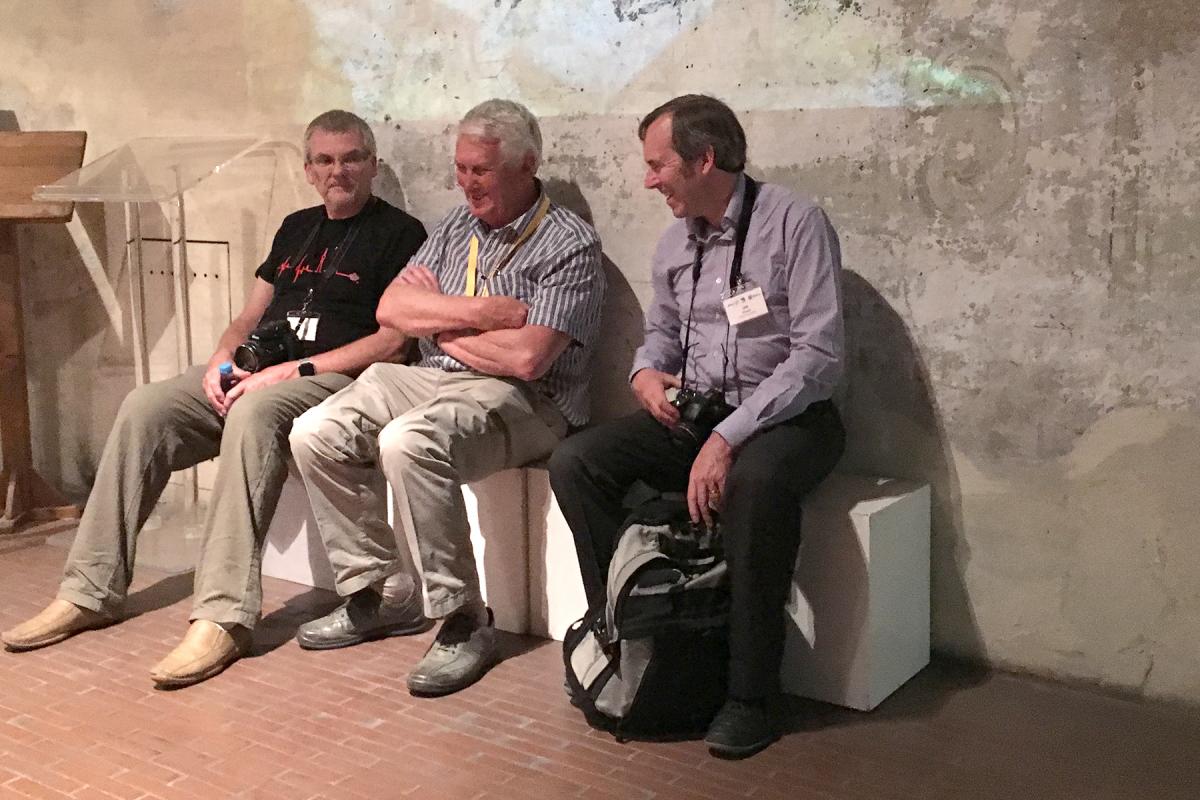 End of a Hard Day 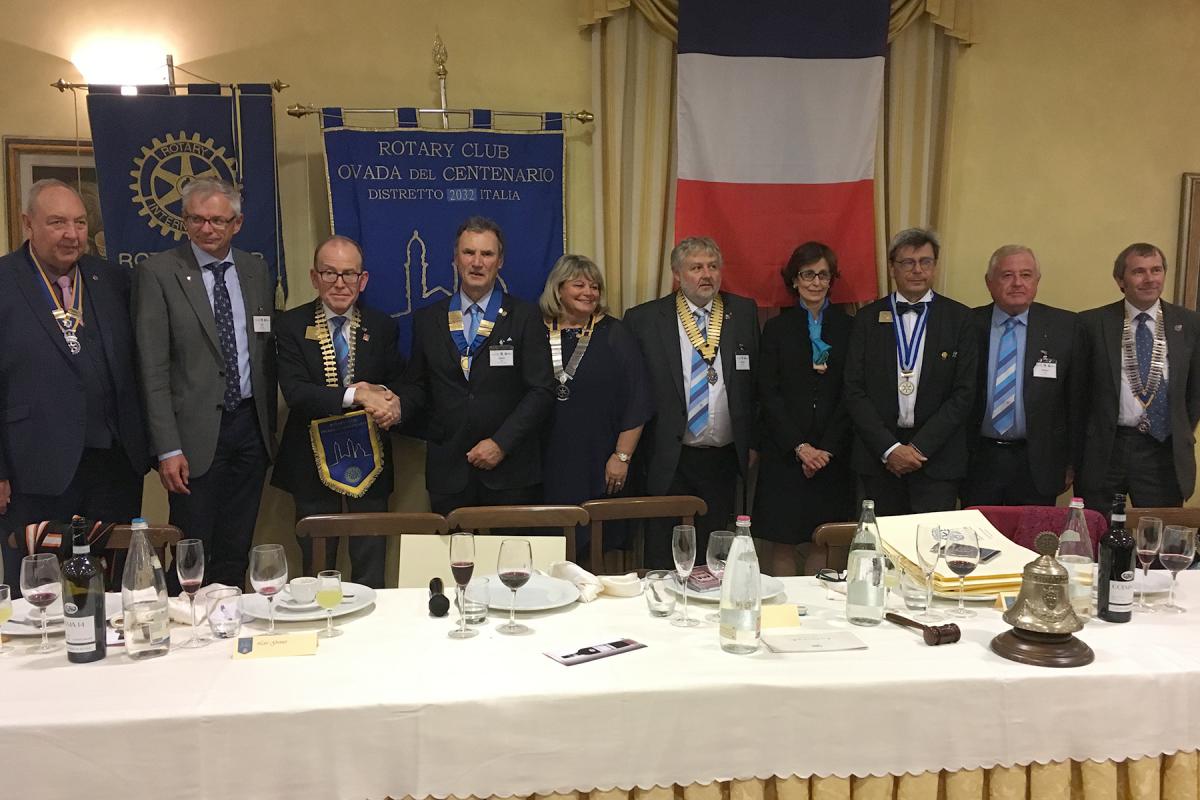 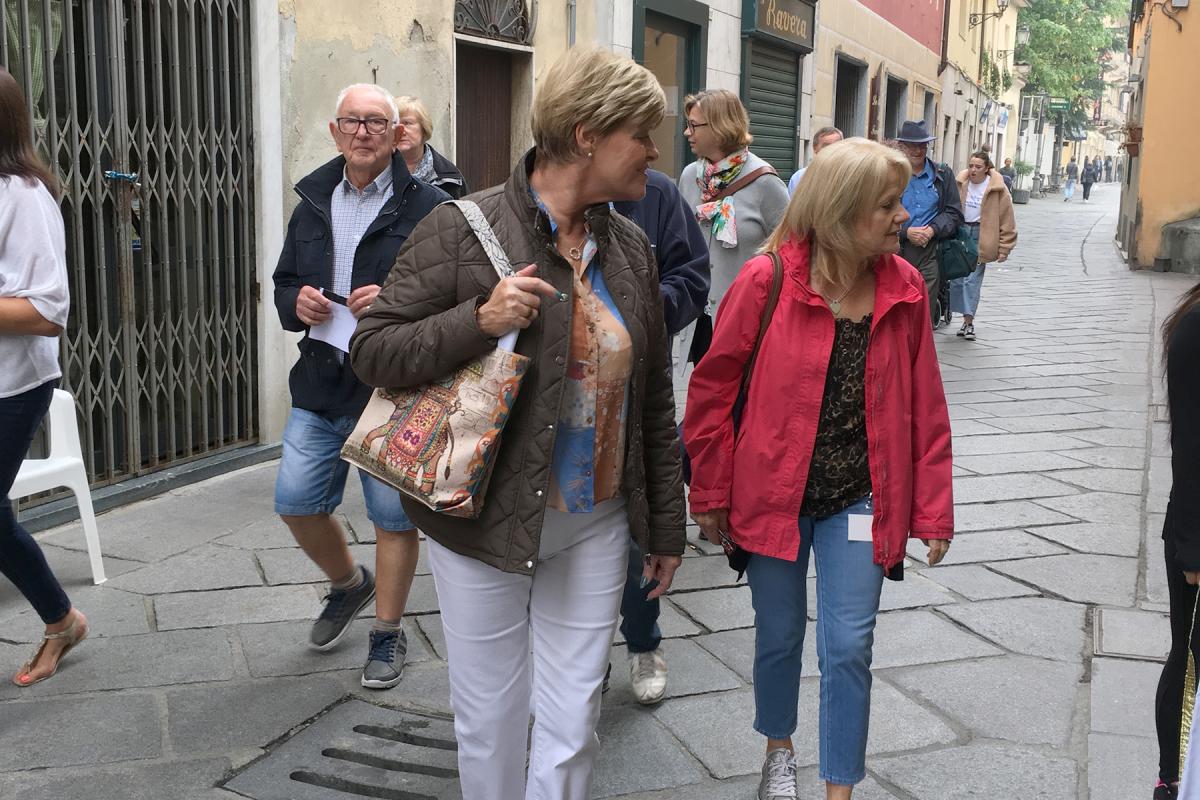 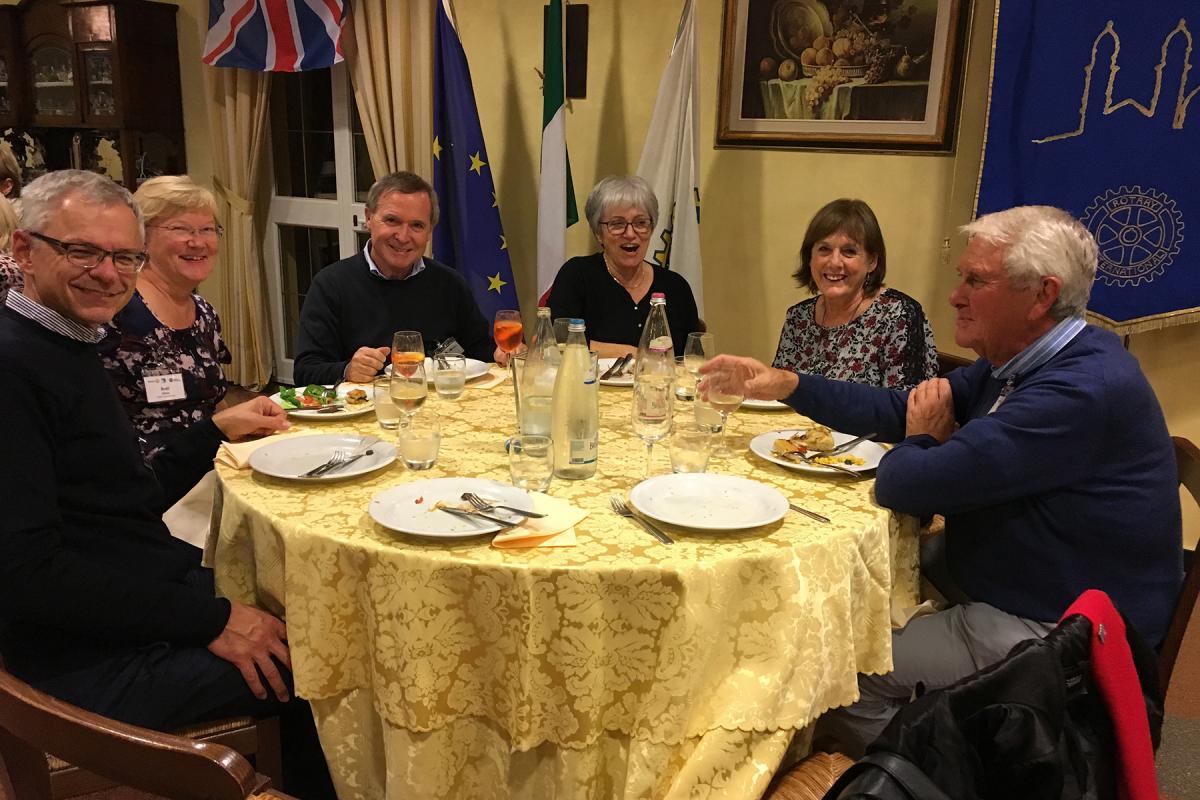 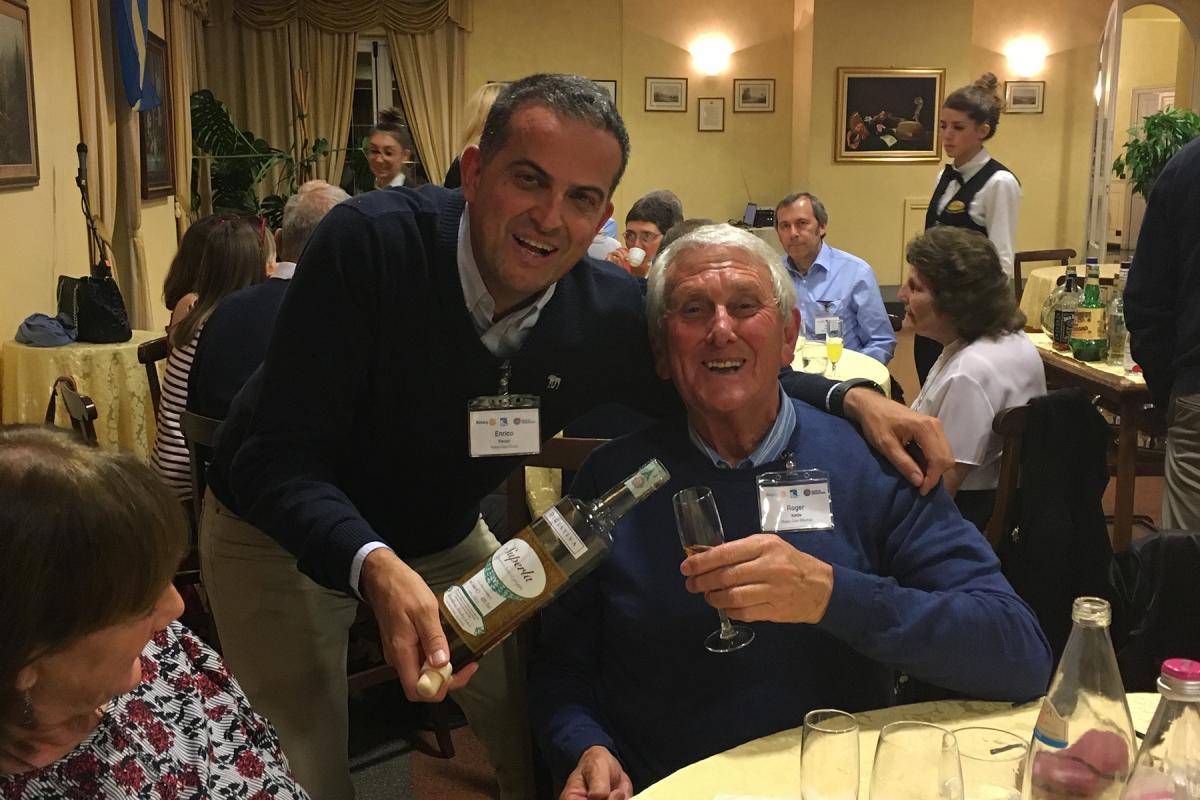 Try this bottle of wine 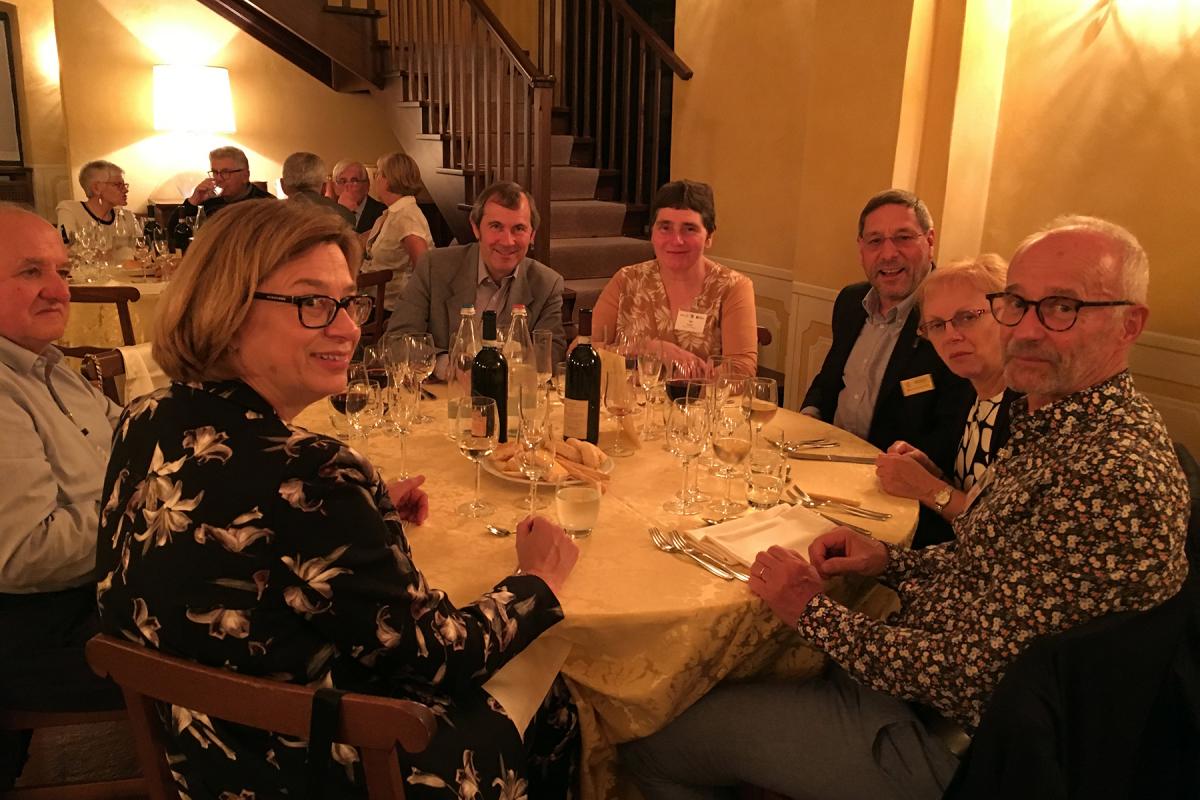 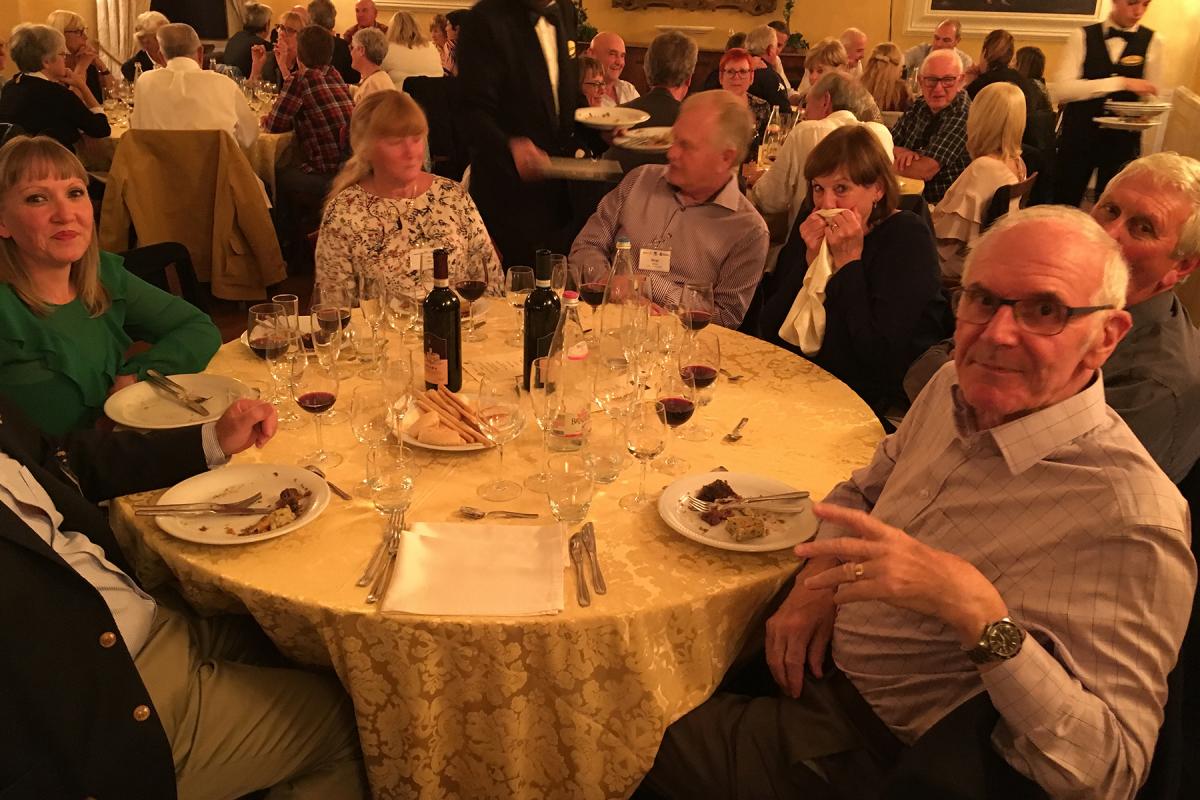 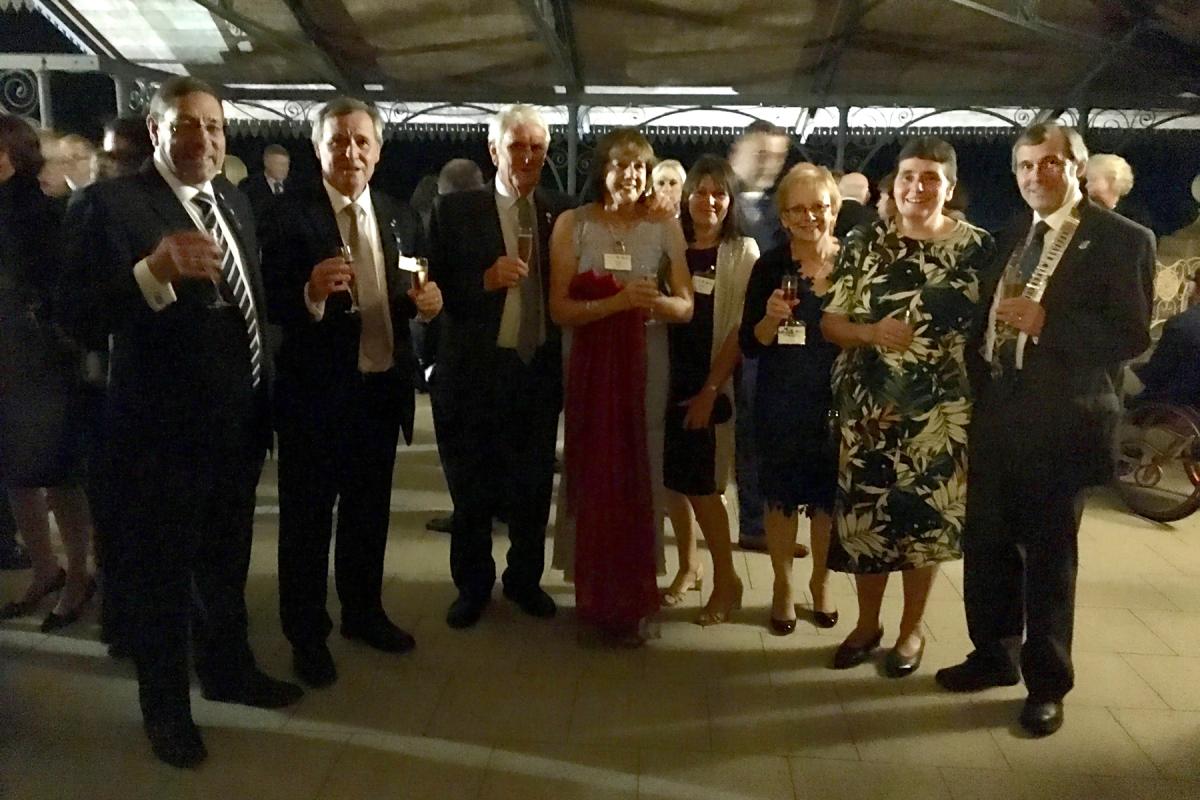 Cocktails on the roof 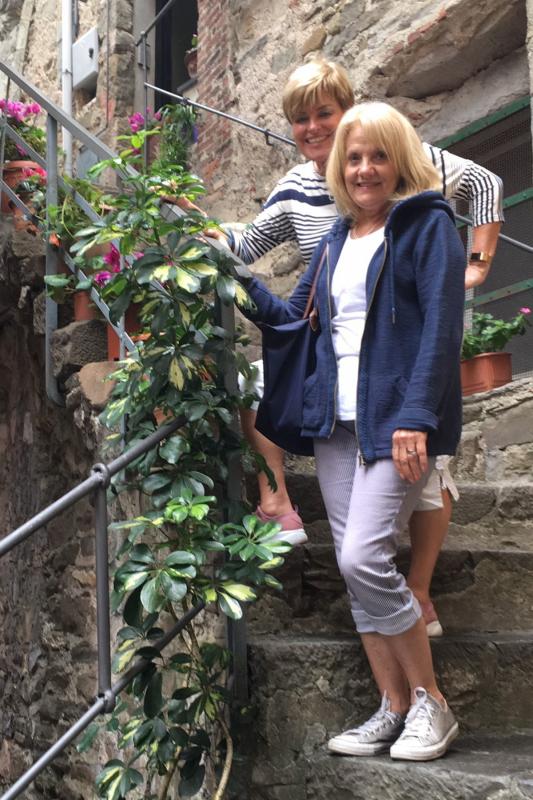 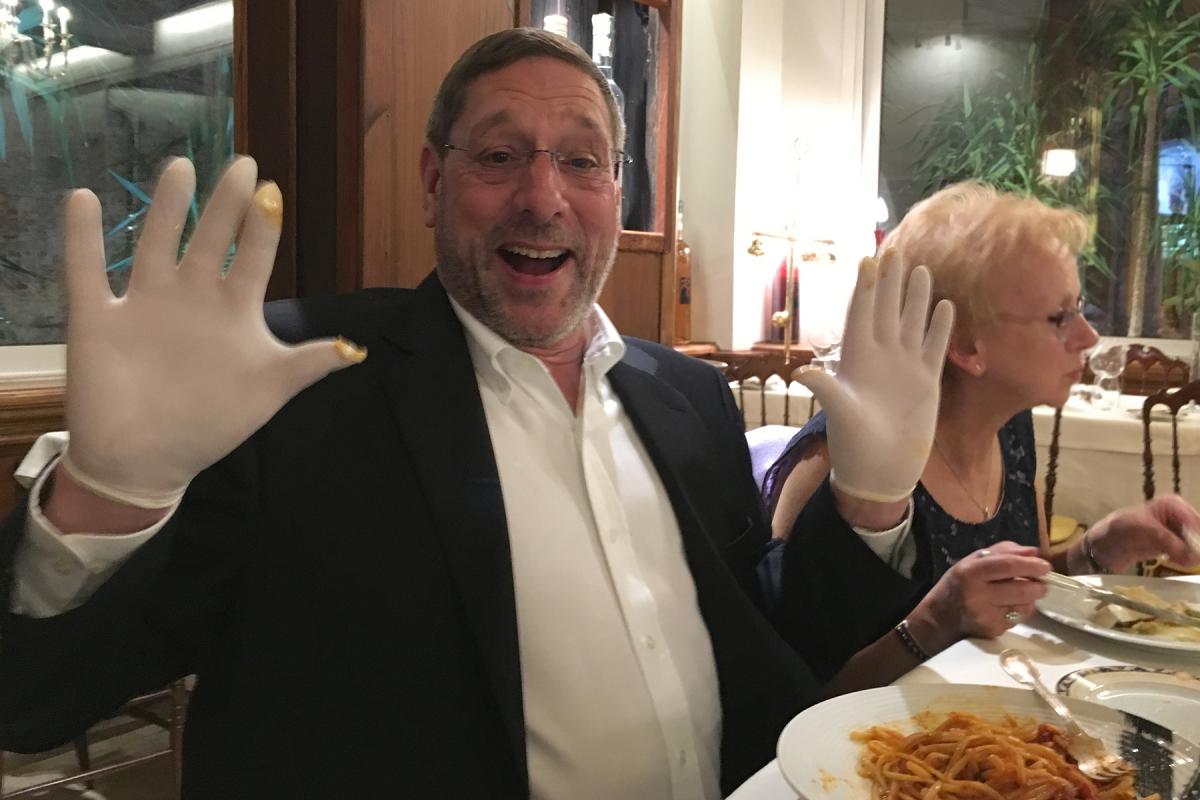 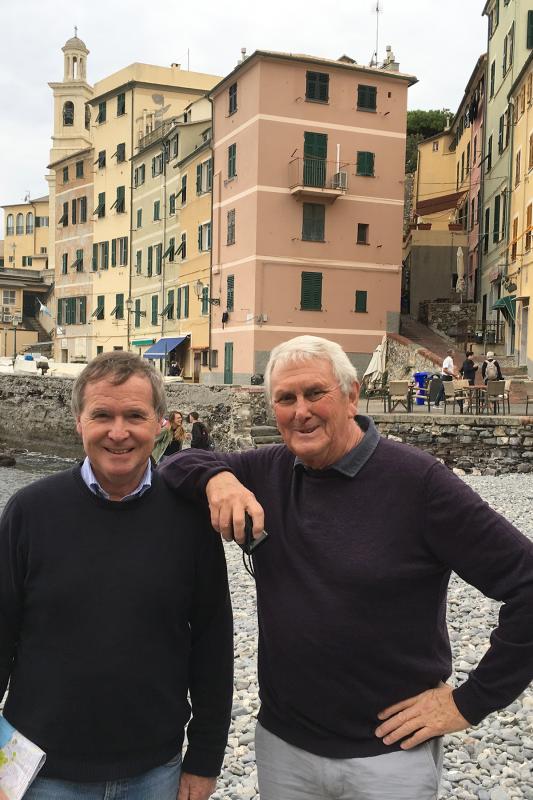 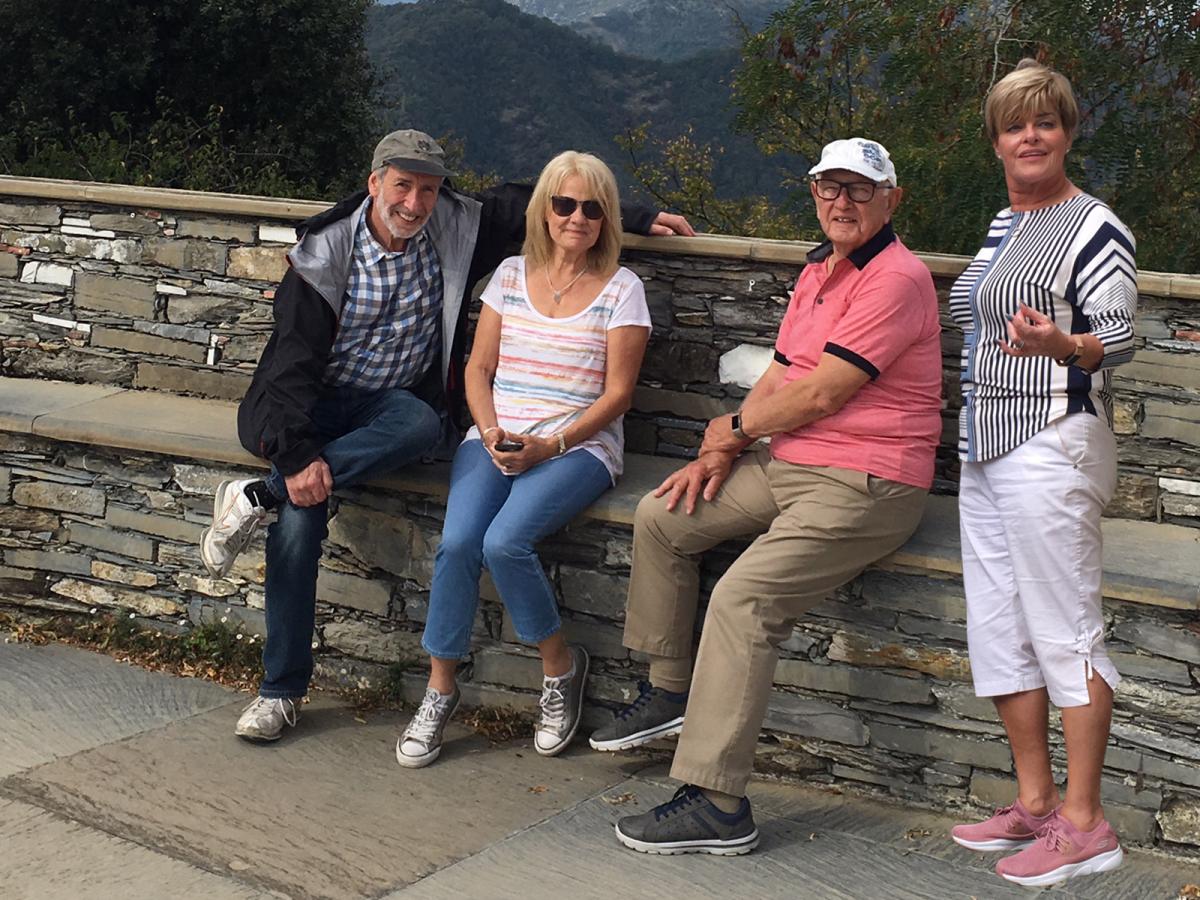 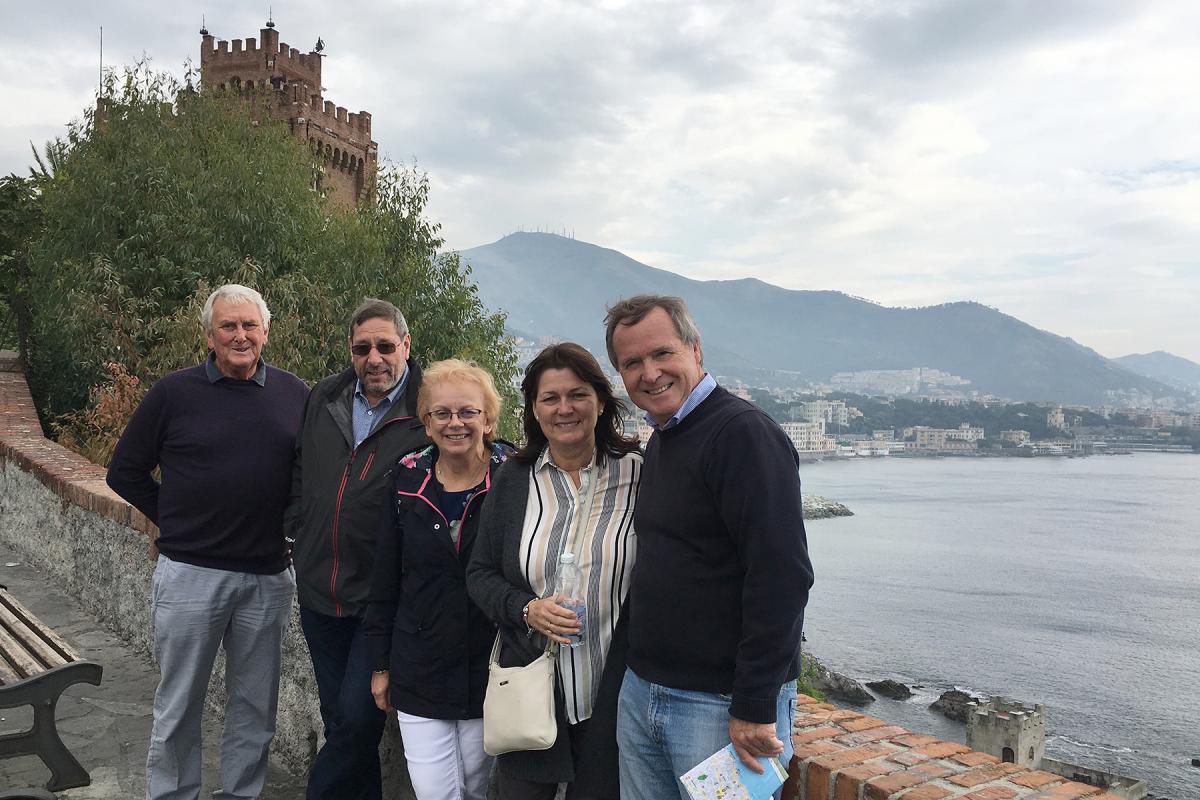 International understanding is a fundamental objective of Rotary and our Rotary Club has linked with the Rotary Club of Basildon with four Rotary Clubs in Europe - Beausoleil (France), Alba (Italy), Ovada (Italy), and Karlshamn (Sweden).  Each year one of the clubs hosts the other clubs for a weekend of friendship, international co-operation and joint endeavour.  This year members of Billericay, Basildon, Beausoleil, Karlshamn and Alba travelled to Ovada in Italy to attend the annual "Double Triangular" reunion.

Nothing like an uneventful flight to get a trip off to a flying start. So it was from Stansted and arrival in Genoa where Enrico Ferrari greeted us and transferred us smoothly to our hotel.  A mine of information – nothing to do with Rotary. Just about the best local wines and where to holiday. .... OK – so it was all about Rotary!

We arrived ahead of everyone else with time to spare before the “meet and greet” opening dinner, so we indulged in a few relaxing drinks. Nothing new there, then !

Back at the hotel, our friends from Karlshamn, Sweden and Beausoleil, France, had arrived. Initial greetings,  then transfer shuttles to the splendid Villa Bottaro, meeting place of the Ovada Club, for an excellent buffet.  It helped that the owner and chef were Ovada members!  Then time for a get-to-know-you circulation, speech of welcome from President Giovanni Gatti and bed for an early start on Friday.

A buffet-style breakfast helped to break the ice between French, Swedish and British over shared tables.

Then sightseeing: First to Santa Croce in Bosco Marengo - a religious complex dating from 1566, built to elevate the standing of Pope Pius V's home town of Bosco Marengo, all reflected by our English and French speaking guide. Next door, the monastery and its “the cloister of death” where  deceased monks were buried under the walkway.  But, of course, cue for a joke from Patrick – “Heard the one about the monks who had sworn a vow of silence and were only allowed to speak every 10 years.... "

Next stop Acqui Terme, a spa town with a natural hot spring dispensing high mineral content hot water. Where art thou, Water Aid?  And then the medieval castle at Cremolino.  The private owners of the castle showed us round, explaining  the refurbishments they had made over the 20 plus years they had owned it, including  anecdotes from their celebrity lifestyle.

Twilight when we returned, then, freshen up and off again to another castle,  Tagliolo’s, for dinner and a special wine, Dolcetto D’Ovada, produced at the castle.  Plentiful supply, accompanied by much hilarity and many photos of us and our friends.

Then emotional farewells – only to meet up again on the coach which took us back to the hotel.  Final memory – that homeward journey and some very loud singing by our French friends. Vive La France! A day of fun and fellowship –  thanks to our wonderful hosts.

A Bridge Of Sighs And Historical Splendours (Saturday, October 13)

Light breakfast at the Hotel with an eye on the waistline .... international visits to Italy are renowned to be rich in nutrition and pasta!  Leaving early to visit Genoa, we were mindful of the Morandi bridge having collapsed only two months ago. We were relieved not to be driving as we skirted around and across the port area selecting a multitude of tunnels and spaghetti type junctions to arrive at the new part of the port where we enjoyed some free time for coffee and marvel at the magnificent yachts and cruise liners (as big as apartment blocks) lining the marina.

Our friends from Ovada expertly guided us around the many historical buildings and museums before lunch at the Bristol Hotel, where we dined finely in true Italian style.

On to the Palace de Ducal, started in 1298, and completed around 1539 at a time when Genoa was the richest city in the world as a result of astute bankers lending money to other countries at exorbitant interest rates, and claiming their land when they defaulted on loans.

Climax to the day - the magnificent Gala Dinner in Villa Bottaro. Aperitifs of pink champagne and a selection of cold starters on the rooftop terrace and mingling with our Rotarian friends from the six international clubs, in a most relaxed setting.
More indulgence in the banqueting suite, fine food and wine from the Region (Dolcetto di Ovada and Gavi) after some compelling speeches from the Presidents to open proceedings. Our own President Les performed well on the International Stage alongside the District Governor and the other Presidents from Basildon, Beausoleil,  Alba and Karlshamm. President Giovanni Gatti from Ovada concluded the speeches amidst great applause  (probably so we could then commence the festivities and enjoy the liquid refreshment!!)

What a meal! Slow cooked pork fillet followed by a rich desert of hazelnut roulade accompanied by copious amounts of wine, all served to perfection by the superb staff. Traditional espresso coffee (which we came to enjoy) completed the indulgence. Back to our hotel by coach, fully relaxed if a tad weary. Enjoyable day in more than one respect!!

On our final morning there was a joint meeting of the Presidents to consider a proposal from Beausoleil for a "1000 straw" Global project.  Beausoleil President Rosalind engineered the whole project and had prepared us all well, so much so that the presentation was conducted in four languages, verbally and written, a great effort.
Concise meeting, good fellowship and coffee – and exquisite cakes!

Everyone else was taken to Ovada to walk around the town, meeting up for coffee in the town square only to be surprised and entertained by a man and two performing dogs (You don’t get that in Basildon town centre!)

Lunch and, only too soon, time for farewells before our departure.