The Bailiwick is blooming #Purple4Polio 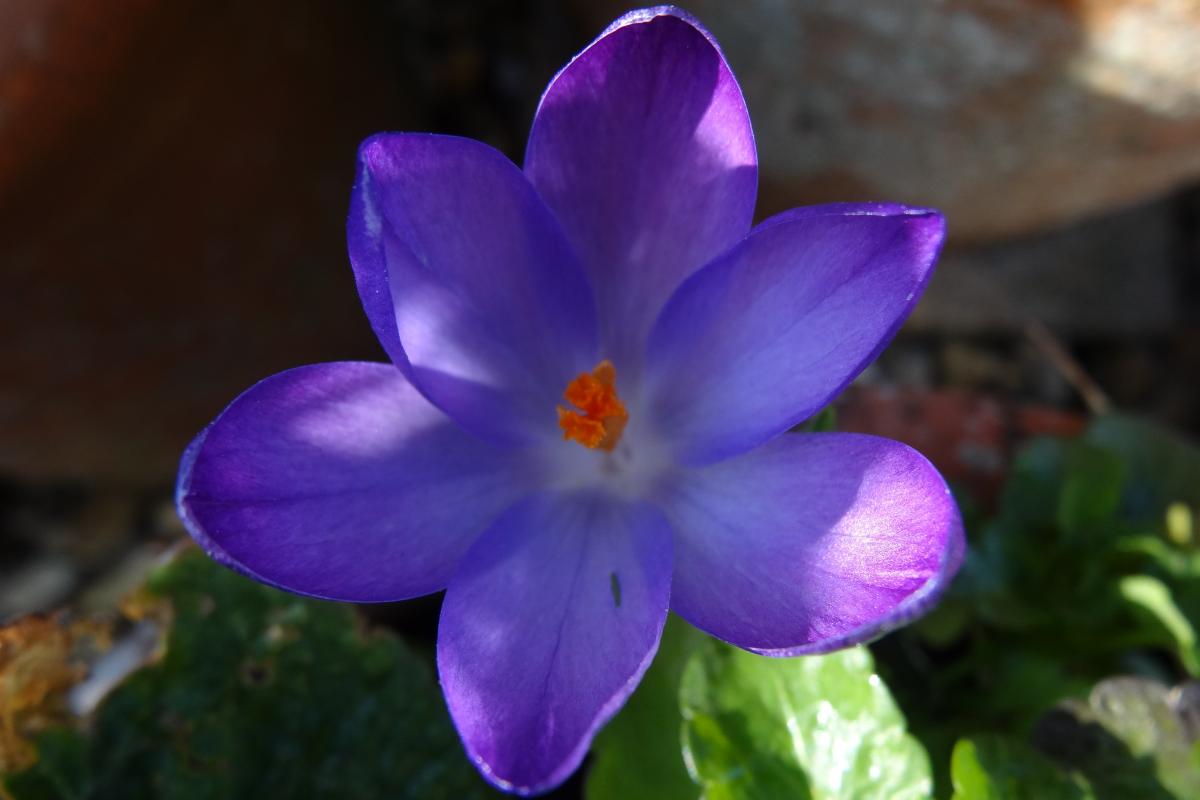 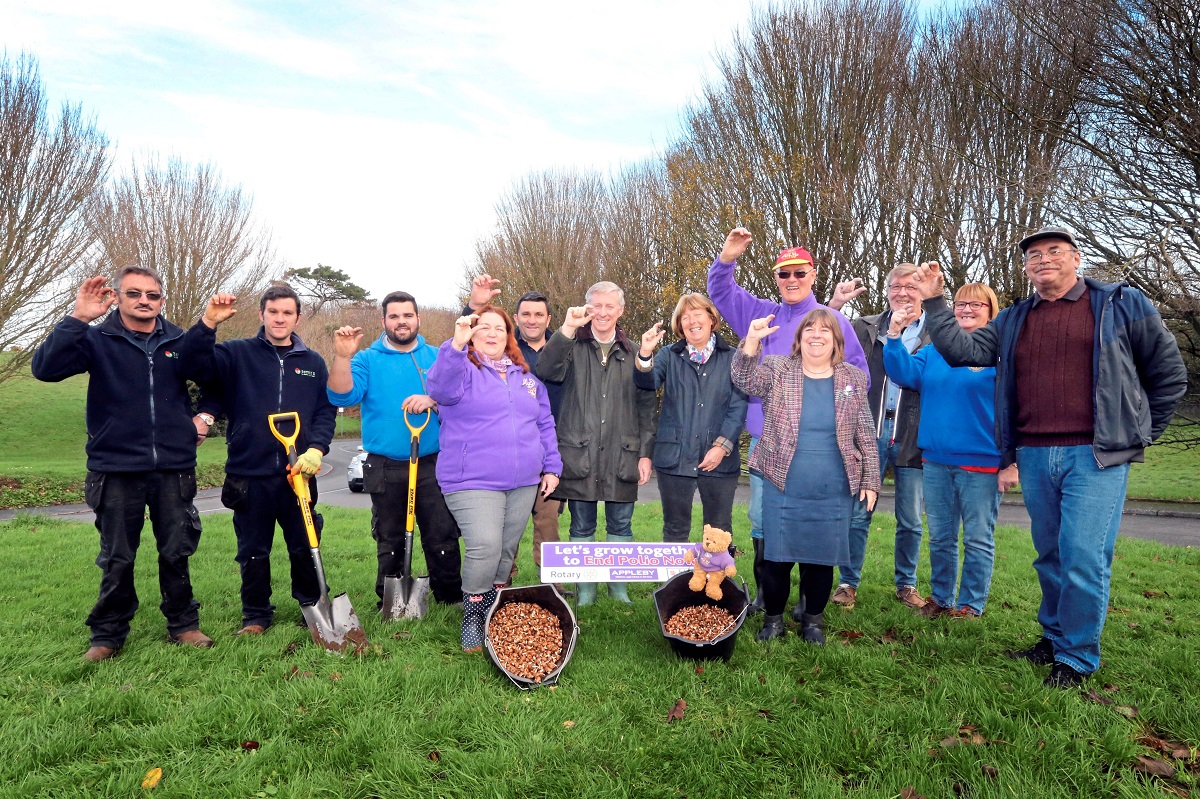 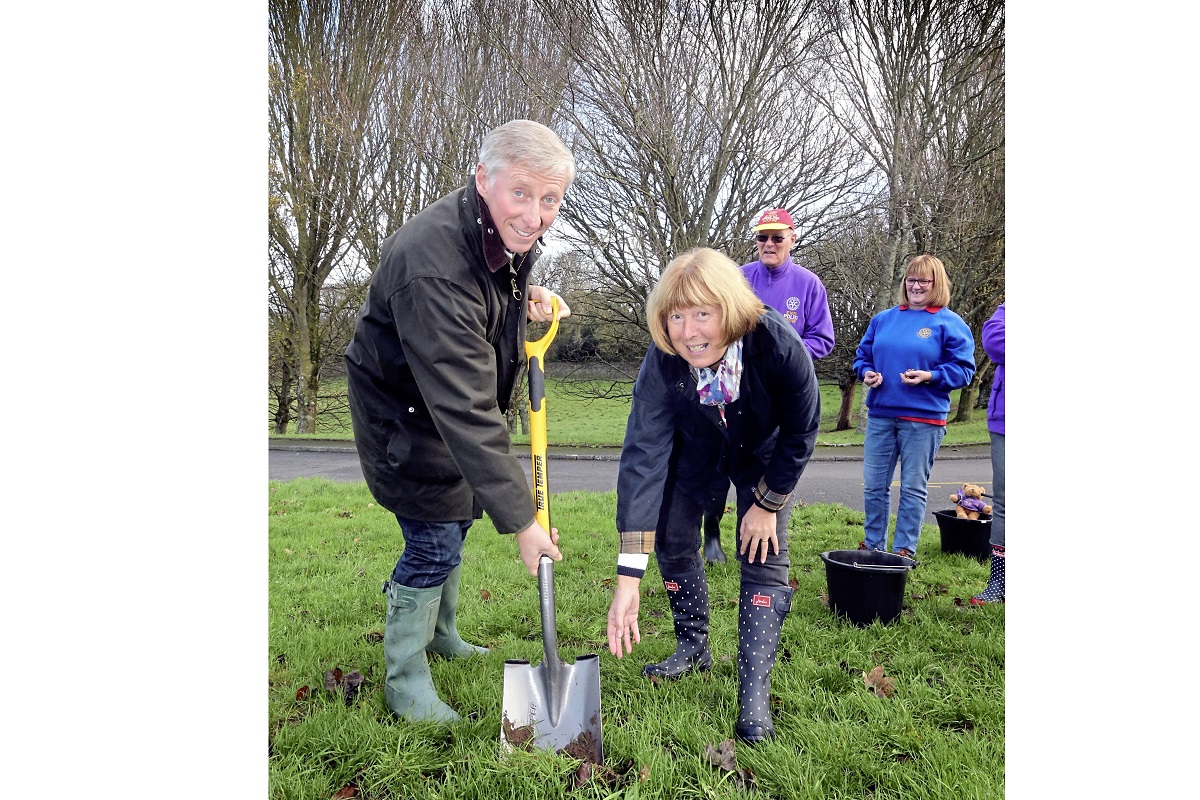 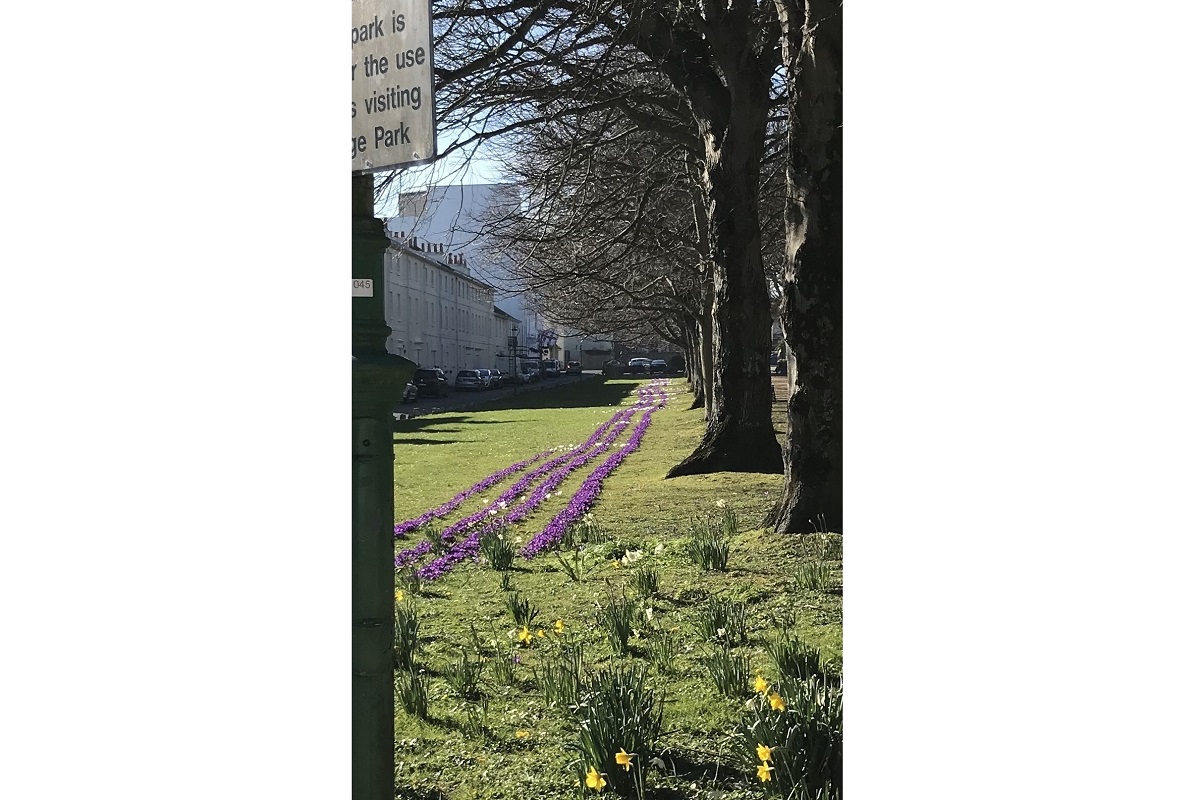 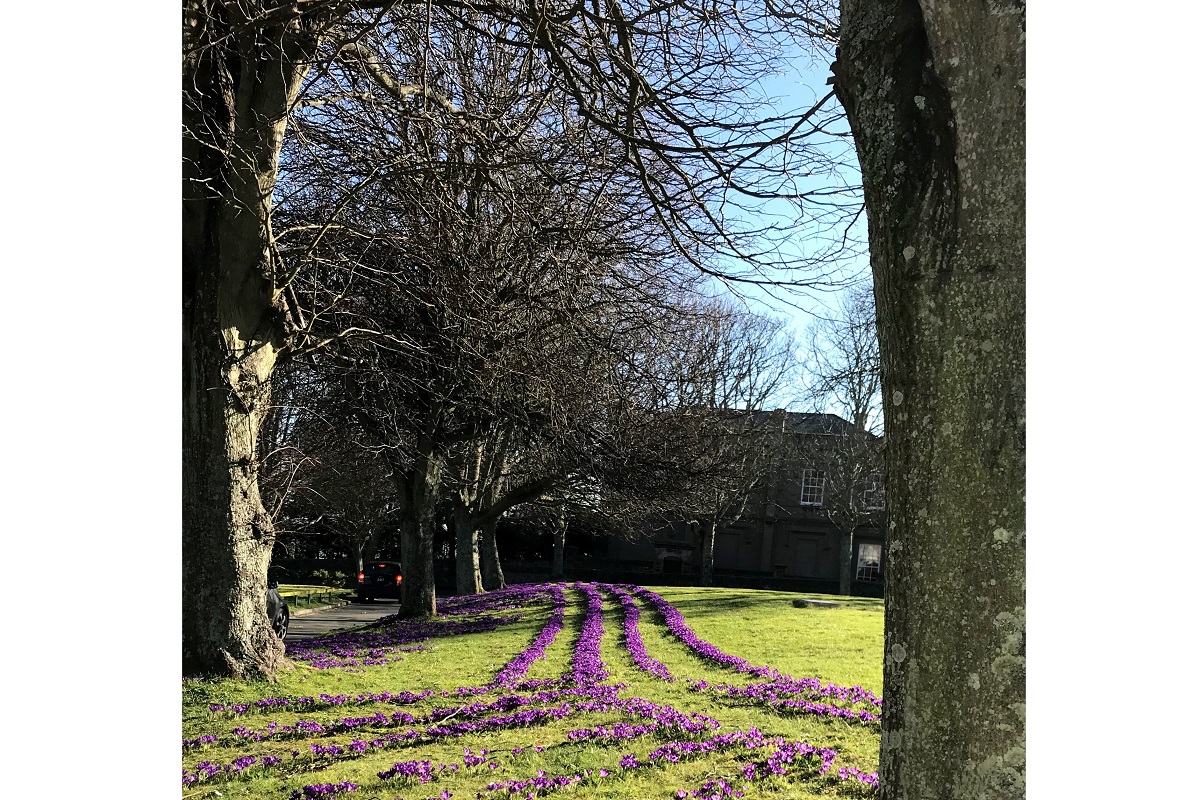 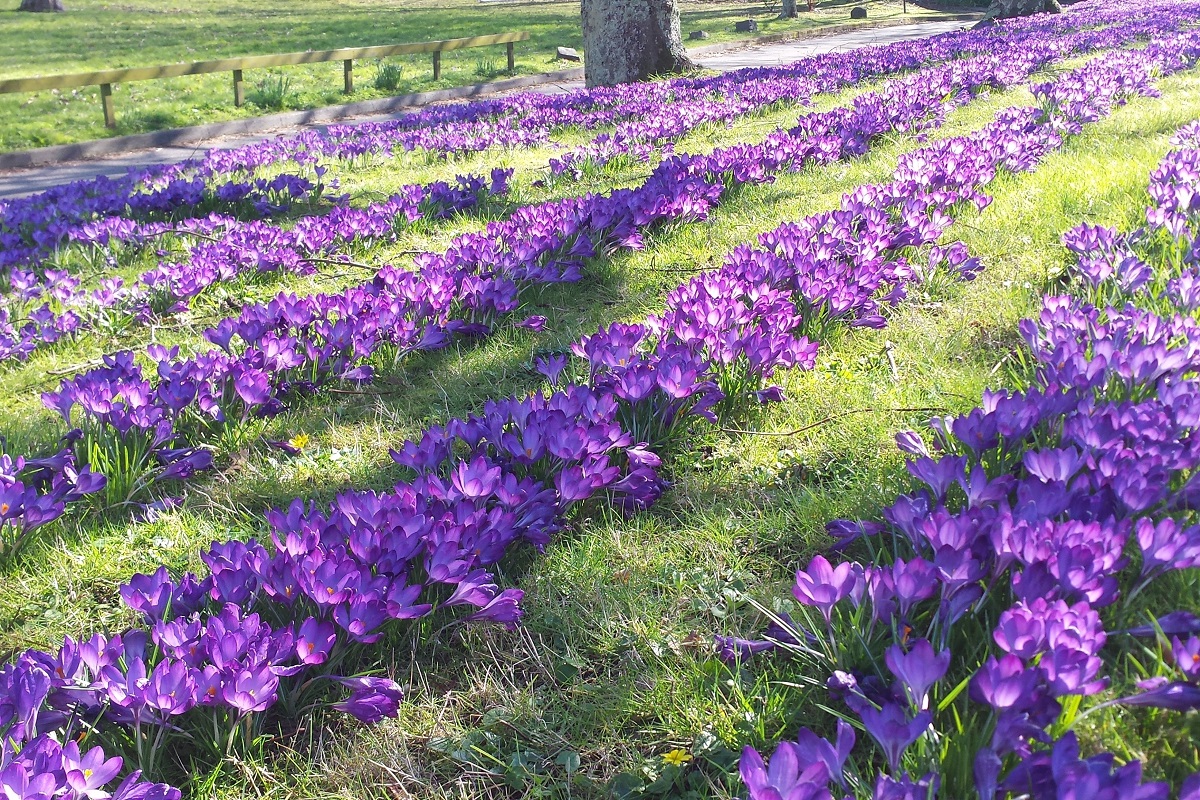 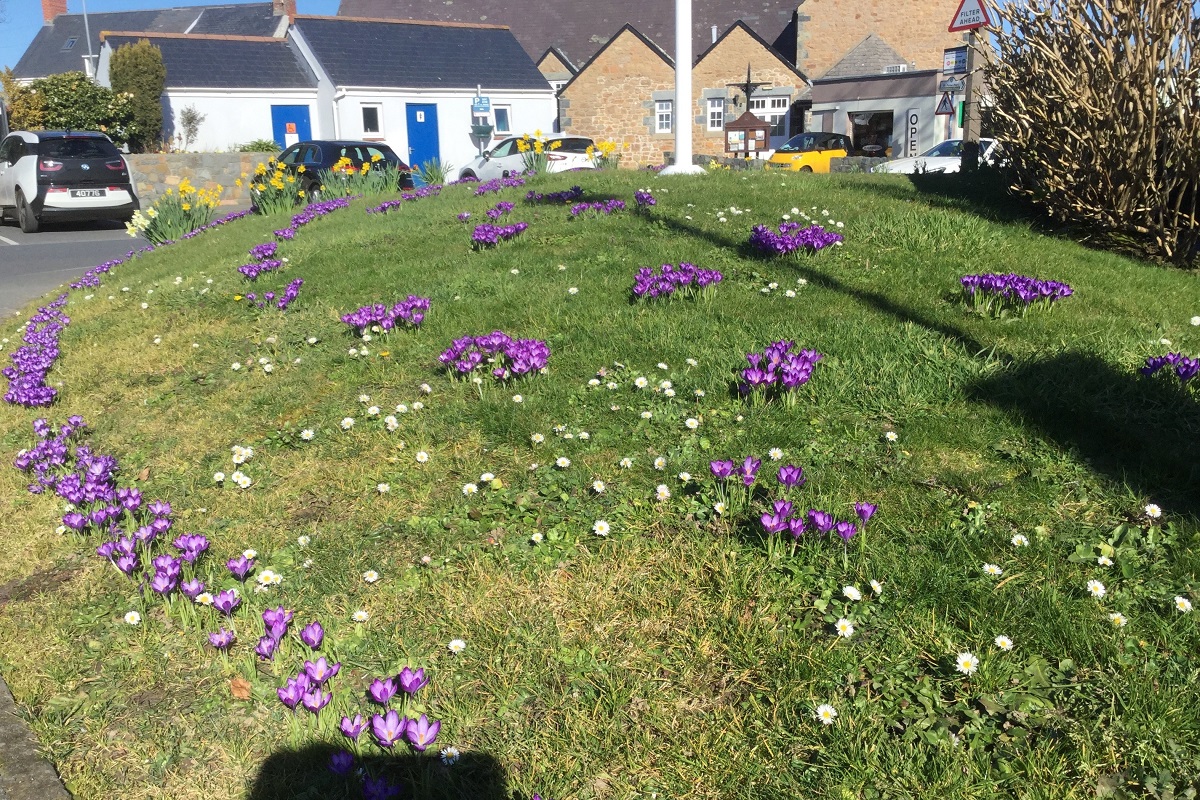 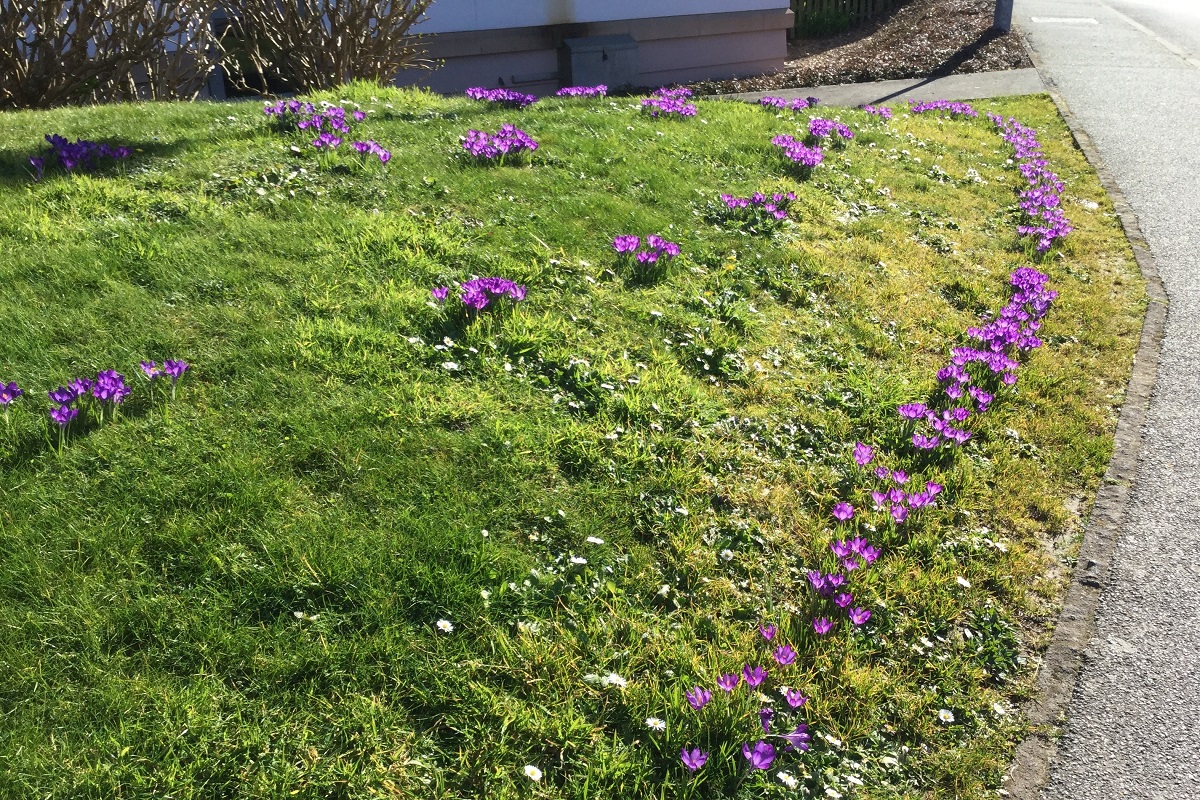 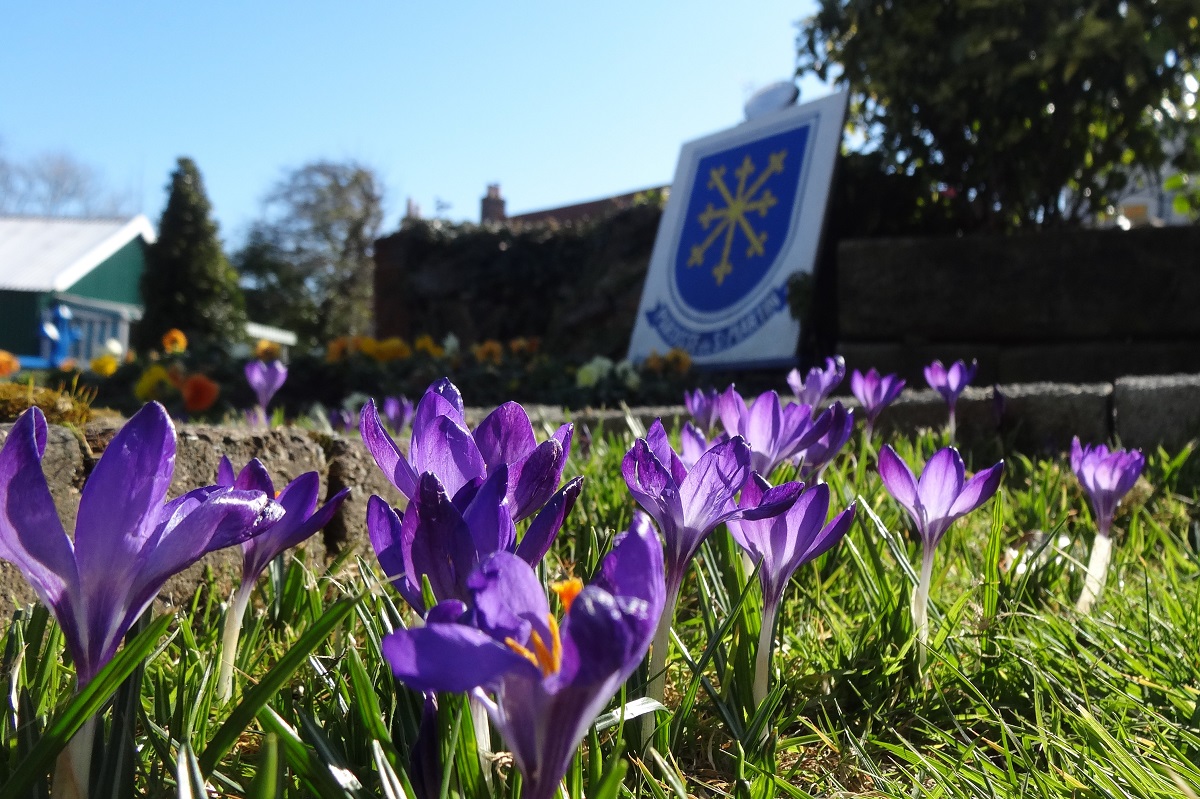 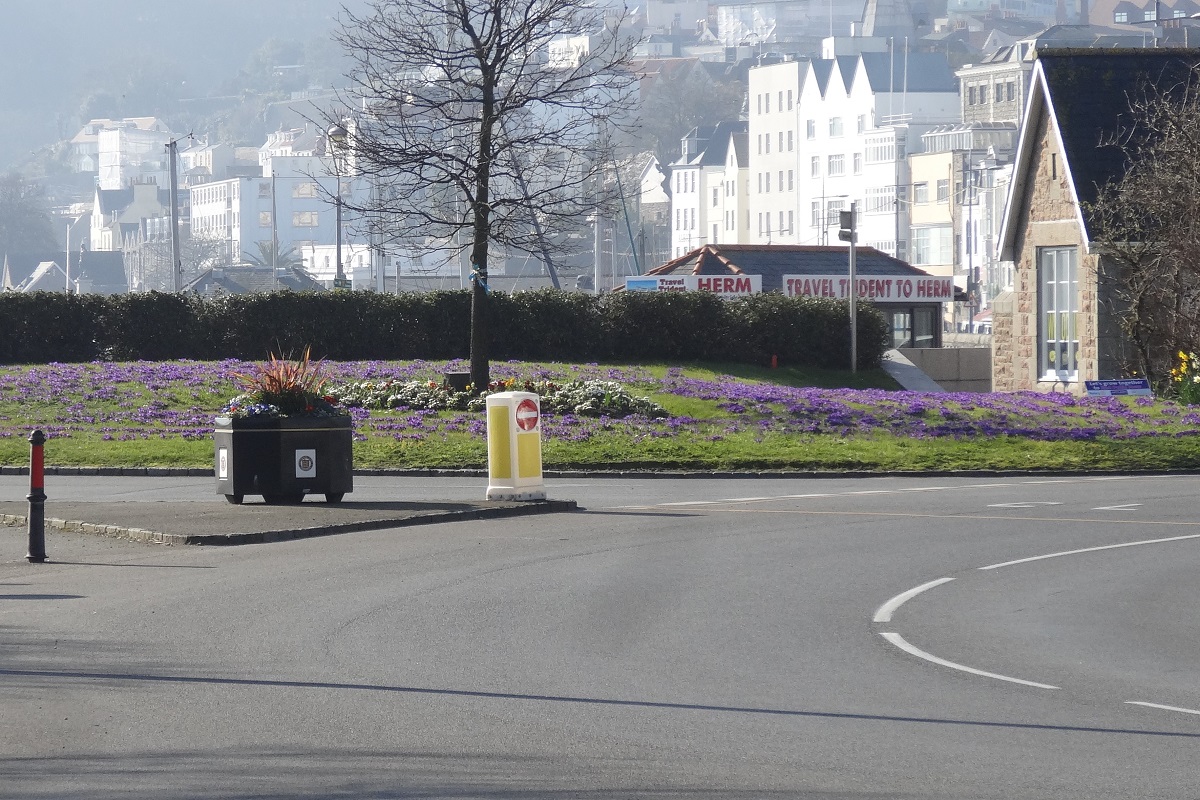 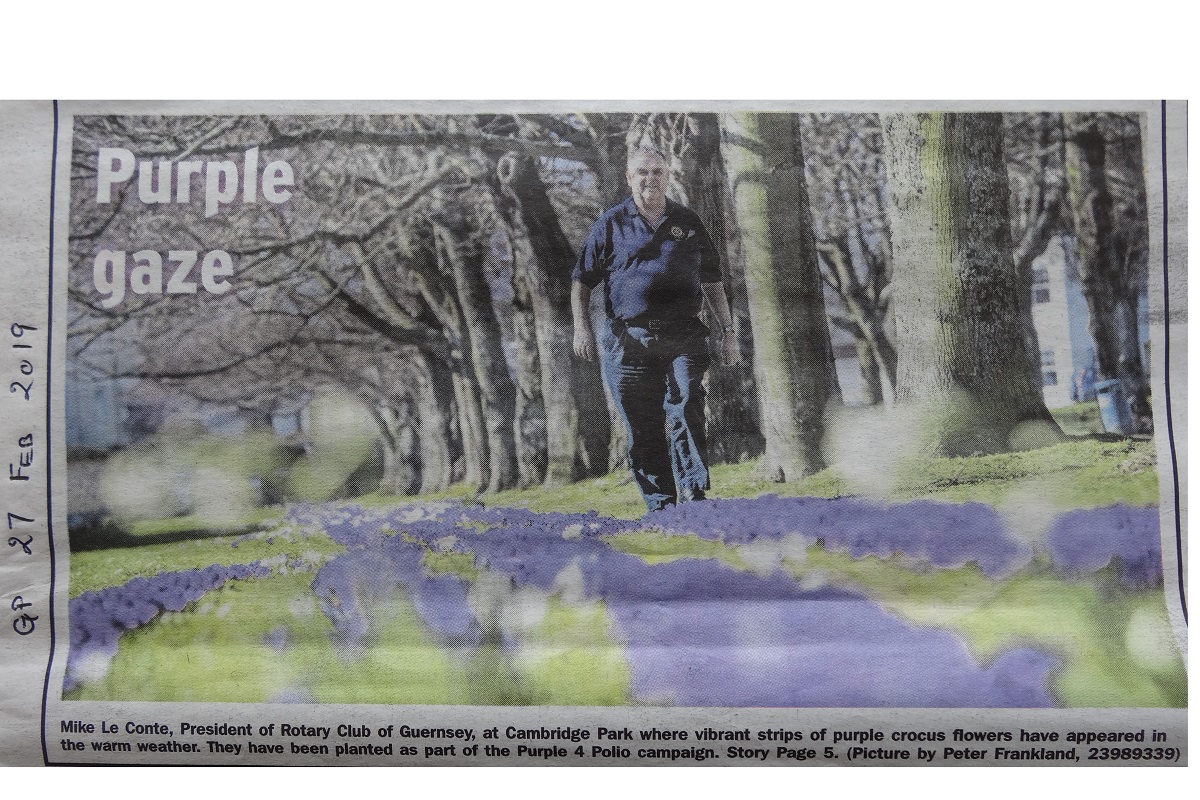 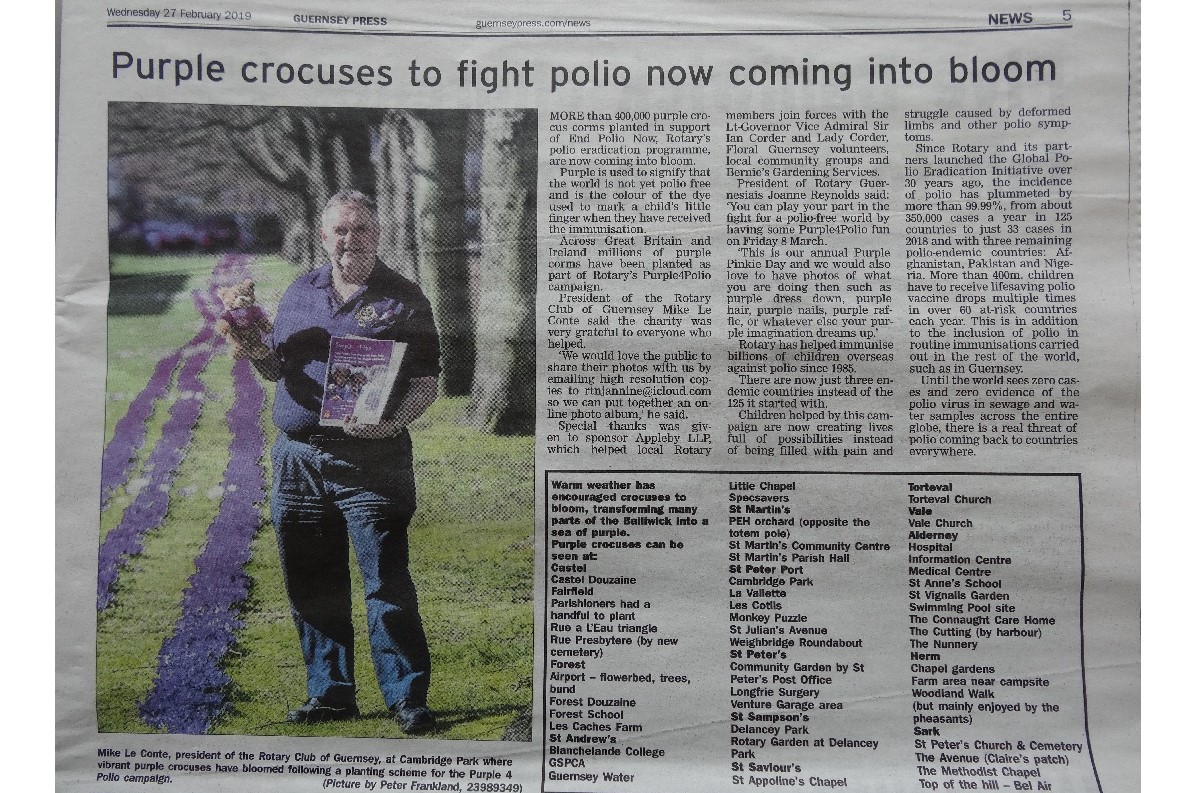 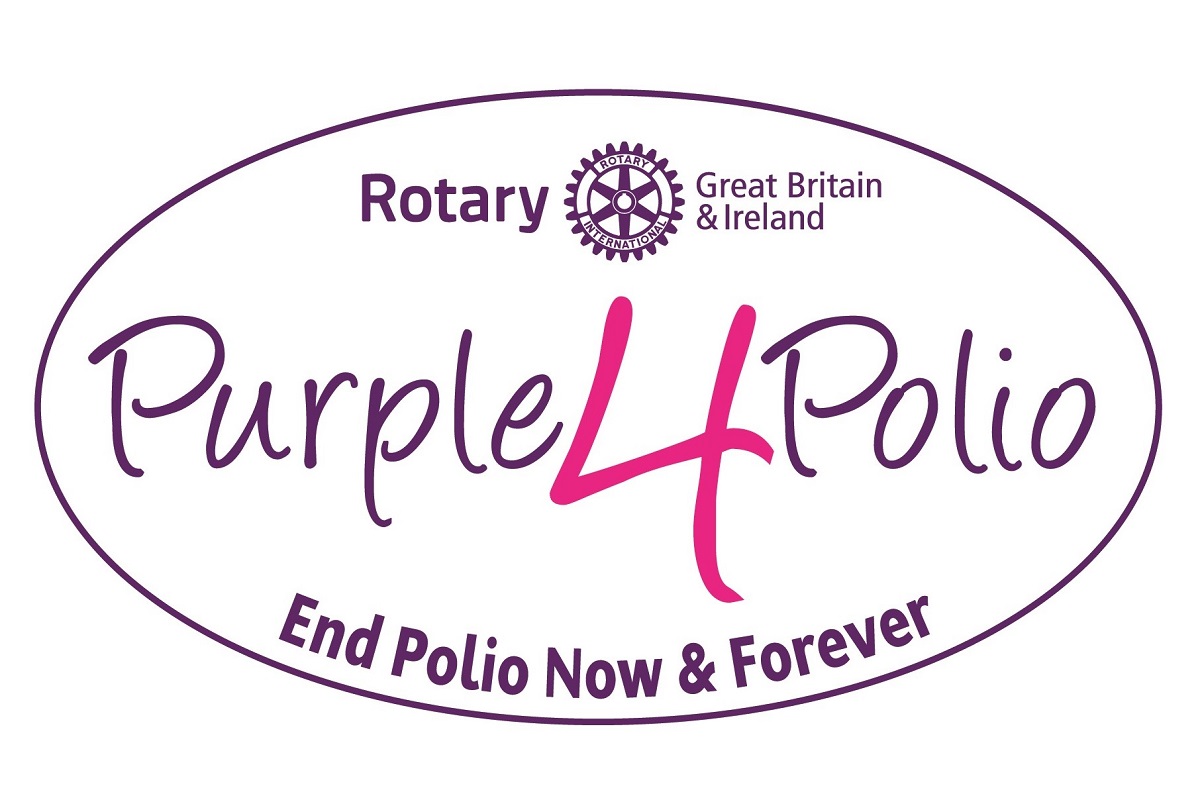 The islands are a vision of purple with crocuses in bloom, reminding us all that the world is not yet Polio free.  With thanks to sponsors Appleby (Guernsey) LLP in recent years, local Rotary members have joined with His Excellency the Lieutenant Governor & Lady Corder,  Floral Guernsey volunteers,  local community groups and Bernie's Gardening Services to plant over 400,000 purple crocus corms in support of End Polio Now, Rotary’s polio eradication programme.

The Bailiwick is just one of the areas awash with purple as millions of corms have been planted across Great Britain and Ireland as part of Rotary’s Purple4Polio campaign.

The warm and sunny weather has woken the crocuses from their winter snooze, encouraging them to transform many parts of our islands into a sea of vibrant purple.  Please click HERE for a full list of where you can find purple crocus in bloom.

Mike Le Conte, President of Rotary Club of Guernsey said: “We are very grateful to everyone who helped plant the crocuses.  We would love the public to share their photos with us by emailing high resolution copies to rtnjannine@icloud.com so we can put together an online photo album".

Purple is a symbolic colour as it is the dye used to mark a child’s little finger when they have received the immunisation.

Joanne Reynolds, President of Rotary Guernesiais said "You can play your part in the fight for a polio free world by having some Purple4Polio fun on Friday 8th March.  This is our annual Purple Pinkie Day [see attached] and we would also love to have photos of what you are doing then such as Purple dress down, Purple hair, Purple nails, Purple raffle or anything else you can imagine."

Rotary has helped immunise billions of children overseas against polio since 1985 and now there are just three endemic countries instead of 125 countries.

Thanks to Rotary, and the support of our partners WHO, CDC, UNICEF and the Bill and Melinda Gates Foundation, those children are creating lives full of possibilities instead of living lives filled with pain and struggle caused by deformed limbs and other polio symptoms.

Since Rotary and its partners launched the Global Polio Eradication Initiative (GPEI) over 30 years ago, the incidence of polio has plummeted by more than 99.99%, from about 350,000 cases a year in 125 countries to just 33 cases in 2018 and with three remaining polio-endemic countries: Afghanistan; Pakistan; and Nigeria.  More than 400 million children have to receive lifesaving polio vaccine drops multiple times in over 60 at risk countries each year.  This is in addition to the inclusion of polio in routine immunisations carried out in the rest of the world like here in Guernsey.

Whilst tremendous progress has been made, the final steps on any journey are often some of the hardest, with these last few years providing many obstacles which we have to overcome to make eradication happen.  Until the world sees zero cases and zero evidence of the polio virus in sewage and water samples across the entire globe there is a real threat of polio coming back to countries everywhere.

Extensive global environmental sampling around the world has made highlighting and mobilising against threats to eradication easier, more targeted and often more effective.

This reemphasises the challenges facing the world in ensuring that polio becomes just the second human disease ever to be eradicated.

The end is very much in sight and Rotary has committed to raising US50 million towards the global polio eradication efforts every year.  This is then trebled by the Gates Foundation to $150 million with about $1 billion needed each year till the world is declared polio free.

The Bill & Melinda Gates Foundation match Rotary’s commitment 2:1 so every £1 becomes raised £3. Without full funding and political commitment, this paralysing disease could return to previously polio-free countries, putting children everywhere at risk, including the UK.  Rotary has contributed more than US$1.9 billion to ending polio since 1985.