We host representatives of the club’s chosen soapbox derby charities as guests of the club to receive their donations from the Soapbox Derby income. 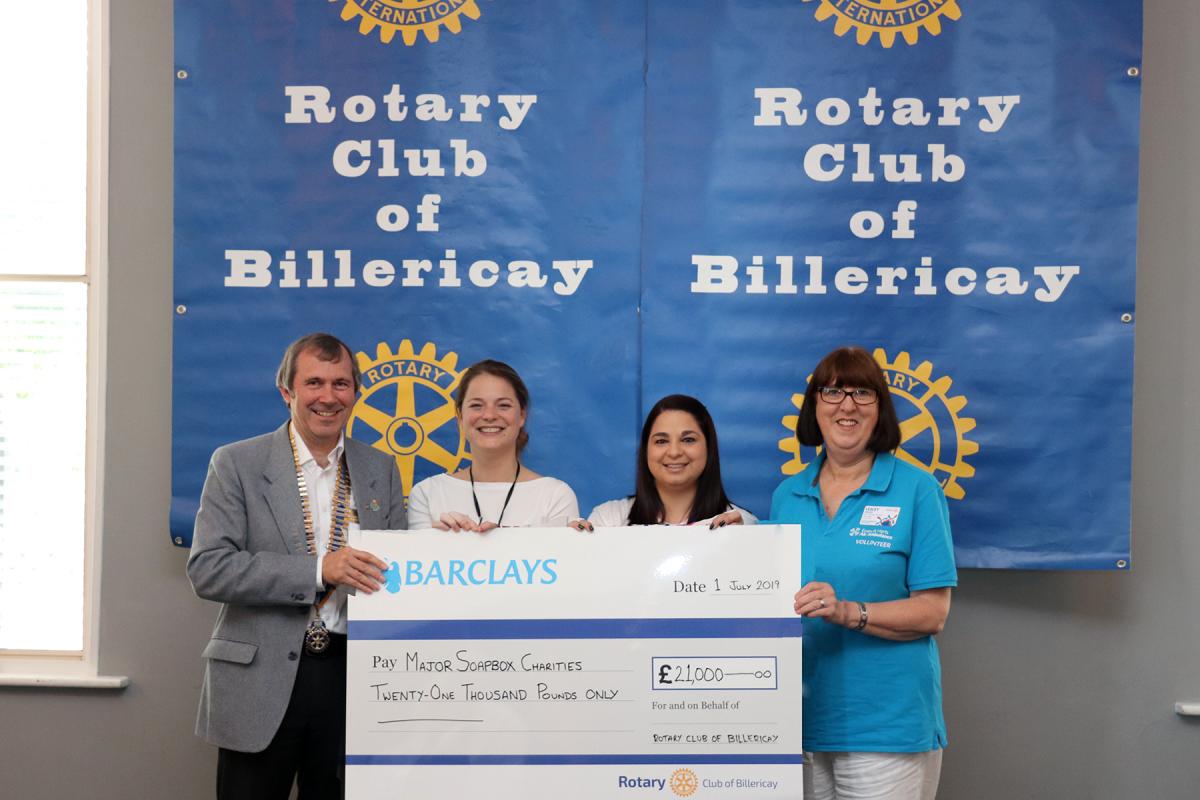 Three of the Charities receiving their money

Big Cheque for a BIg Amount 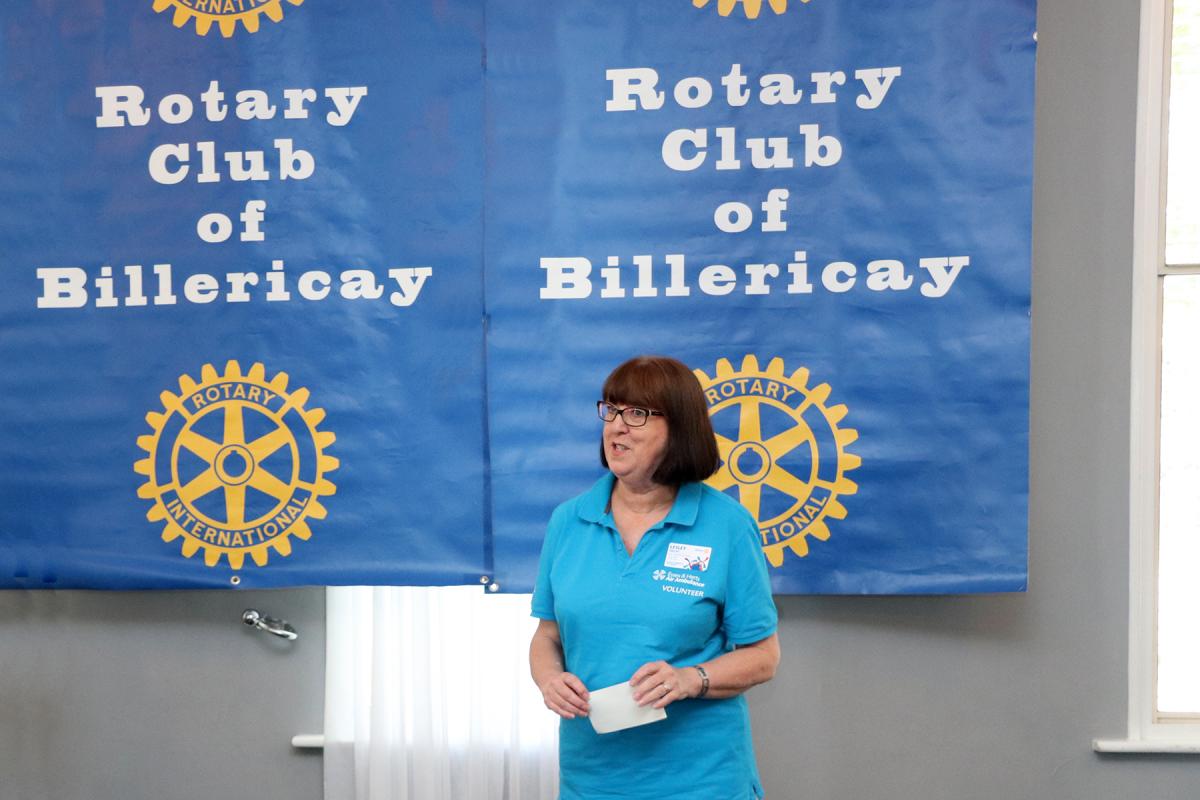 Thank you all so much 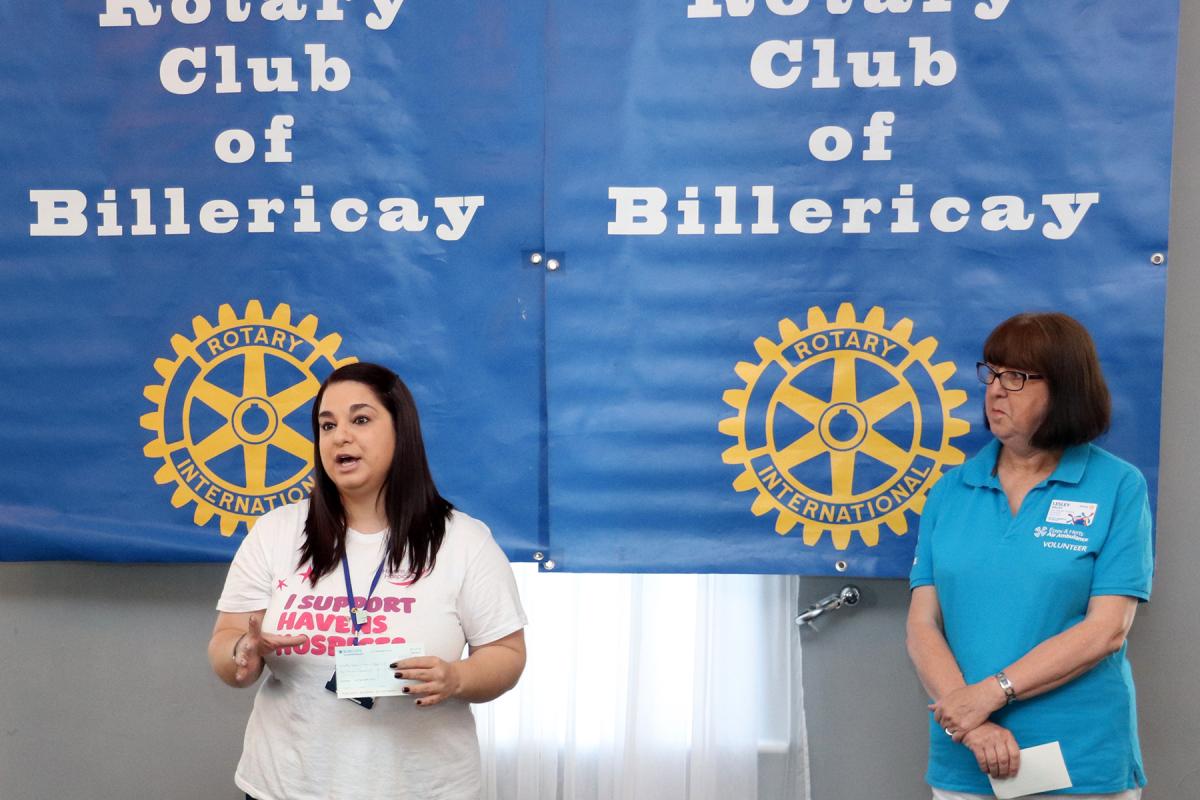 We are so grateful

Giving the real cheque to MSF

We are so thankful for your continued support 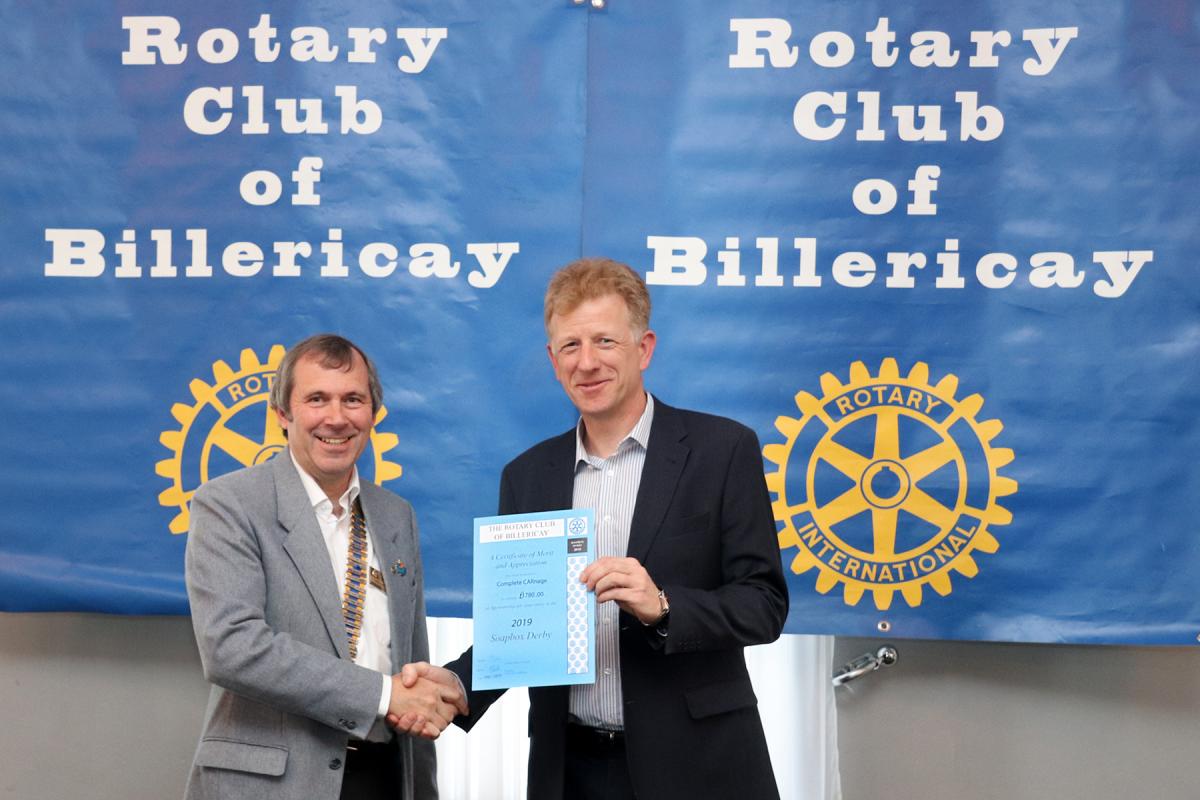 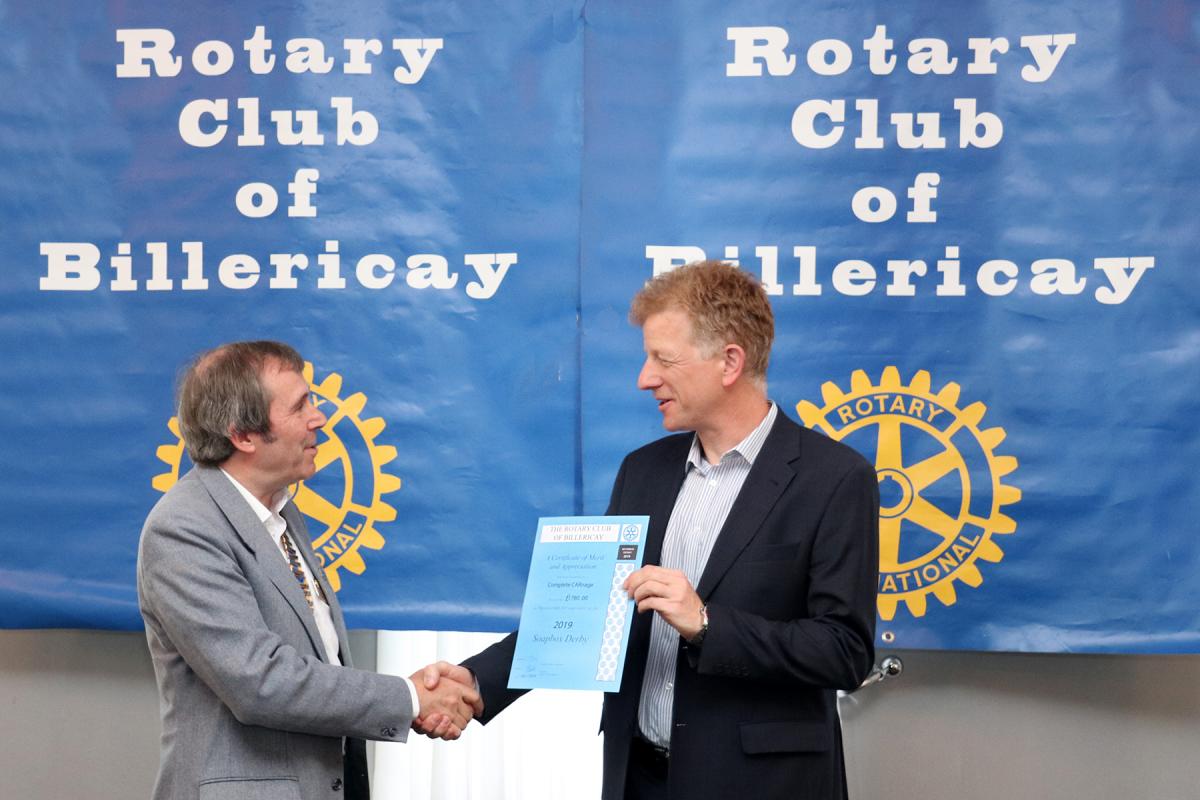 Recognition of this great support 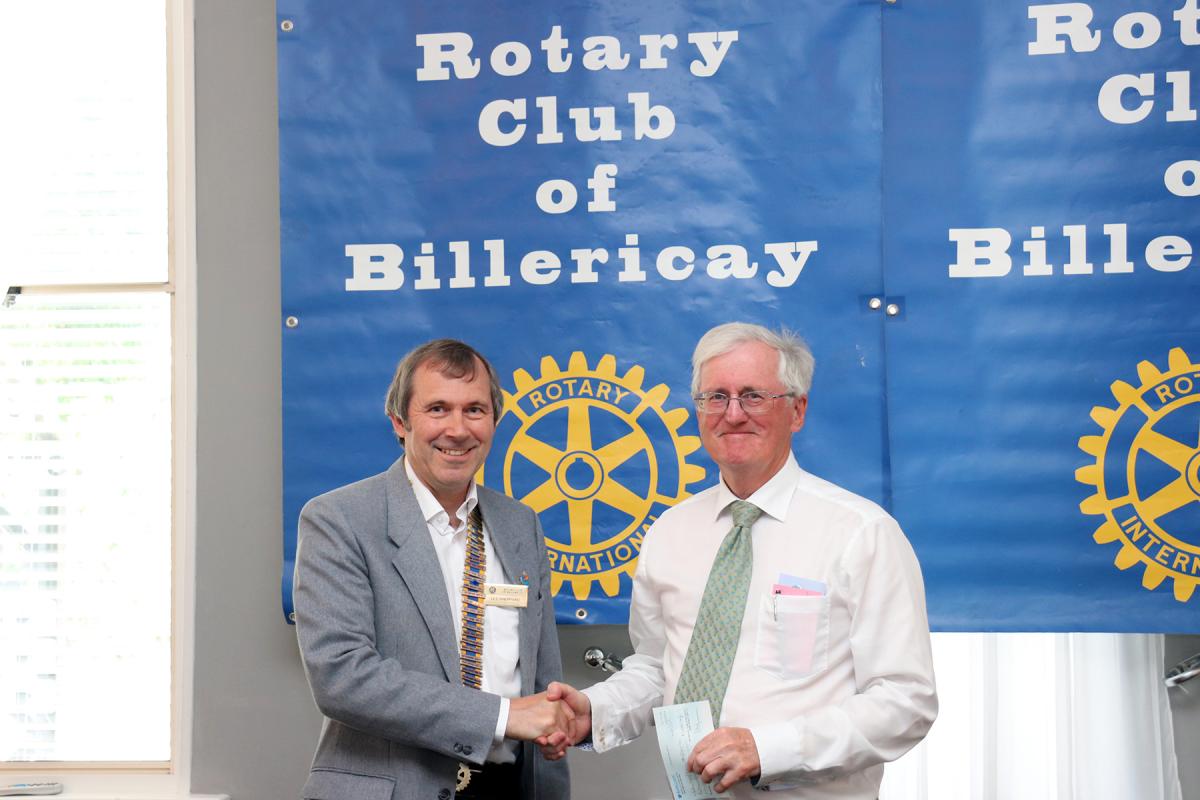 Donations to two of their main charities

Charity Begins With Us

Our Soapbox Derby is a community event to bring everybody together, to have a lot of fun, AND to raise money for Charities.

Each year we invite representatives of the club’s chosen soapbox derby charities to come along as guests of the club to receive their donations.

The other major charities, which were Rotary Foundation End Polio Now receiving £4,000 and Ciamanda School in Kenya receiving £2,500, were unable to attend but had been sent their donations.  In the absence, due to sudden illness, of Yvonne Kyndt, newly elected President of the Rotary Club of Billericay Mayflower, Alistair Moulds stepped in to receive a cheque for £1,000 for its chosen Ramsden Hall School project and £500 for BOSP.  Including cheques for £1000 presented to Quilters School the day before, a total of £21,000 has been donated to major Soapbox Derby charities.
Smaller donations of £250 have also been presented to Billericay School 6th Form, Buttsbury Primary School, Billericay Youth Town Council and to three charities chosen by the winners of our Social Media draw.

All the recipients thanked the club for their generous donations. Rotarian Leslie Sulley, last year’s District 1240 DG, wearing her other hat, said that, in the past year, the ambulance air service had made around 2,000 flights to save lives. It cost over £50,000 a year to maintain the service. Our cheque would go a long way to help.
Elsewhere in the newsletter, are reports of our donations of £250 each from the Soapbox Derby to Buttsbury Primary School, Billericay Youth Town Council and The Billericay School 6th Form.

Secretary Ed read out a lengthy thank-you letter from Mary’s Meals which continues to be one of the Club’s supported charities.

Our Thanks Goes To …

Finally, we were delighted to present a certificate recognizing the outstanding achievement of the Complete CARnage team in raising sponsorship of £1780.  Jan Lewis, the team leader and guest at our meeting was on hand to accept it and in thanking us for all the hard work we had put into making the event such a success, pleaded that the vent should take place again in 2020!

(Paul Mulligan, team leader of VW Down Under, had raised sponsorship of £2300, but was unable to attend for business reasons, but sent his best wishes and thanks.  The certificate has been sent on to him.)