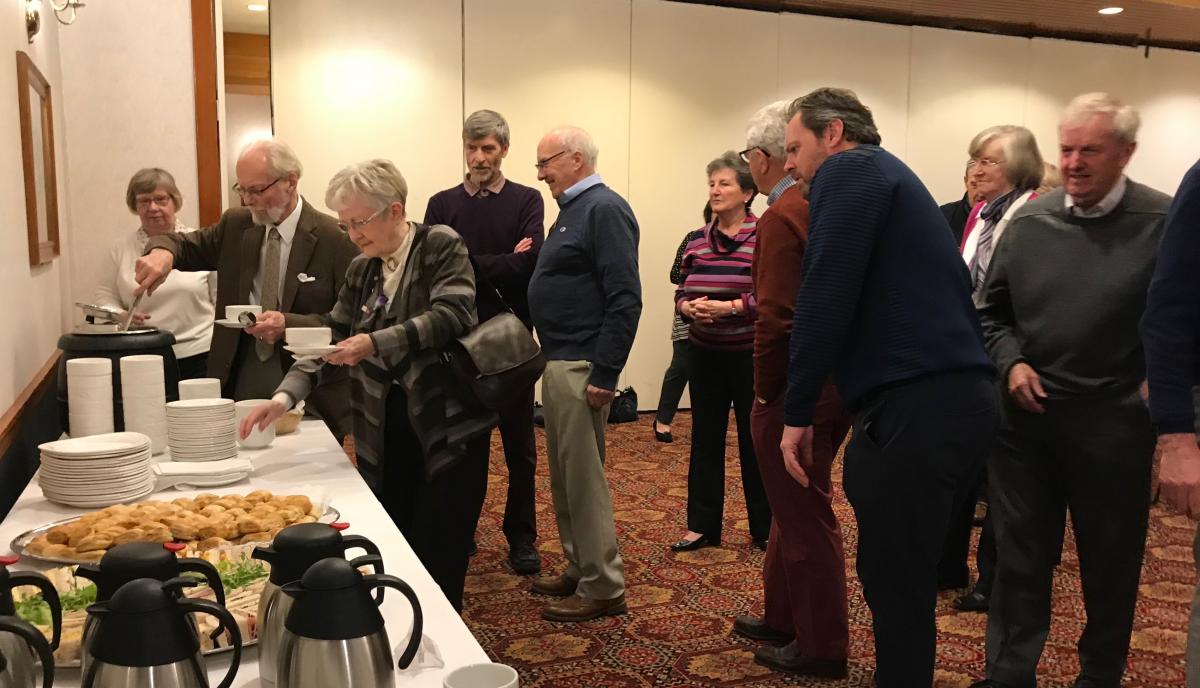 A diverse group of 13 guests were welcomed to this  meeting to explain and describe the role of Rotary and perhaps encourage some or all of them to join the Kilrymont Club.

President John Fernie outlined the aims and objects of the organisation from its inception in the USA in 1905 through its growth – including the first Scottish club formed in Glasgow in 1912 – to the present day. Rotary International now has 1.2 million members in 35,000 clubs worldwide.

Among the guests were Claire Simpson and Lewis Lennie, representing Fife Young Carers, a group which the Club regularly supports with financial donations.

Claire talked of the amazing work done by a large number of young carers, aged from 8 to 25, often in terms of looking after their parents. Claire and her colleagues offer help and comfort to such carers who in many cases suffer loneliness and need support.

One of them is young Lewis Lennie, who devotes much of his life to looking after his mother.

President John Fernie awarded Lewis a certificate naming him as the Rotary Club of Kilrymont St Andrews Young Carer of the Year. In addition, he presented Claire and her organisation with a cheque for £200.

Moving on to the other major business of the evening, Bruce Rollo addressed the nine prospective new member guests with some of his views and thoughts gathered in a 25-year membership of Rotary in two different clubs.

Bruce reckoned there had been a huge number of changes in Rotary during that time, mainly concerning what had been an extremely formal organisation now enjoying an informality which was a considerable benefit to fellowship and building relationships. This was critical to the core of Rotary which still firmly retained the purpose of helping others and communities rather than its members helping themselves.

Bruce stated that the Kilrymont Club was populated by members from all walks of life who were like-minded in supporting and developing projects which aided many facets of the local community.

He detailed a number of the projects which the Club had run during the year, including two separate events to assist local children with educational difficulties. This, he said, echoed the sentiments of President John, who earlier had stated the Club’s determination to support as many projects involving help for local youth.

As an adjunct to Bruce’s presentation, Eric Fraser took the floor. He joined the Club six months ago and gave a concise – and amusing – verdict of how he had discovered Rotary and the ways in which it had helped both his retirement and movement to a new town and his own wish to aid the community.

It was remarkable, he said, how the Club made such a notable difference to St Andrews and the locality and that he was delighted to have become a part of it.
The evening closed with a general discussion of Rotary’s role in the community.