The club’s guest speakers on 2 October 2019 were two Rotary Peace Scholars, Camillia (Cami) Freeland- Taylor and Safa Al-Gahoum, both of whom are studying at Bradford University. 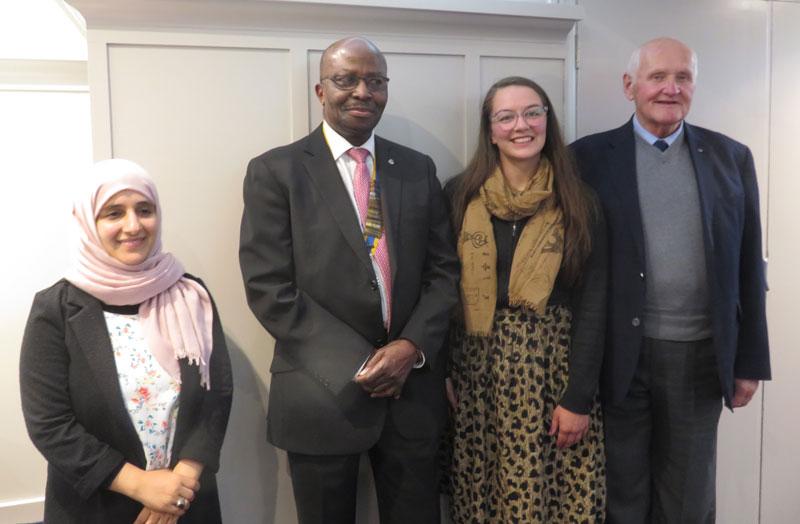 Each year Rotary International award up to 100 Peace Scholarships, 50 to study for a Masters degree and 50 for certificate studies, at five premier universities around the world, Cami and Safa both chose Bradford University.  Accepted Masters candidates study peace and development issues with research-informed teaching and a diverse student body. The program lasts 15 to 24 months and includes a 2-3 month field study, which participants design themselves. In the Professional Development Certificate programme: experienced leaders gain practical tools for promoting peace and international development during an intensive, 3- month programme, which includes 3 weeks of field study and peer learning opportunities with a diverse group.

Cami spoke first. On graduating from University she joined the US Peace Corps and spent time in a remote village in Zambia advising on agriculture and spending a year learning the language. During her time there a child died while crossing a river to attend school so Cami set up a project to build a new school obtaining global grants to help. Returning to the USA she joined the Dept .of Agriculture in Washington DC before going back to Zambia where she has been for the last five years. The school is doing well and Cami says there is so much talent there but sadly the opportunities are lacking. She quoted the philosophy: “Peace is more than the absence of war, real peace comes from our hearts (inner peace) and leads to peaceful relations in the family and community and among nations. Let’s inspire others with non-violence every day…let’s be messengers of peace in every interaction.” Continuing Cami discussed the Global Peace Index which is in its thirteenth year and is researched and produced by the Institute of Economics and Peace. The index ranks 163 countries and is based on 23 indicators ranked 1 to 5 which are 6 measures of ongoing domestic and international conflict, 10 measures of societal safety and security and 7 measures of militarisation.

The key findings this year are:-

1. The average level of country peacefulness has improved by 0.09% from last year. This was the first improvement in the last five years

3. Deteriorations were primarily driven by changes in: Perceptions of Criminality, Internal and External Conflicts Fought, Incarceration

4. Improvements were driven by changes in deaths from internal conflict and military expenditure

For the thirteenth year Iceland is the most peaceful country while the four least peaceful countries are Afghanistan, Syria, Sudan and Yemen. Over the period 2008 to 2019, 81 countries have become more peaceful and 81 less peaceful with peace declining 3.89% in that period. It is estimated that the global cost of conflict is $14.8 trillion and is equivalent to 35% of GDP in the ten most violence afflicted compared to 3.3% in the ten most peaceful. Climate change is considered to be an exacerbating factor in conflict in the future. Cami finally discussed the positive effects of peace which give greater prosperity and stability to the population.

Safa then spoke about the conflict in her home country of Yemen. She spoke of the causes of the conflict which include political leadership, social fragmentation, relations with neighbouring countries and the country’s limited natural resources .The situation is worsened by a high growth rate, a very weak education system and low level of skills. Safa then discussed the influence of internal and international dynamics on the conflict and how the declared humanitarian emergency, described by the UN as the worst in the world, has little prospects of being resolved for a number of years.

Rotarian Glyn Parry who had been responsible for finding out about Peace Scholars and arranging their visit gave a vote of thanks. He commended Cami and Safa for their work, thanked them for their very interesting and informative talks and for travelling so far to come and talk to the club.