Join us for a Bingo Night to support End Polio Now 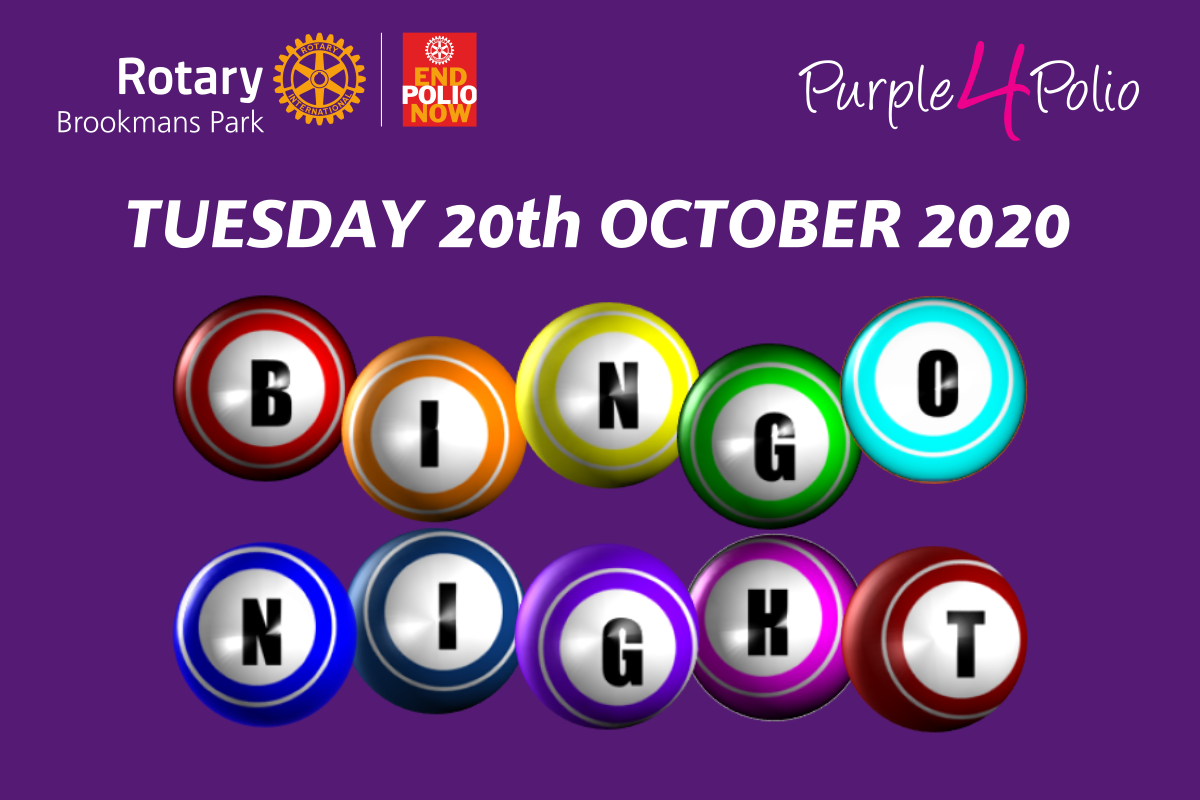 We are approaching World Polio Day on 24th October and we had hoped to repeat last year’s successful Chinese Karaoke Night.  With the current restrictions in place that is now impossible so we have moved to an online Bingo Night and we hope you can join us for this fun evening and raise funds towards the End Polio Now campaign.

You purchase a Bingo card per person, so if there are two of you on Zoom you would buy two Bingo cards.  For each order we will send you a link to your Bingo card(s) which you can either download and print or on the night play online.  We will play six games on the night, so you will need to print six copies of your Bingo card. We will also send you one Zoom link per order for the evening.

The monies raised will be split towards End Polio Now and prizes for the First Line and Full House for each game. 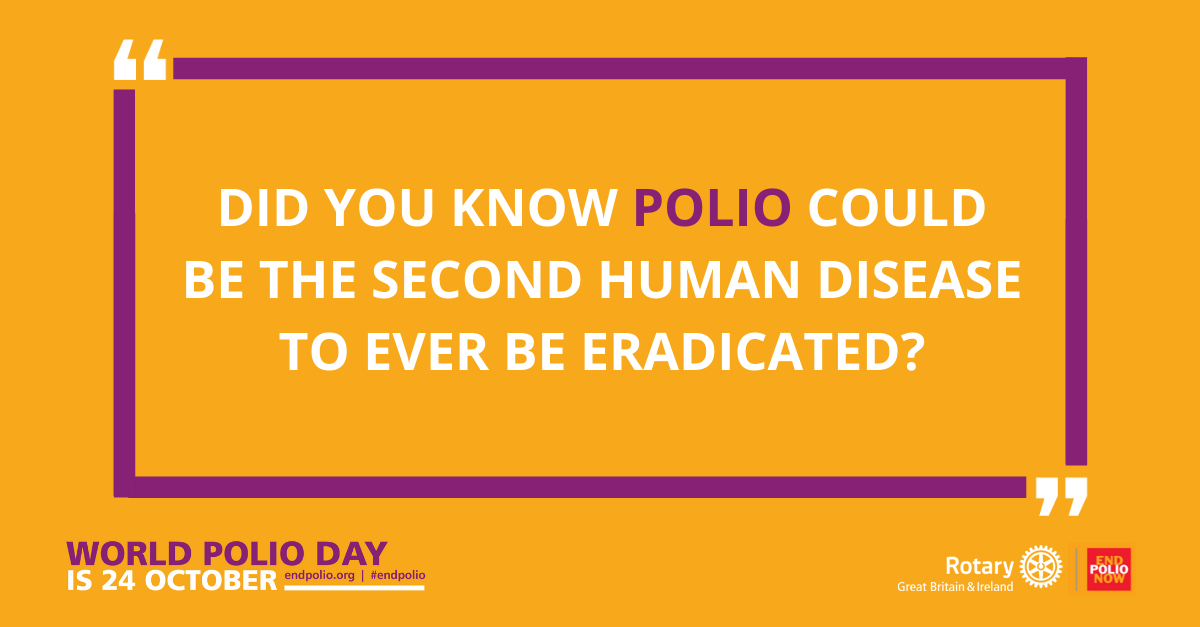 Many polio related activities will be using the colour purple, which has become a symbolic colour in the fight against polio, inspired by the colour of the dye painted on the little finger of a child to signify they have received a potentially life-saving polio vaccine.

If polio is not eradicated, it is estimated that, within 10 years, as many as 200,000 children annually all over the world could succumb to polio, including here in the UK.

Globally, more than 2.5 billion children have been protected against the disease, which have reduced the number of cases by 99.9% from around 1,000 cases per day in 125 countries. Rotary has committed to raising US$50 million each year to support global polio eradication efforts and thanks to the Bill and Melinda Gates Foundation every £1 we raise is matched 2-to-1 so is worth £3.

In August, Rotary and the world celebrated a significant milestone, as the World Health Organization certified the Africa region, which includes 47 countries, free from wild polio.

This leaves just Pakistan and Afghanistan as the two remaining polio endemic countries in the world. But despite this momentous progress, more challenging work lies ahead to eradicate the disease for good.

“We are proud to be marking World Polio Day locally at Brookmans Park and recognise the work of Rotary and our partners and the millions of people involved in so many ways in the fight for a polio free world. Only together can we end polio, a virus that is still potentially just a plane ride away. 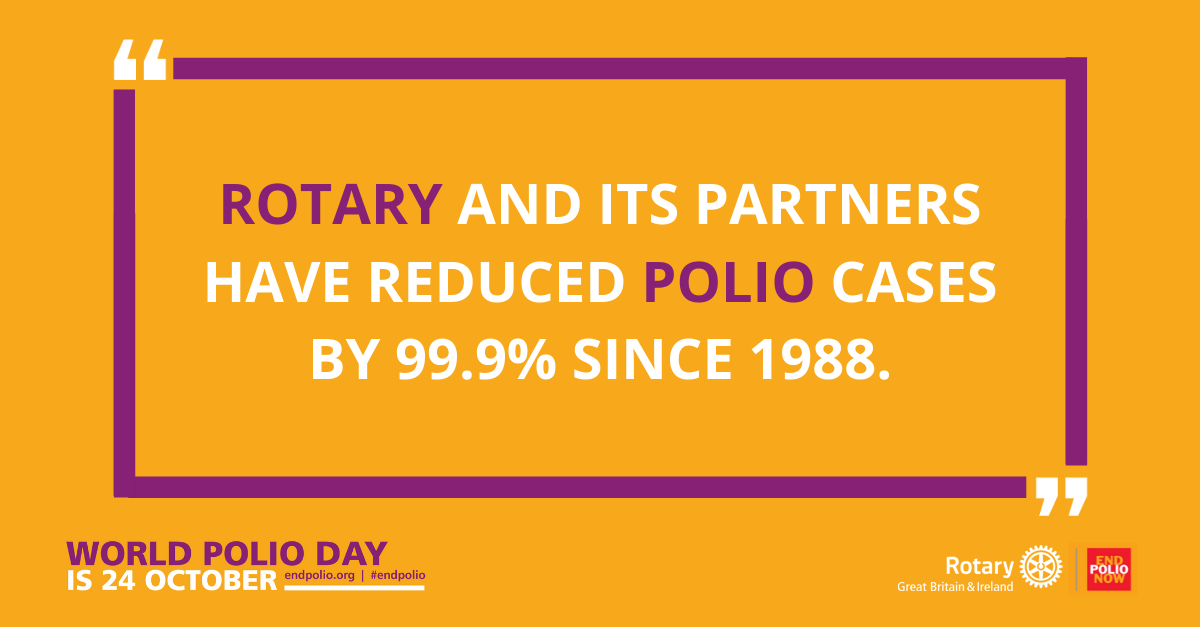 “We have seen how we need to work together when dealing with COVID-19 and we can all play our part. The members of [Rotary club name] remain committed to working with our communities and our partners to eliminate this potentially deadly virus and make Rotary's dream of a polio free world a reality.”

Rotary has directly contributed more than US$2.1 billion to ending polio since 1985.