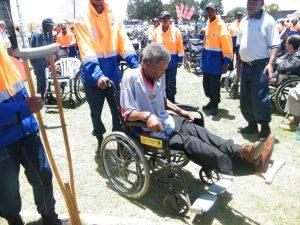 The wheelchair project is one of the most successful and long-running initiatives. It began in 1993 and is still going strong today. The original idea took hold after members realised that there was an urgent need for wheelchairs in the Johannesburg area.

The call for wheelchairs was sent out and Rushmoor Rotary in the United Kingdom took up the cause. Wheelchairs were collected from agencies such as the Red Cross and national health hospitals who had been storing old wheelchairs in depots across southern England. The first consignment of 56 wheelchairs arrived, courtesy of Swiss Air. Thereafter, wheelchairs were dispatched by sea.

When they arrive Northcliff Rotary collects the wheelchairs and distributes them countrywide through affiliated Rotary clubs in other districts. More than 22,000 wheelchairs have been provided to worthy recipients across South Africa, totally free of charge.

For more than ten years Federated Employers Mutual has been the only funder of this project. However, Sesego Cares recently joined the partnership. This achievement has given thousands of people the opportunity to become mobile, often for the first time in their lives.