We support Local, National and International Charities and this year has been difficult.

Like many other organisations whilst our activities were suspended we supported the community where we were able. In addition to funds available from past events members topped this up with personal donations. We have donated money to a number of charities over the past 12 months including Newbury Cancer Care and Swings and Smiles see list below. Some members have also been involved with Berkshire Visions one to one befriending scheme and keeping in telephone contact with visually impaired elderly persons unable to get out.

A number of our members and their partners also volunteered to help at the Newbury Race Course vaccination centre.

Whilst our normal fund raising activities have been restricted, we have one member who has produced a music album for two nominated charities.

Thatcham Rotarian and Immediate Past District Governor Frank Quinn has produced a CD Charity Music Album called Blue Hearts and Purple Flowers. Frank has been interviewed on Kennet Radio where they played two of the tracks from the Album. There are 10 in total.  Copies are available from Amazon Music and YouTube and supports Hope and Homes for Children and End Polio Now.

We have donated over £11,750 since last years March Lockdown (see list below), and Frank Quinn has donated £3000 to his listed charities..

The Charities and Organisation supported include : -

If you would like to support us to support Local Charities effected by COVID please donate using the PayPal Button. Thank You 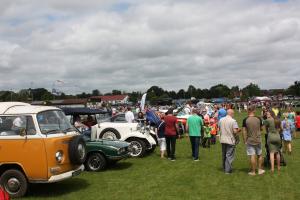 Photos of our fun and events

The Rotary Club of Thatcham & District was formed in 1982 and a number of original members are still active in the club today. We like to believe we live up to the objectives of Rotary by giving service, sharing our knowledge and having fun.