Zooming into the Scarborough Scrubs Group

President Andrew opened the meeting by welcoming our special guest for the evening Councillor Mrs Hazel Lynskey, Mayor of the Borough of Scarborough, together with a number of the members of the scrubs group in the audience of 29 people, who had tuned into hear the talk. 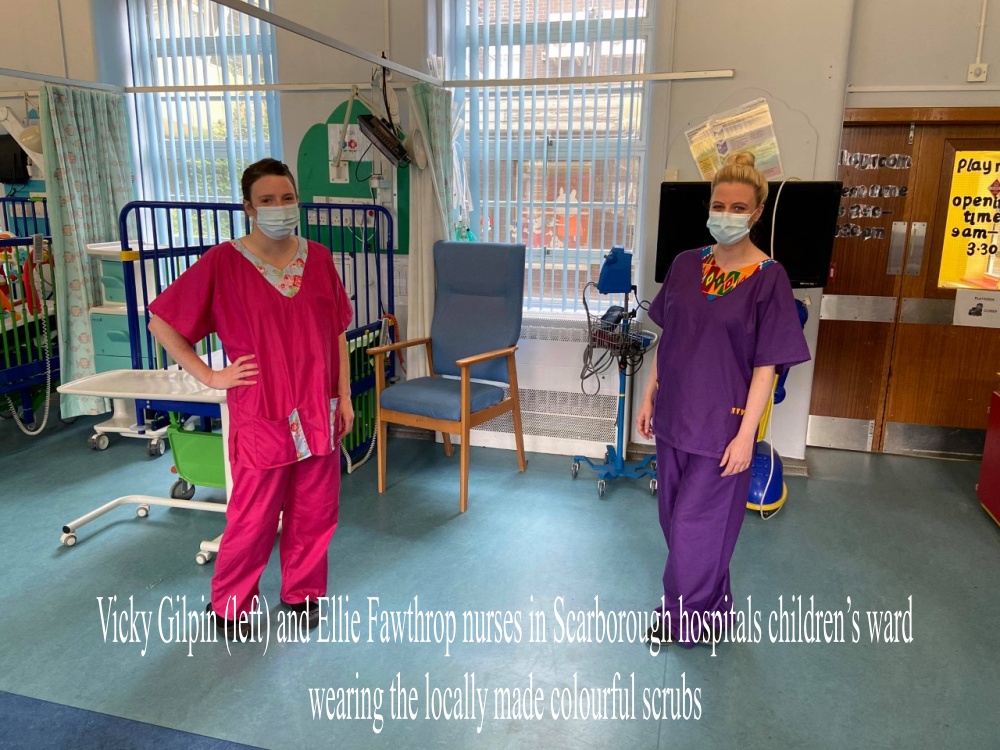 Charlotte began by explaining that the idea of establishing the scrubs group had been triggered by an A&E nurse in Boston Lincolnshire, Ashleigh Linsdell, who had a side-line in sewing and wanted to make scrubs for her department.

She had spotted that many hospital staff who would not usually wear scrubs were required to change into them several times a day to reduce the risk of spreading Covid-19.

To say that her idea soon spread is an understatement, as there now are about 70,000 scrubs makers across the country and 400 in the Scarborough area group alone, with 200 sewers at any one time.

Their Facebook group has over 500 members, with at least half of these sewing – some sewing up to 10 sets of scrubs a week.

More than half of the sets have gone to the town’s hospital, with pink proving to be the most popular colour.

However, the group have proved scrubs across the Borough to local hospitals, district nurses, GP surgeries, care homes and Saint Catherines etc.

The most unique request came from monks in Muston, who requested 12 sets.

Lots of fabric was needed; so as well as donations of bedding from residents, they received help from local businesses, such as Scarborough Curtains, Morrisons and Prontaprint that helped with print to name but a few.

Interestingly, Noah Evans, the son of Chris Evans the TV presenter, raised over £122,000 by camping out for a month in his Surrey garden and almost a third of the Scarborough groups fabric came from Noah’s fundraising efforts.

Charlotte then handed over to Iona who was responsible for the logistics of the group co-ordinating orders and ensuring that the finished article arrived at the right place at the right time.

It is fair to say that they task has taken over both co-ordinators lives working 18-hour days, 7 days a week for the past few months.

Tim Kirkup also played a huge role by acting as the group’s press and PR guru but more importantly providing the laser machine that helped the group cut the material for the sewers.

Doreen Brook, one of the sewers, explained how being part of the group had helped her personally.

She had recently lost a loved one and the team ethos within the group had helped her through this difficult period of her life Doreen had made 122 sets of scrubs with lots of different colour combinations and had really enjoyed the experience.

Iona made the point that the colourful scrubs sets has helped to lift the spirts of staff and patients in the hospitals, especially in the children’s wards.

They had provided face coverings to the wider community too and were charging £4 a mask but did not want to deny the disadvantaged in society; so simply asked people to pay what they could afford,  they have so far raised £698 from 5 outlets across the Borough to go to their chosen charity.

Charlotte concluded by explaining that the group had more or less fulfilled their role as scrub makers and were looking for other things to do. In the future she is hoping to stage a big party for all group’s member, as many have never met each other due to the Covid-19 pandemic.

The other idea is to hold an exhibition of images of the seamsters, one of which is Evie who is only 6 years old.

The mayor then thanked the group for their sterling efforts across the Scarborough area and announcing that the Group would be the recipient of one of 71 Borough Hero awards soon to be presented to people/groups who had performed outstanding community service during the pandemic.

Not only that but the Mayor admitted that the idea for these awards had in fact been inspired by the work of the Scrubs group, which she had been following since they first started their work.

Councillor David Jeffels, a North Yorkshire County Councillor, who was listening to the talk also offered to make a contribution of £300 from his ward community fund to the group.

Bob Thompson then paid his own tribute to the group by highlighting the work of his own daughter, who was a nurse and had experience at first hand life on the wards during the pandemic during his vote of thanks on behalf of the club.

The club has acted as a material collection point, together with creating a Virgin Money Giving website to receive cash donations. In addition, a press release was issued by the club in June to help raise the profile of the group’s work and encourage more fabric donation

Iona Calvert posted as folows on the Scrubs website 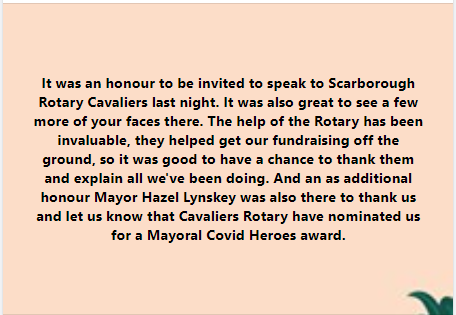 Chocolate is good for you -Xocolat Ltd

more Introduction to our local seaweed farm and all its uses

From field to Fork

more For the last two and a half years sixty plus volunteers have run the library and organised a range of activities and events.

back ...in many ways - members are trustees of several charities; local organisation join us at our community fair to spread their message and raise cash; we join in events such as the CAMRA festival to raise money for local causes .......