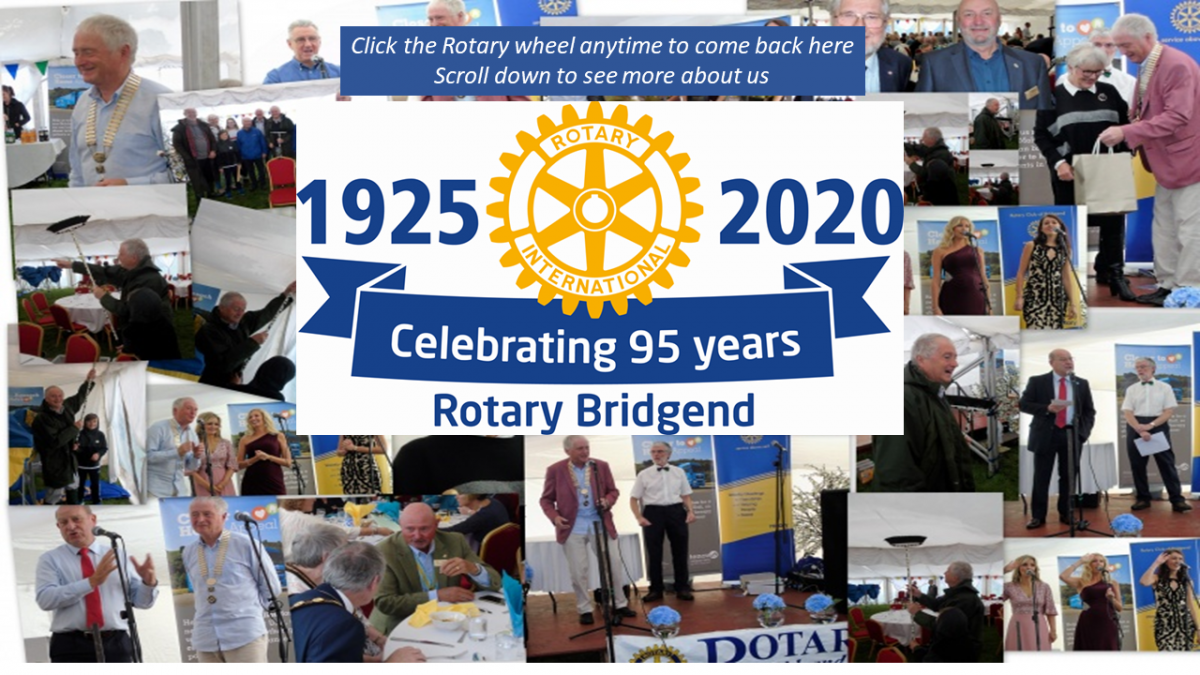 Bridgend is the principal town within the County Borough. It is situated between the capital city of Wales, and Swansea. A market town, it has a population of some 40,000 people (1975), it is situated near the sea and the area has a history of mining and iron industries. Bridgend is the gateway to many beautiful areas - the heritage coast, the Ogmore, Garw and Llynfi valleys with the Bryngarw Country Park dominating the valley entrances and the picturesque village of Merthyr Mawr with its thatched cottages giving way to the windswept sand dunes on the coast are but a few of the delightful places to visit. 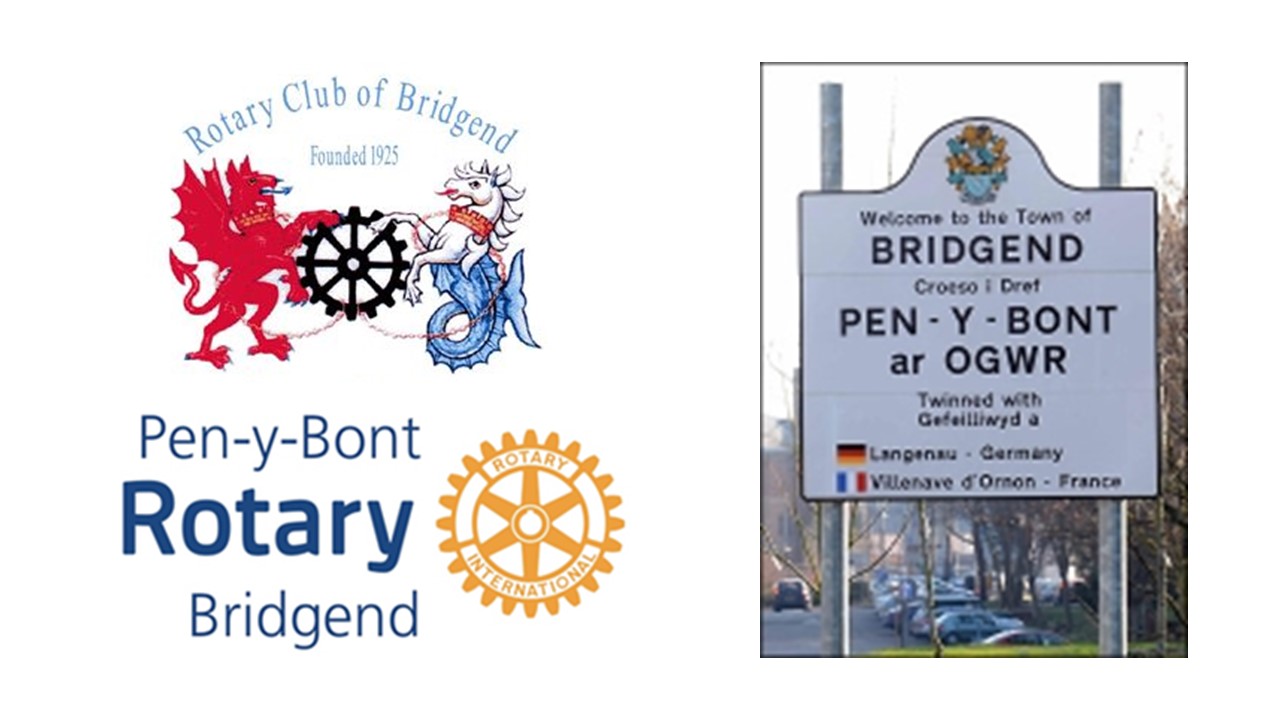 A Brief History of Rotary Bridgend

The founder and the first president of the Rotary  Bridgend was Robert Horrocks, previously a member of the Rotary Club of Cardiff. The Club was formed on 15th December 1925 but the charter was presented at a dinner on Monday 15th March 1926 at the Wyndham Hotel in Dunraven Place.

In 1975 the Rotary Club celebrated its Golden Jubilee, which encouraged past President Benson Roberts to prepare and publish a booklet entitled "Monday is the Day", A copy of which is held in the main public library.

In 1945 Miss, late Dame, Agatha Christie enjoyed a post-war austerity luncheon. She was happy to answer questions on detective fiction in general and criminology. President Frank Edwards in introducing the speaker said "that contrary to public opinion that crime did not pay, it certainly paid our distinguished guest". This shy and charming lady greatly honoured the Rotary Club of Bridgend by making, according to her daughter's statement, her first speech in public.

On 24th July 1950 Miss Jessie Mathews, who was the lead in the film Pygmalion at the Embassy Cinema, attended the Club. President Benson Roberts thanked her for her attendance. The proprietor of the Embassy, George Isaacs, later became a member of the Rotary Bridgend.

The Original banner incorporated the perfect motto: A VO PENN BIT PONT. He who would be a head (leader) him be a bridge. This is an adaptation of the coat of arms in use by the now defunct Bridgend Urban District Council. The club is the first local organisation to use the Borough badge on its banner which formed part of the Bridgend County Borough Armorial coat of Arms. 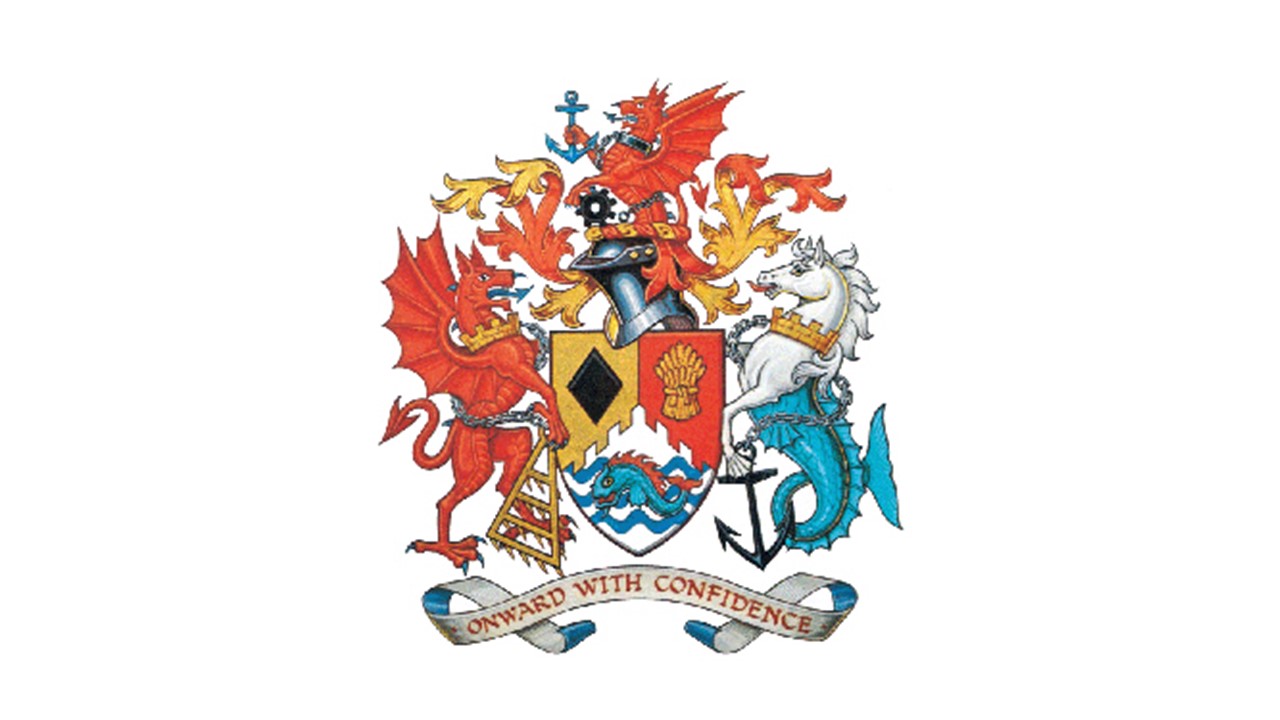 Interpretation of the Armorial coat of Arms.
The shield on which the arms are borne is divided into three sections. On the left hand section the black diamond symbolises the coal industry in the area and the golden wheat sheaf enclosed in the right hand section signifies agriculture. The third section at the base of the shield is enclosed by a ragged line which represents a part of the heritage coastline and the County Borough's association with the sea is depicted by a green dolphin on the three wavy blue lines.

Crest
On a wreath of red and gold on top of the helmet, the red demi-dragon with a steel collar and chain around its neck and bearing in its right claw respectively an anchor and an engineering wheel, signifies industry.

During the Rotary Centennial Year of 2005-6, part of the Bridgend northern distributor road was named Rotary International Way. This is the main road into the town centre from the M4 Motorway and was officially opened by the Worshipful the Mayor of the County Borough of Bridgend Councillor Beverley Quinnell assisted by President Matt Evans.