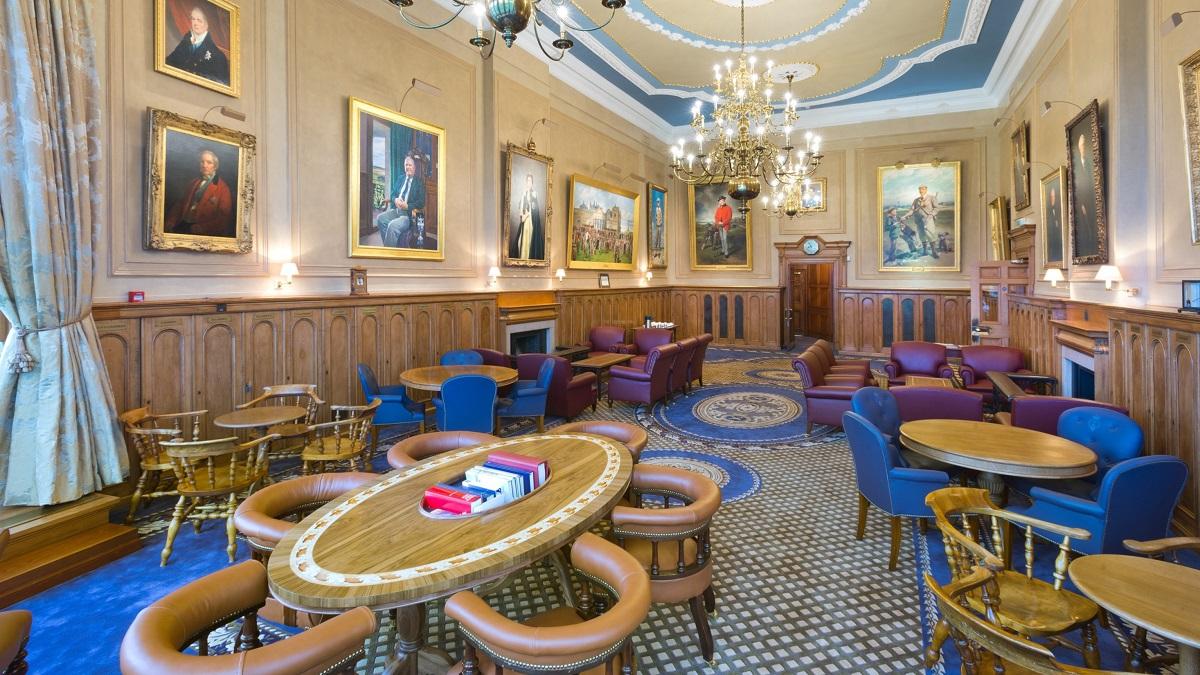 Member David Sandford gave a talk  on the Big Room of the R & A clubhouse. David, a long time member has been to over 400 clubhouses in his golfing career, but none has a room to match the R & A Big Room.

The R & A building was completed in 1854 , extended in 1866 to incorporate a bay window, making the room 12 feet longer. It now houses a gallery of 16 paintings. The Queen as patron is there as well as William 1V , the granter the Royal Charter in 1834. Sir William Orpen’s 1927 painting of the Prince of Wales in a sweater, set a trend in golf wear.

Other famous names to adorn the walls are Field Marshall Haig, painted by James Guthrie, one of the Glasgow Boys, and Frederic Guthrie Tait, a former Champion, painted by Henry Lorimer and soon to go on loan to The National Gallery of Scotland. David Martin from Anstruther, is represented by a picture of John Balfour Hay of Leys, donated to the club in 1922.  David is mostly remembered for his painting of Benjamin Franklin which hangs in the White House

There are pictures of local significance, Sir Hugh Lyon Playfair by James Wilson and Major George Whyte Melville by Sir Francis Grant, donated to the club in 1927. The fountain in Market Street , erected by his mother , commemorates his death in 1878. The 1903 painting by Sir George Reid of Tom Morris is there as you might expect.

The most recent picture to adorn the walls is that of Sir Michael Bonallack by Maggie Milne from Dundee School of Art. Sir Michael was Secretary of Royal and Ancient Golf Club from 1983 to 1999 and Captain from 1999 to 2000. Probably the most outstanding amateur golfer of recent times, winning the Amateur championship five times and was the leading amateur at the 1968 and 1971 Open Championship

Those members who frequent the R & A clubhouse now have a greater appreciation of what a magnificent collection they have on hand, and many others will be looking forward to St Andrews Day to acquaint themselves with the pictures in the flesh.