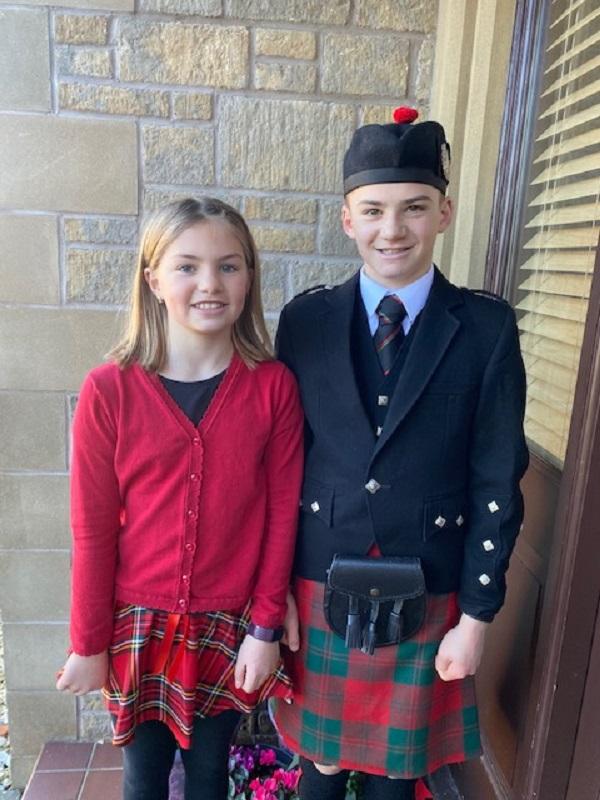 Club members and guests met for a belated Burns Supper on 1st March in the town’s New Golf Club in their recently revamped function suite. Holding this celebration of the Bard some 5 weeks on from 25 January was a deliberate decision taken by the Club while still living with COVID guidelines.

President Mike Dow welcomed everyone to the Burns Supper then handed over to Iain MacKinnon, Croupier for the evening.

Iain introduced two very talented youngsters, brother and sister Jamie and Carly McDonald. Jamie, a 12 year old pupil at Madras College, expertly piped in the haggis. Back in 2020 Jamie was the winner of the Charles Alexander Trophy, awarded by the Alternative Burns Club to the outstanding performer from all the town’s primary schools and in that same year won the Fife Burns award for his piping skills. Young Carly followed on from Jamie by effortlessly reciting a word perfect and animated Address to the Haggis. Jamie then gave a short performance by piping a selection of well-known Scottish tunes to conclude that section of the proceedings.

It was truly inspiring to see the youngsters perform so passionately.

Following a two course meal, which had on offer as a Starter the traditional Haggis, Neeps & Tatties, it was the turn of the first speaker for the evening. Kyff Roberts to deliver the Immortal Memory.

In his opening remarks he felt proud not only to be honouring Scotland’s bard, which he did eloquently, but also as a Welshman being able to celebrate it being St David’s Day.  Connections between Scotland and Wales were explored by Kyff.

A recitation of To A Mouse was given by Amitashuri Yule, daughter of club member James Yule.  As a Spiritual Wellbeing Practitioner, she injected her recitation with great feeling and emotion.

Kilrymont member George McIntosh gave a highly amusing Toast to the Lasses and very accurately referred to many of Rabbie’s notions on the lasses, reflecting as well on some of his own courting day experiences.

Another musical interlude followed with Mike Dow singing, firstly Mary Morrison, before then being joined by Iain MacKinnon to sing Go Fetch To Me A Pint O’ Wine, otherwise known as The Silver Tassie.

To conclude the speeches Marilyn Rowan Rhind, also a Kilrymont member, replied on behalf of the Lasses. She shared accounts of what Burns thought of women, their achievements in the last 200 years and concluded her amusing reply to the laddies by suggesting ‘we lasses couldn’t get along without them’.

The evening’s entertainment was brought to a close by Mike and Iain leading community singing of Burns Songs, ending appropriately with Auld Lang Syne.

Finally, Mike Dow gave a comprehensive vote of thanks to everyone involved in making the evening a great success.