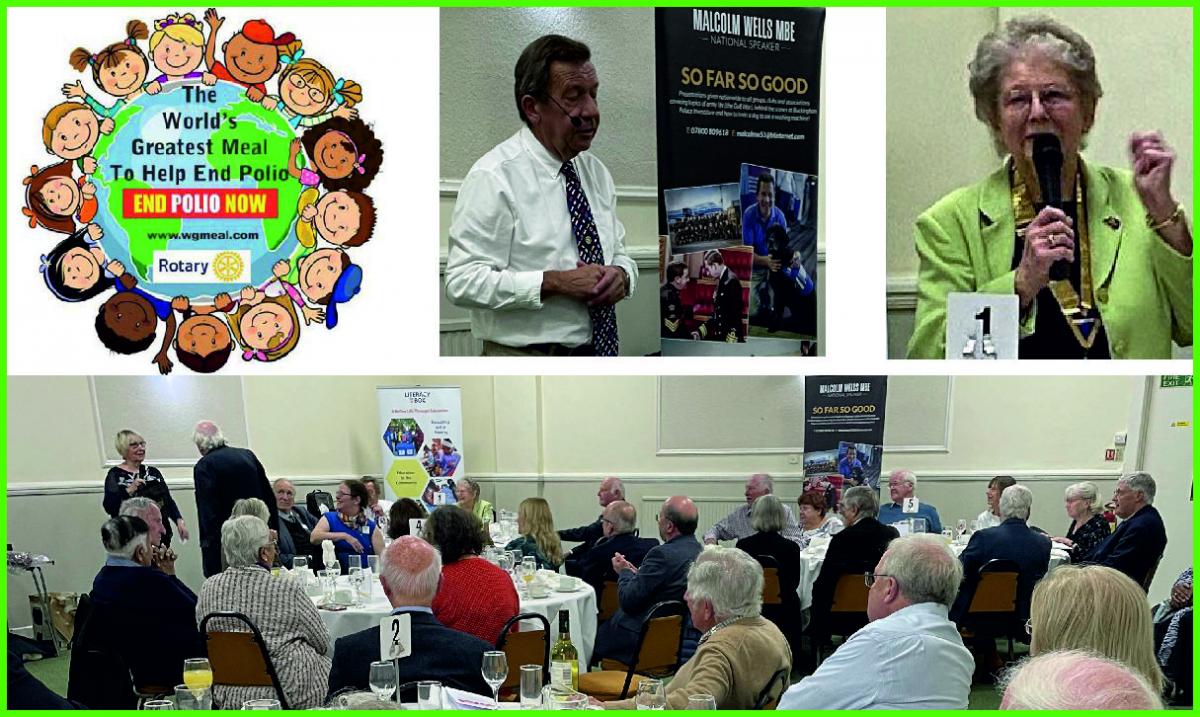 Croydon Rotary Club’s recent World’s Greatest Meal lunch, the first since 2019, far exceeded all expectations by raising £1000 for the End Polio Now Campaign. In addition to two large donations received beforehand, on the day the raffle raised £270.  (Each dollar raised is tripled by the Bill and Melinda Gates Foundation.)

Held on 08 November 2022, at the Masonic Halls in Croydon, club members and guests were joined by Rotarians from Addiscombe & Shirley, Croydon Jubilee, Carshalton Park, members from Croydon Inner Wheel, and Soroptimists from Croydon and Bromley.

The guest speaker was Malcolm Wells, MBE, PHF, who gave a fast moving, informative and entertaining talk “So Far So Good” about his time with the charity Canine Partners; his 24 years in the army as a musician playing cello on state occasions at Buckingham Palace; and the ‘behind the scenes’ experience of receiving the MBE and being mistaken for a member of the Royal Household. Malcolm has recently become a volunteer with Literacy in a Box. There was so much more he could have talked about but unfortunately our time was limited.

Graham Harker gave an update on the current situation regarding Polio world-wide. Rotary spearheaded the campaign at a time when there were over 1,000 polio cases a day in 125 countries, paralysing and even killing children. Today, the number of cases is down by 99.9%.

Over the last 35 years, Rotary members, working with communities around the world, have contributed more than US$2.1 billion and countless volunteer hours to the fight to end polio.

Inspired in part by Rotary’s volunteer commitment and fundraising success, the Global Polio Eradication Initiative (GPEI) was launched in 1988.

This remarkable partnership which includes Rotary, World Health Organization, UNICEF, the US Center for Disease Control & Prevention and, more recently, the Bill & Melinda Gates Foundation and GAVI the Vaccine Alliance. These organisations work alongside governments of the world to end polio.

If you would like to book Malcolm Wells for an event, contact him on 07800 809618 or email malcolmw51@btinternet.com

A NIGHT OF DANCE – WITH BELLS ON

more Croydon Night of Dance back on the streets again!

more Dedicated to the memory of Rotarian Tony Man 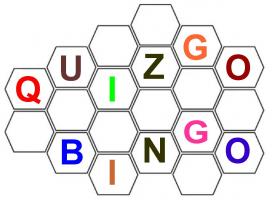 more A fundraising event for our charity, Crisis Skylight Centre

more What would your most unusual item be?

more A cracking night in!

more Can you help? 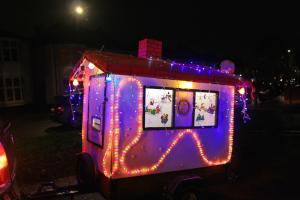 more To the Croydon residents who kindly supported our Christmas Collection

more at our Annual Quiz Night more OUR CHRISTMAS COLLECTIONS
WHICH RAISED £1350
FOR OUR CHARITIES more On 21 August,
local and other Morris Groups
will join together to bring
an evening of fun to Croydon. more In support of the 2017 Purple4Polio the Club will be purchasing
5,000 purple crocus corms in time for the planting season. more At the meeting on 14th February attended by Rotarians, partners and friends there was a collection for "the World's Greatest Meal".

back The Fundraising Committee exists to coordinate the year’s fundraising,
focusing mainly, but not exclusively, on the President’s chosen charity.