Due to current government advice the Rotary Club of Bromsgrove held its Business Meeting on 24 March 2020 for the first time on line using Zoom. During the meeting our President Tony Docherty inducted his wife Mu Docherty as a new Member. Mu has been an Honorary Member for several years and has supported the Club and Rotary more widely at home and abroad in a vast number of different ways, and so we are truly delighted that she has decided to convert her membership. We believe that Mu’s induction to a ‘non e Club’ during an on line meeting must represent a first for the District and should be celebrated!

more Kerala is going through unprecedented calamity not seen in over a century. The incessant rains and the resultant floods has already taken 330 lives as of today. The devastation to property is colossal. 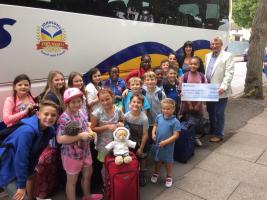 more President Tony presented a cheque for £2000.00 to enable special needs children of Yardley & Sheldon to enjoy one week on a camping holiday. 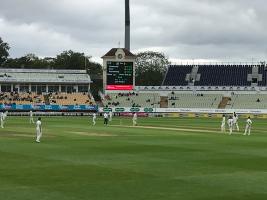 A Day out at Edgbaston

more DG’s day out at Edgbaston 19th August. This was organised with Chance to Shine. The day was hosted by PDG Paul Jaspal because the DG was in Dorset at the Children’s Holiday Centre. 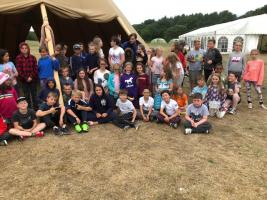 more The kids are having a wonderful time in a beautiful part of the country. The staff are superb and so are the facilities. Big thank you to Peter Styles and his team for a superb job.

Diary of a Rotary Doctor

more Rotarian John Clegg is a retired paediatric orthopaedic surgeon who worked in Coventry for 30 years before retiring in 2005. Every year for the past 13 years, he has worked in a polio camp in rural India. John has recently returned from the latest camp.

more Book your stall at the Extravaganza in the Botanical Gardens.