For more than ten years, in the period before Christmas, Normanton Rotarian Robert Burgess has organised an appeal for the collection of decorated shoeboxes containing gifts for children of all ages, which are then distributed to under privileged children 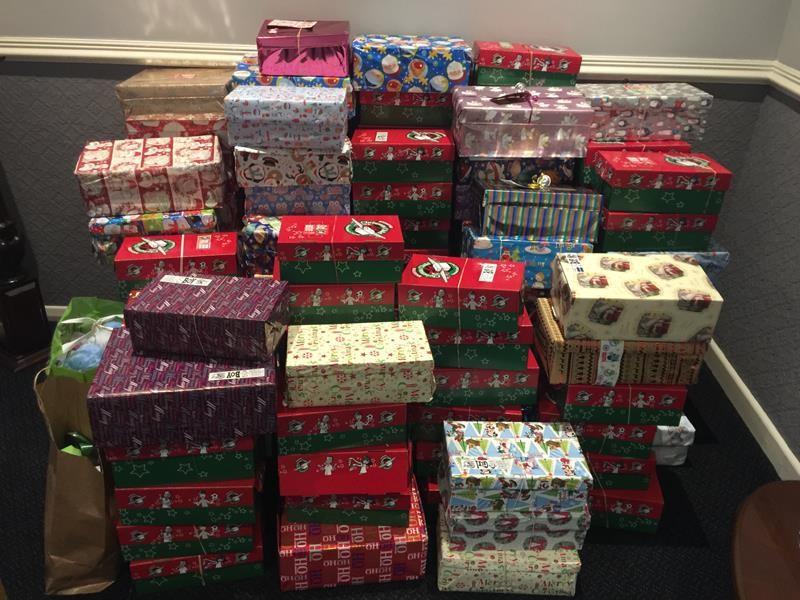 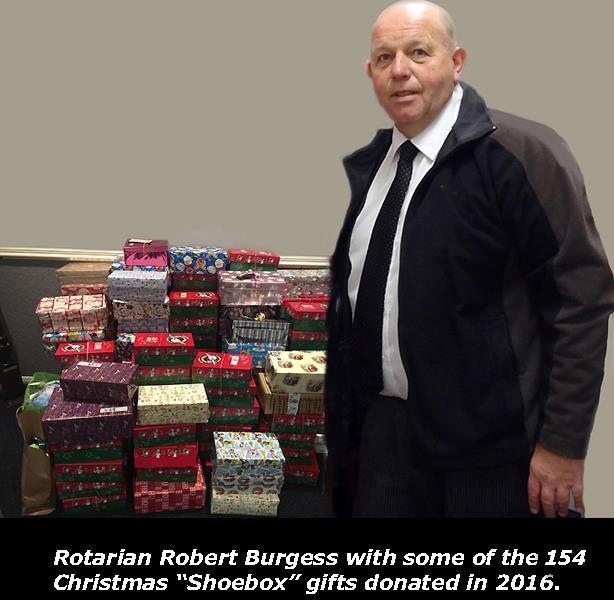 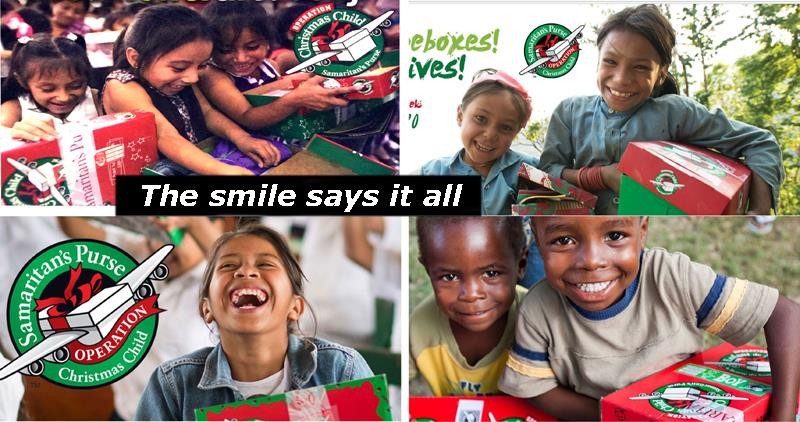 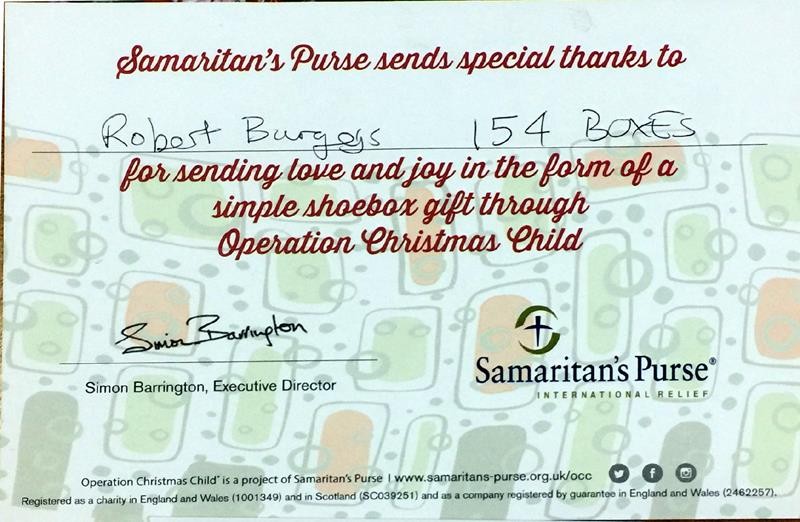 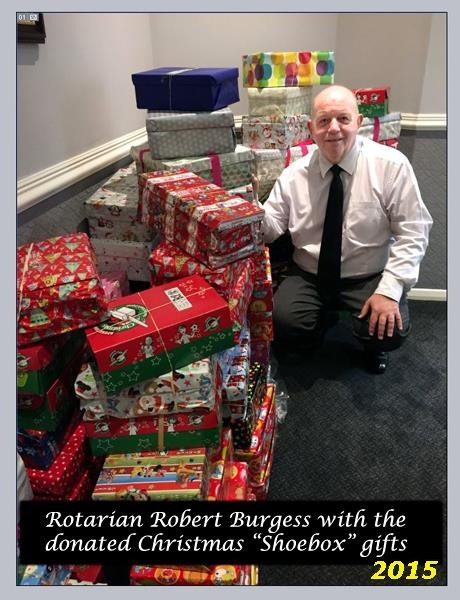 The boxes are then distributed to under privileged children througout the world.

These appeals such as the “Rotary Shoebox Appeal” and “Operation Christmas Child”run by Samaritan’s Purse” accept donated new products which are carefully selected for children of specific ages, who would otherwise receive nothing at Christmas

Robert has stated that apart from the usual generosity of the members of the Rotary Club of Normanton and other generous individuals in the area, some of whom had supplied and decorated their own shoeboxes, he has also had tremendous support from local churches and businesses, in particular, the local engineering company S E W – Eurodrive whose members embarked on a number of fundraising activities, raising £258 towards the costs, incurred by “Samaritan’s Purse” in transporting the gifts to the children involved.

This year, the volunteer Rotarians who collect the gifts on behalf of the “Samaritan’s Purse” charity, collected one hundred and fifty-four decorated shoeboxes and a further three large bags full of Christmas gifts, from Robert’s premises at 18 Market Place Normanton, along with £335 in cash which has been donated to assist in meeting the costs of transporting the gifts, ensuring that thousands of children who would otherwise have received nothing, will receive a very welcome Christmas gift.

more The final of the Quiz was held at the Village Hotel, Hessle

more Rotary York Ainsty organised a workshop in York Minster in which volunteers made feminine hygiene kits for girls in developing countries .

more Susie Morgan, Ripon Young Musician of the Year, proudly displays her certificate as a heat winner at the recent Rotary Young Musicians' Tournament. She takes her place in the final in Edinburgh next month.

more On a bleak morning in late January 2018 12 Rotarians, their partners and friends joined Roger Parkinson from the Woodland Trust to plant 150 native species trees at Shawcross.

more Hornsea and East Riding Rotary Club had the Archbishop of York, the Most Reverend and Right Honourable Dr John Sentamu as the guest speaker at a recent meeting.

more This year Hornsea Town Council has three Rotarians, from the Hornsea and East Riding Club as its “Chain Gang”. Keith Himsworth is the Mayor, his wife Hilary the Mayoress and Andrew Eastwood the deputy mayor!

more At a recent weekly meeting of the Rotary Club of Halifax, past DG Ken Robertshaw was presented with RI’s highest honour, the Service Above Self Award.

more Rotary Young Citizen Award winners are being interviewed on Afternoon Live with Simon McCoy on the BBC News Channel this week, leading up to the Awards Presentation with TV Presenter Ellie Crisell at the RGBI Conference on Saturday 7th April

more Headingley Rotary Club, assisted by several other clubs in District 1040, organised the raising of £8,000 in order to attract a global grant from Rotary International of $35,000 for Sylvia Wright's new Therapy Centre.

more A boat, funded by Rotary and built in Hull, will serve as a mobile medical clinic in Ghana

more April saw the 10th annual one third Hornsea Marathon. Almost 500 runners took part in this event. The main beneficiary of the run is Marie Curie

more At the Leisure Centre in Halifax schools from within Calderdale had a great day challenging one another to launch a missile into ‘the atmosphere’ and then safely return the rocket’s capsule back to terra firma!

more At a recent weekly meeting of The Rotary Club of Halifax, our local MP Holly Lynch was welcomed as an Honorary Member into its club.

more The first charity Ripon Rotary Bike Ride after taking over from Acorn was well supported on May 13th with over 600 riders. Dememtia Forward, Scleroderma Resaerch and Ripon Rotary charities will benefit.

more Rotarian Keith Twigg PHF of the Hornsea and East Riding Club has been awarded the East Riding of Yorkshire Chairman’s Community Individual Award at an awards ceremony in Bridlington.

more On Sunday 2nd July people flocked to the estate of Castle Carr to see its famous pressure fed fountain rise majestically well over 120 foot into the air.

more Former Rotary Scholar Daniel Smith and his wife Yasmin paid a short return visit to Leeds at the end of June, staying with Margaret and David Kirby.

more Residents in local care homes were recently taken on a tour of the daffodil sites in the area by some Club members.

more York Rotary Club have been running a Dragon Boat Challenge on the River Ouse for 14 years and raised over £940,000 for 170 York and Yorkshire charities. They expect that, with this year's event on July 9th, they will reach the £1000,000 mark!

more Ripon Rotarians have been working on the Fairy steps near Rustic Bridge, a local beauty spot

more Over 60 Rotarians and guests filled the dining room at the Wrygarth Inn for the Hornsea and East Riding Club’s 60’s night.

more If you're interested in a bike ride through the delightful countryside in North Yorkshire, while raising funds for local charities, the Ripon Rotary Bike Ride is for you!

more The Celebration of Youth Concert was in aid of Ripon Walled Garden and held at Holy Trinity Church. Harrogate

more The aim of this Scheme is to help some of Hull"™s talented young musicians flourish by developing their potential.

more The meeting of the Rotary Club of Sowerby Bridge on the 16th January was very special in that it celebrated 115 years of service to the club spread across three of our members.

more A number of new members joined the District in the New Year, with the Rotary Club of Halifax topping the list by admitting three new members on the same day!

more The kerb is opposite the Ripon Spa Hotel where the Rotary Club of Ripon hold their meetings.

more Club joined with Inner Wheel in holding a bbq for Tubakunde - a primary school in Rwanda - in Club President Robert Ankcorn's garden for 90 people.

more Ripon Rotary Choir were joined by the Mayor and Mayoress of Ripon while singing in the market square in aid of the Ripon Walled Garden on December 10th. Some appreciative and aspiring shoppers/singers also joined the group

more To mark the 200th anniversary of the birth of Charlotte Brontà«, the Rotary Club of Cleckheaton & District teamed up with their local museum to host a Brontà«s in Bloom Flower Festival.

more On Sunday 3rd July on the estate of Castle Carr in Halifax, its famous gravity fed fountain rose magnificently into the blue skies in aid of Rotary local charities.

more During August 2016 RC Holderness members are staging an exhibition of artwork at Hull Central Library, showcasing the artistic talent of students in Hull's schools and colleges.

more The Rotary District 1040 Yorkshire Flood Appeal which raised in excess of Â£100,000 has just made a donation of Â£5000 to Seagulls, a Leeds based Social Enterprise, following a successful application made by the Rotary Club of Leeds

more This year the award went to Christina Stuart

more The Rotary Club of Leeds has just celebrated its 100th Birthday.

more A low cost sustainable farming project has transformed a school with 1065 pupils and the surrounding community.

more The invitation to this event promised "˜an evening of music and mouth-watering treats"™, which was a bit of an understatement: those Rotarians able to get to Roundhay School last Tuesday evening were rewarded with a feast, both gastronomic and musical.

more The 2015 7th Annual Rotary Dragon Boat Challenge on Pugneys Lake on Saturday July 11 proved to be a stunning success once again.

more I will add photos of the District handover as I receive them.So please send some!This one was sent by Colin Perrott, courtesy of York Press.