Rotarian Jonathan Stephens, Past President of Rotary Usk has recently returned from Delhi, India where he was part of a team of UK Rotarian volunteers helping administer the polio vaccine to children as part of Rotary International’s End Polio initiative. 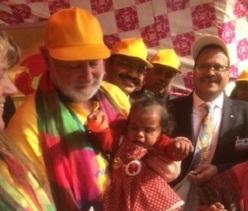 On Immunisation Day, Jonathan and two other UK Rotarians manned a booth in the suburbs of Delhi.

“It was a rather carnival atmosphere,” says Jonathan “This was deliberate to draw in the children for immunisation”.

“After completing Polio Immunisation Day in India - I was working in the slums of Delhi, which was an incredible and challenging experience”

Rotarians and other volunteers go out twice a year to help Rotary clubs in the area reach as many children as possible. There are other regular vaccination events but these larger National Immunisation Days (NID) draw huge numbers of children and families. Visiting Rotarians have a curiosity value that attracts children in the slums and remote villages who do not meet many British people.

Although India is polio free the job is not yet complete. Rotary wants to keep India’s children safe from polio and will keep immunising every child to spare them from a life of disabilities and pain.

The immunisation drive is part of Rotary’s End Polio Now campaign. Thanks to Rotary’s efforts, the number of endemic countries has dropped from 125 to three: Afghanistan, Nigeria and Pakistan. India has been declared polio free but there is always the threat of re-infection from migrant workers and people seeking refuge from war-torn countries who may be carrying the virus and it is critical to maintain ongoing high levels of vaccination take up.